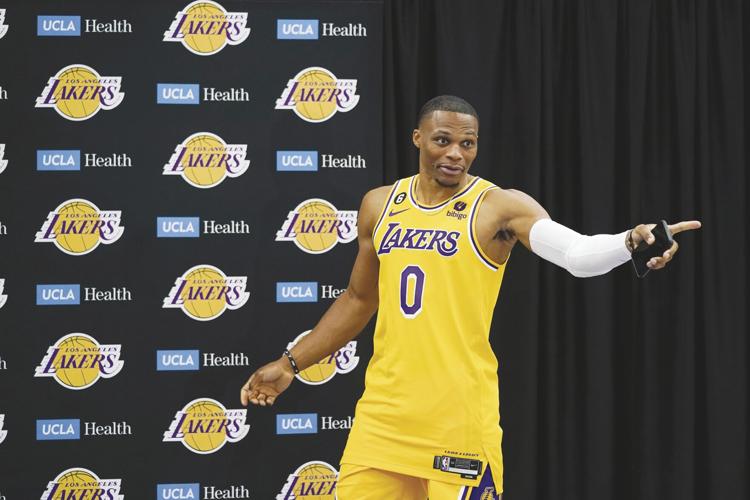 The Los Angeles Lakers’ Russell Westbrook arrives for a news conference at the team’s Media Day, Monday, in El Segundo. Westbrook returns to the Lakers after an offseason full of trade rumors. 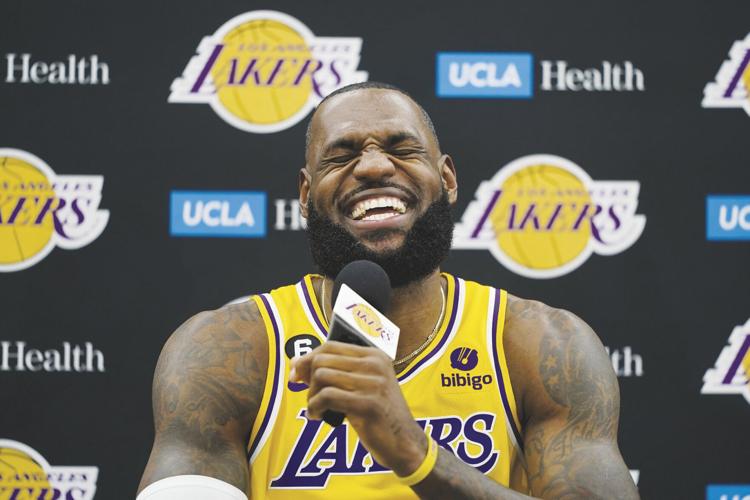 The Lakers’ LeBron James laughs while listening to a question during the team’s Media Day, Monday, in El Segundo.

The Los Angeles Lakers’ Russell Westbrook arrives for a news conference at the team’s Media Day, Monday, in El Segundo. Westbrook returns to the Lakers after an offseason full of trade rumors.

The Lakers’ LeBron James laughs while listening to a question during the team’s Media Day, Monday, in El Segundo.

Westbrook’s return to the Lakers is among the biggest surprises to come out of an eventful NBA summer — and nobody knows for certain how long it will last given the trade rumors still swirling around the 2017 MVP.

But Westbrook and his fellow Lakers — even Patrick Beverley, his former nemesis — are determined to make it work after it decidedly did not during his first season back home in LA.

“Whether they want me here or not doesn’t really matter, honestly,” Westbrook said. “My job is to be a professional. Show up to work like I’ve always done thus far. Do my job to the best that I know how to, and that’s it. We all have jobs that sometimes people at our jobs don’t like us and don’t want us there, as you (reporters) could probably attest.”

LeBron James, Anthony Davis and Westbrook are back to try it again after they managed to play in only 21 games together last season. Injuries to James and Davis were the primary factors in the Lakers’ dismal 33-49 campaign, but Westbrook’s inability to mesh with his new teammates and coach Frank Vogel’s concepts was another harbinger of disappointment.

Westbrook’s 18.5 points per game were his fewest since his second NBA season 12 years earlier, and his 7.1 assists were well off his best seasons. While his field goal percentage was decent on paper, Lakers fans became infuriated by his struggles with mid-range shots or from distance as he made only 7.0 field goals per game — again his worst performance in 12 years.

General manager Rob Pelinka didn’t deny he has explored ways to move Westbrook and his massive salary. He also praised the high-scoring guard for his offseason work and his growing bond with Darvin Ham, who got his first head coaching job in part because of his determination to get Westbrook into roles he can play.

“He’s all-in to do whatever it takes for this team to win, in whatever role that means,” Pelinka said of Westbrook. “I think coach Ham is going to bring another level out of him that we didn’t see last season.”

Ham reiterated his strong support of Westbrook and praised the guard’s offseason commitment to teamwork and improvement. He also praised the relationship between Westbrook and Beverley, whose public sparring over the past several seasons left some NBA observers thinking they couldn’t possibly be teammates with the Lakers.

That’s all nonsense, according to Beverley, the pugnacious veteran guard who joined the Lakers in a trade last month.

“If I had to pick a best friend out of the team, and you usually have those, it would be him,” Beverley said. “Obviously, you guys think that we have the worst relationship in the world, and at times on the court, just like in a profession, I know a lot of you guys don’t like each other, either. You guys aren’t the best co-workers, so it’s that same vibe. But when you get two people who love winning, two alpha males, and you put them together it usually works. I’m super-excited to see how it goes.

“In order to get to where we’re going, (the Lakers) have to become great friends, so I’m super-excited about that.”

While Westbrook’s future remains somewhat uncertain, James is back for his 20th season with Kareem Abdul-Jabbar’s career scoring record in sight this winter. The superstar also agreed to a two-year, $97.1 million contract extension through the 2024-25 season, and James said he’s “committed to the franchise for as long as my career, as long as my contract is.”

Davis is also back at full health after a round of injuries that have forced him to miss more games than he has played in the past two seasons. While Davis’ absences are the single biggest reason for the Lakers’ mediocrity during that span, he is encouraged by the offseason roster makeover that provided LA’s Big Three with a fresh supporting cast.

“It’s totally different from last year,” Davis said. “We had a lot of vets, and this year we’ve got guys we kind of need to speed up and help out. I’m excited for these young guys to learn, and they’re going to bring the energy out of us. Last year, we were a little slower. These guys are going to be running, and it’s going to push us to play at their speed.”

Ham’s Lakers will ramp up slowly to full capacity in training camp: German guard Dennis Schröder could miss the first week while sorting out normal visa issues, while new signees Troy Brown Jr. (back) and Lonnie Walker IV (ankle) will be limited early in workouts. Point guard Kendrick Nunn, who missed all of last season with a bone bruise, is fully healthy.