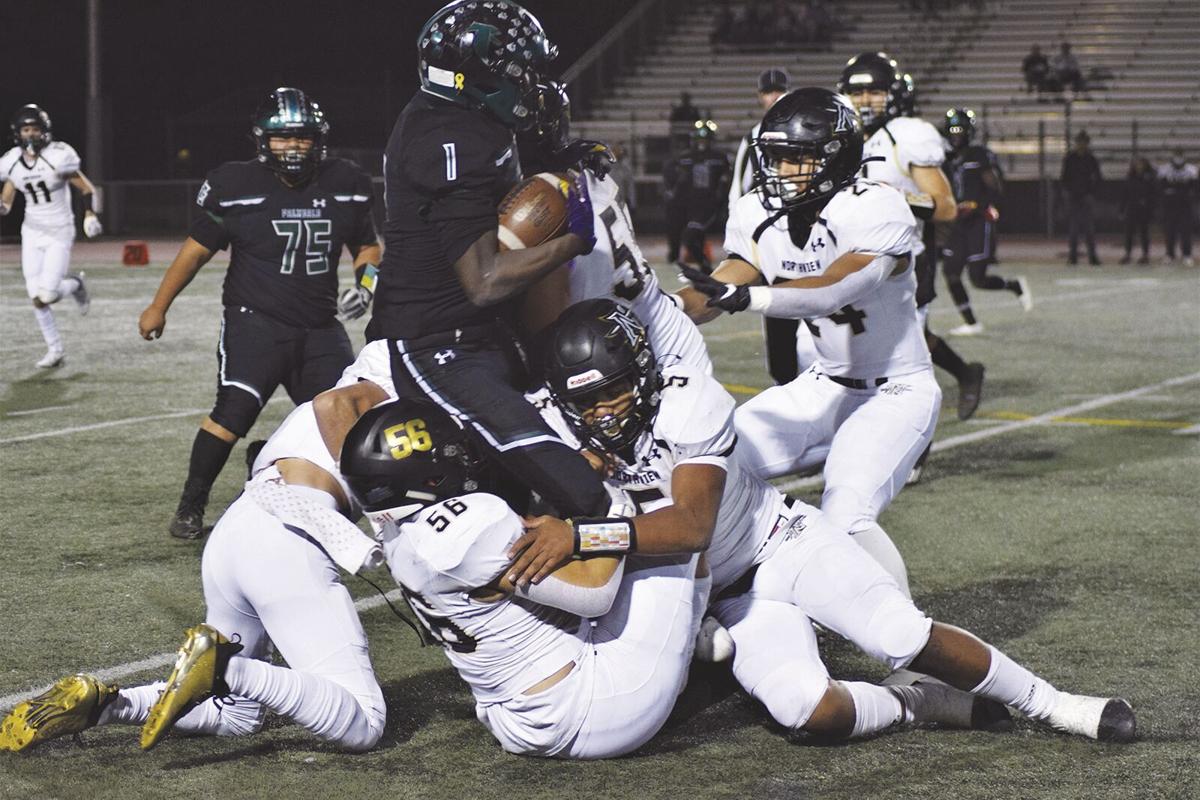 Palmdale’s Anthony Woods (1) is tackled by a host of Northview defenders, including Adrein Gonzales (56) in the CIF-Southern Section Division 10 semifinals on Friday. 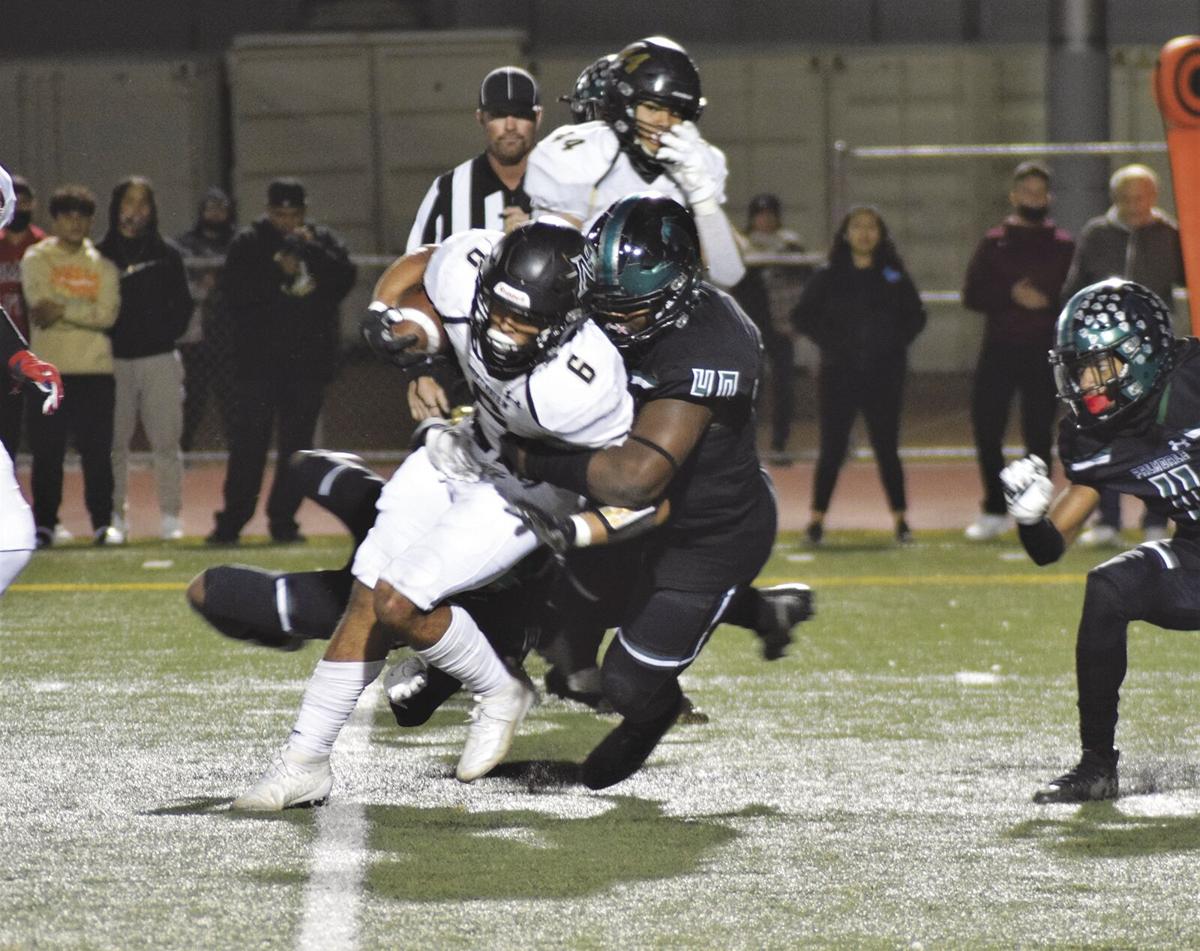 Palmdale’s Anthony Woods (1) is tackled by a host of Northview defenders, including Adrein Gonzales (56) in the CIF-Southern Section Division 10 semifinals on Friday.

PALMDALE — It wasn’t supposed to end this way.

Not as the CIF-Southern Section Division 10’s No. 2 seed and not after beating Covina 58-13 last week in the quarterfinals.

This was supposed to be the year Palmdale High School would return to a CIF-Southern Section Championship game for the first time since 2007.

However, Northview of Covina used a strong running game and an equally strong defense to upset Palmdale 28-14 Friday night at Palmdale High School. The Vikings (7-6) will face the winner of the St. Anthony-Salesian game next Friday.

The Falcons hurt themselves all night, losing four fumbles and committing penalties when it hurt the most.

For Palmdale coach Eric Nickols, the game came down to execution.

“You can’t turn the ball over four times and expect to win,’’ the fifth-year head coach said. “We tried not to get caught up in the hype. First- and second-round playoff wins are nice, but the real playoffs begin in the semifinals. We just weren’t able to get it done.”

Unlike Palmdale, Northview had little trouble executing its game plan. The Vikings entered the game wanting to run the ball to keep Palmdale’s high-powered offense off the field.

Northview rushed the ball for 278 yards and 47 carries, while attempting only eight passes.

“This has been a crazy year with COVID and with injuries,” Northview head coach Marcel Perez said. “It took us awhile to get going as a team. But, we always felt like we had a championship-caliber team. And, our defense, has been doing that all year.”

In three playoff games, Northview’s defense has given up less than 14 points a game. The Vikings’ defense was especially tough in stopping Palmdale back Anthony Woods.

Woods was a one-man show in Palmdale’s first two playoff wins, rushing for 530 yards and nine touchdowns. The senior was unable to get into the end zone running the ball and finished with just 58 yards on 16 carries.

Northview wasn’t able to keep Woods out of the end zone altogether. Woods gave the home crowd a reason to be excited early into the second half, scooping up a Cheo Medina fumble and running it in for an 80-yard score. Kylen Gibson’s extra point kick was good, tying the game at 14-14 less than two minutes into the second half.

Northview regained the lead on their next possession by picking up a touchdown on a well-executed fake punt.

With Joseph Gutierrez back to punt, Northview motioned Steven Carlin to quarterback and he found a wide open Medina down the left sideline for the touchdown. Gutierrez converted the kick, giving Northview a 21-14 lead with 5:40 left in the third quarter.

“When they motioned out of punt, we should have called a timeout,” Nickols said. “That was a huge play and a momentum changer.”​

Trailing and unable to sustain drives running the ball, Palmdale was forced to turn to the passing game.

However, the Falcons were able to complete just five passes for 63 yards.

The Vikings put the game out of reach with just over seven minutes to play when Medina scored from six yards out, making the score 28-14. Medina finished with 128 yards on a 20 carries.

Northview opened the game with an impressive 43-yard kickoff return by Erik Saiz to get the ball to Palmdale’s 38-yard line. The Vikings ran six consecutive run plays, capped by a 1-yard scoring run by Ronal Tebo. Gutierrez converted the kick, giving Northview a 7-0 lead with 9:50 left in the first quarter.

Palmdale struggled moving the ball in the first quarter, failing to pick up first down.

While the Falcons struggled, Northview had little trouble running the ball in the opening half. Led by Tebo, Medina, and Saiz, the Vikings rushed for 151 yards on 29 carries.

Saiz gave Northview a 14-0 lead with 2:46 left in the half when he scored on an 8-yard run. Northview took advantage of Woods’ fumble and an unsportsmanlike penalty by the Palmdale defense to set up the score.

Palmdale finally got something going on their next possession when Kadin Newton hit Isaiah Mcintyre on a 42-yard strike for a touchdown with 1:13 left in the first half.