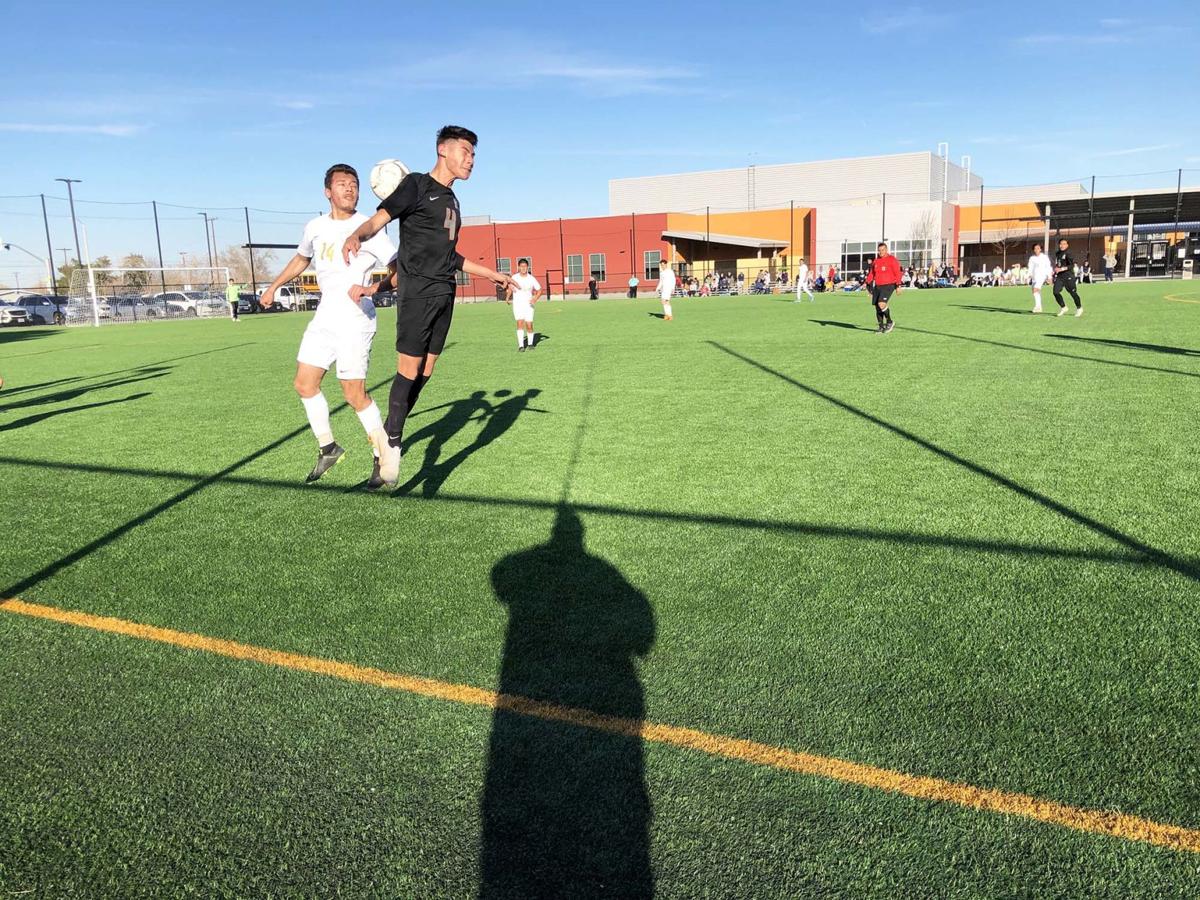 LEAPING — Palmdale Aerospace sophomore Carlos Mendez (4) jumps to head the ball against an Aquinas defender during a first-round playoff match on Wednesday at Palmdale Aerospace High. Mendez scored the first goal in the Griffins’ victory. 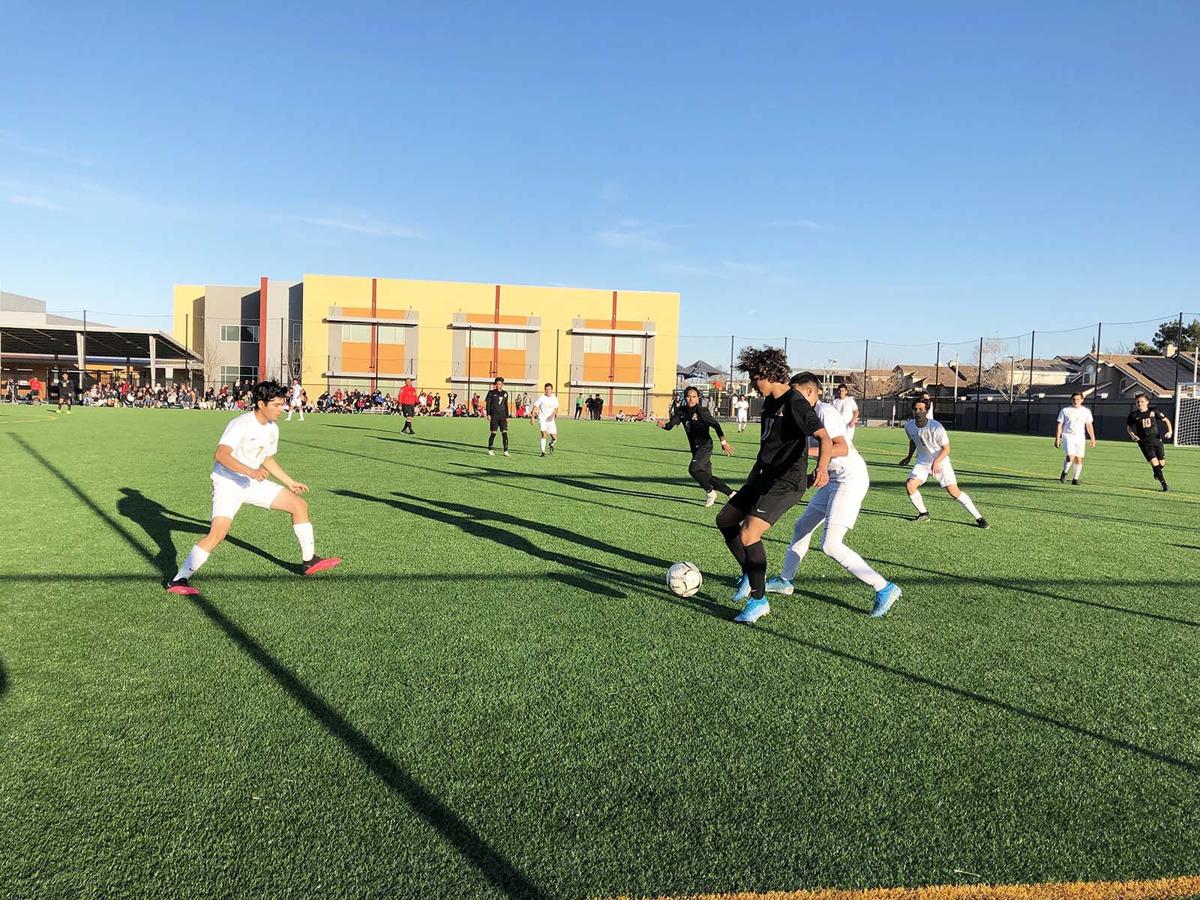 LEAPING — Palmdale Aerospace sophomore Carlos Mendez (4) jumps to head the ball against an Aquinas defender during a first-round playoff match on Wednesday at Palmdale Aerospace High. Mendez scored the first goal in the Griffins’ victory.

PALMDALE — The Palmdale Aerospace Academy boys soccer team had a strong start to its playoff opener on Wednesday afternoon.

A two-goal advantage proved to be enough against Aquinas in a 2-1 Griffins’ victory in a CIF-Southern Section Division 6 first-round game at the Palmdale Aerospace Academy High School.

“The beginning is where it counts,” Palmdale Aerospace sophomore Carlos Mendez said. “If you get an early lead, it will help you out throughout the game. It kind of makes it comfortable. That can also be a problem as well. A team gets too comfortable, everyone loses their guard and stuff like the first goal against us happens.”

Mendez scored from five-yards out in the third minute for the Griffins, redirecting a free kick by sophomore Alvaro Paniagua from 40 yards out.

“It was a tough game. I feel we could have put more effort into it,” Mendez said. “We played good, but at the end of the day, it wasn’t enough for us. There were lots of opportunities that should have and would have gone in to make the game easier. It would have helped a lot.

“It’s a little bit of nerves, starting off playoffs. The recovery. All the boys getting cramps. There’s not enough recovery in the team. But I feel that overall, that should be an easy fix and we’ll be ready for the next round.”

The Griffins had an apparent goal by junior Nathan Alvarez-Quevado from five-yards out in the sixth minute disallowed when he was ruled offsides.

Alvarez-Quevado was ruled offsides on two more plays in the first 10 minutes.

“We slowed down,” Palmdale Aerospace coach Luis Hernandez said. “The boys are complaining about being tired, but the first 15 minutes we were on them. On them. There were three goals that should have been goals, but were called offsides. We had so many chances that it should have been 5-0 within 20 minutes. We slowed down. It’s the first time I’ve seen them do that all season. We’ve got to figure it out. We’ll give them a day of rest and see what they do on Friday.  We’re a go, go, go team. We’ve got to keep going. We can’t slow down.”

Palmdale Aerospace did score in the 18th minute, as senior Chris Vasquez scored from five-yards out to give the Griffins a 2-0 lead.

“We played a good style. We could have done better, but we advanced and that’s good,” said Vasquez, a four-year varsity player. “We feel that we could have had more communication and less injuries and more rhythm to the ball.

“They were a good team. We were shocked at first, but we got through it and we were able to win. We were confident. The first half we got too comfortable and they were able to get a goal in.”

“I think we played really well, slowed down a little bit in the second half, but the boys were defensively sound. That got us the game,” Hernandez said. “We had heard of them two years ago, when we were supposed to play them, but then we lost to Mojave. They were good back then and won it that year, in 2018. So I knew they were going to be good. I kept telling the boys ‘It’s the playoffs, so every team is going to be tough.’ Sure enough, they came out here and gave us a really good game. They gave us a run for our money, but our defense just held them. The defense did a great job.”

Aquinas won the Division 7 championship in 2018, beating Mojave 2-0 in the quarterfinals.

Palmdale Aerospace beat Big Bear 10-1 in the first round last season, but lost to Thacher, 4-2 in the second round. Thacher advanced to the championship match, losing to San Dimas 5-4 for the title.

The Griffins also prepared for a tough postseason, by winning the San Gabriel Valley Tournament in the preseason.

“When we went to the San Gabriel Valley Tournament, we faced a lot of Division 6, Division 5 teams,” Hernandez said. “So the boys are used to playing teams like this, but it’s just been so long. It’s been so long since we’ve been playing tough teams, because our league is kind of slow. The boys know how these play competitive games. We just have to wake them up and get them back to it.”

“That’s a pretty big deal, because some of the best teams from San Gabriel Valley were there, D5, D6 teams. So it’s not like we don’t know how to play big teams, we just have to wake them up and remind them what it’s like.”