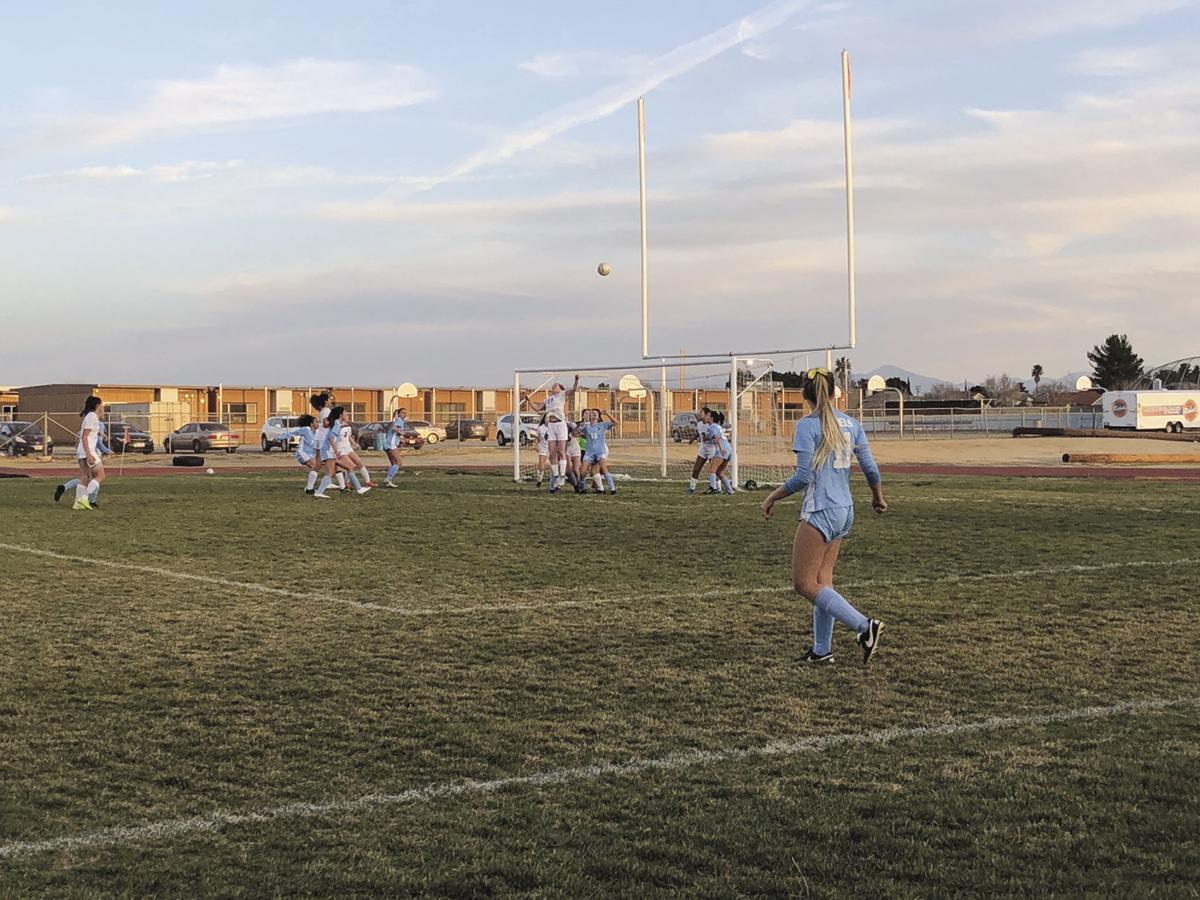 PERFECT THROW —Quartz Hill junior Michelle Hess watches as her throw-in travels to the goal in a CIF-Southern Section Division 3 First Round game against Windward on Thursday. The Rebels scored three goals on Hess’ throw-ins in a 7-0 victory. 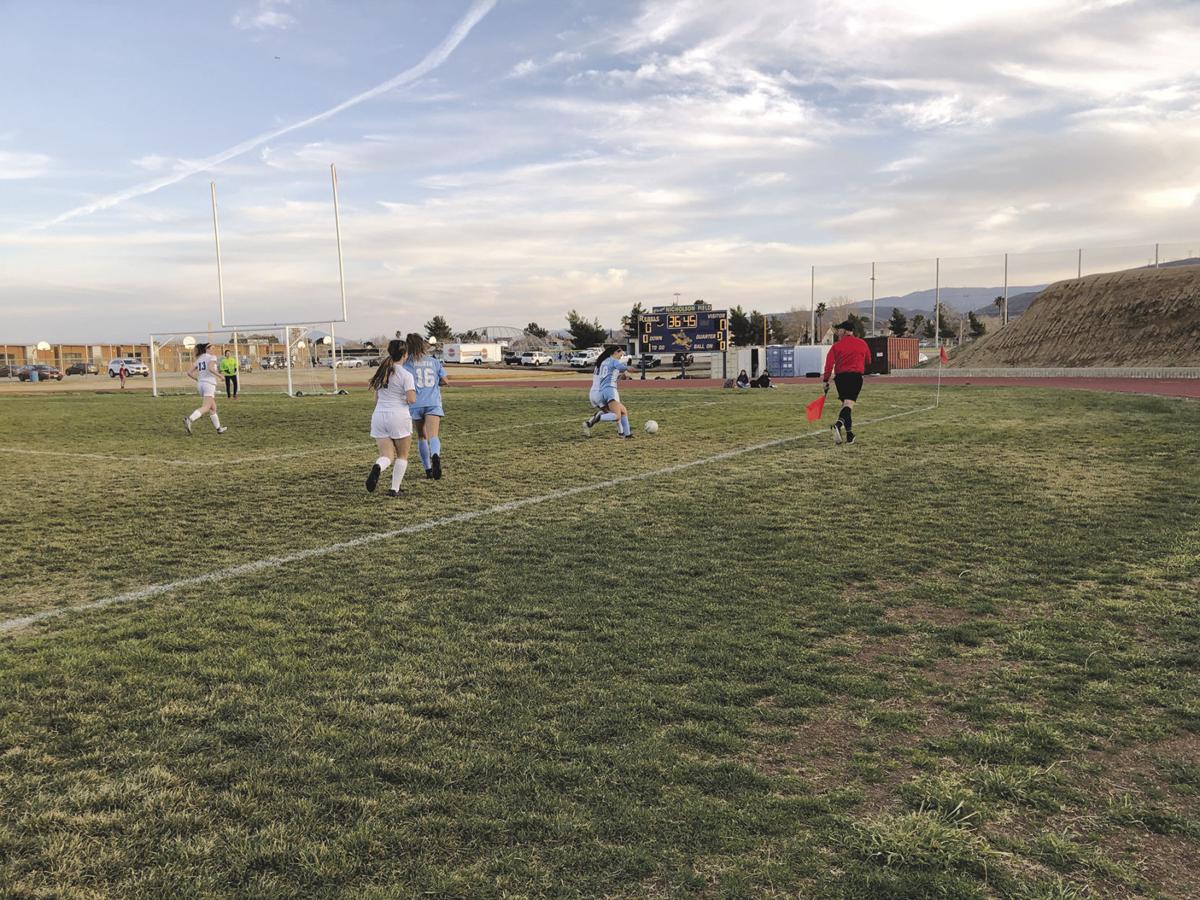 GETTING THERE —Quartz Hill senior Emily Serrano (10) battles for the ball against a Windward player on Thursday. Serrano scored three goals in the Rebels’ 7-0 playoff victory.

PERFECT THROW —Quartz Hill junior Michelle Hess watches as her throw-in travels to the goal in a CIF-Southern Section Division 3 First Round game against Windward on Thursday. The Rebels scored three goals on Hess’ throw-ins in a 7-0 victory.

GETTING THERE —Quartz Hill senior Emily Serrano (10) battles for the ball against a Windward player on Thursday. Serrano scored three goals in the Rebels’ 7-0 playoff victory.

QUARTZ HILL — The Quartz Hill girls soccer team was able to score effectively off of set plays on Thursday night in its playoff opener.

The Rebels scored three goals off of throw-ins by junior Michelle Hess and two more goals on free kicks by senior Cassie James in route to a 7-0 victory over Windward in a CIF-Southern Section Division 3 first-round game at Quartz Hill High School.

Quartz Hill (14-2-1) will play at No. 1 seed Flintridge Prep in a second-round game on Saturday. Flintridge Prep defeated Santa Barbara 3-2 in overtime in the first round on Thursday.

“We worked very diligently on our set pieces and throw-ins being one of our set pieces that’s very effective for us,” Quartz Hill coach Charles Gordon said. “We were able to create numerous opportunities off that this evening.”

“We played really well together,” said Serrano, a second-year varsity player. “I think it started in warmups. We communicated. Our intensity was very high and our communication was high as well and that played a big part in our game.

“Our chemistry is really good. Our girls, we love each other. We communicate. We played together well. I think it was our preparation, in the week leading up to it. Our coach, our practice, our drills, everything leading up to the game.”

The Rebels missed an opportunity in the second minute, on a throw-in by Hess that she placed right in front of the goal.

Hess had five throw-ins deep in Windward territory that she was able to place right in front of the goal. The Rebels capitalized on three of those plays.

Quartz Hill scored its first goal in the fifth minute off a throw-in by Hess from the 12-yard line, with James chipping in the ball.

“I feel very amazed of our accomplishments and how far we’ve come from the very first season game to the CIF playoff first-round game,” James said. “The biggest change is the love and the value of how we come out here and just work hard six days a week. Just play, play, play and have fun.

“The key was the communication and the reach of our wides coming through to the middle and also some of the set pieces to goal, just all around love and energy of the team.”

After the Rebels missed a chance on a throw-in in the 10th minute, Quartz Hill scored on another throw-in by Hess in the 11th minute.

Serrano headed in the throw-in for the goal and a 2-0 lead.

“I’ve just always had a long throw,” said Hess, a third-year varsity player. “I was really trying in warmups. I got stretched out by coach. They were as far as I’ve seen for a while.

“It’s satisfying to see it pay off for us. It shows us that we can do it, but we still have hard work to go and we can’t stop.”

Serrano scored in the 19th minute, redirecting a pass from five yards out.

James gave the Rebels a 4-0 lead in the 21st minute on a free kick from 25 yards out, hitting the top of the net just above the leaping Windward goalkeeper.

Quartz Hill scored on a third throw-in by Hess in the 38th minute, with Serrano capitalizing on the set piece to give the Rebels a 5-0 halftime lead.

“I think that we played with high intensity. It was our preparation,” said Hess. “We worked as a team, not alone, and we worked hard.

“It wouldn’t be without everyone though. If we didn’t have everyone working for each other, none of that would happen.”

Respeto scored minutes into the second half.

Windward sophomore goalie Kyra Bishop challenged Respeto, but she did not secure the ball and Respeto chipped in the loose ball from five yards out for the goal.

James capped the scoring for the Rebels with a goal on a free kick in the 50th minute.

James took the free kick from eight yards out, near the home sideline. She hit the far, top corner over a leaping goalkeeper to give the Rebels a 7-0 lead.

“I’m extremely happy for the girls,” Gordon said. “They battled from the opening whistle and never wavered all game.

“Our transition. Tonight our transition was stellar. The girls had a lot of energy. They did a very good job with team defense and were able to combine and get lots of numbers around the ball on offense.”

Quartz Hill sophomore goalkeeper Katie Crees had the shutout for the Rebels, but she faced only a few shots as the defense in front of her helped stifle the Wildcats (9-4-4), the second-place team from the Gold Coast League.

Windward senior Olivia Venit had one of the best opportunities for the Wildcats, hitting the crossbar on a free kick from the 12-yard line in stoppage time at the end of the match.

Quartz Hill was dropped from Division 2 last season and enters the playoffs having won the Golden League title. The Rebels shared the league title with Eastside two years ago and won 10 straight outright from 2008 to 2017.