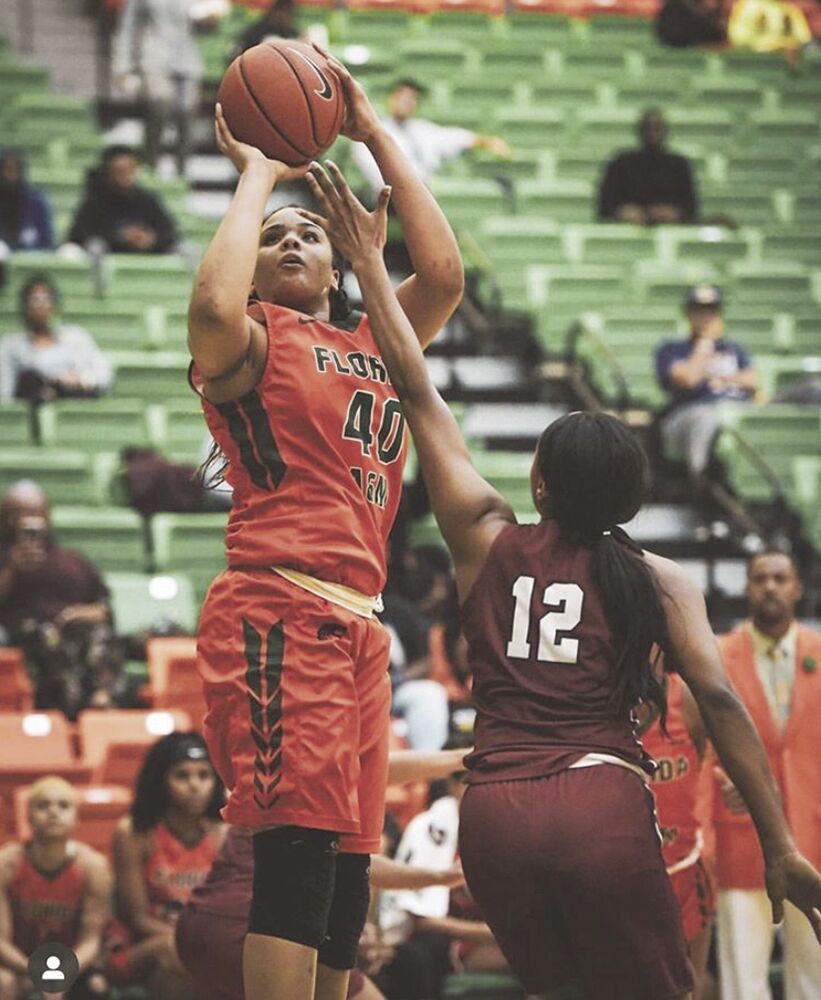 FOCUSED — Former Knight High standout Shalaunda Burney-Robinson takes a shot during a game with Florida A&M. Burney-Robinson completed her Masters’ Degree in community psychology in the spring and will be taking her talents to the Czech Republic to play professional basketball. 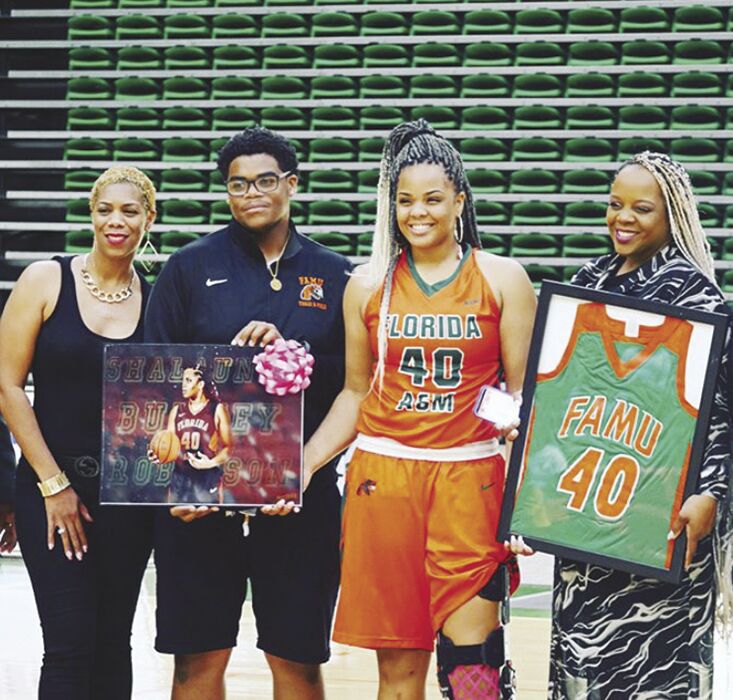 FOCUSED — Former Knight High standout Shalaunda Burney-Robinson takes a shot during a game with Florida A&M. Burney-Robinson completed her Masters’ Degree in community psychology in the spring and will be taking her talents to the Czech Republic to play professional basketball.

Growing up in Palmdale, Shalaunda Burney-Robinson always knew she wanted to travel the world. And she knew playing professional basketball could help her do that.

“In elementary (school) I was going to play professional basketball and potentially play in the WNBA,” the 2014 Knight High grad said. “Growing up I learned overseas is more what I wanted to do with the traveling and basically you get paid to do what you love to do. Plus, I found out they get paid more than WNBA players, so I was like, ‘OK, that’s fine, too.’”

Burney-Robinson’s dream is becoming a reality this week.

The 24-year-old will be boarding a plane to the Czech Republic some time in the next week. There she will play women’s basketball on a one-year contract for KP Brno in Brno, Czech Republic.

“I don’t know much about it, but I do know that that’s somewhere I would like to be,” Burney-Robinson said about the Czech Republic. “I’m just excited to get there and start this new chapter in my life.”

There were a lot of twists and turns in Burney-Robinson’s story that made turning to the next chapter take a bit longer than she thought it would.

After a stellar high school senior season with the Hawks, Burney-Robinson earned a full scholarship to play basketball at Florida A&M University (FAMU) — the first player out of Knight to go straight to a Division 1 university.

In the prime of her sophomore season in 2015, she tore her ACL in her left knee during a home game.

She took a redshirt after having surgery to repair her knee and was able to recover from the injury.

Then, adversity struck again in 2018 during her senior season. This time, however, it was much worse. Burney-Robinson tore her ACL, MCL, LCL and meniscus in her right knee. The injury was also at a home game, on the opposite end of the court.

“It was everything, so it was harder to come back from,” Burney-Robinson said. “But both of them, I was at the peak of my career. I was doing really, really good and then that just brought me all the way back down to level one. I had to build myself back up and then I got brought down again. This is really building myself back up, going to play professional basketball.”

Having to come back from one knee surgery is hard enough, but two was devastating for Burney-Robinson.

“The first one made me really, really strong mentally. And then when the second one came, I was devastated,” she said. “I sort of went through a depression-type thing and then I just kind of got myself back up. I was like, ‘You can’t. There’s no way you’re going to give up.’ I just kind of pushed toward that.

“I had trainers, my teammates, coaches, my mom and prayer, for real, to help me out with that. If it wasn’t for God, I really would not be where I am today. He’s what really helped me out, really got me back.”

In her final season of college basketball, the center led the Rattlers in scoring (10.7 points per game), field-goal percentage (52%), field-goals made (116), rebounds (240) and rebounds per game (8.9). She also recorded 10 double-doubles, including a 26-point, 17-rebound performance in the season finale against Bethune-Cookman.

She played a total of 87 career games, finishing with 745 career points, 594 rebounds and 52 blocked shots.

As a result of her injuries, Burney-Robinson received two extra years of eligibility. After graduation with her Bachelor’s Degree in psychology in 2018, she used those two extra years to earn her Master’s in community psychology.

She plans on getting her doctorate in psychology either while playing overseas or after her playing career is done.

“Everything happens for a reason,” she said. “I want to be a counseling psychologist. I’m more like the big sister type to everybody, so I’m really good with problems, giving good advice and stuff like that. I’m always the first one people come to in my whole family. I feel like it’s just kind of embedded in my life, so why not make it a career?”

She didn’t get to go through her Master’s graduation because of the Coronavirus pandemic, but she was OK with that since she went through the ceremony for her Bachelor’s.

Burney-Robinson’s chance to play in Europe came after she signed with an agency who found her the opportunity.

She wasn’t sure she would be able to go because of travel restrictions due to COVID-19.

“At first it was a little rocky, not knowing if they were taking people from America going there,” she said. “But then everything worked out.”

The only other glitch is that her high school sweetheart of more than seven years, Kortecee Baker, whom she refers to as her husband, won’t be able to go with her has planned. The country is currently only accepting working visas.

Burney-Robinson and Baker both played sports at Knight High, before going to separate colleges. But Baker later transferred from Iowa to FAMU and they both graduated from there.

“I told my agent, basically, I’m not going unless I get a plus-one ticket for my husband to come,” Burney-Robinson said. “He was like, ‘Yeah we can do that,’ and I was like, ‘Great!’ But, they’re not taking tourists right now, only if you have a visa to work. So, I was like, ‘OK, it’s fine.’ I’ll just come back home for Christmas for two weeks and see my family.

“It’s cool, it’s only four months. We did the long-distance relationship thing before in college, so it’s going to be the same. … It’s just like college, basically.”

After two weeks at home for Christmas, Burney-Robinson will head back to the Czech Republic until May. Things could possibly be different by then and maybe Baker can join her.

Even though she won’t know anyone there, Burney-Robinson is more excited than nervous for the opportunity. She said the coach speaks English and there are street signs in English, so she’s hoping the language barrier won’t be too hard to overcome.

KP Brno finished second in its league last season with a 17-6 record. The new season is set to begin Sept. 26.

This will be her first time out of the country and with downtime during the season, she will have a chance to explore other countries nearby. Her new team also travels outside the country to play games.

“This has been a dream since I was a little girl, so I’m very excited about that,” Burney-Robinson said.

She will be documenting her travels on her YouTube channel, JUST Lala, and her Instagram page, Just.Lala40.

“I started a YouTube just for memories,” Burney-Robinson said. “Especially, my family likes to keep up with me, so that will be one way to help. My Instagram is always like a whole vlog itself. … It’s a social photo album with videos.”

Part of what has helped Burney-Robinson accomplish her goals is writing them down, which is something her mother, Shalaunda Byrd, taught her and her five siblings.

Byrd had each of her children find a Bible verse that related to them and asked them to write down what they wanted to accomplish. Then, they prominently featured them on a wall.

“I still do, to this day,” Burney-Robinson said, adding she puts her list by her front door. “It’s something you see every single day and you notice it. When your list is all checked off, you make another one.”

Burney-Robinson has checked off a lot of goals in her young life and will have another to check off this week. She’s glad she didn’t give up when no one would blame her for doing it.

“Don’t ever give up on yourself,” she said. “You know what you want to do, so go for it. Always keep God first.”

Growing up in the Antelope Valley, Burney-Robinson knows it can be hard to move on from the area and accomplish your goals. Her advice is that your mentality needs to be 10 times stronger than your physicality. If you don’t think you can do something, you won’t. But if you believe you can do it, you will.

“Push yourself! Push yourself until you feel like you can’t go anymore, and when you reach that level of weakness and fatigue, push even more,” Burney-Robinson said. “That’s when you will develop new strength, not only physically, but mentally as well.”