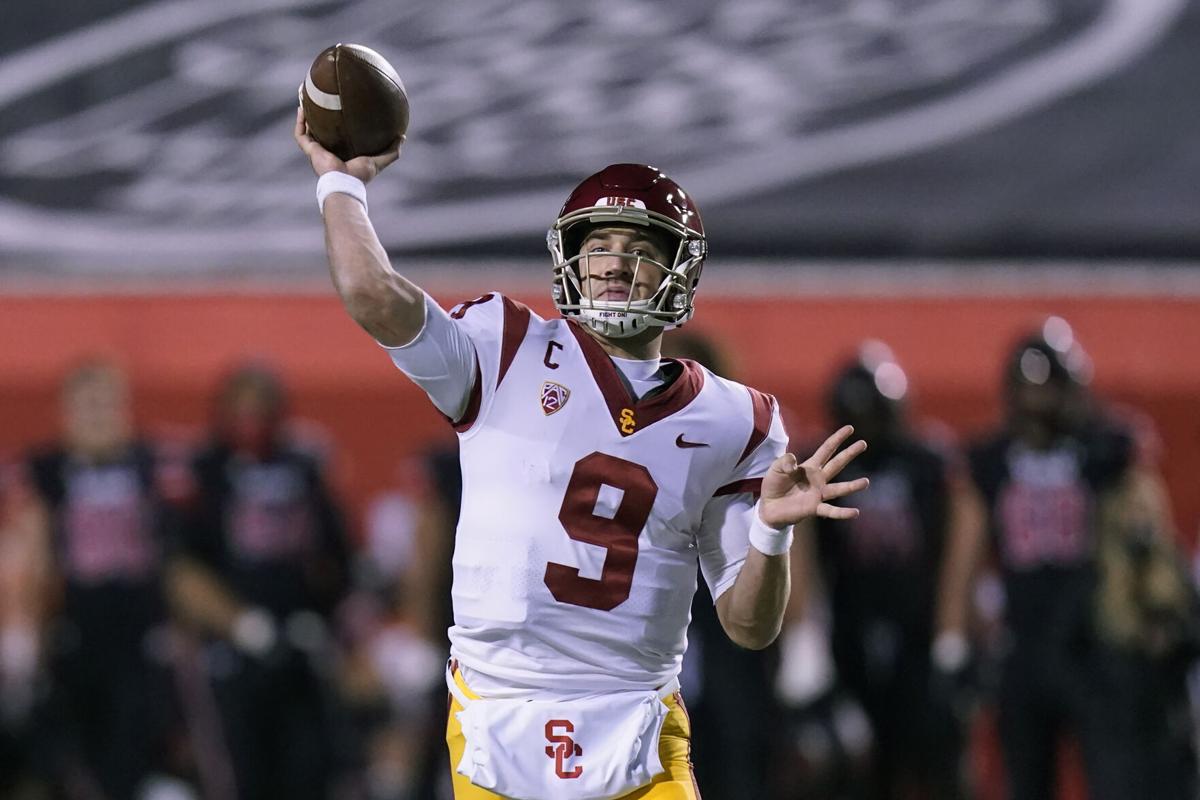 THROW — Southern California quarterback Kedon Slovis throws a pass during the first half of the team's NCAA college football game against Utah on Saturday, Nov. 21, 2020, in Salt Lake City. 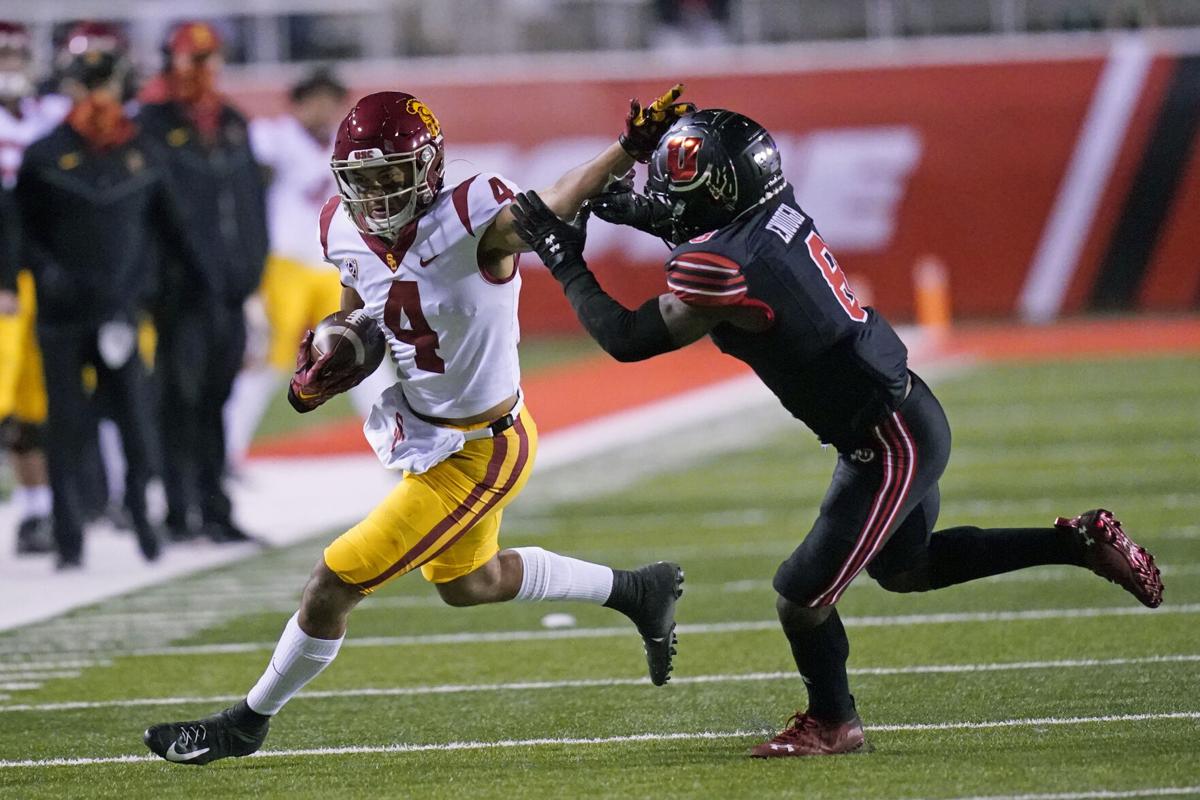 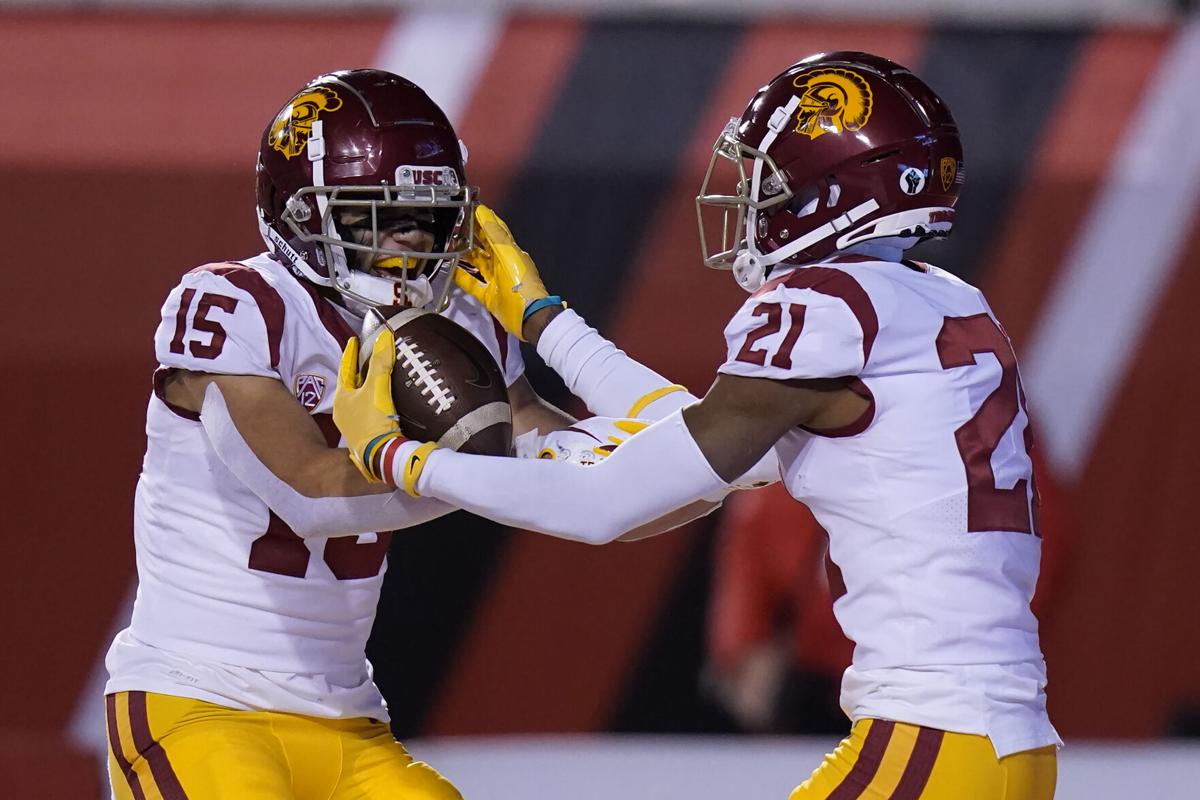 TD — Southern California's Tyler Vaughns (21) celebrates his touchdown against Utah with Drake London (15) during the first half of an NCAA college football game Saturday, Nov. 21, 2020, in Salt Lake City.

THROW — Southern California quarterback Kedon Slovis throws a pass during the first half of the team's NCAA college football game against Utah on Saturday, Nov. 21, 2020, in Salt Lake City.

TD — Southern California's Tyler Vaughns (21) celebrates his touchdown against Utah with Drake London (15) during the first half of an NCAA college football game Saturday, Nov. 21, 2020, in Salt Lake City.

Slovis completed 24 of 35 passes for 264 yards for USC (3-0, 3-0 Pac-12), but the Trojans' defense took centerstage, forcing five turnovers to stay undefeated and move into pole position for the Pac-12 South title.

Utah (0-1, 0-1) was the final major conference team to make its 2020 debut after coronavirus cases scuttled its first two scheduled games of an already delayed season.

The long layoff didn't do the Utes any favors as they made critical errors and couldn't get any rhythm going on offense. Consistent quarterback pressure by the Trojans and a rugged rush defense had a lot to do with that.

Cameron Rising, a Texas transfer, made his first start for Utah but threw an interception in the first quarter and then was strip-sacked by Marlon Tuipulotu for his second turnover and got injured on the play. Vavae Malepeai scored on a short run one play later to give USC a 10-3 lead.

Jake Bentley, a graduate transfer from South Carolina, replaced Rising but was often off target. After two negative-yard drives and misfires on his first four passes, Bentley used a 33-yard run to spark the Utes' offense and capped the half with a 7-yard touchdown strike to Samson Nacua. USC led 24-17 at halftime.

The USC defense, led by Kana'i Mauga's 11 tackles, harassed Bentley and kept Utah scoreless in the second half. After two comeback wins, USC's first victory in Salt Lake City since 2012 ended without much drama.

In the second half, USC engineered three drives that concluded in Parker Lewis field goals. The defense did the rest.

The Trojans didn't look particularly polished themselves and didn't have a bevy of offensive fireworks. Maxs Tupai sacked Slovis, and Nephi Sewell scooped up the fumble and took it 23 yards for Utah's first touchdown.

Slovis hit Tyler Vaughns for an 8-yard score after a 42-yard completion to Vaughns that finally got the Trojans' offense rolling.

On a run-pass option, Slovis threw a 10-yard touchdown to Erik Krommenhoek for a 24-10 lead.

The Utes have annually featured one of the Pac-12's top defenses, but they had to replace nine defensive starters from last season. Surprisingly, it was the lack of offense that scuttled any upset bid.

After winning their first two games by a combined five points, USC's 16-point victory will look good to voters and the Trojans should rise in the rankings.

USC: The defense looked stout. The offense still hasn't reached its potential and the unit struggled to run the ball, but the passing of Slovis was plenty good enough. USC has two home games and a visit to crosstown rival UCLA remaining, setting up the Trojans for a big finish to this shortened season.

Utah: The Utes were worried about a really young defense, but the offense's inability to move the ball and the five turnovers doomed Utah.