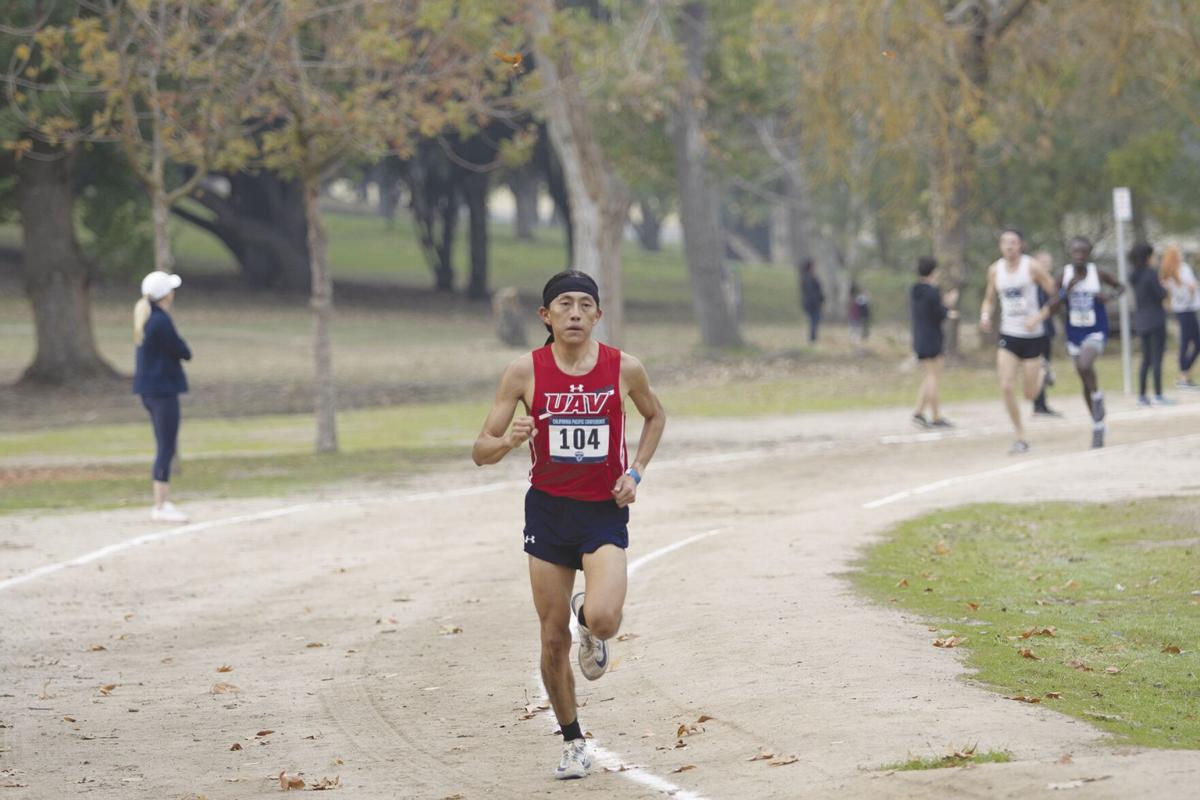 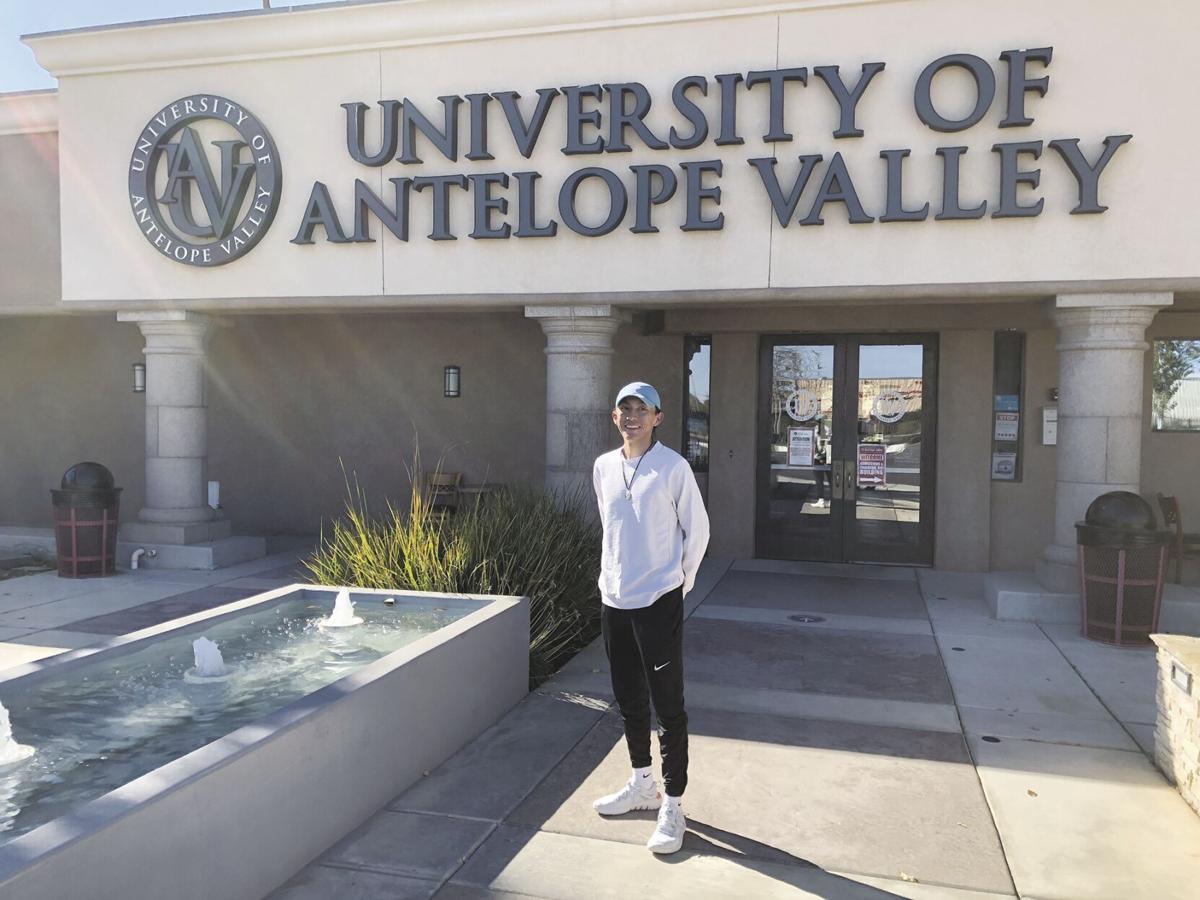 Hardy has battled leg injuries since he started running cross country in high school and felt like stepping away from the sport in high school and again after two years of competing at Central Arizona Community College in his home state.

Now after competing at UAV for two years, the senior has won five consecutive races, including the California Pacific Conference championship, and qualified for today’s national championship in Vancouver, Washington.

In winning the Cal Pac championship, besting the Cal Pac record by 10 seconds with a time of 24 minutes and 56 seconds on the 8K course, he earned Cal Pac Runner of the Year honors.

He broke the record at the Titan Invitational in Fullerton during his streak, taking more than a minute off his PR with the second-fastest time in the NAIA this season.

“Right now, it’s like I’m on cruise control. Maybe once Nationals is over I’m going to look back on the season and reflect on it. It’s really something to look back on, especially being Native American, they don’t really get that much upholdings. It’s really big for my community back home, but to me being out here in a bigger world, it’s kind of like a small dent. But it’s impacting the community back home, which is a really good thing.”

Hardy, 23, grew up on Navajo Nation the second youngest of six siblings in Northeastern Arizona and did not initially like running.

“I literally hated running,” Hardy said. “I did like Little League baseball and basketball and that was pretty much all I did, but I never really got my mind set on running as a profession.

“As I was growing up, we had livestock and we would let them graze in the field area. Me being the oldest of our little family, they would always tell me to run out and chase the cows back. To me, I didn’t know what a mile was, so maybe it was like six miles. That far of a distance looked like a mile. For me as a little kid, I did what I was told, so I chased them back. That was the only form of running I’ve actually done growing up. Other than that, it was either basketball, running up and down the court, or baseball, running the bases. I didn’t really get into running until my eighth-grade year. I only used running to chase livestock and to stay in shape for other sports, so I wasn’t really a big runner back then.”

Hardy said he started running in the eighth grade, as the third or fourth person on the team.

He said he began trying his best at running his freshman year of high school, but was still not one of the top-ranked runners on his team and still looked at cross country as a fallback sport.

“I wanted to do baseball, but being a skinny kid trying to do baseball, it was hard to fit in with other baseball players. I didn’t really fit in, so it was kind of hard to do baseball,” Hardy said. “I still continued to run, because it was something that I knew. It was something I fit in with other people. I genuinely didn’t have that many friends on the running team. As soon as I started getting a little better in running and having a lot more personal success, such as running PRs and contributing to the team, I started gaining acknowledgment from the team. It was something I was feeling a lot more comfortable with. Sophomore year, I didn’t know where to take running with, because I had shin splints and I didn’t know how to deal with shin splints. It was kind of hard feeling that personal pain, because I don’t know how to deal with it.”

Hardy said he thought maybe shin splints were a sign that running wasn’t for him.

“The next year, junior year, I didn’t want to do running,” Hardy said. “I did have a few teammates on the team telling me to run. ‘You’re going to help us win state.’ Because we were destined to win state my junior year. I did it again and won my first meet in trainers, basically. I didn’t expect to win. Maybe it was a one-time thing, winning a race. So I didn’t expect to win the next race, but I won the next race. I won three or four races after that. But when it came down to Phoenix, Arizona, which was much more competition, I didn’t win, but I did my best. It’s nice to feel in the pack again. It’s nice to run with someone who’s a lot more faster than you. Feeling that made me want to do the sport more. That win-or-lose mindset.”

“My junior year of state, I didn’t expect to win that race, actually,” Hardy said. “I pretty much ran my heart out to find myself winning that race. It didn’t hit me until beginning of my senior year. I had to come back and defend that title. That whole summer I was working and training to be better. Definitely senior year was a lot more pressure, because people expected a lot out of me, being the No. 1 guy on the team. I trained a lot. I trained my hardest. I won state again.”

Hardy also had an unexpected victory in the Shiprock Marathon in New Mexico in 2017, with a winning time of two hours and 39.14 minutes, which qualified him for the Boston Marathon.

Hardy then attended Central Arizona Community College, but suffered a series of injuries during his two seasons there, starting with a left quad strain his first year.

“I didn’t perform as well as I was supposed to at that Nationals and we took second as a team,” Hardy said.

Hardy said during the track season he got a right quad strain and redshirted the season.

The team won cross country nationals his sophomore season, but he got a stress fracture in his left shin during the track season in the spring.

“I was excited for track season, because I did qualify for Boston,” Hardy said. “At the end of my senior year, I ran the Shiprock Marathon, which is pretty close by to my home town. I accidentally won that race, too. I didn’t know how to go into marathon pacing. It just came to me and I qualified.”

The stress fracture meant he couldn’t run in the Boston Marathon.

“Pretty much I was tired and tired of getting injured,” Hardy said. “Academically, I wasn’t passing math, so I was exhausted from that as well.

“As a team, I was expected to do my part. I think I was the fourth or fifth man on the team, so I was held accountable to perform my best and just getting injured off and on was kind of wrecking, because as a team you have to count on everybody that’s there to perform their best to win as a team. Just me getting injured was bringing the team down, so I didn’t really take it well. ... But with those injuries I learned from it to take care of myself better and taking care of your body better and what to do to make your body stronger as well, such as lifting and core, balance and mobility work, which I started doing since I came here. I started doing a little more extra on the side actually, to prevent injuries. That’s probably one of the fears I have about running.”

Hardy said he met a coach from UAV in 2015 and he started training with him in the summer after his second year at Central Arizona.

“I was just taking up his training to see how I feel about it, whether I wanted to pursue running again or to pursue my education,” Hardy said. “Overall, it was a pretty good summer of training. I was getting back into it slowly and I just wanted to see how far I would go with my education and running again, so I gave it a shot and came out here. It wasn’t what I expected. We actually get four seasons here. It was pretty nice. The coach, he took care of me.

“Overall, racing-wise, he didn’t really push me to race as much as the last school I did. The training was pretty good. It got me back to my fitness level. I was feeling good about running and education-wise, I feel I’ve done a pretty good job at it. It was a pretty good season and a pretty good academic year as well. So far, it’s working out so good. It’s nice to have something to look back on, see how far you’ve come. It’s like a milestone.”

Hardy is set to graduate in the spring with a major in criminal justice, which his mother also majored in.

“Just seeing runners coming from small towns is pretty big, because there’s not really much support for it, so it’s kind of hard to get it out there,” Hardy said. “So that’s why it’s a big thing for me. It’s something I’ve tried to motion to other people that running is also a sport. For me to take it as a sport and to show how much it means to us runners, individually, is probably something big. Most people don’t like to run, so it’s kind of hard to get the idea to other people.”