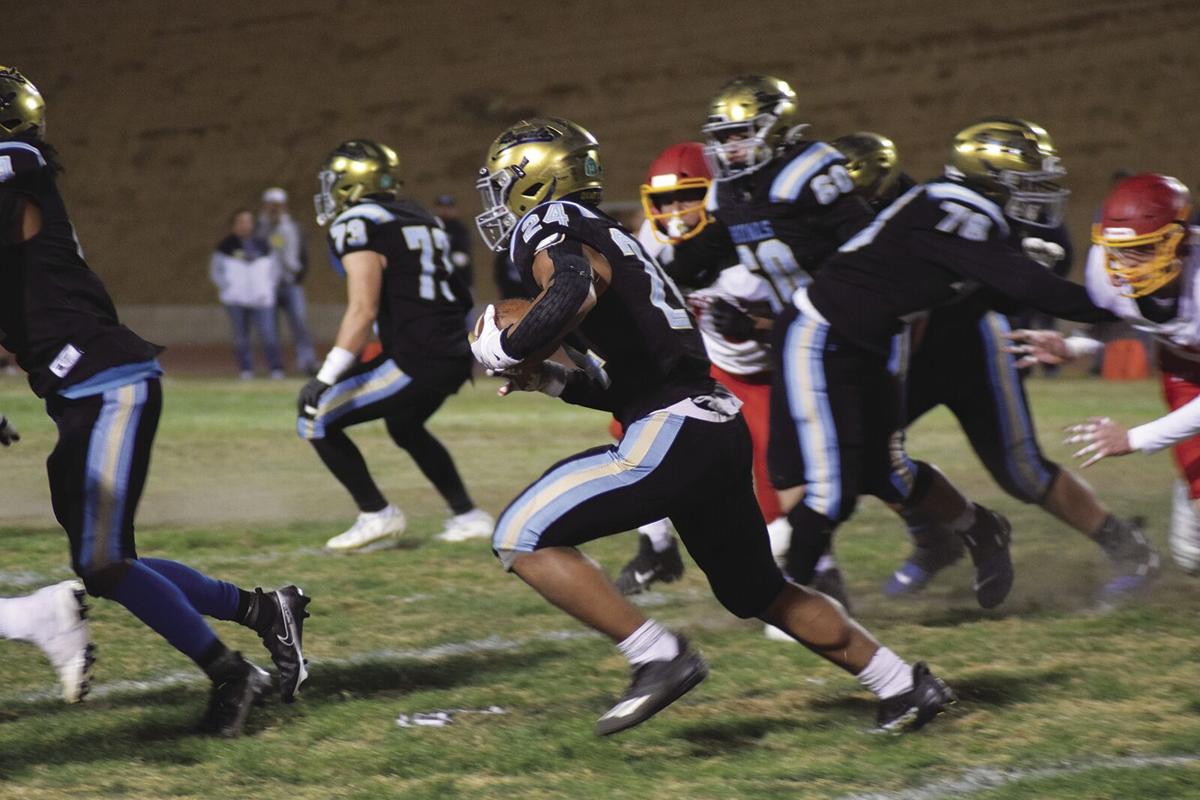 Quartz Hill’s Ashtin Dupleasis (24) runs with the ball with protection from his teammates during Friday’s CIF-Southern Section Division 12 semifinal game. The Royals won 23-0. 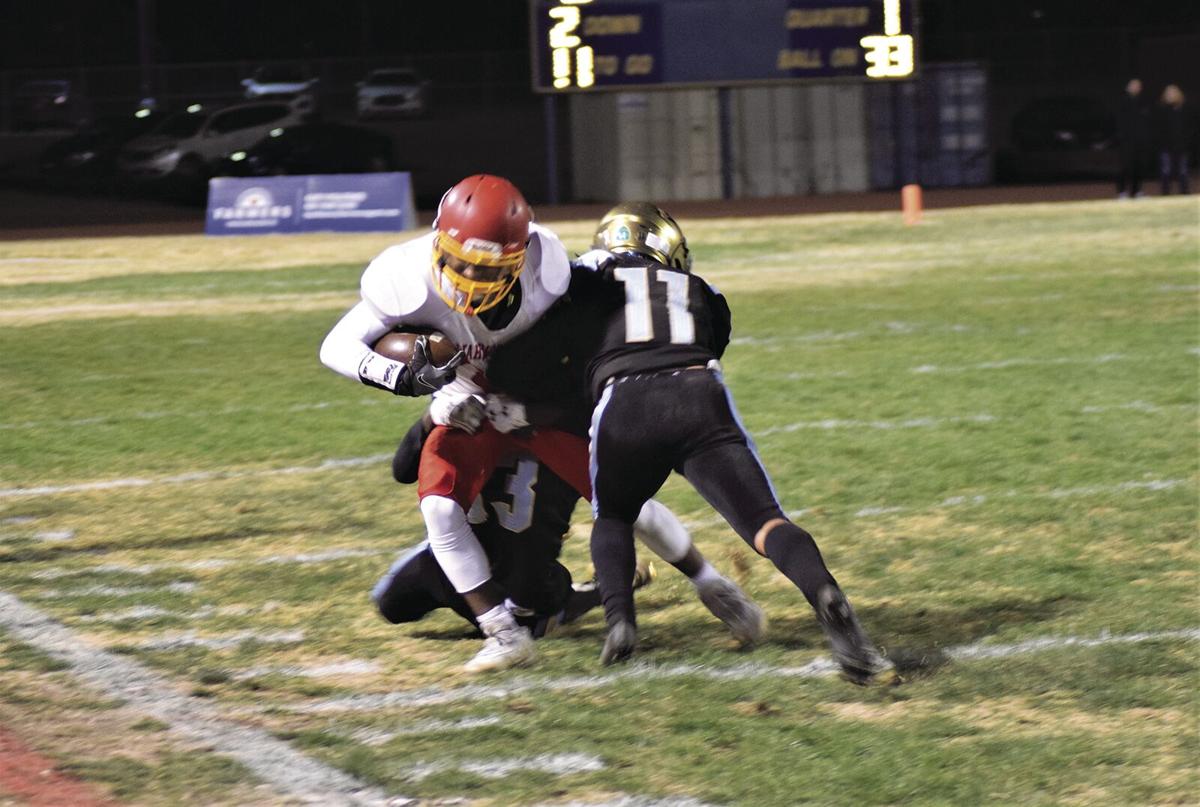 Quartz Hill’s Ashtin Dupleasis (24) runs with the ball with protection from his teammates during Friday’s CIF-Southern Section Division 12 semifinal game. The Royals won 23-0.

QUARTZ HILL — The Quartz Hill defense set the tone in the second half of their semifinal playoff game against Woodbridge on Friday night.

The Royals’ defense forced a turnover on the second play in the third quarter and added two more in the second half of a 23-0 victory over Woodbridge in a CIF-Southern Section Division 12 semifinal game at Quartz Hill High School.

The Royals (8-4) will play at Compton in the championship on either Friday or Saturday night next week.

Compton defeated Tahquitz 52-35 in the other semifinal game on Friday night.

“It feels great,” Quartz Hill junior Ashtin Dupleasis said. “I’m glad our team came together and we came out with a W. I know it was a slow start in the beginning.

“This is my third year here. I’m a junior and I’ve been dreaming about this my whole life. I’m just glad to be on this team. We need to keep on working.”

Quartz Hill led 3-0 at halftime and kicked off to Woodbridge (5-8) to start the second half.

The Warriors fumbled on the second play of the third quarter and Quartz Hill senior Fidel Hernandez, who forced the fumble, recovered it for the Royals.

“Very happy. Very happy,” Quartz Hill coach James Vondra said. “Our defense played four quarters of football today. Offense, we were sloppy in the first half. We fixed that and the second half was a lot better.”

The Royals were able to immediately capitalize on the Warriors’ first turnover of the game, as Dupleasis scored on an 8-yard run to give Quartz Hill a 10-0 lead.

The Quartz Hill defense held Woodbridge to 33 total yards in the second half.

The Royals sacked Woodbridge sophomore quarterback Edward Ma twice in the second half, the only sacks in the game.

Gabriel sacked Ma in the third quarter and senior Drake Stanton had a sack in the fourth quarter.

Stanton had a batted pass on the play after his sack, putting the Warriors at their own 5-yard line.

Woodbridge fumbled on the next play and Quartz Hill senior Tylen McKeever recovered the ball in the end zone for a touchdown and a 17-0 lead early in the fourth quarter.

The Royals capped the game with a nine-play, 82-yard drive that culminated in a 3-yard touchdown run by Quartz Hill senior quarterback Chalin Crawford with two minutes and 50 seconds remaining.

The Royals were in scoring position on the drive thanks to a 56-yard run on the final run by Dupleasis, who finished with 197 yards on 30 carries.

Bella had punts of 49 and 48 yards in the game and also had a touchdown saving tackle on a Woodbridge kickoff return in the fourth quarter.

The Royals took a 3-0 lead with a 25-yard field goal by senior Franco Bella with three minutes and 19 seconds remaining in the second quarter.

The Warriors missed a 40-yard field-goal attempt as time expired in the first half, with the kick sailing wide right and short.

Both teams had some degree of success moving the ball in the first half.

Quartz Hill finished with 153 total yards in offense, while Woodbridge had 132 yards.

Quartz Hill senior quarterback Chalin Crawford completed 6-of-15 passes for 50 yards, while rushing for another 42 yards.

Dupleasis had 15 carries for 61 yards in the first half.

The Royals had mixed results on the opening drive of the game, taking the ball to midfield, but turning it over on a fumble, the lone turnover by both teams in the first half.

Quartz Hill won the Division 10 championship in 2017, with a 26-21 win over Dos Pueblos at Quartz Hill High School.

The Royals lost to Bishop Diego in the first round of the State 3-AA playoffs.

Quartz Hill advanced to the semifinals with a 41-34 victory over Pasadena Poly and a 28-21 win at Lakeside in the first round.

The Royals finished third in the Golden League this season with a 4-3 record.

The Royals finished third in league in 2019 and lost in the first round of the Division 7 playoffs, 35-6 to West Ranch.

Woodbridge defeated Rosemead 48-14 in the quarterfinals after upsetting No. 2 seed Norwalk 24-21 in the first round.

The Warriors finished second in the Pacific Valley League.