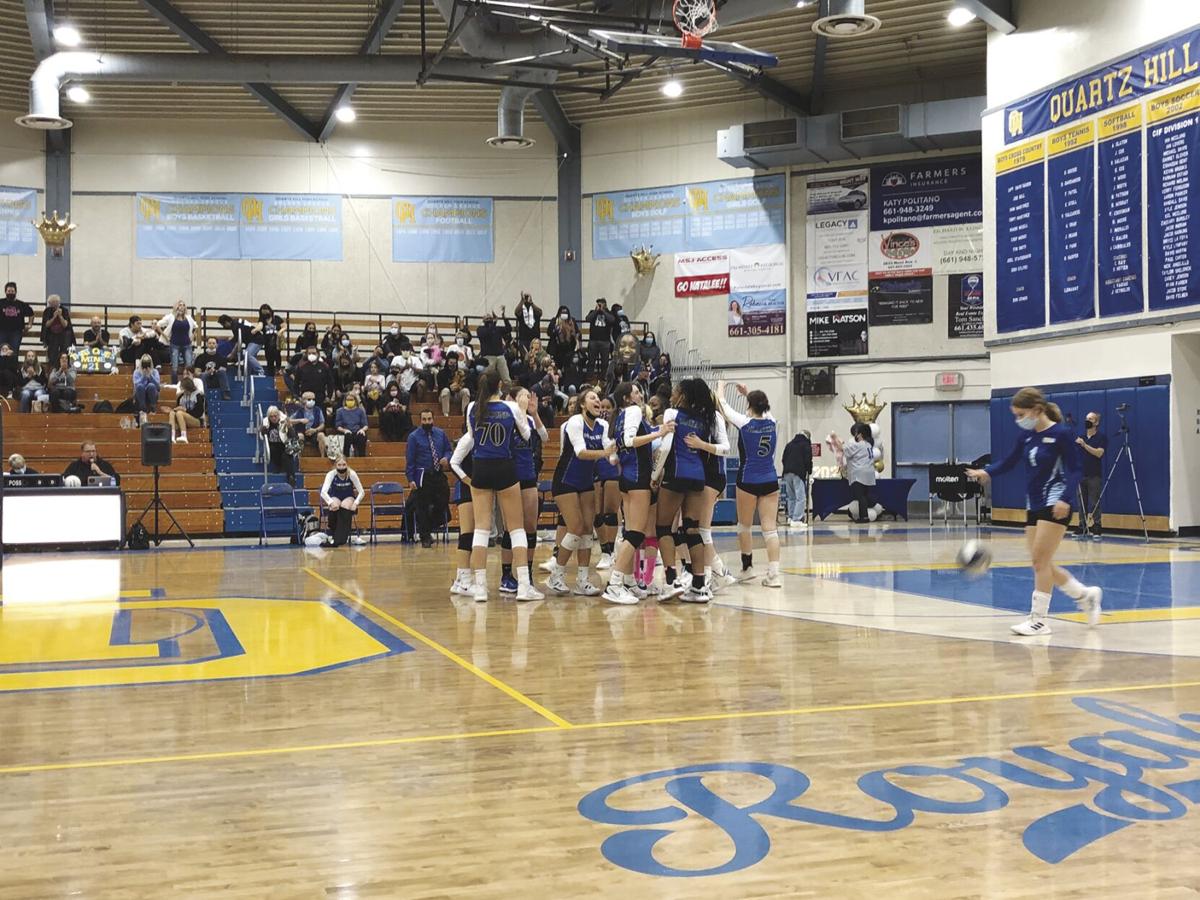 The Quartz Hill girls volleyball team celebrates its 25-21, 25-15, 25-16 victory over Knight on Tuesday at Quartz Hill High School. With the win, the Royals clinched the Golden League title. 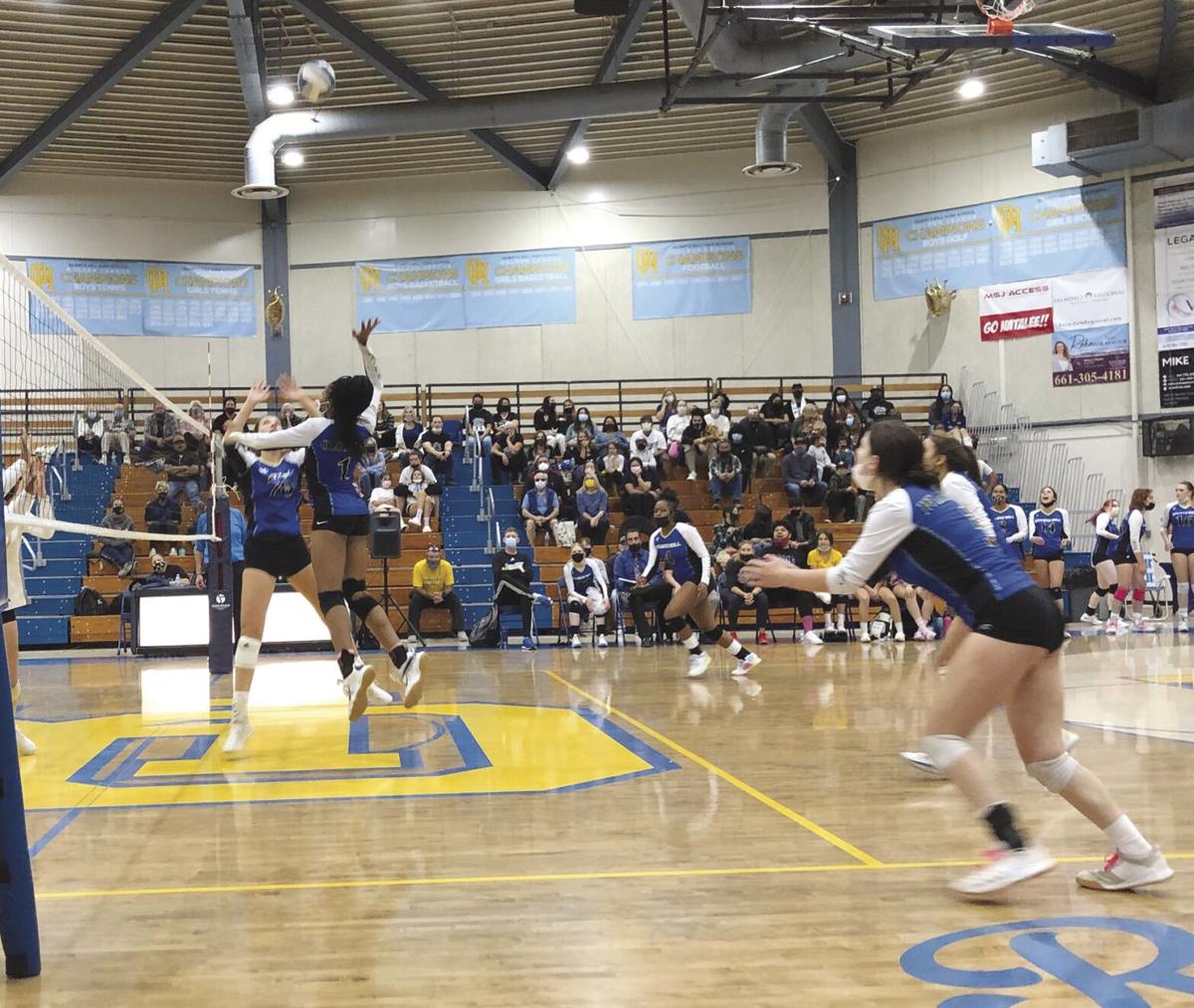 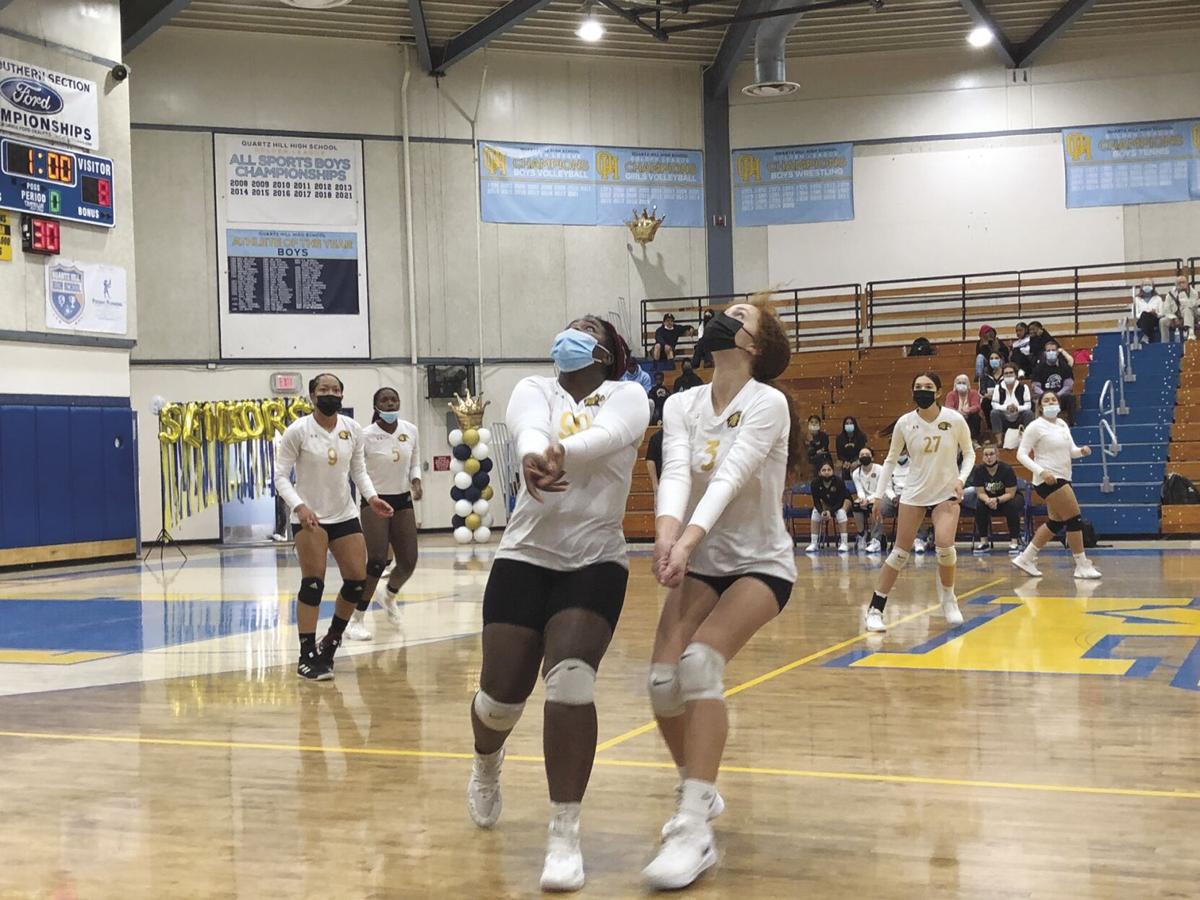 Knight juniors Oluwatosin Sunday (99) and Riley Asp (3) wait for a ball to come down while their teammates look on in Tuesday’s Golden League match against Quartz Hill. 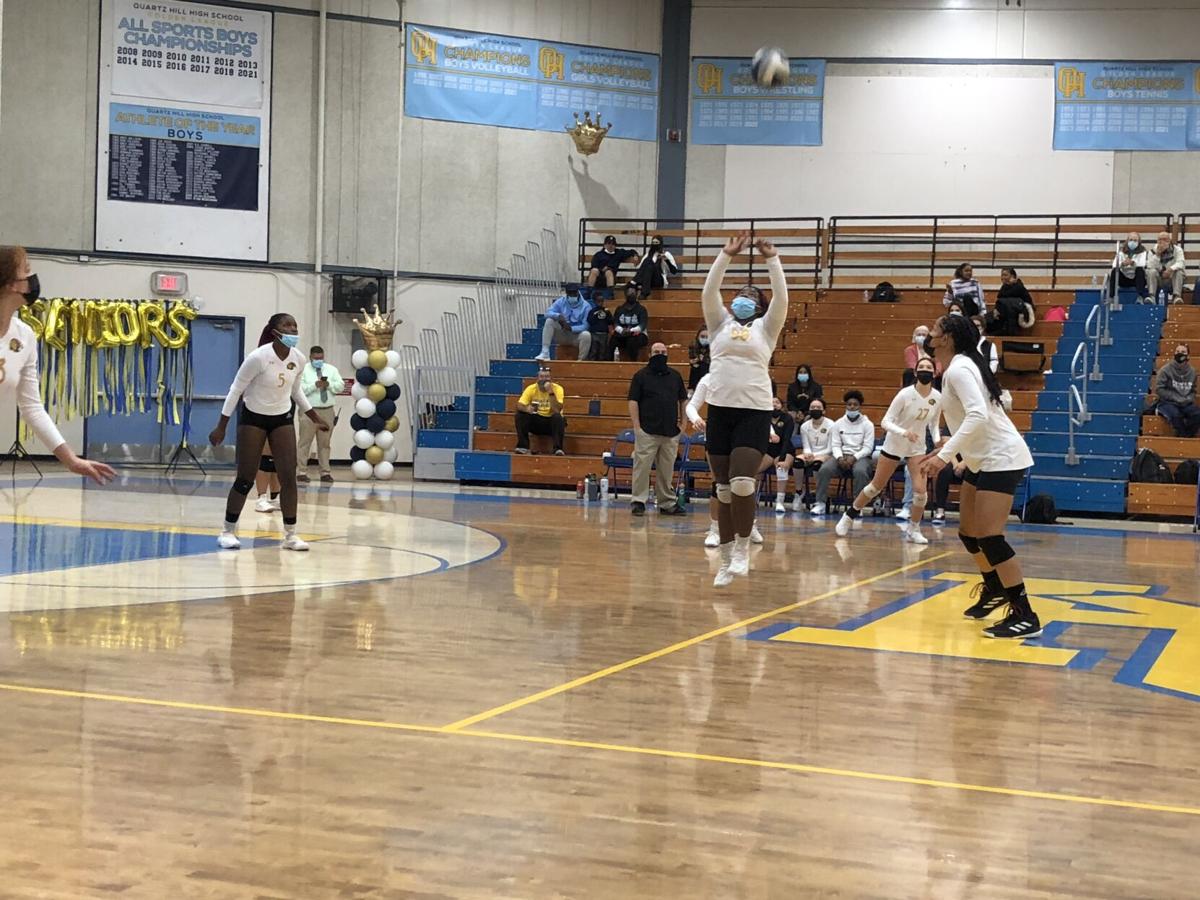 The Quartz Hill girls volleyball team celebrates its 25-21, 25-15, 25-16 victory over Knight on Tuesday at Quartz Hill High School. With the win, the Royals clinched the Golden League title.

Knight juniors Oluwatosin Sunday (99) and Riley Asp (3) wait for a ball to come down while their teammates look on in Tuesday’s Golden League match against Quartz Hill.

“I feel like we played pretty well,” Johnson said. “We did a little fun thing where the seniors got a chance to play at the beginning. I think they did a good job at whatever position the coach put them in. I think everyone took it really seriously and did our best.

“I’m really excited about (the league title). Every year that I’ve played, we’ve won. I’m excited and I hope when we get to CIF, we win in the playoffs. I’m optimistic.”

Johnson would be playing her third varsity season, if there had been a season last year, but it was canceled due to the COVID pandemic.

“That first set, we wanted to get our seniors some time on the floor,” Quartz Hill coach David Gutierrez said. “They’ve had a hard couple of years. Thankfully they get to play their senior season, but we wanted to make it special for them. We saw that. Their parents really going all out for them, just realizing that time is scarce and valuable. We started them on the floor in that first game.”

The Royals led for most of the opening set, never trailing after taking a 2-1 lead.

Gelfound had two kills and two aces in the opening set, Rachel Plantinga had two kills and Frazier and Pearce both had one kill apiece. Pearce suffered a left knee injury in the middle of the set and did not return.

“I never really had anything like this before,” Gelfound said of the ceremony for the seniors before the game. “Seeing how emotional some of the other girls got, it showed me that they really did care. Probably out of all my varsity years, this one was the best by far. The girls and I just have a lot of chemistry and we work really well together.”

The Royals did not return to their normal routine in the second set. Quartz Hill revamped its lineup and strategy after finishing 1-4 in a tournament in San Diego on Friday and Saturday.

“We changed our offense quite significantly after this past weekend,” Gutierrez said. “We went to a big tournament down in San Diego, where we had a number of losses at that tournament, but we learned from it. We go to that tournament because we know we’ll be seeing teams that are ranked higher than us. We ended up changing around quite significantly. Rather than running a 6-2 offense, which is what we’ve run in the past, we’re now running a 5-1 with Gabby, so she’s setting all the way around. We’ve changed the way we started our rotation. We’ve made a number of personnel changes, really based on what we learned over the course of the weekend.

“That second set and third set, you saw more of what we’re planning to do for the playoffs. Gabby had a good game for us. She’s really a strong attacker for us, but if we end up having her set for us, we move her from the attacking role. It’s important that the rest of our attackers can step up to score kills. We lose her as an attacker, but we gain the consistency that we need to deliver the balls to some of those other hitters. It was a good change. All the other girls have more responsibility, they have to score the kills.”

Knight jumped out to an early lead in the second set, but Quartz Hill never trailed after taking a 9-8 lead on a kill by Johnson.

Johnson had four kills in the second set for the Royals, Plantinga and Stuart both finished with three kills each and Gelfound had a kill and a block.

Knight was dealing with a lineup change of its own.

“Try to work out what things we can before playoffs next week. Get our girls comfortable, so our system gets back to normal.”

Knight led for the first part of the third set, getting two aces by junior Oluwatosin Sunday, one ace by senior Oluwatoyin Sunday and a block by junior Riley Asp and senior Emily Ruvalcaba.

The match was tied three times before Quartz Hill took a 16-15 lead it would not relinquish.

“Now we are going to go and head to the playoffs and we’re going to play much harder and more experienced teams, which is a little bit of adversity for our team because we really haven’t had those teams in our league,” said Gelfound, who verbally committed to George Mason University last month. “Now we need to step it up and practice harder and I’m really excited for that.

“I think we need to increase our volleyball IQ, get better at our defense and offense in that way, because we are going to be playing better teams. We do have faster offense, faster defense, better ball control. It was a little bit of a vast change, but the team was able to adapt and we did a really, really good job today and we only practiced once using the new lineup. I thought that was really amazing today.”

Gelfound had four aces and 33 assists in the match and Carillo had two aces. Carillo has moved from being a hitter to a defensive specialist.

Plantinga had a team-high nine kills, Stuart had seven and Johnson had six kills.

“Those are the two girls who really have to pick up the slack for Gabby and they did it tonight,” Gutierrez said of Plantinga and Stuart.

Quartz Hill plays at Littlerock on Thursday in the regular-season finale and Knight plays at Eastside.

Quartz Hill defeated Knight in straight sets in the first meeting on Sept. 16, the first league match after the Royals had their 64-match win streak in the Golden League snapped by Highland in five sets.