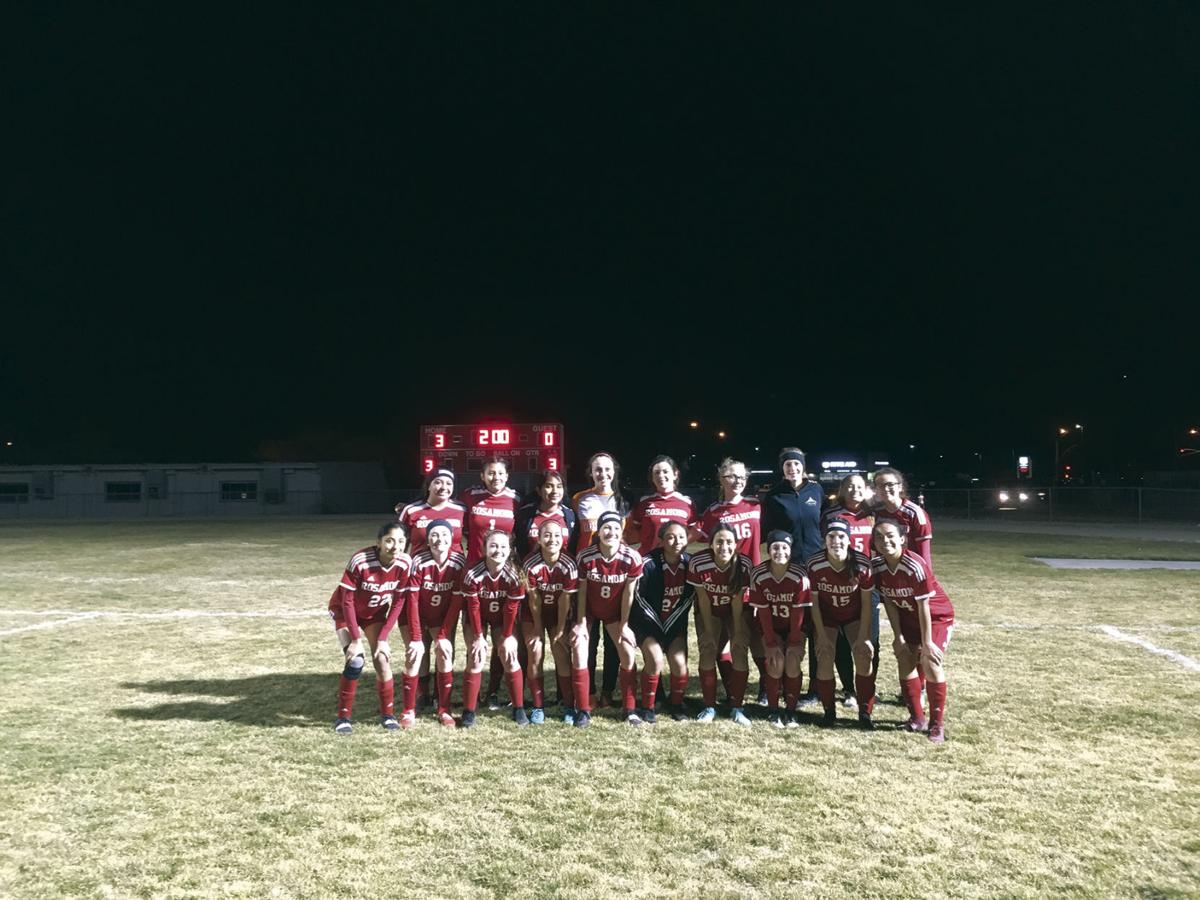 TEAM BONDING —The Rosamond girls soccer team poses in front of the scoreboard after a 3-0 victory over Kern Valley in a CIF-Central Section Division 5 first-round playoff game on Wednesday. 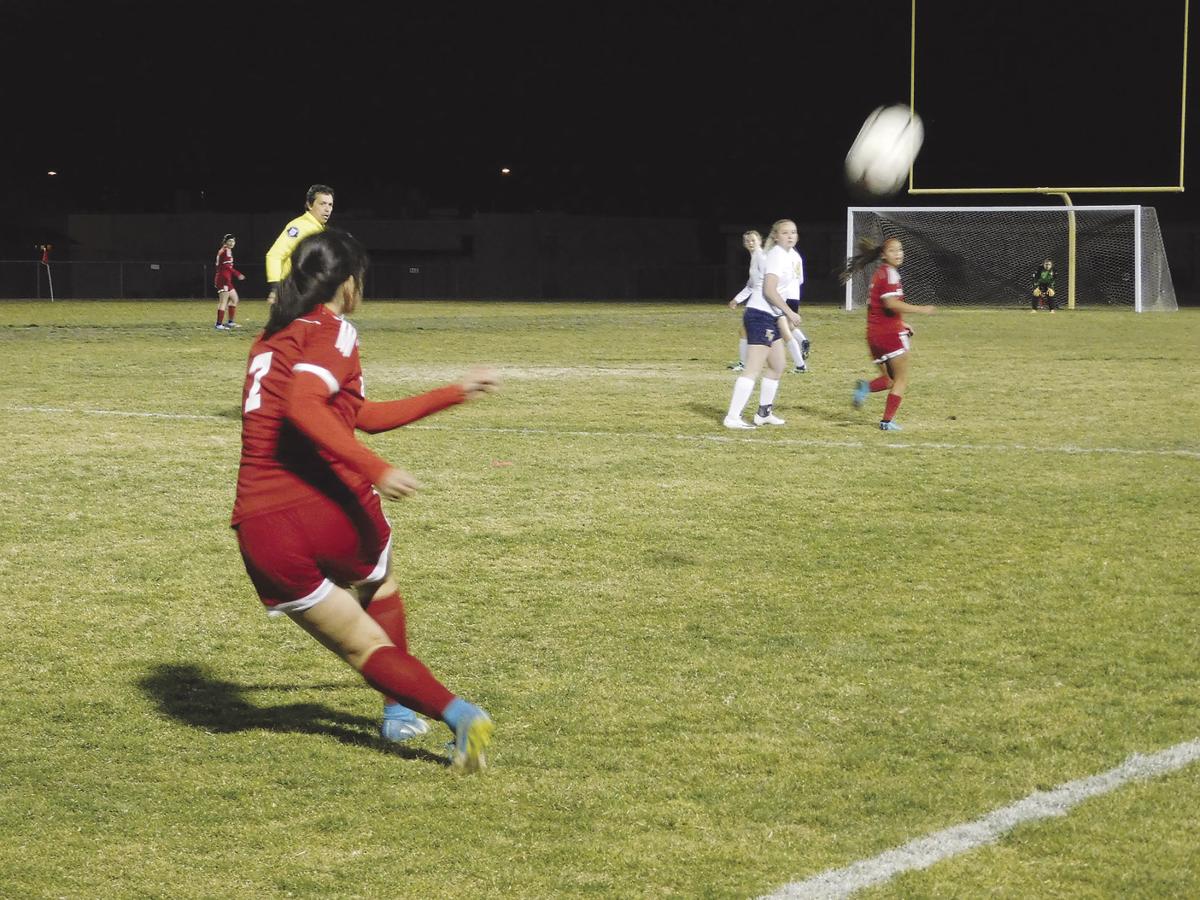 TEAM BONDING —The Rosamond girls soccer team poses in front of the scoreboard after a 3-0 victory over Kern Valley in a CIF-Central Section Division 5 first-round playoff game on Wednesday.

ROSAMOND — The No. 3-ranked Rosamond girls soccer team had to work hard for a 3-0 victory over league foe Kern Valley, ranked No. 14, in the first round of the CIF-Central Section Division 5 playoffs on Wednesday night.

The Roadrunners (17-4-1) scored all three of their goals in the final 16 minutes of the game, despite peppering the goal throughout the contest.

“One game at a time,” Rosamond coach Eddie Corletto said.

The game was scoreless at halftime, but could have easily been at least 1-0.

Just before the halftime whistle blew, Rosamond senior captain Tori Gomez kicked in a goal in front of the net. It was immediately waved off by the referee, who later told Corletto that Gomez “pushed off” of another player to get in position.

At halftime, Corletto drew out plays for his team on a whiteboard.

When the second half began, the Roadrunners continued to pepper the goal with solid scoring chances.

But Kern Valley senior goalkeeper Lexi Baker proved to be a force to be reckoned with.

The Roadrunners had 12 shots on goal and Baker probably had about the same number of saves.

“She kept them in the game,” Corletto said of Baker. “She’s always on the spot where she needs to be. It’s frustrating.”

Getting an open shot at the net was near impossible as Kern Valley (6-7-3) plays with essentially two lines of defense.

“They’re completely defense,” Rosamond senior captain Alyssa Finch said. “They like to sit in the box and right outside the box so it’s really hard for us to shoot.”

The Roadrunners stuck to their plan to push the ball against the stingy Broncs defense.

With 16 minutes left in the contest, Alyssa Bran finally put the Roadrunners on the board after a pass from Gomez.

The players, however, felt little relief as the score was still too close.

Rosamond didn’t strike again until there was 2:33 left in the game. Finch got in position for a clear shot on the goal and sent it into the back of the net after taking a pass from Michaela Gaddis.

A few minutes later, in stoppage time, Alayna Finch set a pass to her sister, freshman Alexy Finch, who was wide open on the left side of the goal.

Alexy tapped in the goal to put the Roadrunners at a comfortable 3-0.

While the offense continued pressing, the defense held strong in the back, not letting Kern Valley get a shot on goal until a free kick near the end of the game.

The ball went over Rosamond’s line of defense and straight into the arms of goalkeeper Alyssa Moncibais for her lone save of the night.

“We’ve been working on defense a lot lately,” Gomez said. “A lot of (the players) are new, we had to fill a lot of positions from last year. I think we work really well back there. We have good chemistry and we just feed to our offense.”

Corletto said the team has been working on transitioning from defense and offense and visa versa, and the players felt they did a good job in that area on Wednesday.

“I think today we just learned how to transition better from offense to defense, so when we lose the ball, we get back,” Rosamond senior captain Irais Ponce said. “We’re working better as a team and I think we really came together tonight.”

The team was all about the ball throughout the game, often stealing inbound throw-ins from Kern Valley and turning those balls into scoring opportunities.

The two teams knew each other well after playing two games against each other in High Desert League play.

“It was kind of weird, because we’ve never played (a league opponent) in the playoffs before,” Gomez said. “It was a little odd and a little nerve-racking, because they know how we play. It was like, ‘Oh man, we’ve got to win, because we always play them.’”

“It was the same deal, we scored at the end,” Alayna Finch said. “So, they hold their ground.”

The No. 3 Roadrunners have another home game in the quarterfinals on Friday at 6 p.m. They will play No. 6 Liberty, which defeated No. 11 Dos Palos 4-0 on Wednesday.

“I think that we just need to continue with the chemistry,” Ponce said. “I think the bond we’ve created over the season is amazing and I think it’s something really special that we’re going to carry over to the next games and trust each other. I think we’re going to do really good. And hopefully we come out with a win on Friday.”