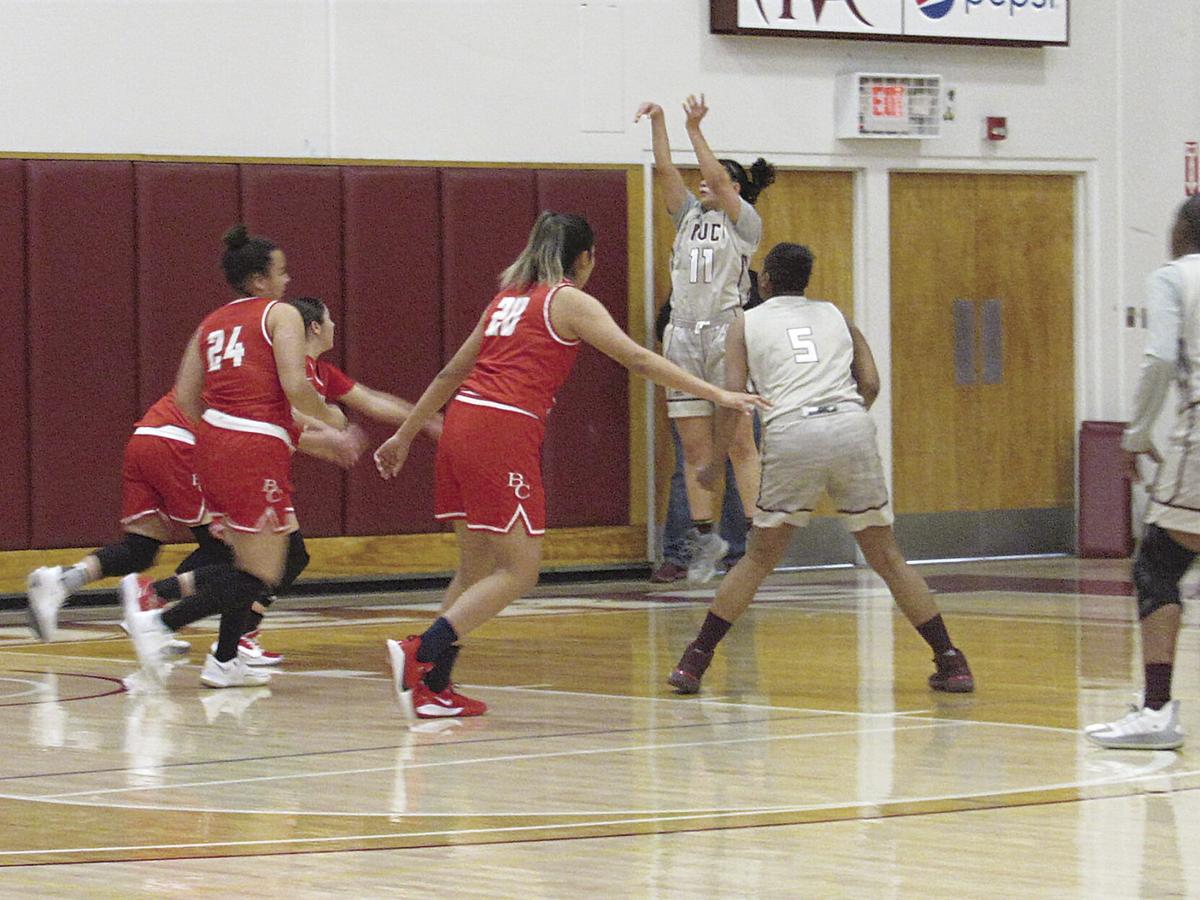 PUT IT UP — AVC’s Nicolette Pesquiera (11) takes a shot as teammate Niyah Page (5) and Bakersfield’s Makeira Cummings-Williams (24) and Perla Almaguer (20) look on on Friday. The Renegades won 66-64 in overtime. 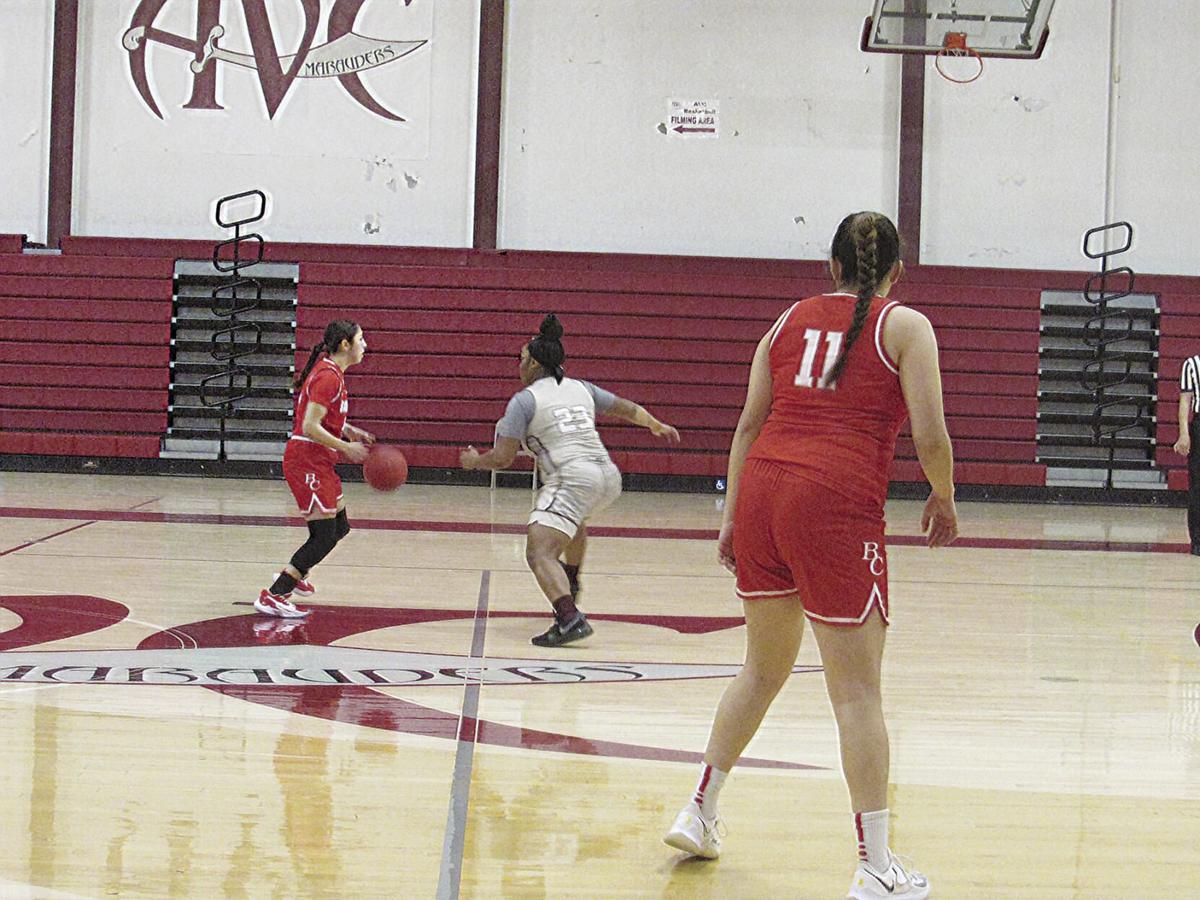 PUT IT UP — AVC’s Nicolette Pesquiera (11) takes a shot as teammate Niyah Page (5) and Bakersfield’s Makeira Cummings-Williams (24) and Perla Almaguer (20) look on on Friday. The Renegades won 66-64 in overtime.

The Marauders have been in many of their games this season, but Friday afternoon showed exactly what Green was talking about.

AVC fought all the way back from a second-half deficit and looked in control, but late shooting from Bakersfield and the loss of two key players in regulation and overtime doomed the Marauders as the Renegades rallied late to send the game into overtime and eventually were able to steal a 66-64 victory away from AVC at Marauder Gymnasium.

“We just have to know certain situations and we can’t give up threes when they need them. At times we’re not the most IQ savvy,” Green said. “Today we were in the game and we had a chance to win it. It’s very frustrating. We want to be competitive and we have to finish games when we have the opportunity to.”

The Renegades (4-3), which have won four consecutive games, built a 34-27 lead in the third quarter after the score was tied 23-23 at halftime. Bakersfield led 40-33 entering the fourth quarter before the Marauders began to mount their rally.

Niyah Page opened the quarter with two 3-pointers for AVC (2-4), which has lost four consecutive games, to cut the lead to 40-39. Page kept the Marauders close following another bucket with 3:24 remaining as Bakersfield held a 46-45 lead.

Bailey Cassell, who struggled shooting throughout the game after missing her first seven three-point attempts, hit her first 3-pointer of the game with 2:40 left to tie the score 48-48. That was followed by a layup by Jadis Watson who was fouled. Watson missed the ensuing free throw, but the Marauders grabbed their first lead since the second quarter, 50-48.

“I think we came out with the right energy, but just some possessions didn’t go our way. We need to work on our matchup defense and how to play better under pressure,” said Cassell, who finished with 16 points. “If I were scoring this one out of ten it would be a ten (for disappointment) because we gave it our all. We know we can beat them and they have another thing coming (on Saturday).”

Following another 3-pointer by Cassell, AVC took a 53-48 lead. Bakersfield responded with a 3-pointer by Brianna Green trimming the lead to 53-51. Green finished with 21 points, all coming off seven 3-pointers.

After Page hit 1-of-2 free throws with 13.6 seconds remaining, the Renegades had one final opportunity.

Kany’ah Patterson got the pass from a teammate in which Page went for the steal and barely missed. Patterson promptly knocked down her only 3-pointer of the game to send the game into overtime.

“I’m really mad at myself because I shouldn’t have gone for that steal. They made some really lucky threes. We’ve been so close and we fought so hard,” said Page. “We have to come out (Saturday) and get it back. It’s a very disappointing loss.”

Watson had already fouled out and ended with 11 points and 11 rebounds, and then in overtime Page fouled out with just over a minute remaining. Kholanee Harris hit one of her two free throws to put AVC up 63-60 with 59.6 seconds remaining.

However, once again the Marauders gave up another 3-pointer, this one to Green again to tie the score 63-63. Following an AVC missed shot, Bakersfield got the rebound and Elise Enriquez was fouled. She hit one of two free throws to put her team up 64-63 with 16.5 seconds.

AVC, needing only a two to win, got an ill-advised 3-point shot from Eriona Williams with several seconds remaining as the Renegades collected the ball. Following two free throws by Bakersfield, Williams was fouled. Needing to make the first free throw, she missed. She made the second and Bakersfield inbounded the ball and ran out the clock.

“We fought back,” Barry Green said. “We had our chances, so that was a positive.”