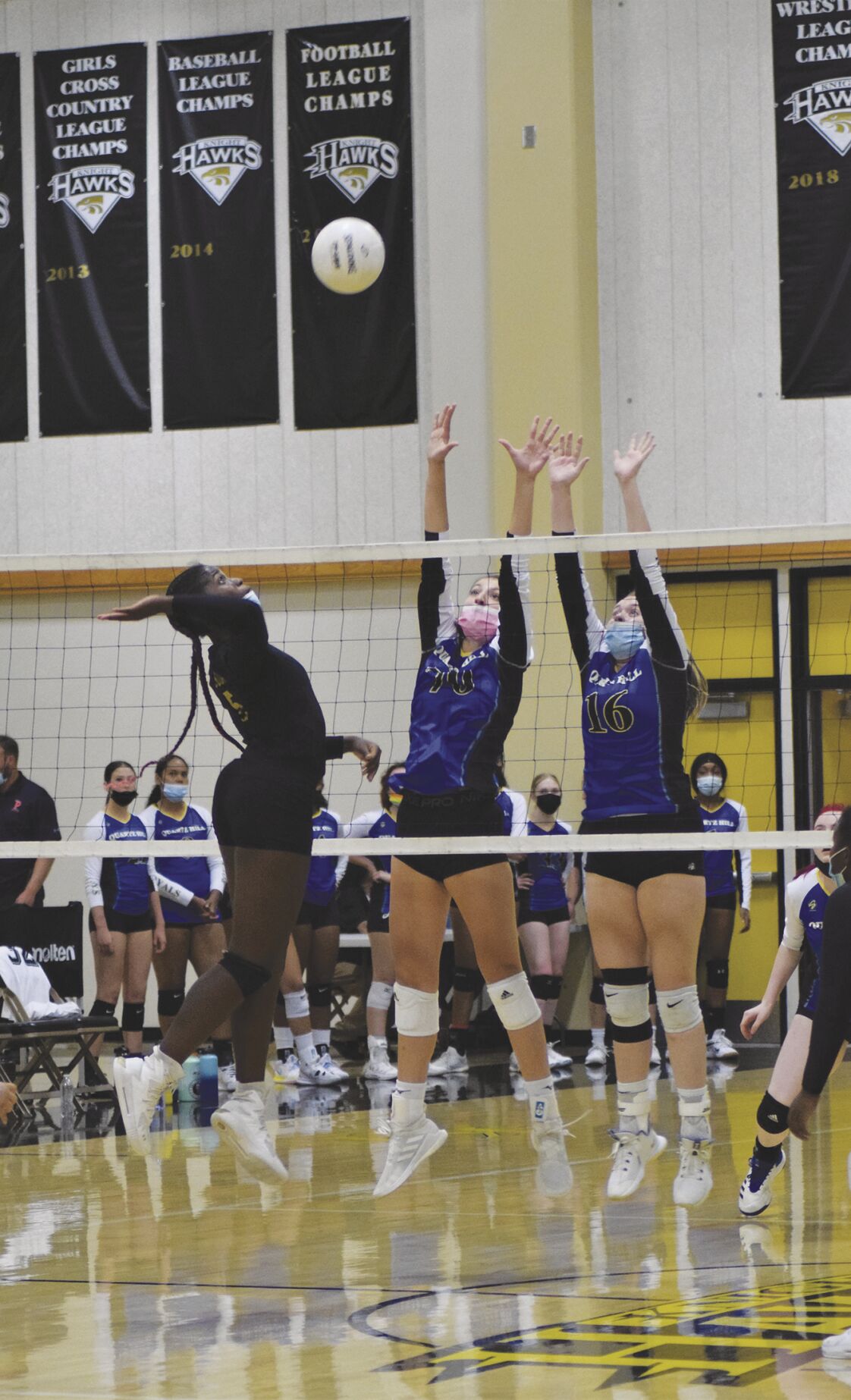 Quartz Hill’s Gabby Gelfound (70) and Ella Gawellek (16) jump up to attempt a block against a swing from Knight’s Oluwatoyin Sunday (left) during Thursday’s Golden League match at Knight. The Royals swept in three sets. 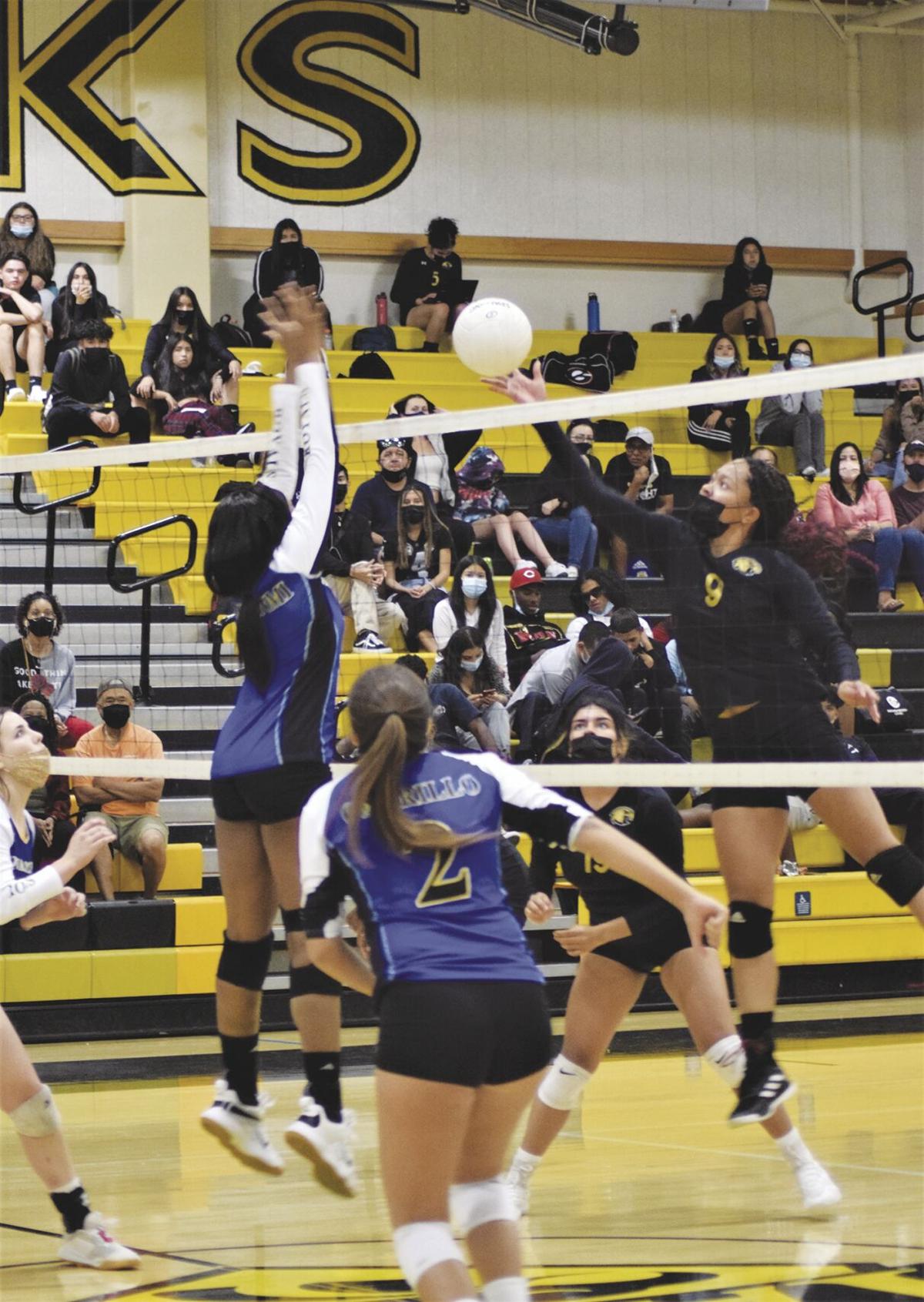 Quartz Hill’s Gabby Gelfound (70) and Ella Gawellek (16) jump up to attempt a block against a swing from Knight’s Oluwatoyin Sunday (left) during Thursday’s Golden League match at Knight. The Royals swept in three sets.

PALMDALE — The Quartz Hill girls volleyball team was focused for its match on Thursday at Knight High after suffering a rare loss in a Golden League match on Tuesday.

The Royals were in the unusual position of second place in league, facing undefeated Knight.

The Royals (14-6, 5-1) lost at Highland in five sets on Tuesday, snapping a streak of 64 consecutive league victories for Quartz Hill.

“That was a pretty big frustration for us, as you can expect,” Quartz Hill coach David Gutierrez said. “Only because I think the girls were capable of more.

“I think that energized the girls to be a lot more focused tonight, knowing that Knight hadn’t lost a match. I think the girls were motivated to do everything in their power to not experience another loss. We were a different team tonight than we were on Tuesday. Knight is a formidable opponent. We did not take them lightly. We knew that they were capable of scoring kills. We just played a lot better tonight, a lot better than we did earlier in the week, I should say.”

Quartz Hill last lost a league match in 2015, when the then Rebels lost two matches to Highland.

“I feel that it was such an improvement from the last game,” Quartz Hill junior Taylor Boone said. “We communicated a lot. We played very good on defense. Just the energy was so much up. It was so good.

“We came back in practice and we were like ‘You know what, we’re changing this. We’re not going to stop. We’re going to win. There’s nothing going to stop us.’ I think we didn’t have focus that game and we were all over the place and our communication started going down once our mental state was out of place.”

The Royals were obviously focused from the start Thursday night, leading for almost the entire match.

Although Quartz Hill took an early lead in the opening set, Knight briefly tied it at 2-2. After taking a 3-2 lead, the Royals never trailed again in the first set.

Quartz Hill got key kills from senior Gabby Gelfound and junior Rachel Plantinga and a block by senior Funmi Olukanmi.

Boone got an ace on set point.

“Honestly, I think they weren’t mentally prepared for this,” Knight coach Brandon Bell said. “Due to Highland beating Quartz Hill, I think mentally threw them off a little bit. They were a little surprised on that and they took this game in a different mentality than they should have.

“Definitely (the Royals) were on today. They were hitting great. Compared to my girls (who) were mentally out of it and it caused some bad hits and bad coverage here and there. Whereas Quartz Hill, they were everywhere. They were covering everything we could put up there. Basically, we’re going to go back to the basics. We’re going to work everything again and make sure we’re prepared for the next time we face them, because we want to take that next game for sure.”

The two teams exchanged the lead to start the third set before Quartz Hill took a 9-8 lead it would not surrender.

“We’ve got a lot of young girls on the team,” Gutierrez said. “A lot of our starters are juniors this year. One of our shortcomings at times over the course of the season has been, I think, focusing on the right things, that and energy. We are still learning how to bring the right mental focus and energy to every match. At times that flags and at times we do really well. Tonight I thought we did a great job both fulfilling their roles and bringing tons of energy to defense, because we knew we were going to have to do it against these girls. We’re still trying to build those habits and I’m thankful we were able to recover tonight.”

“Those girls all played varsity two years ago,” Gutierrez said. “Everybody else is new and most of them are young. Most of our starters are young. They missed out on their entire JV season and now they’re coming to varsity. What we’re seeing in the league is a lot more parity because of that, because we had a year less of development. It really kind of makes it anybody’s match. Everybody is kind of relearning and reacclimating.

“It’s actually nice to have a couple of teams in the league who will push us, because I think that’s where we learn the most, is when we get pushed. We were pushed by Highland and honestly while the score reflects that we beat Knight fairly easily, I don’t think that’s what happened tonight. I think Knight is a formidable, scary team. I think we just played very well tonight. I don’t think it was an easy match. I think they met us after a loss.”

Boone, a first-year varsity player, said it was hard dealing with a canceled season.

Knight senior Sophia Parker is the lone player with varsity experience for the Hawks.

Knight senior Oluwatoyin Sunday had a kill and a block in the second set and junior Riley Asp had two kills in the third.

Knight will host Eastside on Tuesday and play at Highland on Thursday. Knight defeated Highland in five sets in the first half of league play.

“There’s going to be another big game right there,” Bell said.