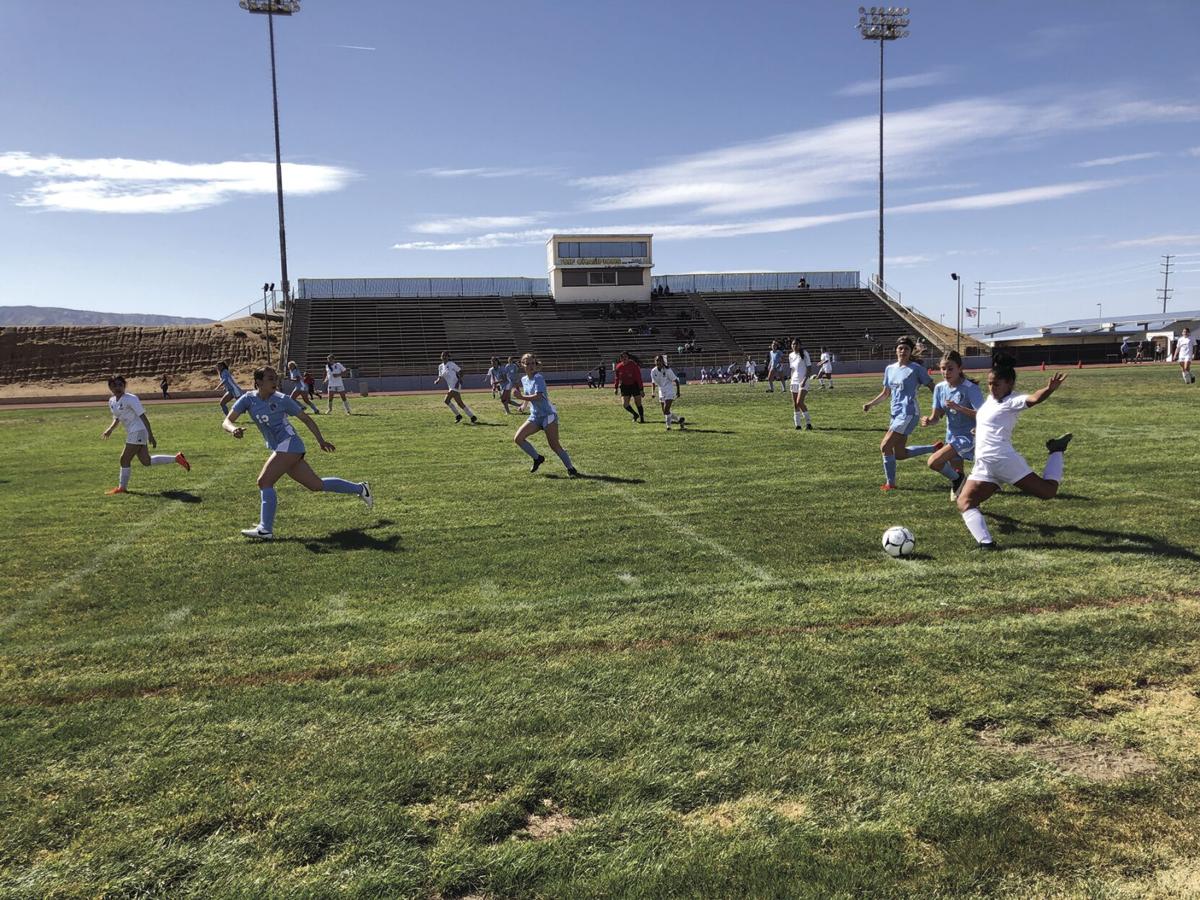 KICKIN’ IT — Eastside’s Samantha Valencia looks to kick the ball toward the Quartz Hill goal, while some Rebels players try to defend in Thursday’s game at Quartz Hill. The Rebels won 5-1 to remain unbeaten in two games. 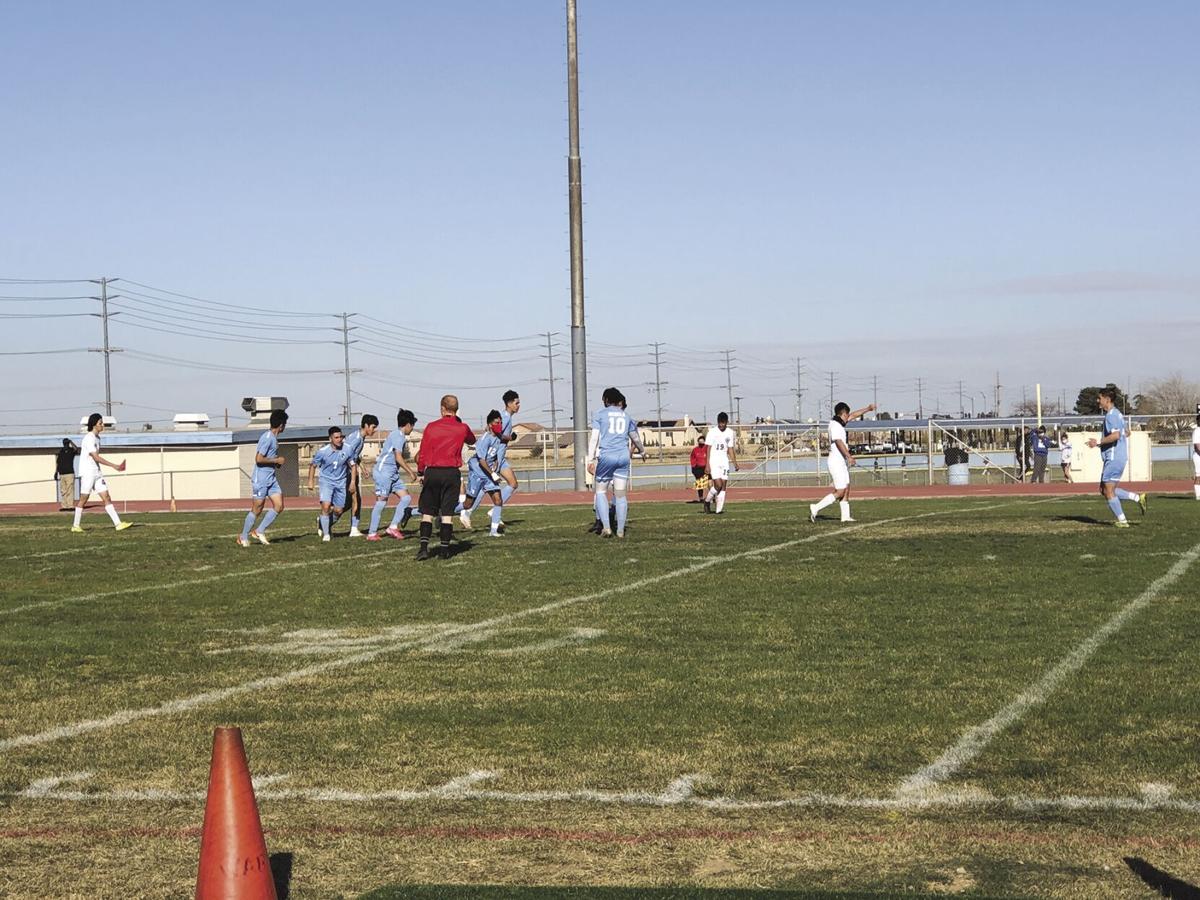 KICKIN’ IT — Eastside’s Samantha Valencia looks to kick the ball toward the Quartz Hill goal, while some Rebels players try to defend in Thursday’s game at Quartz Hill. The Rebels won 5-1 to remain unbeaten in two games.

QUARTZ HILL — The Quartz Hill girls soccer team has had a hot start to the season this week.

The Rebels easily won their season opener on Tuesday and dominated Eastside on Thursday with a 5-1 Golden League victory at Quartz Hill High School.

Quartz Hill (2-0) solidified the win with three unanswered goals in the second half after taking a 2-1 lead at halftime.

“I think in the first half we started slow, but we picked up and played really well,” Quartz Hill sophomore Haylee Patino said. “It was 100 percent communication. Once we started communicating, we started playing with the ball much better. We’re able to make runs and look for the weak spots.”

Patino scored both first-half goals for the Rebels, after Eastside struck first in the eighth minute.

Eastside junior Jasmine Quiros chipped in a shot from 5 yards out, after junior Delia Bocanegra worked the ball past the Quartz Hill goalie on a breakaway, giving the Lions a quick 1-0 lead.

Patino and the Rebels answered in the 16th minute, when she chipped the ball over the Eastside goalie, who deflected the ball with a leaping attempt, but it still went in to tie the match at 1-1.

Patino scored the go-ahead goal in the 34th minute on a breakaway. The Eastside goalie came out to challenge the ball, but Patino was able to get past her and easily chip in the shot for a 2-1 halftime lead.

“It was a great game,” Quartz Hill coach Arika Ontiveros said. “Eastside gave us a great game. They played hard and they challenged us in the first half, obviously they set the rhythm and we had to fight back. We proved our way through the game and showed aggressiveness and continue to show to ourselves that we are the team to beat.”

Quartz Hill is the defending Golden League champion and beat Lancaster 7-0 in their opener on Tuesday.

Eastside, which finished third last season, was playing its season opener because Antelope Valley did not have enough players for its match on Tuesday.

“I’m not mad,” Eastside girls coach Ashley Singh said. “The girls did great. This is our first game. It’s only going to get better from here.”

Singh said the Lions had a few players injured and a few others that weren’t cleared yet.

Quartz Hill freshman Katelyn Kott scored in the second minute of the second half off a corner kick.

Quartz Hill freshman Addison Leite scored in the 53rd minute to give the Rebels a 4-1 lead and freshman Riley Lang capped the scoring for Quartz Hill in the 80th minute with a shot from 5 yards out past a diving Eastside goalie.

“It’s so nice,” Patino said of the start of the season. “I was going to be so upset if we weren’t going to have a high school season."

The Golden League has 14 matches scheduled, before playoffs begin in early May.

Quartz Hill’s Matthew Gamero scored on a header over the Eastside keeper in the 10th minute to give the Rebels the early lead.

Quartz Hill’s Ari Chung also scored on a header, from 5 yards out in the 19th minute to give Quartz Hill a 2-0 lead at halftime.

“I feel that the team did really well,” Williams said. “We were really connecting. We were on our stuff today. I feel that we were really putting all the stuff together we did in practice.”

Quartz Hill’s Evan Kurian capped the scoring for the Rebels with a goal in the 50th minute.

“I feel like the boys came out well and came out strong today,” Quartz Hill coach Charles Gordon said. “The beginning was kind of sluggish, but we came out and did our job. Very good performance from them.”

Eastside, which lost 3-1 to Antelope Valley on Monday, argued for a foul in the penalty box in the 68th minute, but were not given a penalty kick.

“At first I was thinking we might not get a season, but when it was announced I was really happy to know that I was finally going to get a season,” Williams said. “It was just happy to finally get my senior season and have some fun.

“Knowing that we just get this, we’re getting thrown into this thing, we know that we want to win this. We want to do our best. We want to push for what we want to do. All the boys are working hard. We’re all doing our stuff and that motivation to push hard and show that we can still play, even after all the stuff going on.”

Eastside senior Daniel Zamara scored from 10 yards out in the 78th minute.

“I think we’ve had a very good, strong start to the season,” Gordon said. “We are looking forward to getting better each and every game.”