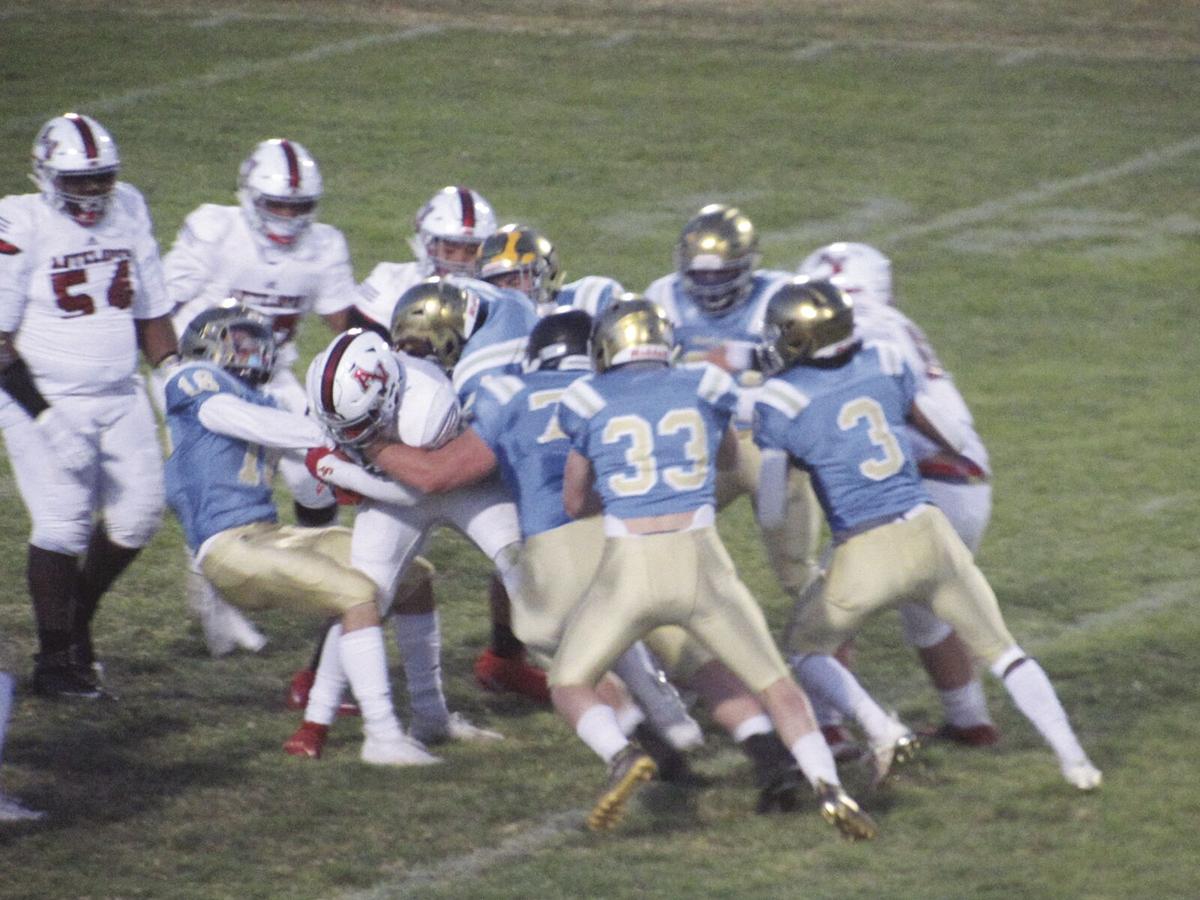 HUDDLE — An Antelope Valley player is swarmed by Quartz Hill defenders during a Golden League game at Quartz Hill High School on Friday. 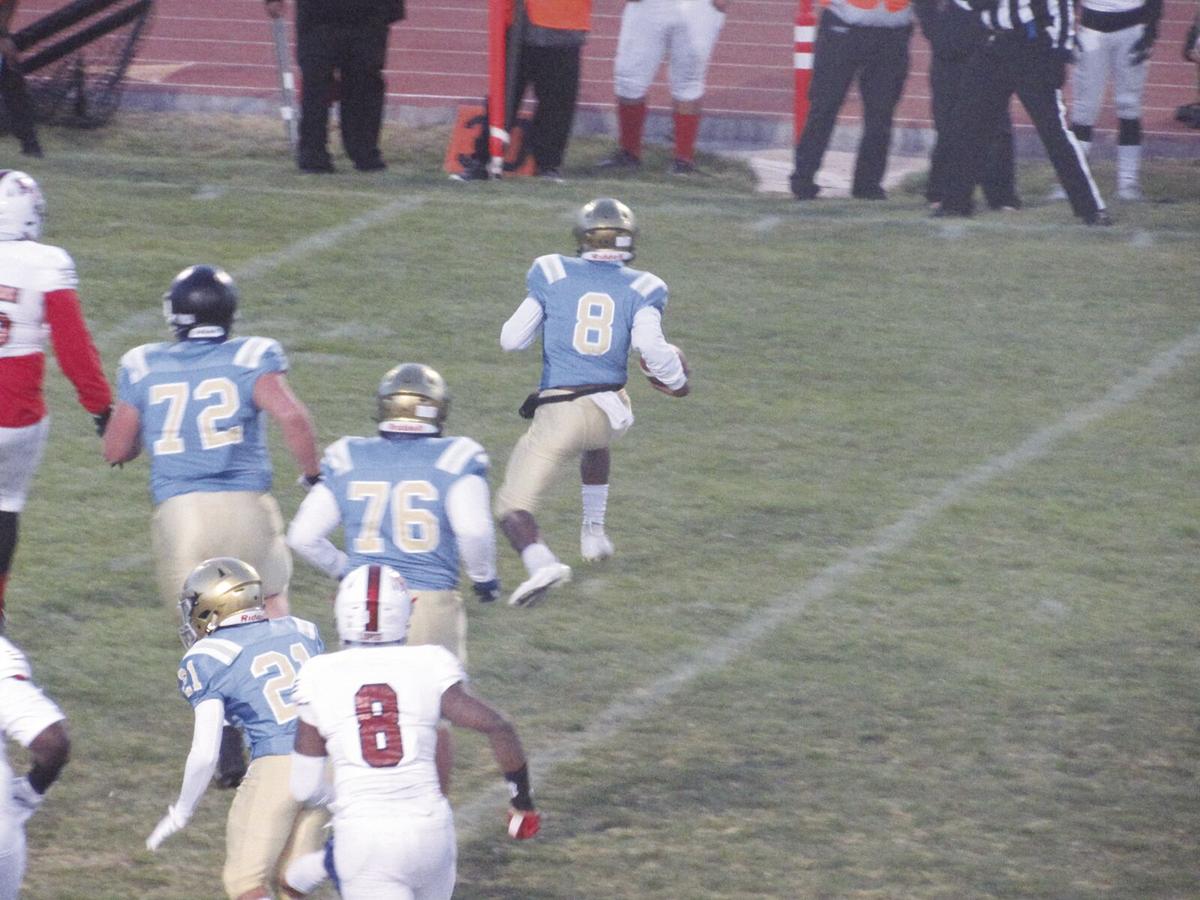 HUSTLE — Quartz Hill junior quarterback Chalin Crawford (8) scrambles while looking downfield for an open receiver in a Golden League game against Antelope Valley on Friday. It was the season opener for both teams.

HUDDLE — An Antelope Valley player is swarmed by Quartz Hill defenders during a Golden League game at Quartz Hill High School on Friday.

HUSTLE — Quartz Hill junior quarterback Chalin Crawford (8) scrambles while looking downfield for an open receiver in a Golden League game against Antelope Valley on Friday. It was the season opener for both teams.

QUARTZ HILL — At times it was sloppy on both ends. And that was to be expected.

It’s been more than 16 months since AV High and Quartz Hill put on their pads and laced up their shoes.

The longtime rivalry between the two teams opened up an abbreviated Golden League season and this time it was the Quartz Hill Football Team that led from start to finish and walked away with a 24-13 victory over the ‘Lopes, Friday night at Quartz Hill High School.

It’s the first time ever that it wasn’t the ‘Lopes and the Rebels as Quartz Hill dropped the name in 2020. A new nickname for Quartz Hill (1-0, 1-0) is expected to be revealed on Monday.

As for the game itself, Quartz Hill jumped out of the blocks fast on its opening possession of the game. It used a methodical 11-play drive (three passes, eight rushes) and drove 69 yards to score the game’s first touchdown.

“I was very anxious in the beginning, but I felt good out there,” Crawford said. “It was a great team win. I thought the team looked great out there. We still have some things to work on.”

It was an impressive debut for Crawford as he completed 16-of-23 passes for 180 yards and two scores. The dual-threat quarterback did it with his legs too as he rushed for 58 yards on 11 carries and one touchdown.

Following a turnover by AV High (0-1, 0-1), Quartz Hill made the ‘Lopes pay. Three plays after the takeaway, Crawford connected with Maxwell Casey over the middle for an easy 18-yard touchdown. That put Quartz Hill up 14-0.

“I think in the first half everything was clicking for us on offense and defense. But we were sloppy in the second half,” Quartz Hill head coach James Vondra said. “I was happy with our offensive drive, we just need to finish. We need to get hungrier down there. Now we have to focus on Palmdale.”

Quartz Hill had two drives halted inside AV High’s 5-yard line and came away with no points.

The ‘Lopes got on the board in the second quarter following a tough run by quarterback Kymari Mays who scampered in from seven yards out cutting the lead in half, 14-7.

“It was a tale of two halves for us. Our defense gave us an opportunity to win the game. There wasn’t a lot of time to prepare and you don’t know what you’re preparing for,” AV High head coach Jermaine Lewis said. “We just have to go back to the drawing board and figure some things out. We have some playmakers on this team, we just don’t have a lot of depth.”

Late in the first half Quartz Hill grabbed a 21-7 lead after Crawford threw a perfect dime over the outstretched hands of a ‘Lopes defender and into the hands of Jordan Bankston for a 36-yard hookup.

AV High made a game of it late after Mays connected with Cory Dozier for a 55-yard score and Quartz Hill only led 21-13 following the missed extra point.

“We just kept on fighting tonight. I thought we could have brought it more offensively,” said Dozier. “We have to learn from this loss and bring it next week. We’ll get better each week.”

Quartz Hill once again got into the ‘Lopes red zone, but with 1:07 remaining Vondra opted to kick the field goal and it worked as Franco Bella drilled a 25-yard field goal to put the game out of reach.