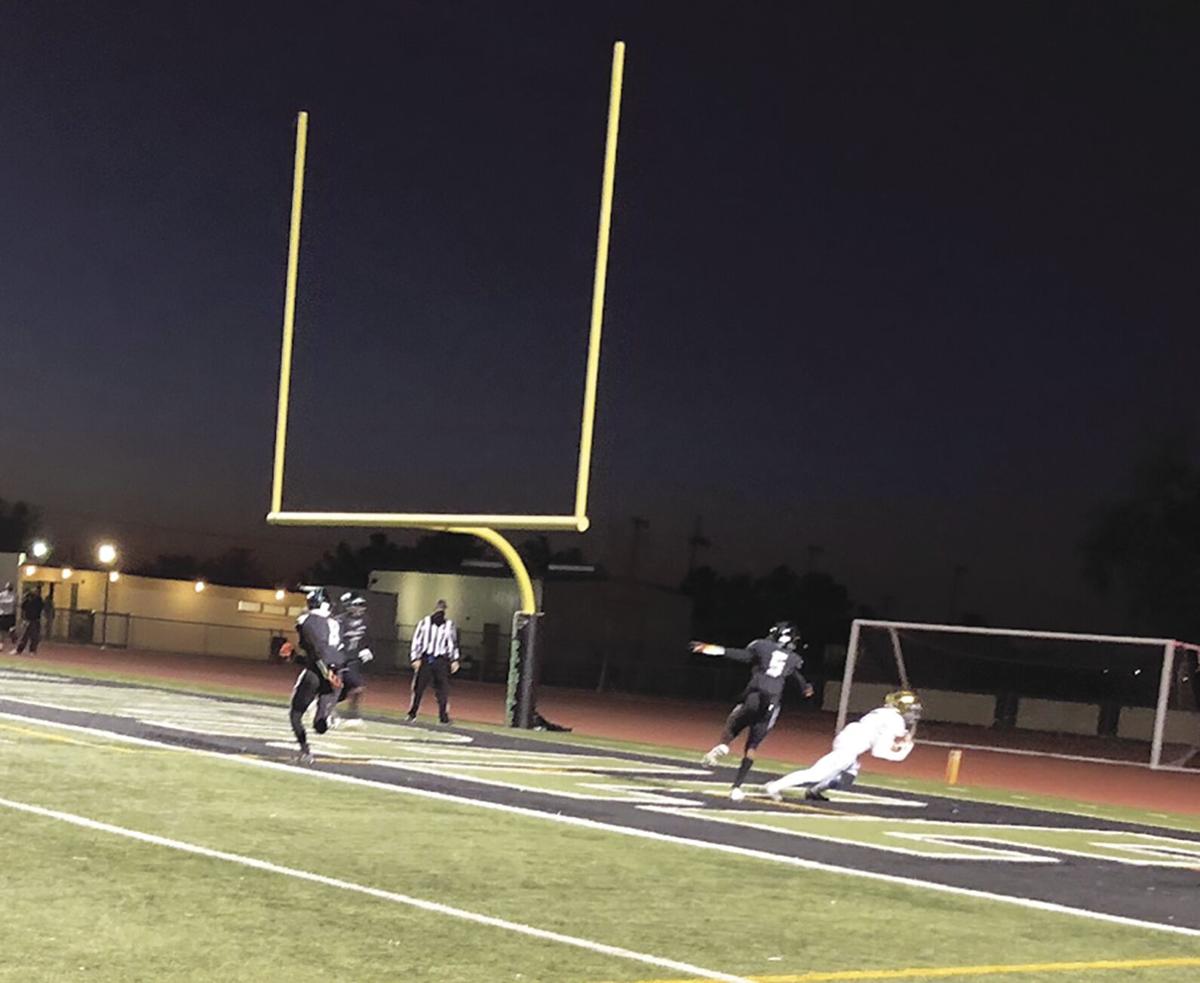 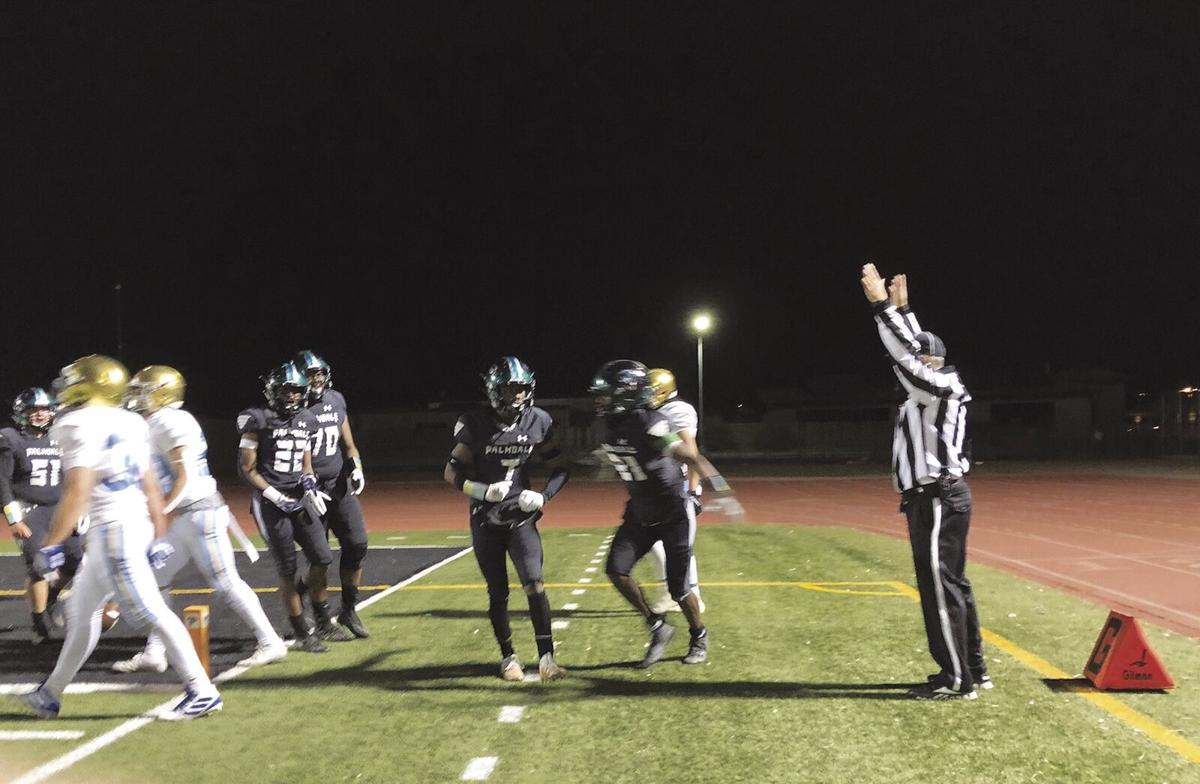 FIRST LEAD — Palmdale sophomore Damrio Jackson (7) is congratulated by teammates after scoring on a 2-point conversion to give Palmdale its first lead of the game in the fourth quarter against Quartz Hill Friday night at Palmdale High. The Royals answered and won the game 13-8.

FIRST LEAD — Palmdale sophomore Damrio Jackson (7) is congratulated by teammates after scoring on a 2-point conversion to give Palmdale its first lead of the game in the fourth quarter against Quartz Hill Friday night at Palmdale High. The Royals answered and won the game 13-8.

A lackluster game in which both teams showed signs of playing just their second game in over a year morphed into a game with playoff-like intensity.

Quartz Hill scored the winning touchdown with three minutes and 36 seconds remaining in a 13-8 Golden League victory over Palmdale.

The newly christened Royals (2-0) led for most of the game with a second-quarter touchdown, but the Falcons (0-2) took their first lead with a stellar scoring drive midway through the fourth quarter.

“I was pleased. I was very happy,” Quartz Hill football coach James Vondra said. “Like I told the guys, they showed grit on both sides of the ball. Palmdale got that one drive. Our defense was just out there too long, missing tackles and they caught us on that one long run there and put them in position to put some points on the board for them. I think for the most part, we controlled the night, as far as offense and defense goes.

“I’m just happy we got the win. These guys are preparing to get these victories and they’re playing hard. They are doing enough to get these wins and I’m proud of that.”

The Royals were able to overcome several miscues, finishing with eight fumbles, two of which were recovered by the Falcons.

Quartz Hill also struggled when it reached the red zone. The Royals fumbled and turned the ball over the first two times they were inside the Palmdale 20-yard line.

“It was sloppy, but we got the W,” Quartz Hill junior quarterback Chalin Crawford said. “Not proud of it. We could have fixed things. We’ve just got to practice on finishing in the end zone. A lot of missed opportunities really, that’s what it was.”

The Royals capitalized on their third trip in the red zone.

Crawford threw a 15-yard touchdown pass to junior Markell Bellows over two Palmdale defenders with 1:13 remaining in the second quarter.

“Offensively again we’re struggling when we get to the red zone,” Vondra said. “Last week we had issues against AV and tonight we had issues against Palmdale, so we’ve got to fix that. But these guys are lining up right. They’re executing our plays. I’m proud of it. They’re working hard. In this shortened season, we’re all in the same boat. We’re all trying to get just enough in there to be competitive. We’re happy these seniors get to come out and get one more shot at playing football. We’re also grooming some of these young guys to make sure that we’re ready for next year, too.”

Quartz Hill junior Maddox Hammer intercepted a Palmdale pass early in the second quarter and the Falcons had three fumbles of their own, although they recovered each one.

The Falcons had their best drive starting at the end of the third quarter, beginning at their own 6-yard line.

The Falcons took the lead when sophomore Damrio Jackson scored on the 2-point conversion, giving Palmdale an 8-7 lead with 7:03 remaining.

Jackson had kept the drive alive by converting on fourth down during a fake punt attempt.

“It’s tough. We put ourselves in position to win the game,” Palmdale coach Eric Nickols said. “We went for two. We needed a defensive stop and we didn’t get it. We gave up the big play on the kickoff return and we didn’t get the goal line stop that we needed.

“I told them that I liked the 180 with their attitude and their effort this week. That reminded me of what Palmdale football should be, the way we approached the game this week.”

Unfortunately for the Falcons, they left plenty of time on the clock for Quartz Hill.

The Royals got an ideal start to the drive thanks to a 39-yard kickoff return by senior Maxwell Casey, putting Quartz Hill at the Palmdale 23-yard line.

Quartz Hill retook the lead on the seventh play, which included two fumbles by the Royals and a conversion on fourth and two yards.

Crawford capped the drive with a 2-yard touchdown run up the middle with 3:36 remaining. The Royals missed the kick on the extra-point attempt.

“We knew we were successful in executing our plays, all the way up until we get to about the 20-yard line,” Vondra said. “Then when they gave us the ball, it was pretty much on the 20-, 30-yard line on that last drive. They set us up perfectly. Once we got inside the 10, the guys, they just knew the energy was going to be there. Our lineman, they felt that they were controlling the line of scrimmage and so we just went with our three back set and powered the ball in.

“I think it was because of the confidence that we had in our offense throughout the game. We didn’t feel that we were ever in a situation where they were taking things away from us, we just weren’t executing the way that we felt we needed to.”

Palmdale was unable to make any progress on its final drive.

“It feels amazing,” said Weese, who broke up another pass earlier in the fourth quarter. “We just have to stay locked in on defense and just hold them up and keep doing what we were doing out there.

Woods also rushed for 56 yards on 19 carries, while Jackson ran for 77 yards on six carries.

“I think coaches made a couple of errors there, on calls, personnel errors,” Nickols said. “I’m very pleased with the way the boys came out and played physical. I liked what the defense did. We definitely had the ball on the ground. We just couldn’t get on it.

“We’ve got to clean up some of our penalities. We make a big play and then get called for taunting. We should be a little bit better than that. We have some play makers on the team and they kept us in the game.”