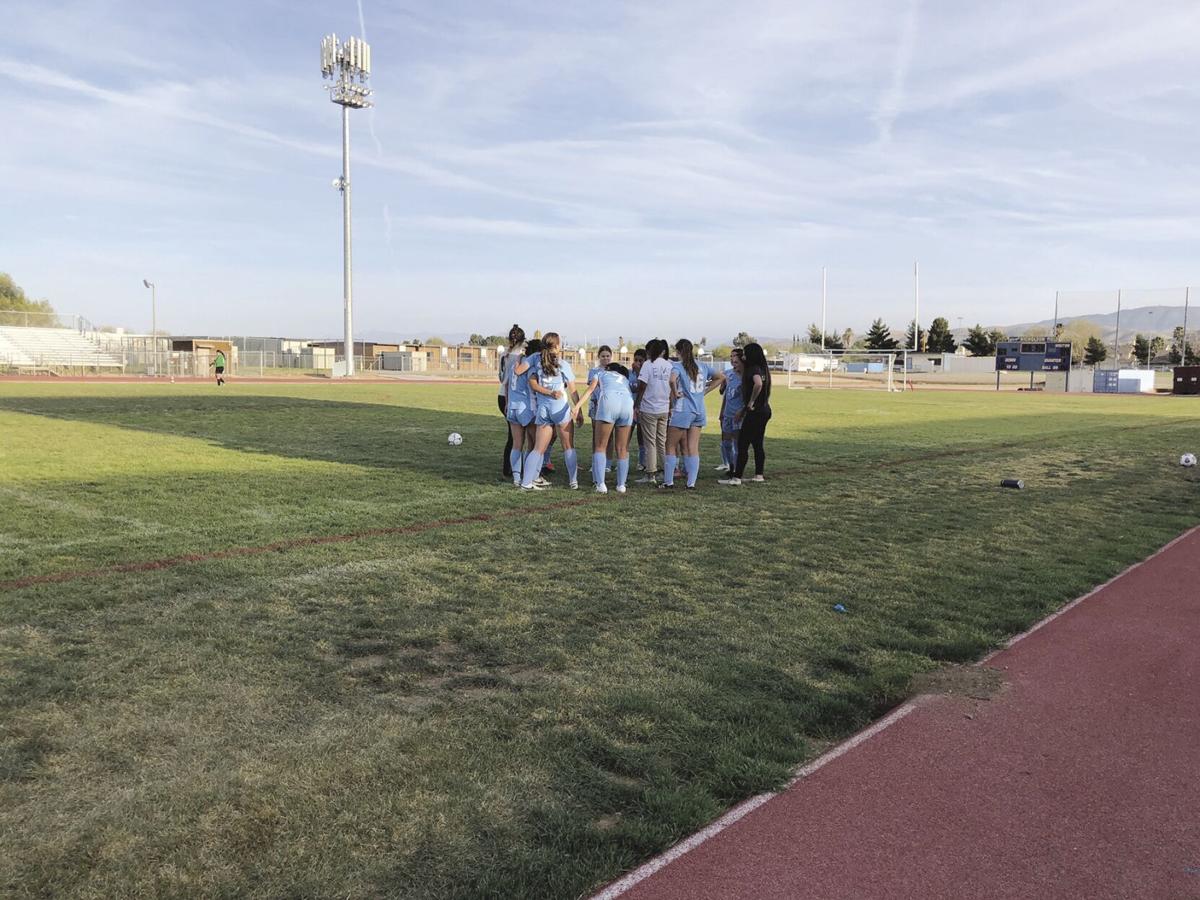 BIG WIN —The Quartz Hill girls soccer team gathers to celebrate a 4-3 victory over Knight on Tuesday. Both teams were undefeated coming into the match, but the Royals now stand alone atop the Golden League standings. 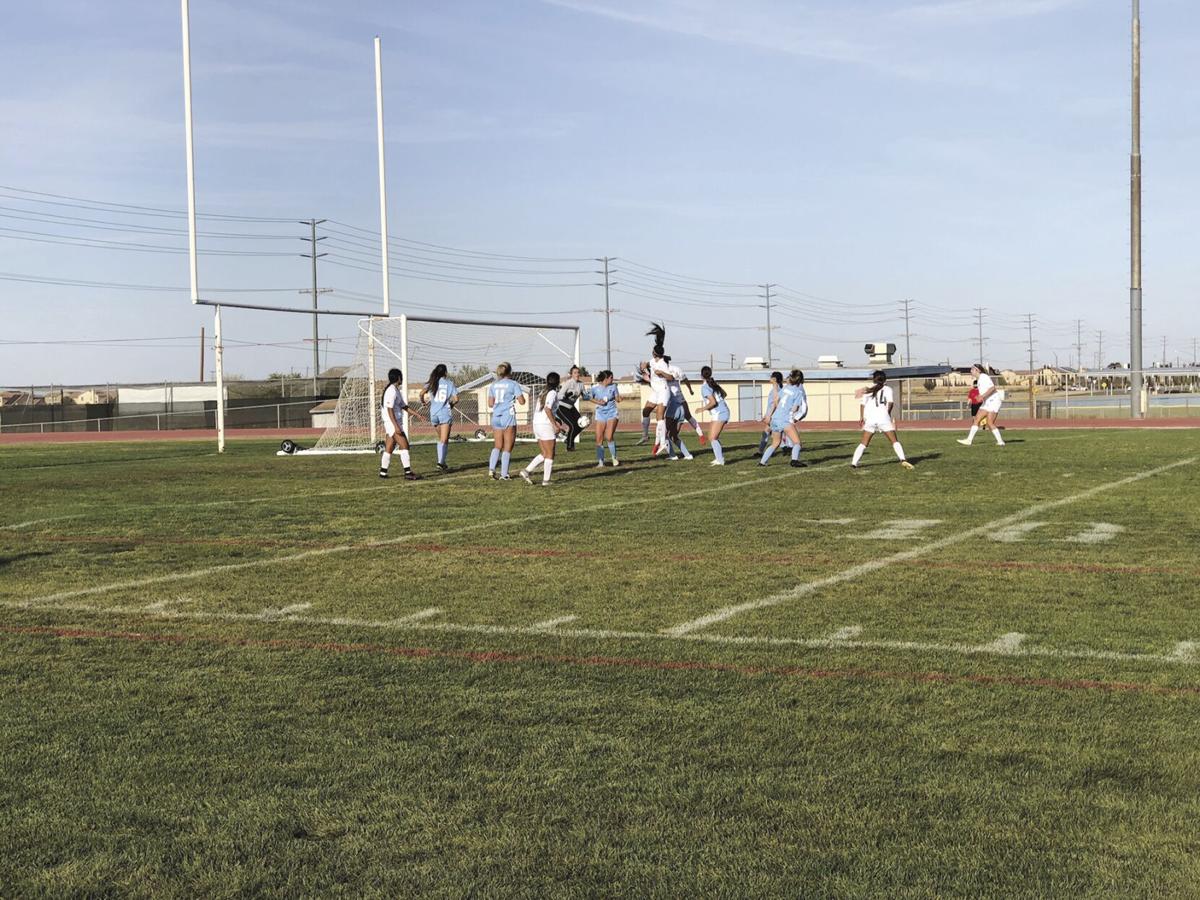 EVENED UP —Knight’s Victoria Martinez, leaping, scores on a header off a throw-in to tie the match 3-3 against Quartz Hill on Tuesday. The Royals went on to win 4-3.

BIG WIN —The Quartz Hill girls soccer team gathers to celebrate a 4-3 victory over Knight on Tuesday. Both teams were undefeated coming into the match, but the Royals now stand alone atop the Golden League standings.

EVENED UP —Knight’s Victoria Martinez, leaping, scores on a header off a throw-in to tie the match 3-3 against Quartz Hill on Tuesday. The Royals went on to win 4-3.

QUARTZ HILL — The Quartz Hill girls soccer team had the last response in a back-and-forth Golden League match against Knight on Tuesday night.

In a tightly contested game between the last two undefeated teams in league, the Royals scored in the final minute of regulation to break a tie and score a 4-3 victory over the Hawks at Quartz Hill High School.

Kott chipped in the ball with her left foot past a charging Knight goalie.

The freshman, who has eight goals in four games, said the key was having the right mindset to score.

“To not get in my own head. To not have personal battles,” Kott said. “That’s the most important thing is the mentality, because everything else will work out. You have to have trust in your teammates.”

Kott scored in the opening minutes of the second half, on a header after Knight led 1-0 at halftime.

Kott gave Quartz Hill a 3-2 lead midway through the second half on another chip shot after getting the ball past the Knight keeper, leaving her with a wide-open shot.

“It was very stressful, but again you have to keep your head high, because if you get down on yourself or down on your teammates, they can see your weaknesses and then they can play them up,” Kott said.  “To come in strong and press. High intensity and just come in like a team and confident, but not cocky.”

“I’m really proud of the girls,” Quartz Hill coach Arika Ontiveros said. “They continue to remain calm and composed throughout the entire game, even though we had to change rhythms. They found a way to come back through hard work. Pete Knight gave us a really good game. They showed true character as well. They never stopped. We never stopped. At the end of the day, we found a way to win.

“It was super competitive. We know that Pete Knight is our biggest competition out here, so we just continue to remain calm and play our game.”

“It’s all about mentality at the end of the day, who wants it a little bit more” Ontiveros said. “Just team effort and teamwork and we found it.”

Quartz Hill senior Anaya Respeto scored the second goal for the Royals, in the first 10 minutes of the second half, on a free kick from 30 yards out to the top right corner of the net that the Knight goalie was barely able to deflect. The goal tied the game at 2-2.

Knight sophomore Victoria Martinez scored at the end of the first half to give the Hawks a 1-0 lead. Martinez finished with two goals.

“The girls did a good job,” Knight coach Juan Paolo said. “You can’t make any mistakes. Games like this, we talked about it before the game, errors is what loses games like this, usually. Matter of fact, I talked to them before the second half started. ‘The hardest 10 minutes of the game is the first 10 minutes of the second half.’ You coming back from resting. You have a lead and they got us twice in 10 minutes. We’ll hopefully learn and all we know is they’re coming to our house.”

Knight junior Kemberley Flamenco scored early in the second half, answering the Royals’ quick goal, to give the Hawks the lead.

Martinez scored on a header off a throw-in by junior Taliyah Parker midway through the second half to tie the game at 3-3.

“We had a great game,” Paolo said. “We had a good game. The game went back and forth obviously. I thought a couple of miscues in the back. There shouldn’t be any balls crossing the six-yard line untouched. That’s something that should have never happened. I give it up for a couple of mistakes. We stayed with it. They just scored in the last, what 30 seconds of the game.”

Quartz Hill plays at Littlerock on Thursday, when Knight plays at Eastside, which entered Tuesday with one loss.