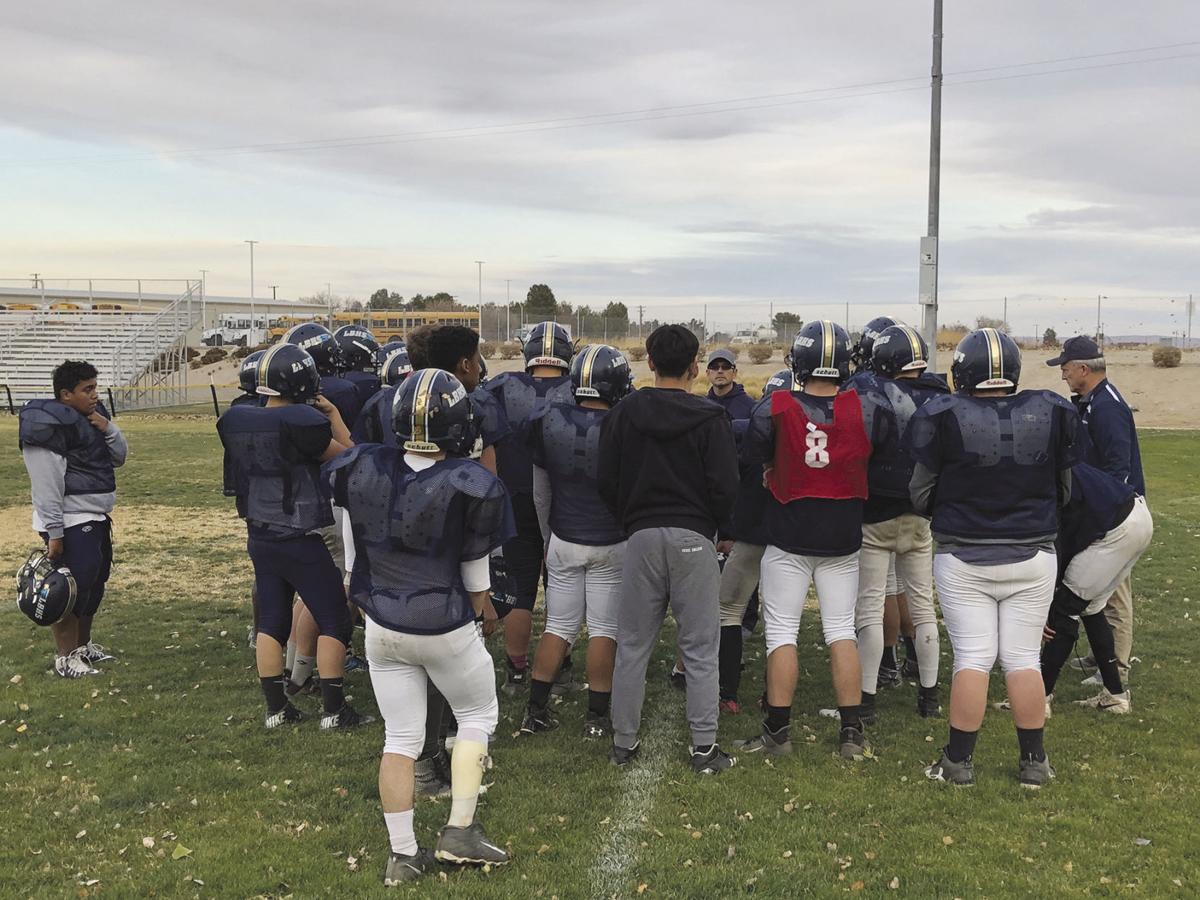 TEAMING UP — The Lancaster Baptist football team gathers together for instruction from their coaches during Tuesday’s practice. The Eagles travel to Bloomington Christian for a CIF-Southern Section 8-man Division 2 title game today. 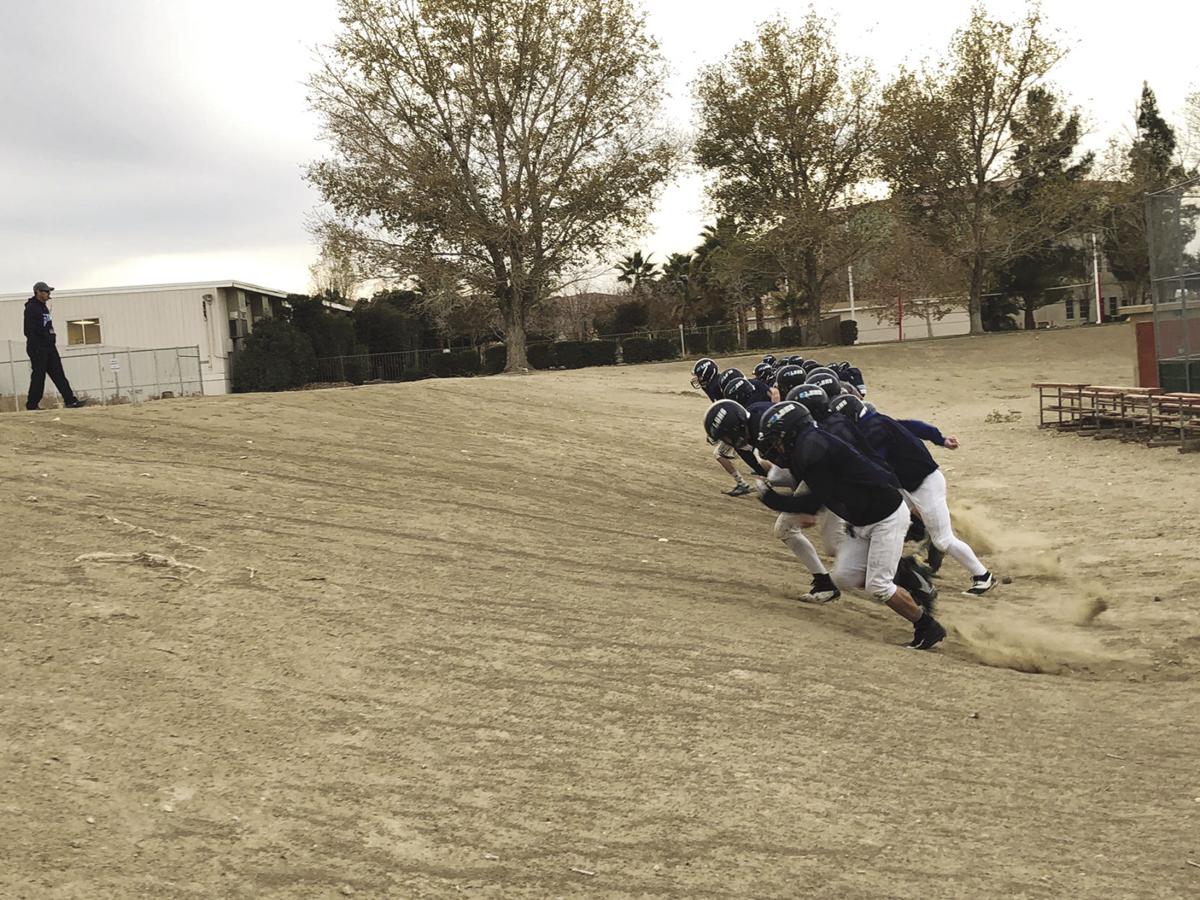 UPHILL BATTLE — The Lancaster Baptist football team runs up a hill during practice for the CIF-Southern Section 8-man Division 2 title game on Tuesday.

TEAMING UP — The Lancaster Baptist football team gathers together for instruction from their coaches during Tuesday’s practice. The Eagles travel to Bloomington Christian for a CIF-Southern Section 8-man Division 2 title game today.

UPHILL BATTLE — The Lancaster Baptist football team runs up a hill during practice for the CIF-Southern Section 8-man Division 2 title game on Tuesday.

LANCASTER — The Lancaster Baptist football team and coach John Alvarez relied on past players to get where the Eagles are this season.

Alvarez believes in having his more experienced players teach the newer players, not just in teaching fundamentals at the beginning of the season, but in what to expect in a championship game.

The Eagles (8-2) will depend on that passed down knowledge today, as they play at Bloomington Christian (9-1) for the CIF-Southern Section 8-Man Division 2 championship at 7 p.m..

It is the fourth championship game appearance for Lancaster Baptist since 2014.

The Eagles have several players still on the team that were on the 2017 championship team that beat Laguna Blanca 42-20.

It will be the third championship game for Lancaster Baptist senior Jacob Wheatley, a four-year lineman who was on the team his freshman and sophomore years when the Eagles played in the title game.

“It’s always tough getting there,” Wheatley said. “It’s a grind every year, but the seniors always teach you something. You learn something from every senior, especially my sophomore year, their drive and their work ethic.

“The seniors played a big part in how I am today, especially my freshman year. Brannen Goodman and Ellis Coefield, they taught me so much. Landon Cox, my sophomore year, they taught me pretty much how to block, just starting out the fundamentals.”

The Eagles have 10 players who were on the 2017 team that advanced to the championship game, although only a few played in that game.

“They see what it takes to get there, because it’s not easy. It’s not easy to get to a championship game,” Alvarez said. “I think when the younger boys see what the older boys are doing and to see where that work has taken them, they understand now that they are juniors and seniors, they’ve got to be the example to the younger guys, so that maybe their junior and senior year we’re in the same spot again. We’ve got 12 seniors on the roster, so someone else is going to have to step up next year and take what they learned from those guys and funnel it down to the younger guys.

“Part of that is the coaching staff’s responsibility, but a lot of it I think bears on the players themselves. Some things we can coach and some things I want the players to coach. The hard work they put in should be what is being taught by them. How to get to the next level. How to make it through a tough game or even a tough practice, especially in the summer time when it’s blazing hot. How do you make it through something like that. Well, you look to your buddy or you look to your teammate. If your teammate can do it, then you can do it.”

The Eagles had to learn some of those lessons the hard way when they advanced to the championship game in 2014 and lost to Joshua Springs 42-6.

“A lot of luck goes into it I think, health wise,” Alvarez said of a deep playoff  run. “I think the right mind set week after week comes into play, especially after a loss. How to get back on track. How to keep the goal in mind, even though you may have been detoured a little bit. How to get back to where you want to go.

“With us, we had to play a few games where we had to struggle a little and fight. Some games not so much, but in others it was a real struggle competitively and I think that has helped us to get through a game like last week with Hillcrest.”

The Eagles scored a 51-48 victory against Hillcrest Christian last week in the semifinals.

Hillcrest Christian was able to rally to take the lead in the game.

“I didn’t see any fear in their eyes. I didn’t see any ‘We’re in trouble’ expressions or body language,” Alvarez said. “They just kept playing. Good enough to win it in the end.”

The Eagles did see improvements to be made after the narrow win over Hillcrest Christian.

“Overall as a team, our offense did really well,” said Lancaster Baptist senior Chris Huygens, a second-year varsity player. “Our defense, we’ve got to work on our pass coverage a little bit, clean that up and we would have had a lot bigger win.

“It’s just working together. We’ve had a lot of hard work. A lot of effort has gone into this. Coaches have put in a lot. A lot of guys have been willing to work, just get up and work. It was a combination of everything. Just everything has come together.”

The Eagles have come to expect more of themselves, with the high bar past teams have set.

“This is the goal we set out at the beginning of the season and we just need to accomplish that goal, winning this game,” said Lancaster Baptist senior Andrew Sandoval, a second-year varsity player. “I feel confident about it as long as we play our jobs. We should have a good game.”

Lancaster Baptist has faced challenges this season, losing the second game of the season to Mojave, 43-12. The Mustangs went on to win the CIF-Central Section 8-Man championship.

The Eagles rebounded to win three straight games, but lost a heartbreaker at home to Santa Clara, 32-28.

“We definitely did have some learning points,” Sandoval said. “We’ve won big together and we’ve lost big together, so we definitely know how we should play against tough teams, so it’s definitely helped us. It shows what we’re capable of doing.”

“It would be the coaching, definitely,” Wheatley said. “The coaches are always very adamant in their game plan and what they have set for us for the week. It’s always different for every team, because every team is not the same.”

While Lancaster Baptist, the No. 2 seed in the bracket, had a tough game against Hillcrest Christian on the road in the semifinals, No. 1 seed and defending champion Bloomington Christian won a wild shootout, 74-72.

“Very fluid offense. They run,” Alvarez said of Bloomington Christian. “A lot of misdirection stuff. Trying to keep you from knowing who is running the ball. Efficient. They’ve got three or four guys that can handle the ball, whether it is catching it or running with it. They’re definitely a threat to score. Goal one is to shut them down or limit them, limit their offense.”