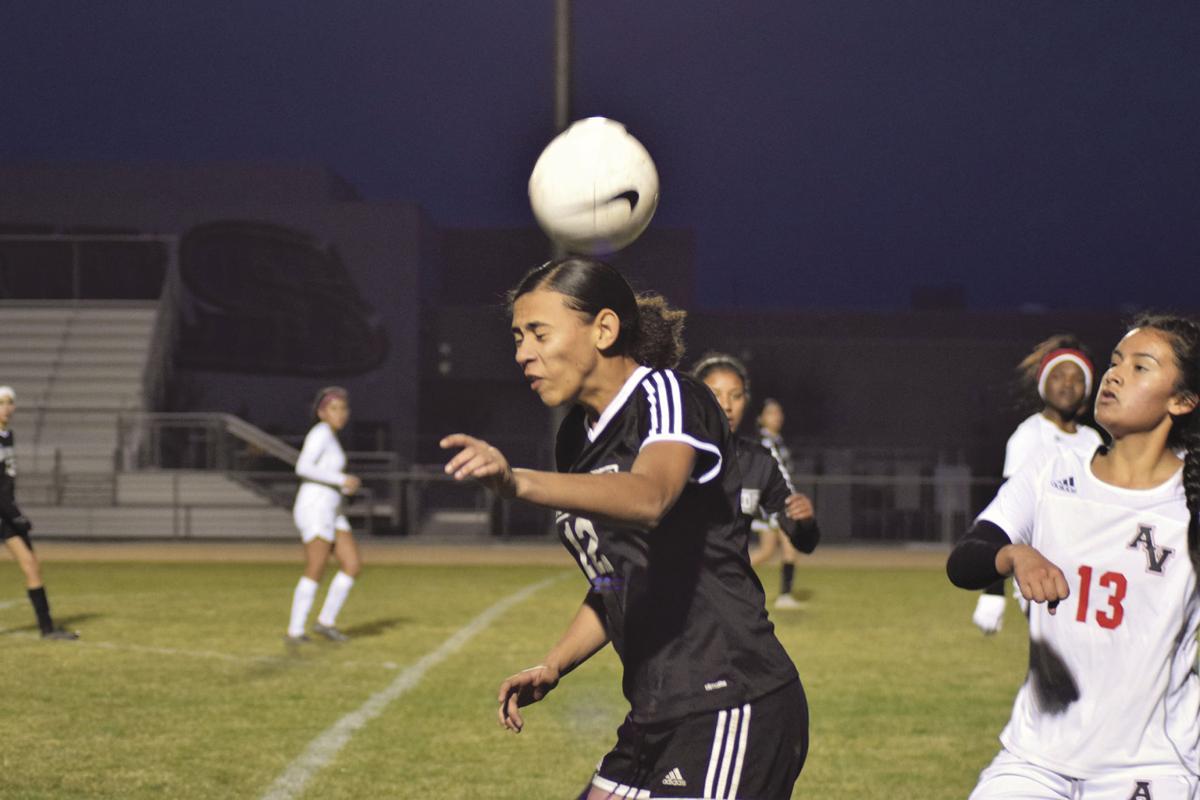 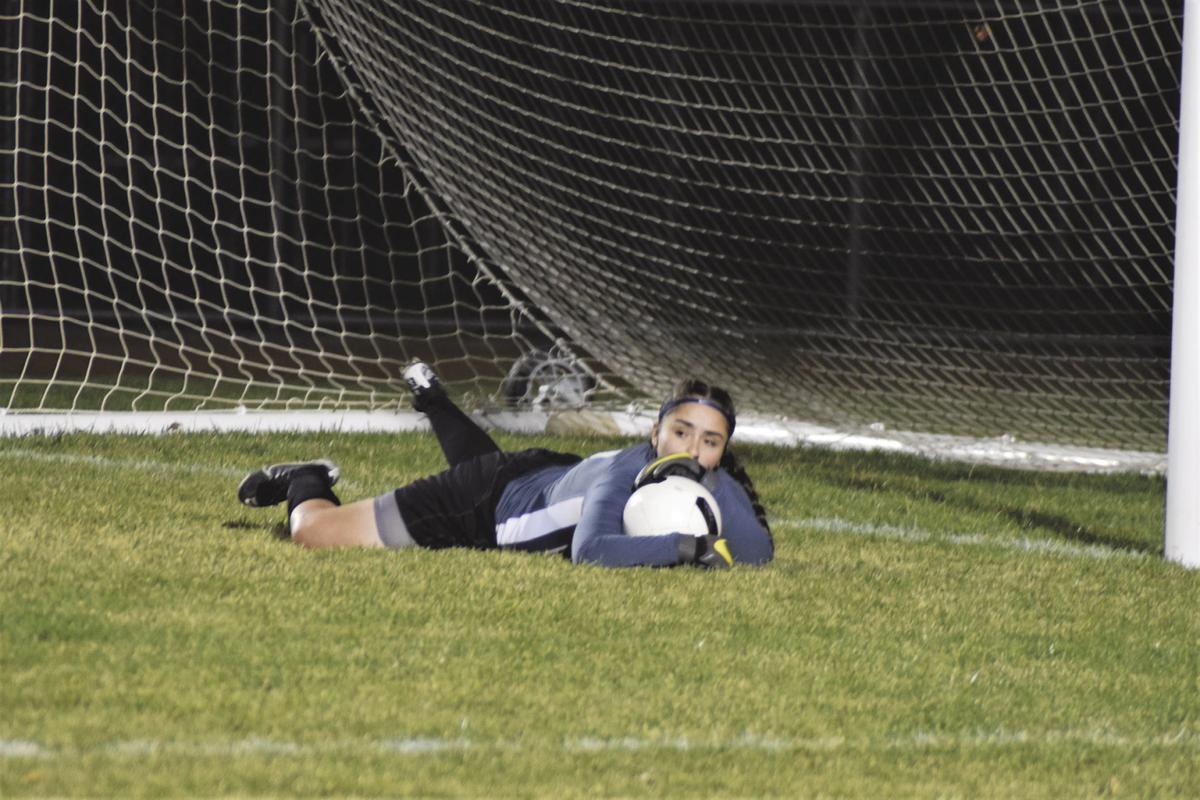 SAVED — Antelope Valley goalkeeper Anita Artiga makes a save against Eastside in the Golden League opener on Tuesday. Eastside won 2-0.

SAVED — Antelope Valley goalkeeper Anita Artiga makes a save against Eastside in the Golden League opener on Tuesday. Eastside won 2-0.

LANCASTER — The Eastside girls soccer team had no preparation to defend their Golden League title.

The Lions’ season opener on Tuesday night was also their first league match, but Eastside rose to the challenge.

Eastside senior Angeles Escobar scored in the seventh minute and added a goal in stoppage time to give the Lions a 2-0 victory against Antelope Valley at Eastside High School.

“I don’t think we came out the strongest, but this is what is going to get us ready for the end of the league,” said Escobar, a four-year varsity player. “As long as we do better. We learn from every game and every mistake that we have.”

The Lions did have a strong start, with a few shots in the first few minutes.

Escobar scored in the seventh minute from 10 yards out on an assist from Xitaly Vargas.

“We have to practice more in the field and take our team more seriously, as we saw in this game and just learn from our mistakes,” Escobar said. “That’s the only thing we can do.

“It’s not a strong start, but we have to learn from these mistakes. We know that every team is going to come strong and we want to hold that title. So we’re going to work hard for it.”

“I think that definitely AV put up a good defense,” Eastside coach Ashley Singh said. “I think that we did a good job passing and moving the ball around.”

The Lions had 18 shots and AV senior goalie Anita Artiga made 16 saves.

Celine Recinos made three saves in goal in the first half for Eastside, while Akaccia Wagnor did not face a shot in the second half.

Eastside’s Delia Bocanegra had a shot deflected by Artiga in the 50th minute, hitting the cross bar. Eastside’s Alexa Shearer was unable to get to the rebound before Artiga.

Eastside’s Paola Figueroa had a shot from 10 yards out in the 59th minute that Artiga initially juggled, but held on.

AV senior Paola Vincent broke up a breakaway by Eastside’s April Jimenez in the 60th minute.

Antelope Valley senior Alona Chapman was hit in the chest, blocking a shot from five yards away in the 76th minute.

Chapman was taken to the hospital following the game. She could be heard gasping and coughing from across the field.

Chapman was a force on defense for the Antelopes, breaking up several offensive opportunities for the Lions.

Just four minutes after Chapman left the game, Escobar added her second goal from 10 yards out.

“I think the girls have been coming out to practice and everything they’ve been practicing definitely showed on the field today. Just a lot of touches and a lot of good passing, communication,” Singh said. “All the things we really stress at practice, we saw today in the game.”

The Lions lost two starters and a total of six players to graduation from last year’s Golden League champion team.

“We have a fairly young squad, a lot of sophomores and juniors and a couple of freshmen out there,” Singh said. “This year we have three seniors playing varsity, so we definitely want the girls to follow their lead.”

Eastside will play at Quartz Hill on Thursday and play in a few tournaments this month.

The Antelopes (0-2-1), which finished fourth in the Golden League last season, had two preseason matches before the league opener and will host Highland on Thursday.

Antelope Valley had only a few offensive opportunities, especially in the first half.

AV sophomore Paulina Martinez couldn’t get separation during a possible breakaway in the 36th minute and freshman Christina Arechiga had a shot sail wide right in the 64th minute.

“This game was tough,” Antelope Valley coach Thannia Huerta said. “They played well. They actually kept their shape and did what I asked to minimize the shot opportunities that Eastside had. They had a lot of shots.

“I’m really proud of them. I didn’t get to express that to them, because obviously we had an injury, but they know. I’m for sure going to tell them tomorrow that we did an amazing job. They did phenomenal today. They did what (I) asked and that is a big part of this too. They stayed disciplined. The outcome will come.”