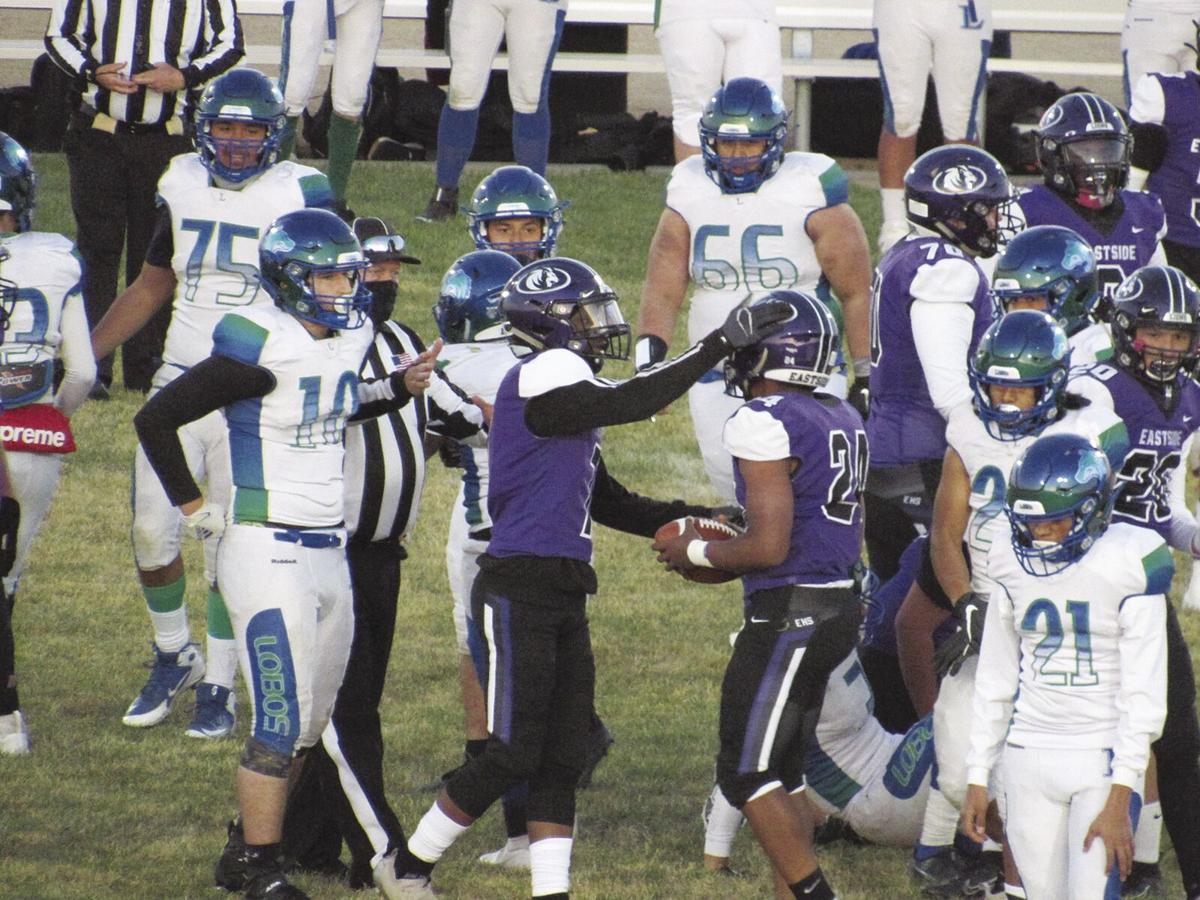 GOOD JOB — Eastside junior Quincy Johnson (24) is encouraged by a teammate during the Lions’ 6-0 victory over Littlerock on Friday night at Eastside High School. 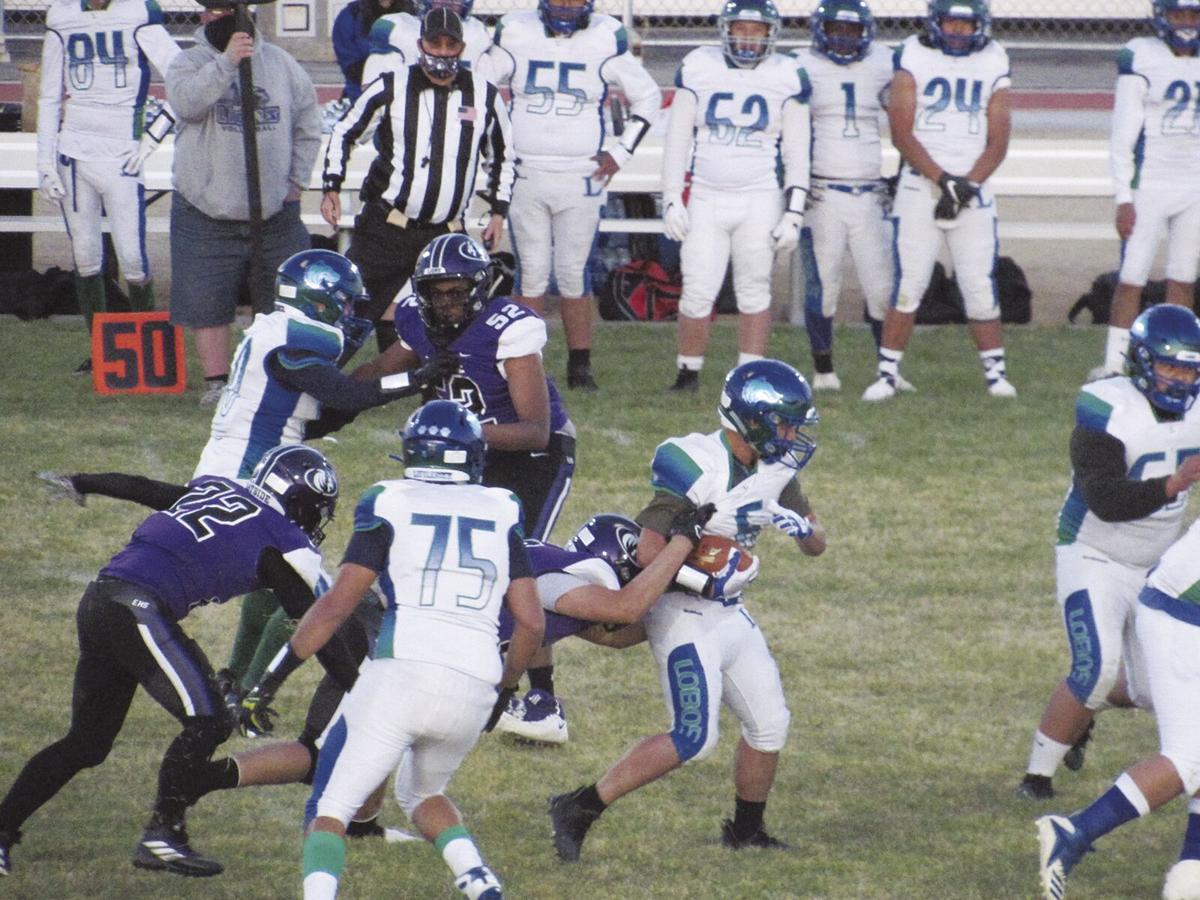 TOUGH YARD — A Littlerock football player carries the ball with an Eastside defender attempting a tackle during a Golden League game at Eastside High on Friday night. Eastside won the game 6-0.

GOOD JOB — Eastside junior Quincy Johnson (24) is encouraged by a teammate during the Lions’ 6-0 victory over Littlerock on Friday night at Eastside High School.

TOUGH YARD — A Littlerock football player carries the ball with an Eastside defender attempting a tackle during a Golden League game at Eastside High on Friday night. Eastside won the game 6-0.

LANCASTER — It was one play.

One play that separated Littlerock and Eastside.

That one play with only seconds left in the first half turned out to be the game winner.

Defenses dominated on both sides for the entire 48 minutes. But in the end it was one penalty followed by a missed assignment on defense by the Lobos which led to the only score of the game propelling the Lions to a 6-0 victory over Littlerock, Friday night at Eastside High School.

It was a tale of two weeks for both teams. The Lobos (1-1, 1-1) had 354 total yards and 35 points in a victory against Lancaster. On the opposite side of the ball Eastside gave up 58 points to Knight.

It was much different in the Lions home opener as they allowed a miniscule 45 yards of total offense and kept Littlerock in check the entire night. On the Lobos final play inside the red zone quarterback Peter Zamudio’s pass attempt to Carlos Banuelos was incomplete preserving the shutout for Eastside.

“We made some defensive adjustments from last week. We lost to them last year so it was good to get the win tonight,” Lions head coach John Quam said. “The kids played four quarters of football. We knew this was going to be a hard game. I’m very pleased with this win.”

Time of possession was a key factor as Eastside kept the ball out of the Lobos hands holding them to only 33 offensive plays. The Lions (1-1, 1-1) weren’t much better offensively as they combined for 154 yards of total offense.

“It goes down to the coach, myself, calling a bad game. I’ll take the blame. I think we were looking too far ahead to Knight,” Littlerock head coach Joe Carnevali said. “Last week we were able to open it up. I think I relied too much on the passing game tonight and I need to put my faith in the run game. I didn’t get the ball in Carlos’ (Banuelos) hands enough.”

Eastside took over late in the first half near midfield. Following a personal foul face mask penalty, the ball was moved to the Lobos’ 30-yard line. On third down Lions quarterback Cameron Bailey, who had thrown only one pass prior, connected with Kayden Williams at the 10-yard line and Williams did the rest dancing his way into the end zone with 17 seconds remaining before halftime. The failed 2-point conversion gave the Lions a 6-0 lead.

Bailey finished the game 2-of-5 for 26 yards with one touchdown and one interception. He also rushed 10 times for 20 yards. His counterpart Zamudio, who tossed for 229 yards and two scores in last week’s victory against Lancaster, was 6-of-13 for 22 yards.

“Tonight was a good bounce back win for us. It wasn’t a perfect game, but it’s good to get the win. I know I could have played better and I will do better for my team,” Bailey said. “We have to learn from our mistakes and come back better next week. I thought our defense played very well.”

The Lions had a golden opportunity to increase their lead as they moved the ball inside the 5-yard line. However, a couple of penalties moved the ball out of the red zone and Bailey was picked off by Banuelos halting any scoring chance.

The Lobos had one final opportunity as they moved the ball to the Lions 19-yard line. On fourth down Zamudio’s pass in the end zone to intended receiver Banuelos was knocked down as Eastside took over on downs.

“Offensively we needed to move the ball a lot more and we have to be more disciplined. We shouldn’t have let them score and when they did it brought the whole morale down,” Zamudio said. “I think we came out thinking we should win this game. We can definitely learn from this.”