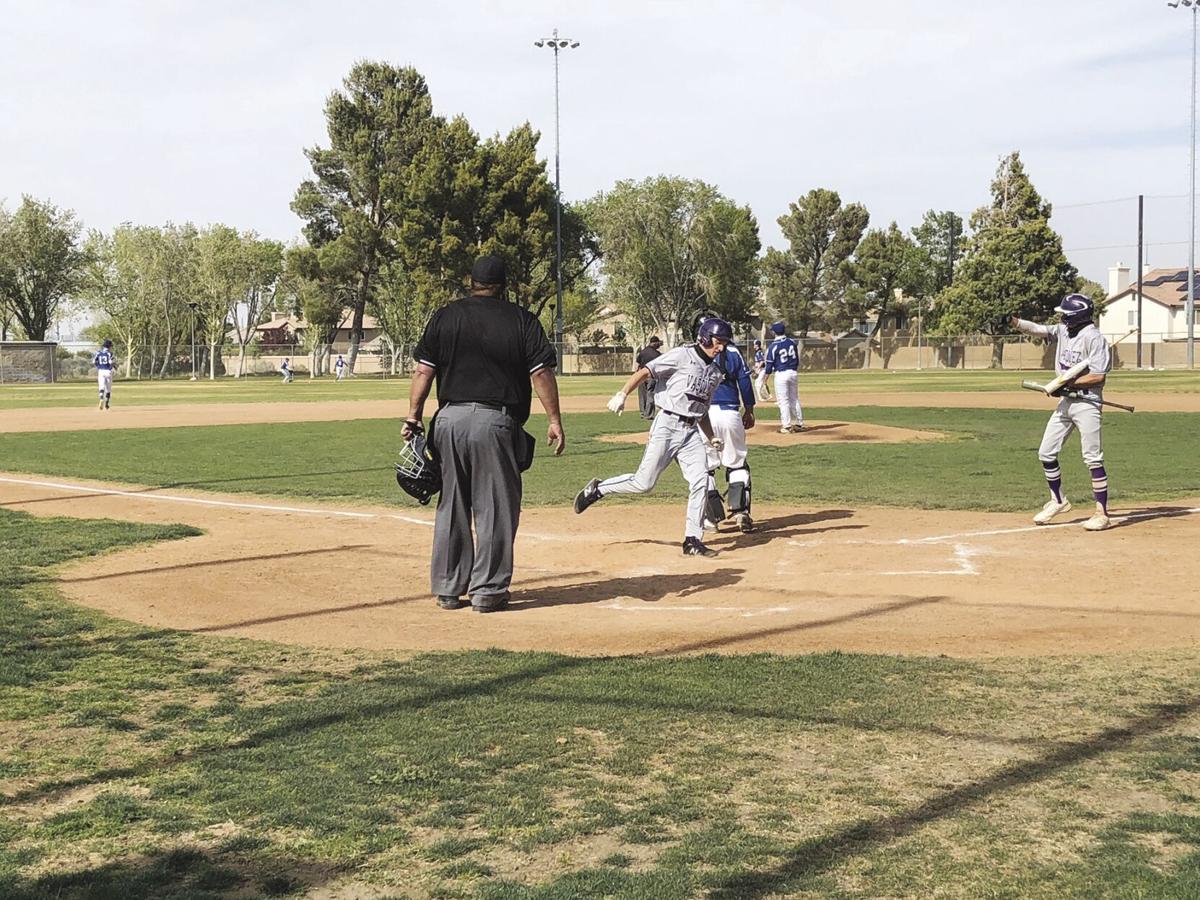 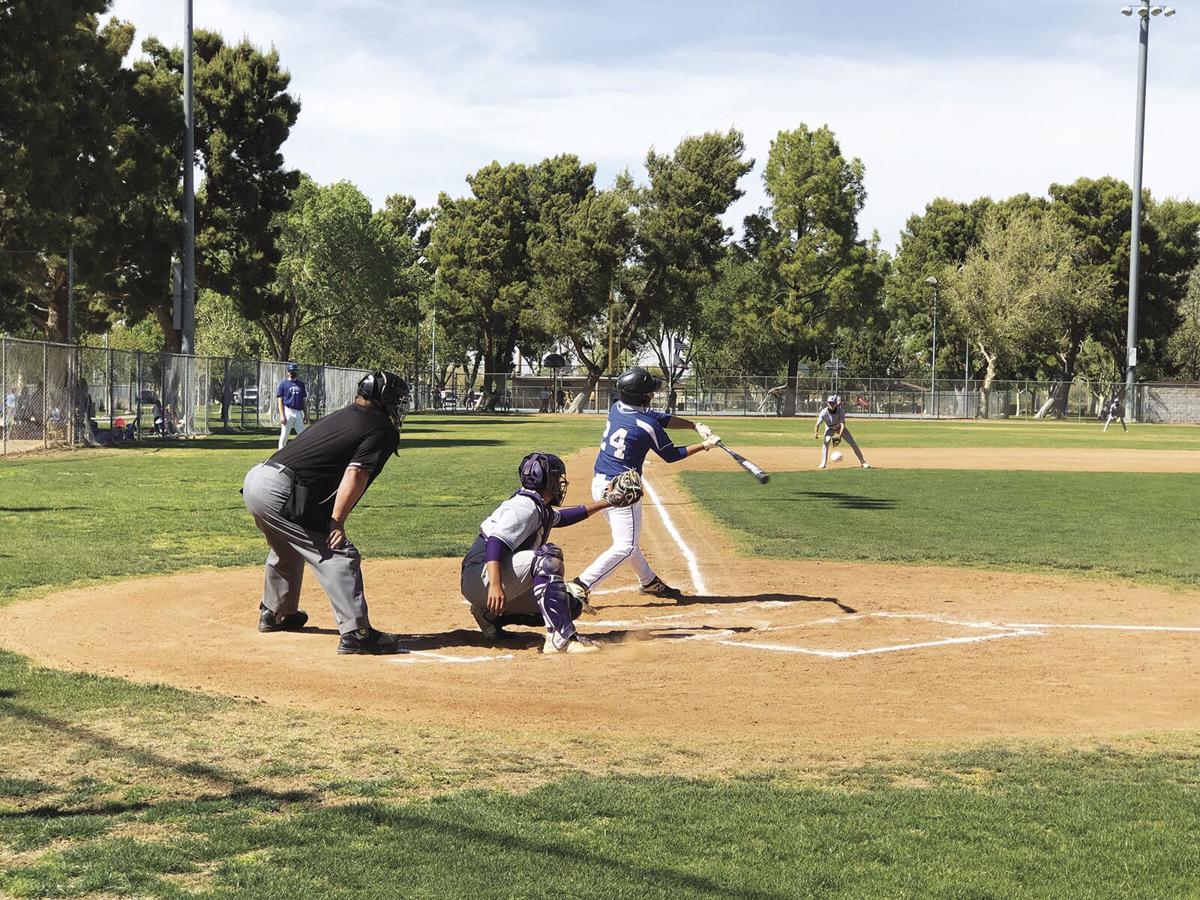 LANCASTER — It is still early in the baseball season, but traditional rivalries are beginning to heat up with the temperature in the Antelope Valley.

Desert Christian and Vasquez were locked in a tight Heritage League game before Vasquez, ranked No. 1 in the latest CIF-Southern Section Division 7 poll, began to have success at the plate.

The Mustangs rallied from an early deficit with three runs in the third and four in the fourth inning to pull away for a 10-6 victory over Desert Christian on Tuesday at Rawley Duntley Park.

“The first couple of innings, I was disappointed a little bit,” Vasquez coach Sheldon Sparks said. “We didn’t have good energy. DC is legit. They’ve been our school rival and it’s been that way for 15, 16 years. Any time we show up and we play them, they play us hard and tough. I don’t know if my guys believe that, so we started out a little slow.

“After that third inning, we kicked it into gear and started hitting the ball very well. I was very pleased with our bats again. Our pitchers threw strikes. In this league and our division, that’s all you have to do. If you throw strikes, you’re going to be very successful. Today proved that again. I couldn’t be any more pleased with Alex.”

“I think I did pretty solid,” Soberanis said. “Probably could have thrown the ball a little bit harder. (We had) a couple of mistakes here and there, but good overall.

“We struggled here and there on hitting to start league. Defense struggles every once in a while as well.”

The Knights (7-1) took an early lead with an RBI single by freshman Oskar Medina in the second.

The Mustangs (7-1) answered with three runs in the top of the third. Senior Van Johnson scored on a wild pitch and senior Nathan Swoger scored on an RBI single by senior Kyle Johnson, who scored on an error.

“I feel good. We’re a good hitting team once we get started,” Swoger said. “We’re a good defense. Some of our players are sick or hurt. Our first baseman got hurt a couple of games ago, so now our third baseman is playing first. It’s a little bit getting used to.

Both Swoger and Johnson went 2-for-4 for the Mustangs and helped keep the momentum going in the fourth inning.

Vasquez sophomore Mason McConnell started the inning by getting hit by a pitch and ultimately scored on a balk, senior Nathaniel Duncan followed with a walk and freshman Alan Soberanis reached on a fielder’s choice to load the bases with no outs.

“We’re not there yet. We haven’t played our best baseball,” Sparks said. “Our soccer team is taking some of our baseball players, so they’re not getting any practice. You can see. We’re still not a complete team yet and we probably won’t be for another three or four weeks, but I’m pretty pleased with where we’re at.”

Desert Christian began chipping away at the lead.

Desert Christian senior Isaac Acosta hit an RBI triple in the fifth and scored on a balk.

Freshman Jase Pfeil led off the sixth with a walk and later scored on a wild pitch, cutting the deficit to 7-4. Pfeil went 2-for-4.

“There are many aspects where they played well. I’m proud of them for that,” Desert Christian coach Adam Zeko said. “But there’s times where the energy got low and obviously they weren’t playing the way baseball should be played.

“Just keep the energy up throughout the game. We had a rally late in the game and they were doing well. We just need to keep that throughout the whole entire game.”

Vasquez answered with three runs in the top of the seventh.

Junior Randy Sanchez and McConnell hit back-to-back RBI triples with two outs and Duncan followed with a one-run single to give the Mustangs a 10-4 lead.

Desert Christian added two runs in the bottom of the seventh, on back-to-back RBI singles by sophomore Jordan Barnes and Medina, but Vasquez reliever Kyle Johnson retired the final two batters to end the rally.

Desert Christian freshman Cayden Cincis threw 2.2 innings of scoreless relief, striking out four and giving up two hits and no walks after entering the game in the fourth.