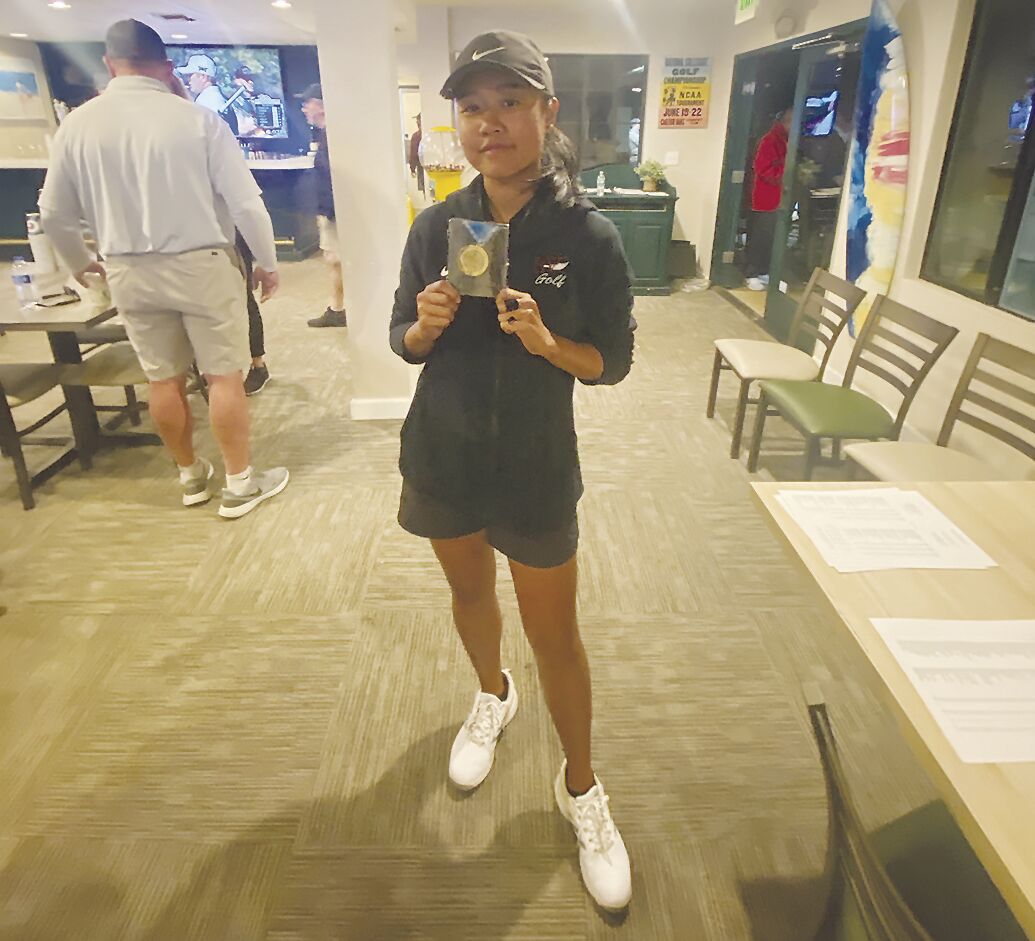 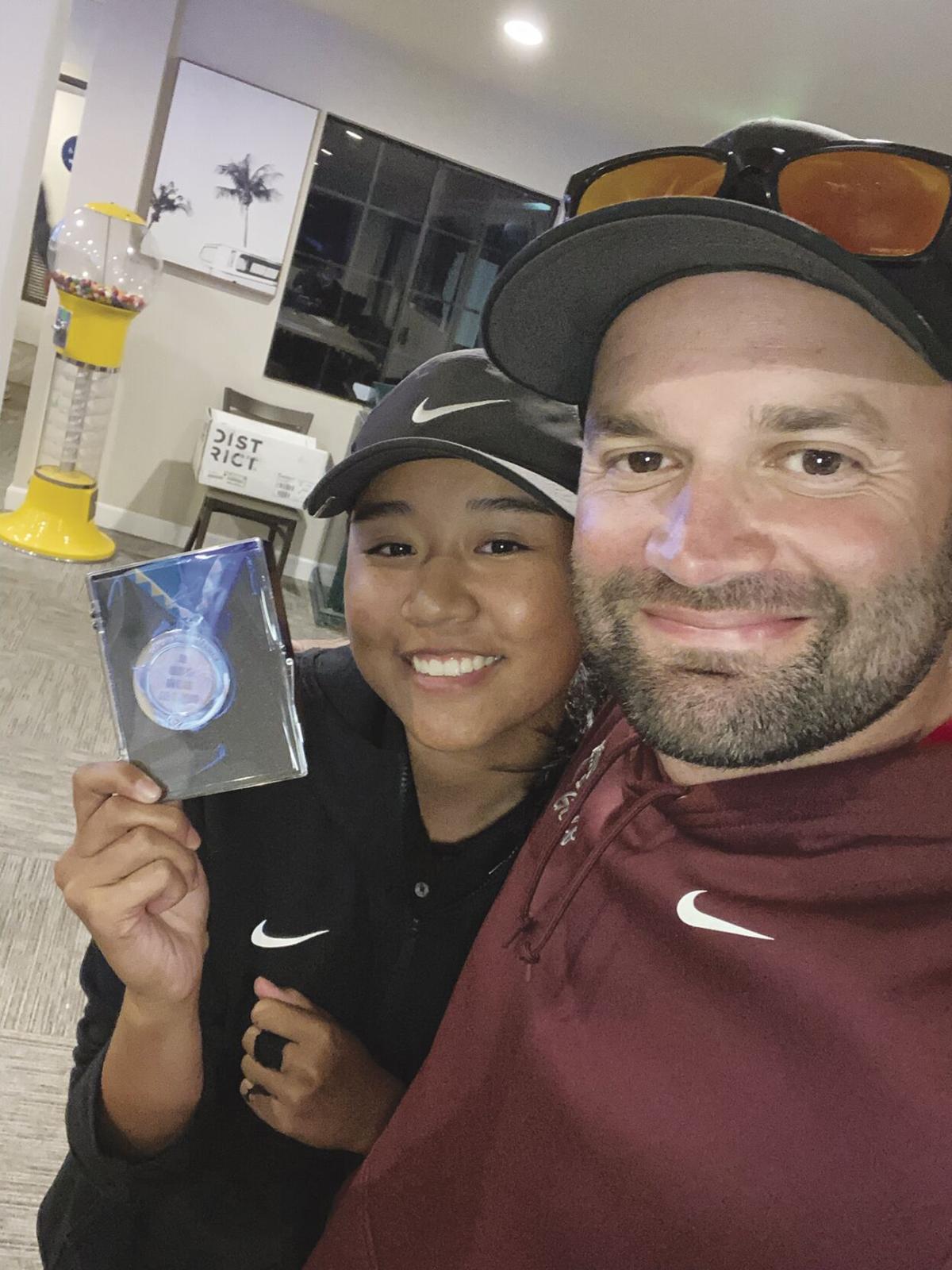 The Antelope Valley College women’s golf team piled on historic accomplishments throughout the season and ended with another.

The Marauders made their first appearance as a team at the CCCAA Women’s Golf State Championships, finishing seventh, and brought home the individual state champion Arlene Salvador.

The sophomore is the first state champion in AVC women’s golf history.

“To be able to do what I just did, I’m still in shock,” Salvador said after winning the title on Monday. “I can’t even believe that I did what I did. That’s thanks to everything that I’ve gone through. I couldn’t be more happy, more appreciative.”

It was a feeling of relief for Salvador, who just missed going to the CIF State Championships all four years at Highland High School. It was something, she said, that drove her to give her all at the state tournament at Cypress Ridge Golf Club in Arroyo Grande Sunday and Monday.

“All the hard work, the tears, the laughter,” she said. “Everything that I had I have put into this tournament without a doubt. It has opened up a new door for me. I know that feeling of loss. I know what it’s like to lose, I know what it’s like to be on the losing side and to finally see that everything I’ve done has finally paid off, it’s such a relief. It feels like a great accomplishment.

“It’s something that I can look back on and say this is where I gave it my best and it showed. That bit of encouragement, that confidence and everyone and everything has led me to where I am today. I don’t regret anything, any of my losses, any of my mistakes. I’ve taken those experiences into something that I can grow from and mature from and I can see that through the progression of my years in golf.”

Salvador, who was also the undefeated Western State Conference champion, shot a two-day total of 5-under 139, which is the lowest under-par score in at least the past 25 years of the tournament.

“She played her best golf when it mattered most and believed in what she was doing,” AVC coach Patrick Londono said. “It’s a really proud feeling to see someone with the talent level of Arlene maximize her potential at the most important time.”

Salvador began the tournament with a 4-under 68 on Sunday, the only golfer to go under par that day. She said she was in “No think, just do” mode.

“It’s like you don’t even think at all,” she said. “You have like one or two things in your mind and you are going, you are rolling. … If I could repeat that exact same round again, I would not be able to. … It was such a blur.

“It was where I swung some of my best swings and where I played some of my best golf, especially with how undulating and how much of a hike Cypress Ridge was all the way out there, far from home, I couldn’t tell you much except I gave it my best and I tried to look up from my mistakes. I tried my best not to overthink and play every shot as is. Any negativity, I just simply wiped from my mind.”

Salvador followed up the first round with a 1-under 71 in the second round on Monday, despite some unique weather challenges on the hilly course. Monday’s temperature, much like Sunday, reached into the high-70s until halfway through the round when a dense fog turned the day around.

“Suddenly we get a dense fog warning,” Salvador said. “Everything is just covered in fog, the ground’s wet, we’re all shivering and cold trying to finish our round. Somehow we played through that. … It was all about endurance that second day.”

Something that helped Salvador pull through was her preparation in practices leading up to the tournament.

“One of the things that I made sure to do was have consistency throughout this entire practice week before I went out to state,” she said. “I just tried to make sure that consistency was key and that I could replicate the same swing over and over again and have a go-to shot for everything.”

Having that confidence was really all Londono wanted for the golfer he also coached in high school.

“It was a phenomenal tournament. We prepared the ways in which we were going to attack the golf course and she executed,” Londono said. “Most importantly, I just wanted her to believe in everything she was doing and believe in her preparation and live with the results past that.”

“This was the first tournament and first big tournament without him and without that guidance,” Salvador said. “I think that’s another step into adulthood and learning and being on my own and being an individual.”

She said she always looked back at her dad during tournaments to get reassurance from him. But without him, Salvador summoned all of the knowledge and skills she has learned in the past 14 years of playing golf, which helped her “dial in and just stay in the zone.”

When the tournament was over and she handed in her card, she called her dad and told him, “I think I just won state.”

It was an emotional call and Salvador choked back tears as she recalled it.

“It was just the weirdest feeling ever,” she said. “Him trusting that I could do good and go out there. It was a relief.”

The first day of competition was called due to darkness with four Marauders still playing. Those golfers — Ayanna Langdale, Jasmin Carrillo, Adrianna Rosales and Vashti Rachal — had to finish their first round starting at 7 a.m. on Monday, before starting and completing their second round of play.

The team went into the second round in fifth place, but finished as the seventh-best team in state with a two-day score of 724. Modesto won the title with a score of 625.

“I’m proud of this team. I am proud to call myself a part of the AVC women’s golf family,” said Salvador, who wasn’t on a full team for most of her high school seasons. “I’m so proud to be here and so happy to be a part of a team that’s only growing. … It’s special in my heart and I have not regretted anything. I have enjoyed every second I’ve spent with the girls. It’s tough knowing that our season’s over.”

“I hope the girls feel as accomplished as I feel for getting to state.”

Every team member expressed their appreciation for Londono and his enthusiasm and love for golf and for the success of his players.

“Special thanks to everyone — the entire AV community stepping in and helping us as a team and especially our coach,” Salvador said. “Special thanks to coach for being there and constantly having us practice, even in the offseason — that’s what really helped us out. All of the girls put in work and that’s one of the reasons we went undefeated.”