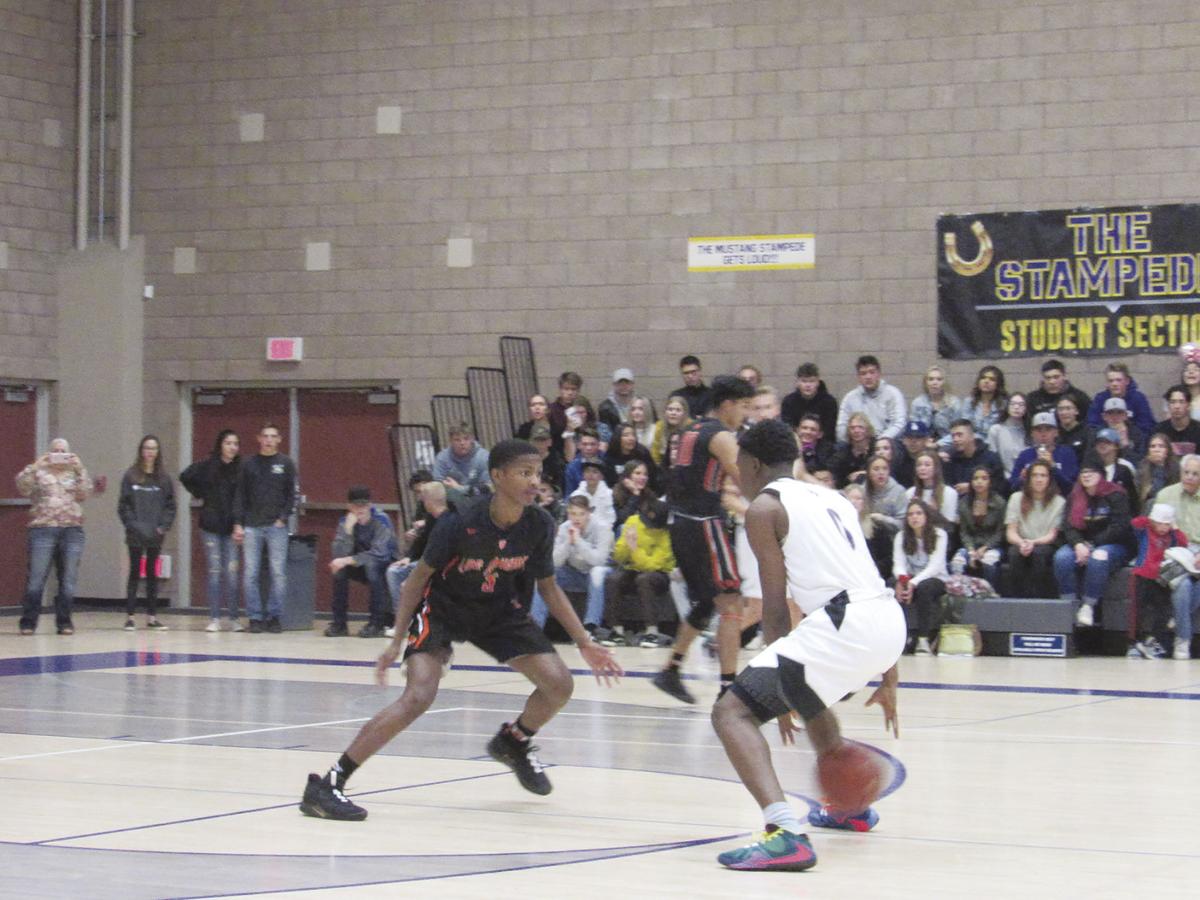 BIG GAME —Vasquez’s Omari Mathis (0) dribbles the ball against a Los Amigos player in a CIF-Southern Section Division 5A second round playff game on Friday. Mathis hit the game-winning shot in the Mustangs’ 56-54 victory. 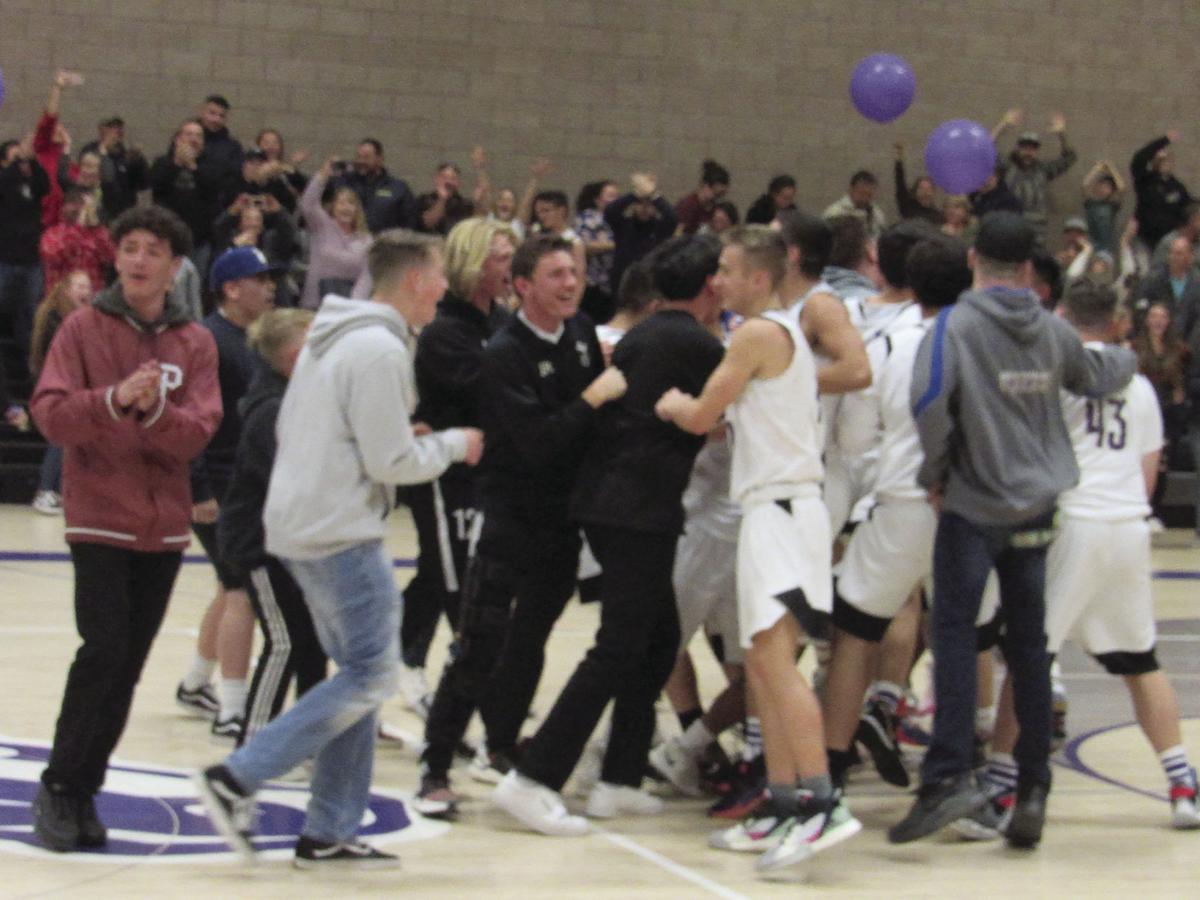 PUMPED —The Vasquez boys basketball team celebrates its playoff win over Los Amigos with fans on Friday. The Mustangs play at home Tuesday.

BIG GAME —Vasquez’s Omari Mathis (0) dribbles the ball against a Los Amigos player in a CIF-Southern Section Division 5A second round playff game on Friday. Mathis hit the game-winning shot in the Mustangs’ 56-54 victory.

PUMPED —The Vasquez boys basketball team celebrates its playoff win over Los Amigos with fans on Friday. The Mustangs play at home Tuesday.

ACTON — Sometimes Vasquez head coach Myles Conkrite stays up late at night figuring out last-second plays should his team ever need it.

The one time the Mustangs needed Conkrite’s late night play, it worked.

With 4.2 seconds remaining in the game, only 1 second remaining on the shot clock and the score tied against visiting Los Amigos, Conkrite, the mad scientist, reached into his bag of tricks.

Vasquez was taking the ball out in front of their own bench with Riley Colfer taking the ball out of bounds. The Lobos were worried about a quick 3-point shot attempt from Jacob Orrill, who already had two 3s in the quarter. Ulysses Diaz set a back screen for Omari Mathis and Colfer threw a perfect lob pass to Mathis who kissed the ball off the glass.

It proved to be the game-winner and the Mustangs propelled themselves into the Elite Eight of CIF-Southern Section Division 5A with a come-from-behind 56-54 victory over visiting Los Amigos, of Fountain Valley, Friday night at Vasquez High School.

“That was my best completion of high school,” said Colfer with a smile, who also was the starting quarterback on the football team. “I just thought about the consequences if I didn’t make the pass. When we got down we played with a sense of urgency. We knew we had to calm down. We told ourselves we’re not done yet and we didn’t want this to stop. This is it.”

The Mustangs (13-11) will face Cathedral City in the quarters on Tuesday night at Vasquez High. The Lions had no trouble disposing of University Prep, 83-63, on Friday night.

“Those are things I just work on at the house. We knew they would be concerned about Jake (Orrill) because he was on fire. Uly (Diaz) set a great screen and it freed up Omari,” Conkrite said. “Everybody did their job and it made me look even better.”

Vasquez played catch-up the entire game. The Mustangs trailed by as many as nine points, but hung around just enough to remain within striking distance.

The Lobos (19-9) opened the fourth quarter with a bucket to increase their lead to 48-40. Vasquez and Orrill responded with two 3-pointers to cut the lead to 50-46 with 5:12 remaining.

Mathis’ first bucket of the quarter came at 2:57 and he converted the old-fashioned 3-point play and the Mustangs inched closer, 52-49, with less than three minutes. Los Amigos made a concerted effort in stopping Mathis.

Though he missed a lot of chip shots, Mathis got to the rim at will and finished with a game-high 24 points, shooting 8-of-10 from the free-throw line. Orrill, with 21 points as the sharpshooter, finished with four 3-pointers.

“That was the first time we ever ran that play. We realized we didn’t want to go home. We have worked too hard all season to go home this early. Man, I’m about to cry,” an emotional Mathis said. “We really owed this game to our coaches. We didn’t have a great shooting game, but we were able to pick it up in the fourth quarter. On a scale of one to 10, I give this victory a 15.”

Mathis said his team felt disrespected by the rowdy Los Amigos fans, which made the 2½-hour trip from Fountain Valley. With 44.4 seconds left in the first half the fans began chanting “scoreboard, scoreboard.” Mathis said that only ignited his team.

“This win came from our experience as a team. We knew the game was never over,” Orrill said. “We’re not satisfied, though. We really needed this one. I’m happy for tonight, but we have to get back to work tomorrow. We have a brotherhood here. We all want this together.”

Colfer missed a 3-pointer, but the ball was rebounded by the Mustangs with 35.1 seconds remaining. Vasquez ran the shot clock all the way down without any good looks and Conkrite miraculously called a timeout with one second setting up the heroics.

After Mathis broke the tie, Los Amigos still had one final opportunity with 2.8 seconds. The Lobos, which had to take the ball underneath the Mustangs’ basket, threw the ball away as it was stolen to preserve the victory.

“This is something we’ve been talking about all year. This win was all on their defense,” Conkrite said. “I’m so happy. The guys fought hard. We’ll enjoy this one and get ready for the next one.”