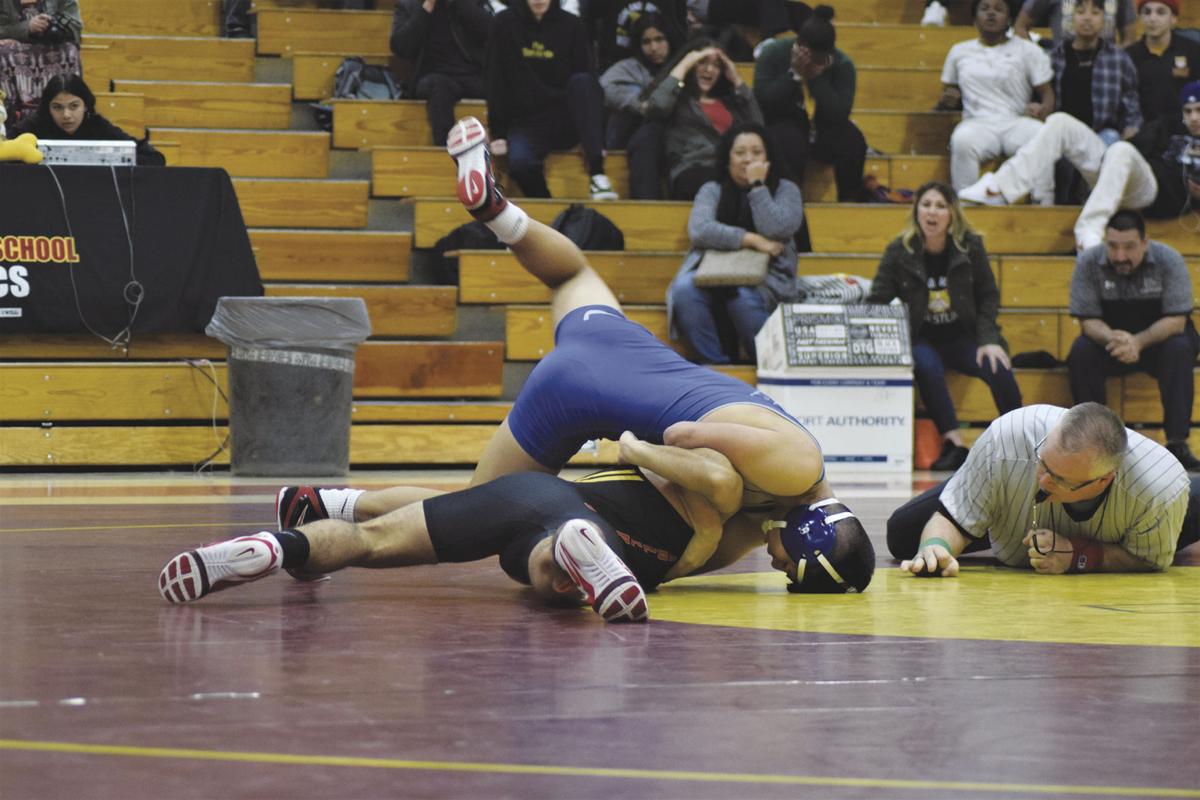 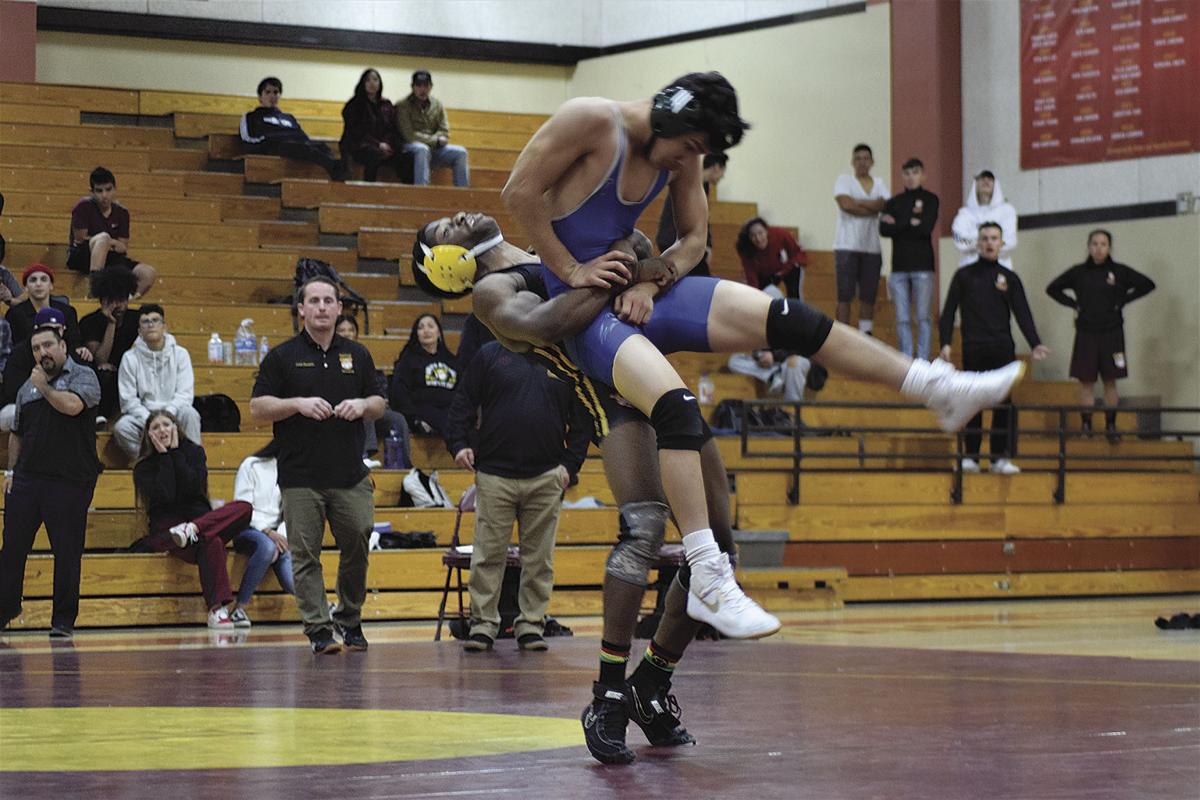 THROW DOWN —Highland wrestler Andrew Shamburger picks up Littlerock’s Arnold Topete during the match at 145 pounds at Highland on Wednesday. Shamburger won the match 9-7 in overtime. Littlerock won the overall team match to stay undefeated in the Golden League.

THROW DOWN —Highland wrestler Andrew Shamburger picks up Littlerock’s Arnold Topete during the match at 145 pounds at Highland on Wednesday. Shamburger won the match 9-7 in overtime. Littlerock won the overall team match to stay undefeated in the Golden League.

PALMDALE — It was a bittersweet victory for Littlerock coach Mike DeVestern on Wednesday at Highland High School.

The Lobos defeated the Bulldogs 41-32 to remain undefeated and tied for first place with Quartz Hill in the Golden League, handing Highland its first loss.

The victory also came against his son, Highland first-year head coach Tim DeVestern, a long-time assistant coach under his father at Littlerock.

“It’s bittersweet. I wanted my son to win. It’s the weirdest feeling,” Mike DeVestern said. “I wanted us both to win, but that can’t happen.”

Both teams entered the match with 4-0 records, as did Quartz Hill, which faced Knight on Wednesday.

“All day today, it was like a blur,” Tim DeVestern said. “I enjoyed that moment though. I really did. The whole time, even the points we were losing, I still enjoyed it, because not a lot of people actually get to experience this type of opportunity. I enjoyed every minute we had together. I know it’s not going to last forever, but I hope to see it again next year and hopefully next year’s numbers are the opposite and we pull out the win.

“It was a bittersweet moment.”

Littlerock trailed 24-6 through six matches, when the Lobos began to rally.

Littlerock junior Stan Arevalo scored a 15-0 victory at 170 pounds, jumping into the arms of his former coach, Tim DeVestern, to celebrate before going to his current coaches.

It was the first of two straight wins for the Lobos, who won six of the next seven matches.

Highland sophomore Isaiah Vasquez scored an 8-4 win at 195 pounds, giving the Bulldogs a 26-17 lead, but the Lobos answered by winning the next four matches.

“It felt really good,” Flores said. “Yesterday I came into practice with a hurt shoulder and I was really doubting myself, because I thought I was going to mess it up even more. I canceled that out and I just kept wrestling. What I like to do is wait in the first round and see how he wrestles and once I figure that out, I just attack.

“It feels amazing. Last year we lost by one point and I was really looking at that the whole week. I just wanted to take them down this time. We’re going to stay solid, go to practice every single day and get better.”

Flores said he also wanted to hug Tim DeVestern after his victory.

“I wanted to give him a big hug after I won, because he’s like family to me,” said Flores. “He coached me for football and wrestling too. He’s a really good friend.”

Tim DeVestern said he felt conflicted, having coached many of the Littlerock wrestlers last year.

“I don’t like to see my Highland guys lose, but I do enjoy seeing those guys win because I know how much hard work they put in,” Tim DeVestern said. “They do deserve to win. I care a lot about those guys too. Give it two years and it will be a different beast. I have a lot of respect for Littlerock.”

Highland did not field a wrestler at 106 pounds, giving a forfeit win to Littlerock freshman Jeshua Orihuela.

Littlerock freshman Omar Perez sealed the victory for the Lobos with a second-period pin at 113 pounds, giving Littlerock a 41-26 lead with one match remaining.

“It felt great. I did it for the team,” Perez said. “I pulled it off. It was amazing overall. I just hope to get better and improve, keep on improving.

“To keep on pushing and not give up on that, because I have faith that we were going to pull through as a team and I was able to carry us to the win. Overall I owe it to my teammates and everyone hyping me up. Without them I wouldn’t have been able to do any of this. I know it sounds sappy, but it’s true. I’m glad I pulled through for my team. I humbly accept the win. Amazing match for me and my teammates. For those that didn’t do so well, they’ll improve with me. Everyone will keep on improving.”

Highland junior Gennaro Davis finished with a first-period pin at 120 pounds in the final match of the meet.

“I was pretty worried in the beginning. Two of my guys got pinned that I didn’t expect to get pinned,” Mike DeVestern said. “We jockeyed around weight classes. We were down 24-6, pretty bad. A couple of my guys stepped up. Got a pin from my 113-pounder. I just felt bad also. If Tim would have had his 106 make weight, that would have been six points their way. We would have won only by three instead of by nine. If they would have had their 113-pounder in, he’s a stud. He has a hurt ankle. They wrestled with a beat up team. I guess tonight was our night. We got lucky I guess.”

Littlerock senior captain Dustin Vasquez had a first-period pin at 132 pounds, in the second match of the meet.

“My kids are believing. They’re realizing,” Mike DeVestern said. “One of the key things, me and Trever wrestle every day with our team live. Every day. I don’t think many other coaches wrestle every day with their team. Tim can’t because he’s got too many kids. He’s coaching all the time. Where I only have 20 kids on my team, so I’m able to wrestle and coach at the same time.”

DeVestern has a broken right hand and ripped a tendon in his shoulder. He started coaching at Littlerock as an assistant coach in 2002, when the Lobos won a CIF championship.

“I don’t know how many years I’ll be wrestling live. I just turned 50,” Mike DeVestern said. “It hurts getting out of bed sometimes.”

Highland junior Ahre Ramos started the meet with a third-period pin at 126 pounds.

Highland senior Rainer Santos followed with a 3-1 win over Littlerock freshman Luis Sandoval at 152 pounds and Highland junior Kevin Robledo had a third-period pin at 160 pounds to give the Bulldogs a 24-6 lead.

“I’m just speechless,” Tim DeVestern said. “I’m at a loss for words pretty much, because I really didn’t this was the way it was going to turn out. Littlerock wrestled well. They wrestled really good actually.

Highland will face Knight on Wednesday.