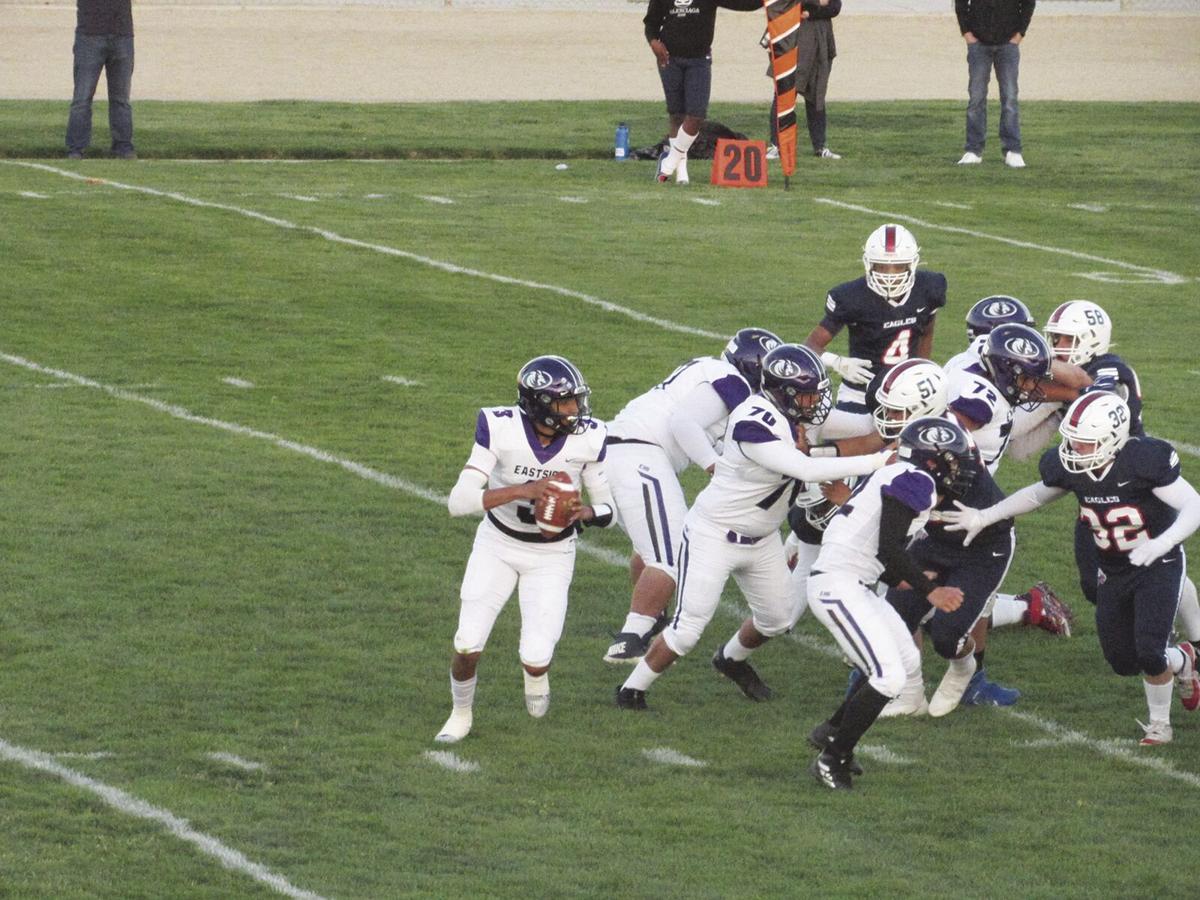 ROLL OUT — Eastside junior quarterback Cameron Bailey (3) rolls out to pass during the Lions’ 40-16 victory over Lancaster on Friday night at Lancaster High School. 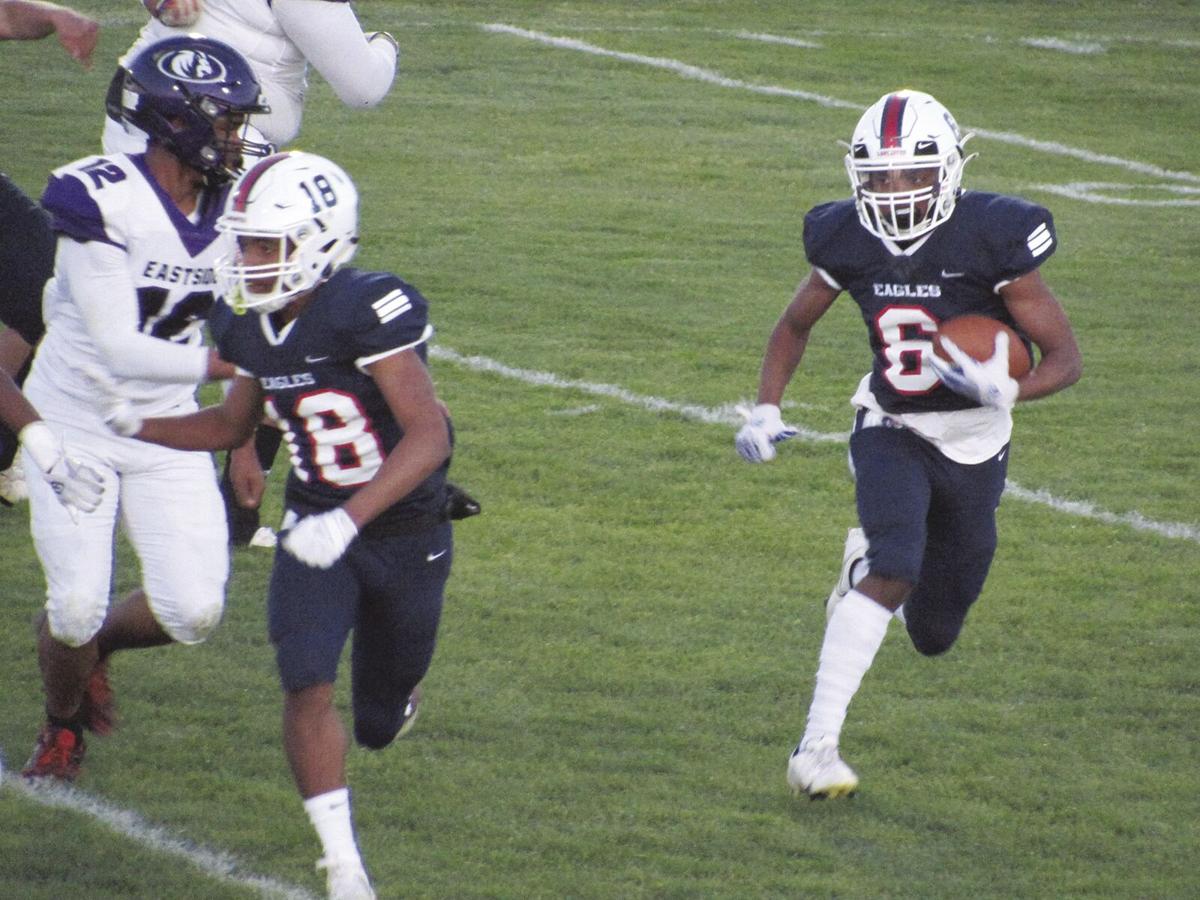 TURN THE CORNER — Lancaster junior Jeremiah Childress (6) runs with the ball against Eastside during a Golden League game at Lancaster High on Friday night. Eastside won the game 40-16.

ROLL OUT — Eastside junior quarterback Cameron Bailey (3) rolls out to pass during the Lions’ 40-16 victory over Lancaster on Friday night at Lancaster High School.

TURN THE CORNER — Lancaster junior Jeremiah Childress (6) runs with the ball against Eastside during a Golden League game at Lancaster High on Friday night. Eastside won the game 40-16.

That was a direct quote from Eastside head coach John Quam with a smile.

“I’m just really happy for the kids,” the Lions head coach said. “This is the first time we’ve been on the winning side in a while.”

With the help from Semaj Howard who rushed for three touchdowns and a stingy defense that has allowed only 167 yards over its past two games, Eastside extended its winning streak to two games for the first time since 2016 with a 40-16 victory over Lancaster, Friday night at Lancaster High School.

“Making the switch on offense (from week one) to a double wing-T has really helped us. The kids really like it,” Quam said. “Tonight we made some adjustments at halftime and it opened up for us.”

In a big way and Howard was a huge part of that adjustment.

The senior running back rushed for 143 of his 158 total yards in the second half and scored two touchdowns to help ice the game for the Lions (2-1, 2-1).

Following a turnover by the Eagles in the first quarter leaving the ball on the Lancaster 3-yard line, Eastside struck first as Howard bulled his way into the end zone from three yards out to help the Lions build an 8-0 lead following the two-point conversion.

Later in the first quarter a fake punt by Eastside, in which Howard overthrew an uncovered receiver when the Lions were seemingly going to punt the football, failed and Lancaster (0-3, 0-3) took over on the 8-yard line.

On the ensuing play Eagles’ quarterback Derrick Sterling scampered his way into the end zone from eight yards out to tie the score, 8-8. Sterling accounted for most of Lancaster’s offense as he passed for 70 yards and rushed for 60 yards and had two scores.

“It was a tough game for us, but the kids fought hard. I think we just ran out of gas at the end. We’ve done this the whole season. We start strong and we’re hanging tough, but we just run out of gas,” first-year Lancaster head coach Anthony Coleman said. “The guys are competing though. Right now we’re laying the foundation. They just have to trust the process. We will get there. I’m proud of their effort; they never gave up.”

The Lions took a 16-8 lead in the second quarter after quarterback Cameron Bailey kept the ball and sprinted up his own sideline, getting extra motivation from his teammates while doing his best Noah Lyles impersonation, scoring from 68 yards out to give Eastside the momentum.

Howard came out like a man possessed in the second half after the Lions led 16-8. He had three consecutive runs of 27, 38 and 54 yards, the latter two ending in touchdowns as he juked and jived through the Lancaster defense like a hot knife through butter. The 38 yard touchdown run extended the lead to 24-8. The 54-yard run on his next touch gave the Lions a 32-8 lead.

“I have to give it up to my line and thank them and the receivers for blocking for me. It was a good game for us. We just had to stay focused,” Howard said. “We played great. We had a couple of mistakes, but I’m proud of the team. We just have to keep working hard. Tonight was a team effort.”

Lancaster trailed 32-8 and cut into the lead following a methodical drive which was capped by another touchdown run by Sterling, this time from nine yards out. That trimmed the lead to 32-16.

On the ensuing kickoff the Eagles recovered a fumble by the Lions on the Eastside 25-yard line. In a game that was marred by penalties, a 15-yarder halted Lancaster’s drive and spoiled a golden opportunity for the Eagles to inch even closer.

“We need to work better as a team. In my opinion, they (Eastside) aren’t a better team than we are. We just weren’t focused,” Sterling said. “It’s all mental for us. We just need to work harder in practice.”

Howard iced the game in the fourth quarter with an interception of Sterling to seal the victory.