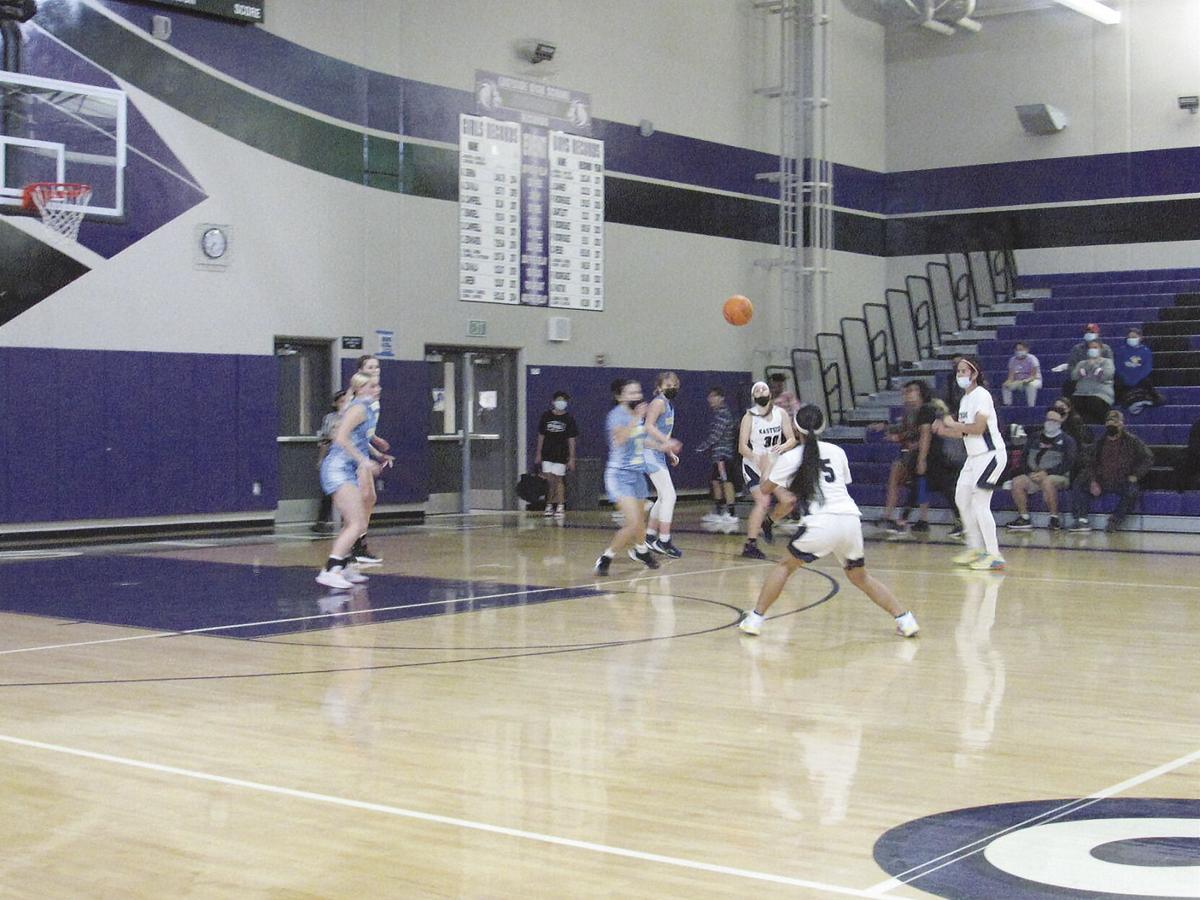 Eastside’s Mona Fajardo (5) and Maddie Ortiz (30) pass the ball between each other as some Quartz Hill defenders look on during Tuesday’s Golden League game at Eastside High. The Lions won 44-42 on a buzzer beater. 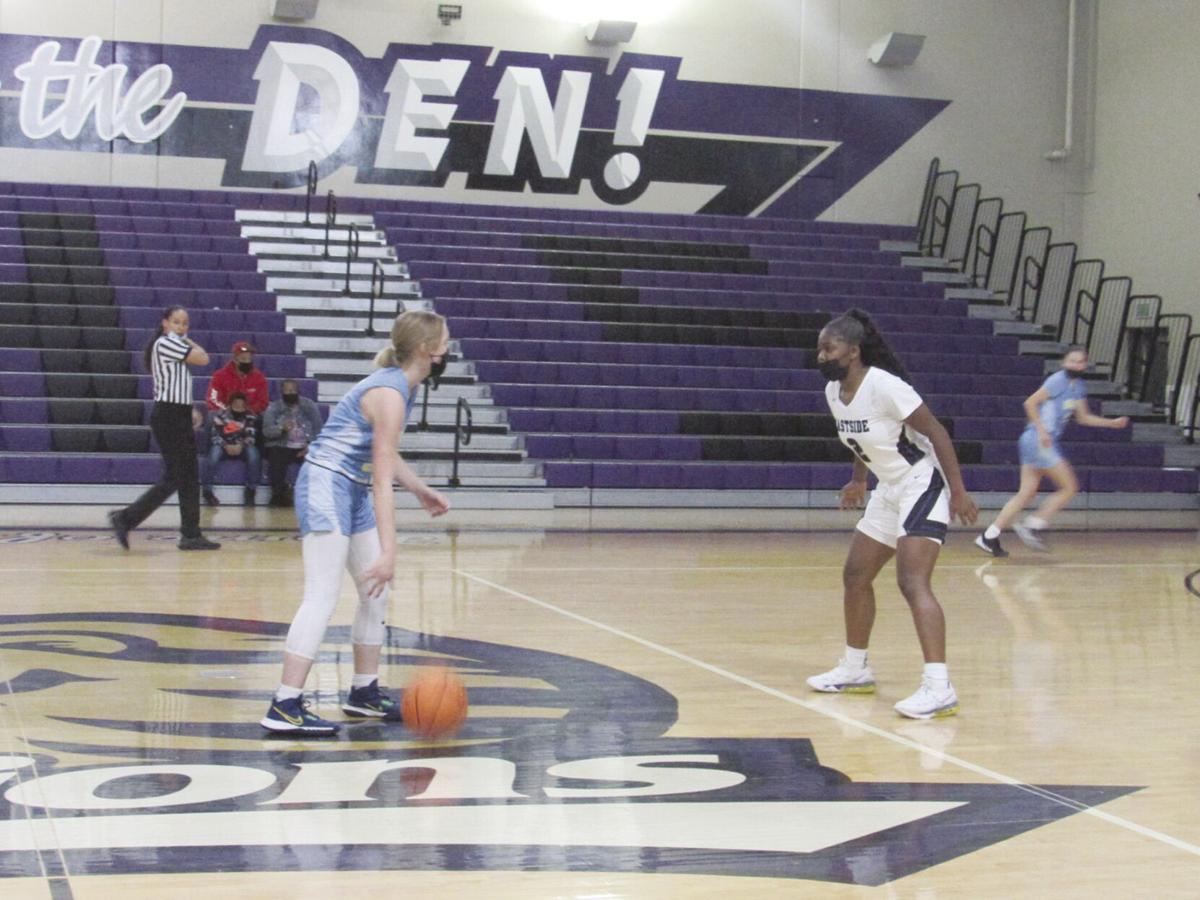 Eastside’s Mona Fajardo (5) and Maddie Ortiz (30) pass the ball between each other as some Quartz Hill defenders look on during Tuesday’s Golden League game at Eastside High. The Lions won 44-42 on a buzzer beater.

But when Medrano let it fly with 1.7 seconds remaining in the fourth quarter from 15 feet, her prognostication was true.

“I felt it off my fingertips. I knew that it was going in,” Medrano said with a smile.

And when the clock hit zero, fans stormed the court and Medrano was the hero as she just put her team ahead and the Lions escaped with a thrilling 44-42 victory over Quartz Hill, Tuesday evening at Eastside High School.

“I was kind of struggling throughout the game, but when I shot it, I wasn’t nervous,” said Medrano, who led her team with 12 points. “This feels good. It was a good team win for us. This was a big win because we know they are a good team. I think this will give us momentum moving forward.”

Another prophecy from Medrano?

Medrano’s heroics almost didn’t come to fruition as the Royals (4-5, 1-2) battled back from a double-digit deficit and had the ball with the score tied 42-42 with a chance to take the lead.

The Lions (4-1, 2-1) entered the fourth quarter with a 37-30 lead, following a forgettable third quarter by Quartz Hill. The Royals began to chip away following a rebound-putback by Skylen Bell, who was fouled after making the shot. Bell didn’t convert the 3-point opportunity, but she helped trim the lead to 41-36 with 3:30 remaining.

Following a turnover by Eastside, Quartz Hill inched closer following a bucket by Grace Faulk, who was the Royals’ biggest offensive threat as she finished with 18 points. Faulk’s bucket cut the lead to 41-38 with 3:08 left.

“It sucks we lost, but I thought we played hard. I liked how we came back (in the fourth quarter),” Faulk said. “It is, what it is. We’ll get them next time. We played really well and I’m pleased with our effort.”

A pull-up jumper from Mandy Frozina followed by a fast-break layup by Savannah Arellano gave the Royals a 42-41 lead with 1:33 remaining.

Keyilla Barnes made 1-of-2 free throws with Eastside trailing to even the game 42-42 with 63 seconds remaining. After Eastside missed a 3-pointer, Quartz Hill secured the rebound and called a timeout. The Royals got the look they wanted, unfortunately Bell missed the shot and the Lions grabbed the rebound and called a timeout of their own with 22.2 seconds remaining.

Maddie Ortiz (seven points) missed a 3-pointer, but the Lions pulled down the offensive rebound and, a couple of passes later, the ball found  the hands of Medrano, who calmly sank the game-winning jumper.

“What I said to the girls before the game is to play hard and to never give up on each other. You have to learn how to win together as a team,” Lions head coach Gerard Nelson said. “When we ran our cuts it worked, but we have to stay consistent. Right now, the girls are learning how to win. I can’t be more proud of the girls. This night they are winners. We have to take this win and build on it.”

The third quarter was one to forget for the Royals. Quartz Hill led 26-24 at halftime, but the Lions opened the first six minutes of the half with a 12-0 run to take a 36-26 lead. The Royals were plagued with turnovers on their opening possessions as they turned it over four times, helping the Lions to stretch their lead. That run included two fast-break layups by Barnes, another two buckets by Ortiz and another from Medrano.

Frozina stopped the bleeding for Quartz Hill with a layup. Still, Eastside led by seven entering the fourth quarter.

“The third quarter we just came out flat and that one quarter was all it took. We never should have let them build that lead,” Royals head coach Dean Miller said. “That was the difference in the game. It was all our execution in the third quarter. But the girls battled and I’m proud of them. They didn’t hang their heads. We’re starting to gel more as a team and that will help us down the stretch.”

The Lions led early in the game, building a 14-4 lead in the first quarter. Quartz Hill, however, used a 9-0 run to close the quarter and trailed by one, 14-13, after one.

A 3-pointer by Payton Wright gave the Royals their largest lead of the first half, 26-22, with 14 seconds remaining. Eastside’s Breanne Lovely cut the lead in half with a bucket just before halftime.