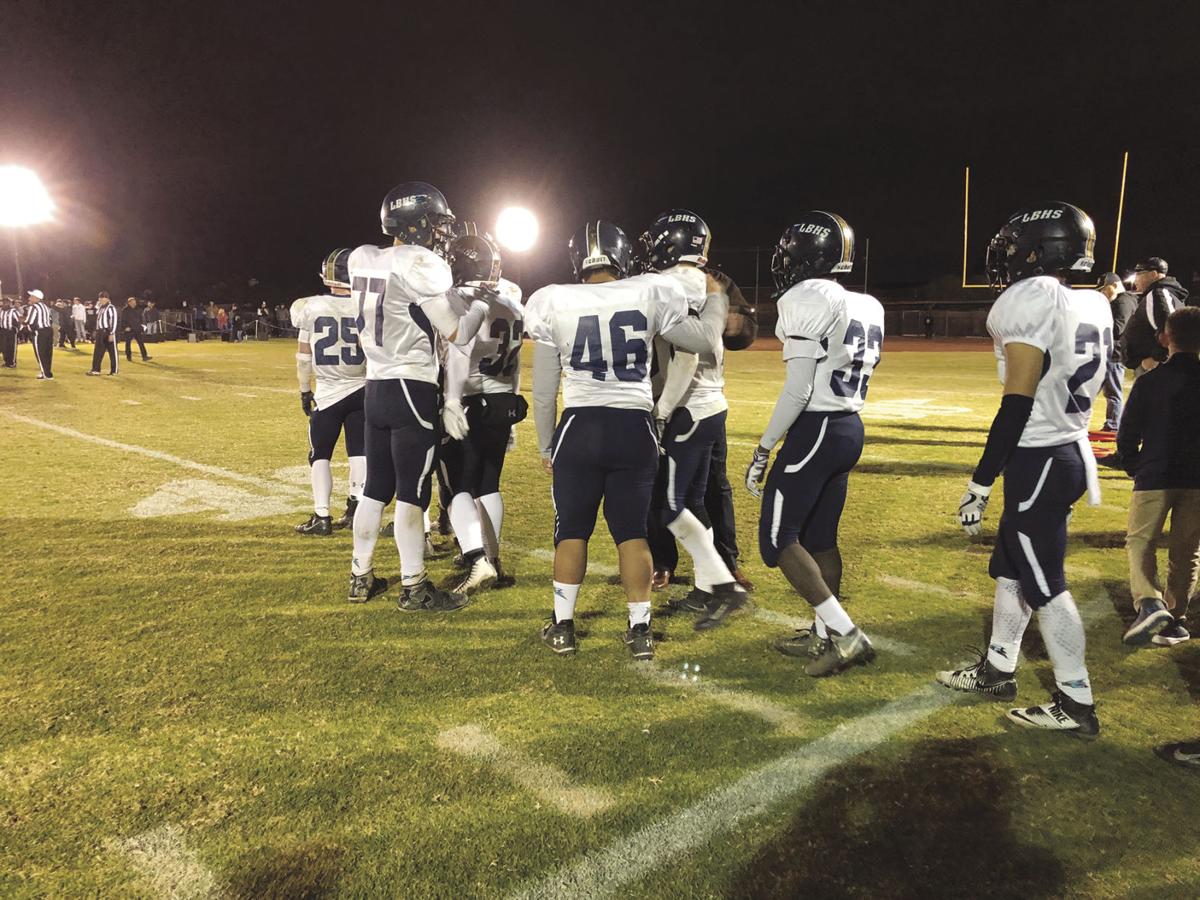 IT’S OK — Lancaster Baptist football players comfort each other after losing to Bloomington Christian 36-28 in the CIF-Southern Section 8-man Division 2 championship game on Friday. The game came down to the wire as Bloomington scored on a last-minute touchdown to break a 28-all tie. 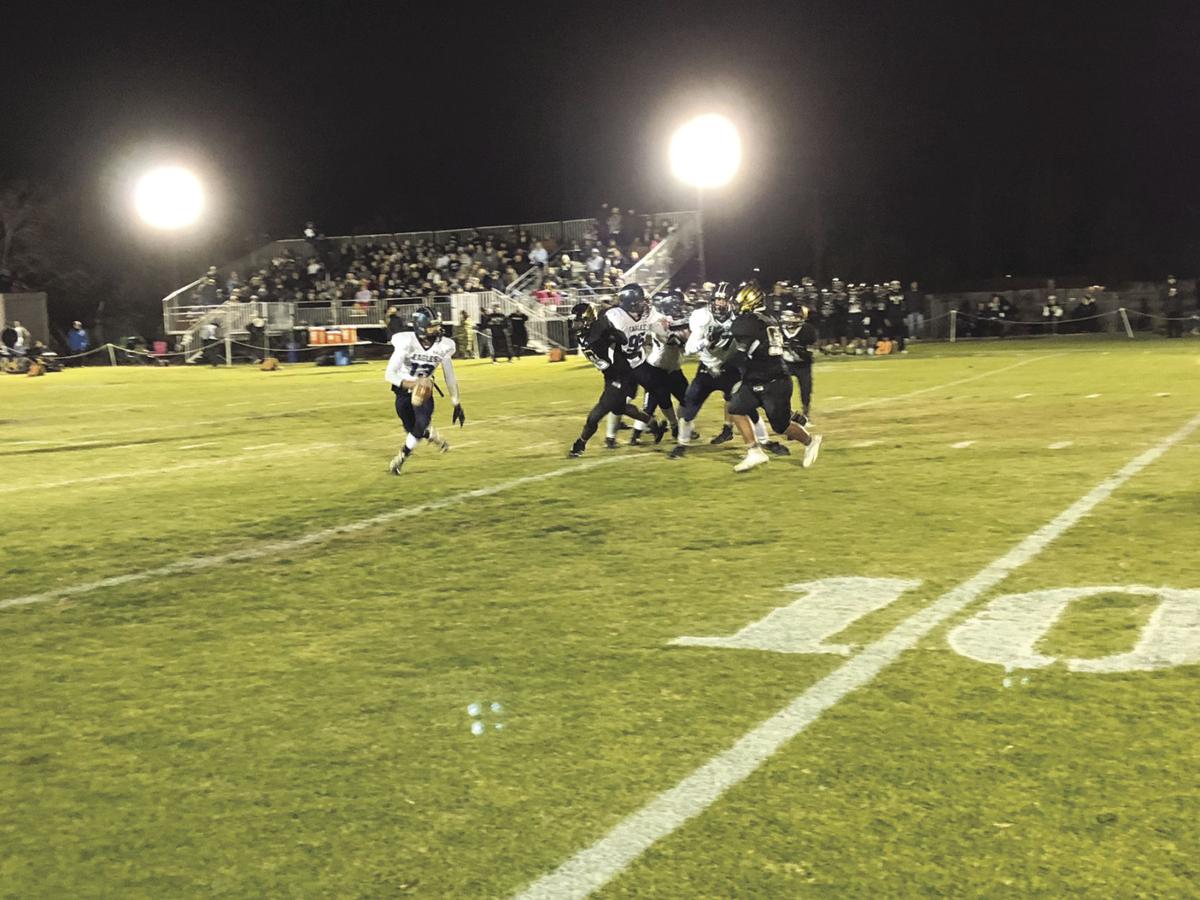 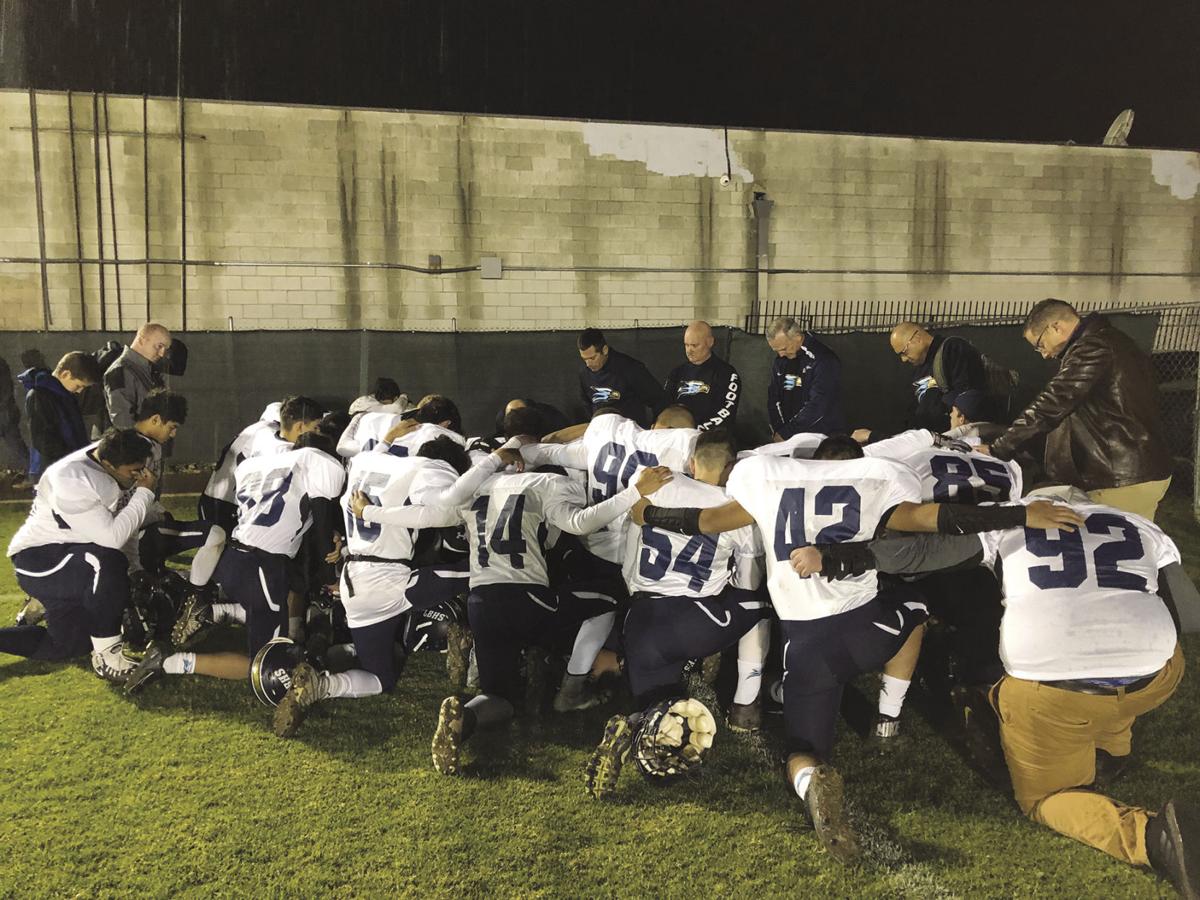 IT’S OK — Lancaster Baptist football players comfort each other after losing to Bloomington Christian 36-28 in the CIF-Southern Section 8-man Division 2 championship game on Friday. The game came down to the wire as Bloomington scored on a last-minute touchdown to break a 28-all tie.

BLOOMINGTON — The emotions of the Lancaster Baptist players and coaches were hidden after their game Friday night by the rain that began when the team went into its postgame huddle.

The Eagles watched Bloomington Christian break a tie with the go-ahead touchdown with one minute and one second remaining in the CIF-Southern Section 8-man Division 2 Championship game.

“It stings, certainly,” Lancaster Baptist coach John Alvarez said. “These boys worked real, real hard to get where we’re at. It’s not an easy thing to get here. It’s a hard thing to take in when you lose, the immediacy of it. You worked all these many months and it’s over.”

Lancaster Baptist tied the game at 28-28 with eight seconds remaining in the third quarter on an 11-yard touchdown pass from senior Lucas de Paula Rosa to senior Danny Lienert, capping a seven-play, 65-yard drive. The drive was extended on a face mask penalty on a run by Lienert.

The momentum shifted in the Eagles’ favor as Lienert recovered a Bloomington Christian fumble in Eagles’ territory.

But the Eagles were unable to capitalize on the turnover and were forced to punt.

Both defenses stood tall on the next two possessions, until the Ravens got the ball at their own 26-yard line with 2:40 remaining.

Bloomington Christian was helped by a pass interference penalty on the first play.

“We knew it would be a tough game,” Bloomington Christian coach Steven Stott said.

Stott said he was proud of how his team rebounded after the turnover on the fumble late in the game.

Turner completed 16-of-21 passes the final 3½ quarters for 240 yards and four touchdowns.

“They were eight points better than we were tonight.”

Lancaster Baptist got the ball at their own 20-yard line with 53 seconds remaining.

The final drive began promisingly, as de Paula Rosa had a 13-yard carry.

That would be as far as the Eagles would get.

“It’s a tough one,” said Lancaster Baptist senior Jacob Wheatley, a four-year player. “Somebody’s got to come out on top and we just didn’t. I give God all the glory coming all the way here. Just being here is an honor. I love each one of these coaches. These teammates of mine, they’ve grown to be my brothers and I’ll never forget that and I’ll carry it on through my life.”

Lancaster Baptist recovered from a tough start, as the Eagles fumbled on the opening possession, but Bloomington Christian was unable to capitalize.

The Eagles scored on their second possession on a 70-yard run by senior Andrew Sandoval, who also caught a 51-yard touchdown pass from de Paula Rosa early in the third quarter that tied the game at 22-22.

“I felt like I gave it my all. I felt like we all did,” Sandoval said. “Just minor errors cost us the game. We had the shots to tie the game, we just couldn’t pull through.”

Sandoval rushed for at least 127 yards on approximately 12 carries, but only two in the second half.

After Lancaster Baptist took the early lead, Bloomington Christian answered with two touchdowns in the first quarter to take at 14-6 lead.

Bloomington Christian scored on a 53-yard pass play in the final minutes of the first half to take a 22-14 lead at the half.

Lancaster Baptist senior Lincoln Cox had a sack on a PAT attempt by Bloomington Christian in the third quarter, as the Ravens took a 28-22 lead.

“We’ve got a great group of boys that fought and fought and fought,” Alvarez said. “We just had some breakdowns that cost us some points. That really to me was the difference in the game. It was a back and forth struggle. It was a great game. We battled all night long and they got what they needed. We missed a couple opportunities with some passes there at the very end with guys wide open and didn’t connect with it.”