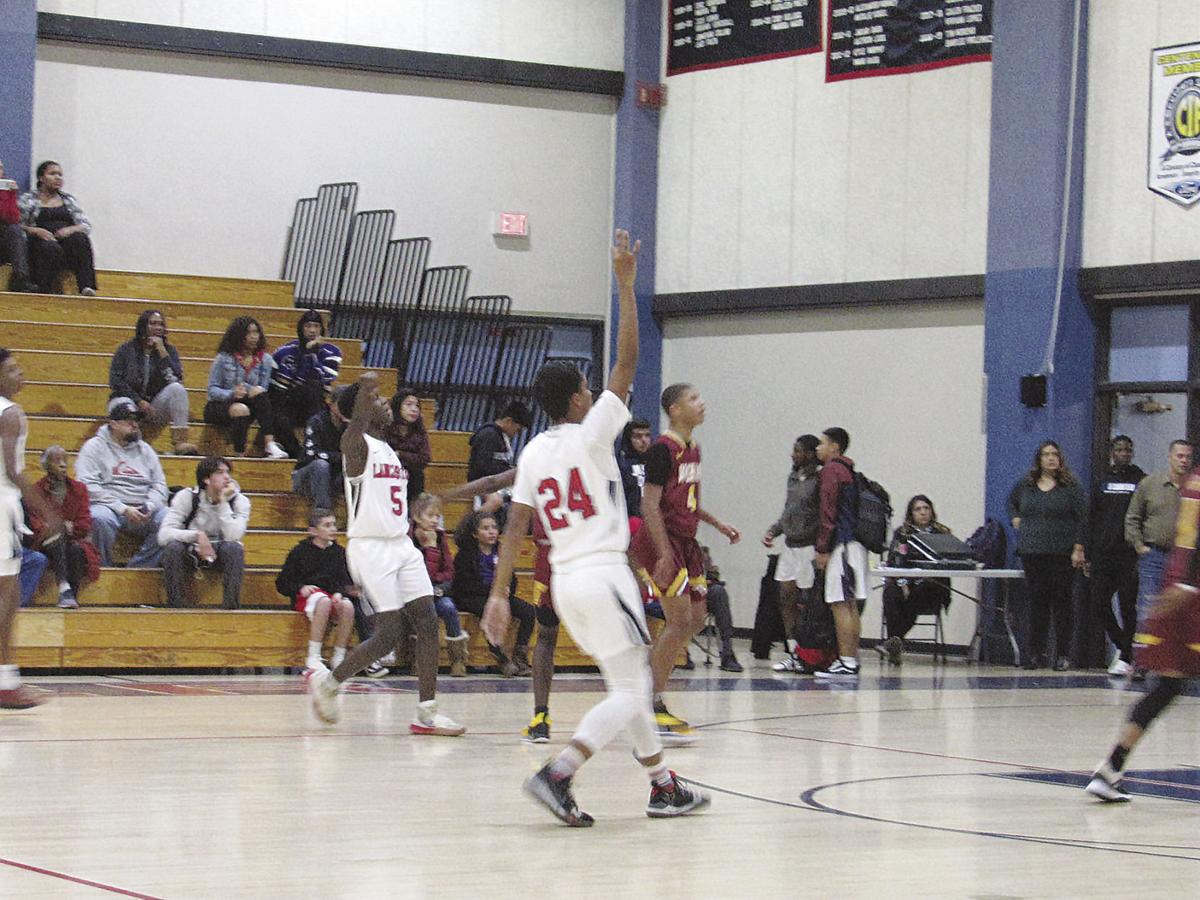 THREES UP — Lancaster’s Avion Robinson (5) and Will Smith (24) signal a 3-pointer for their team in a Golden League game against Highland on Tuesday. The Eagles won 70-65. 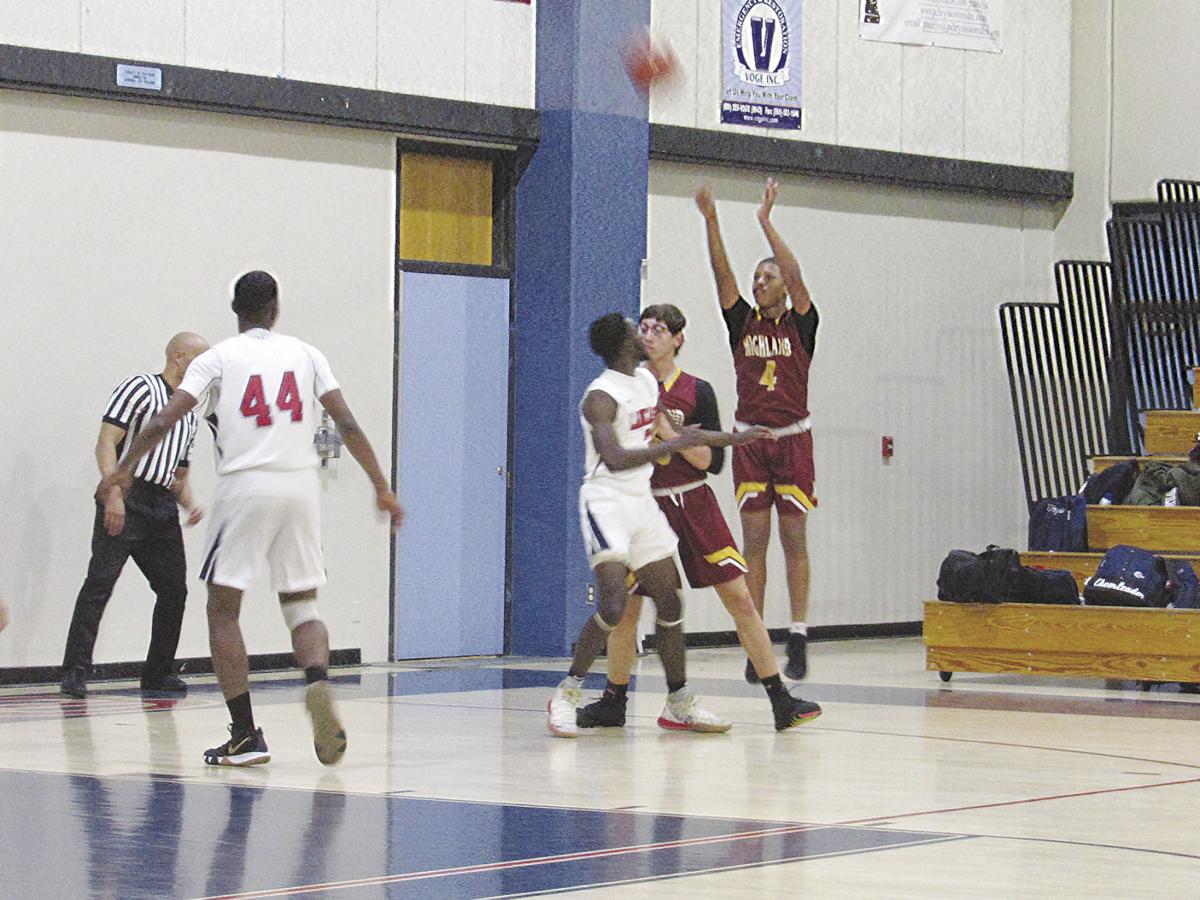 SHOOT IT — Highland’s Kai Johnson (4) shoots a 3-pointer in a Golden League game against Lancaster on Tuesday. The Eagles defeated the Bulldogs 70-65.

THREES UP — Lancaster’s Avion Robinson (5) and Will Smith (24) signal a 3-pointer for their team in a Golden League game against Highland on Tuesday. The Eagles won 70-65.

SHOOT IT — Highland’s Kai Johnson (4) shoots a 3-pointer in a Golden League game against Lancaster on Tuesday. The Eagles defeated the Bulldogs 70-65.

LANCASTER — Staff, faculty and students didn’t roll out the red carpet for D.J. Hein who returned to the sidelines at Lancaster on Tuesday night.

In fact, there was no party planned nor was there any cake or ice cream or gifts exchanged.

No, not this time.

The Eagles wanted this one and they wanted it bad.

The Bulldogs squandered a 22-point lead in the first half and Lancaster fed off the home crowd’s energy to crawl back and earn a 70-65 victory at Lancaster High School.

“We didn’t give up. We were hungry. Coach (Sidney Melvin) told us to fight back and not give up. I think we were way hungrier than they were. We stayed poised and we were locked in,” Lancaster’s Jordan Roach said. “This is a very big win for us. People have been doubting us and said we can’t win. We stayed humble. But we know there is plenty more ball left.”

The victory puts the Eagles alone atop the Golden League standings with a 3-0 record. Eastside (2-0) plays Quartz Hill on Wednesday with the Lions trying to even the Eagles’ record. Lancaster matched its win total from last season and, barring the Eagles losing 11 consecutive league games, they will easily surpass that win total from a year ago.

Semaj’ Ridley hit a 3-pointer in the corner to put the Bulldogs (6-3, 2-1) up 22-10 to open the second quarter. The Eagles missed a dunk then missed an easy layup and Ridley finished on the other end to help Highland extend its lead to 28-15.

The onslaught continued later in the quarter as Jayden Phillips netted a 3-pointer followed by back-to-back 3s by Marcus Hill and the Bulldogs seemingly had a comfortable lead, 37-15 midway through the second quarter. That was part of a 13-0 run by Highland.

“The bottom line is I didn’t prepare them well enough to win this game. I didn’t have them ready to finish. In the first 12 or 13 minutes we executed very well, but we let them snatch the momentum in the second quarter and it carried over to the second half,” said Hein, in his first year as Highland head coach. “There aren’t going to be many easy games in league which makes it exciting. Give Lancaster credit. They found a way to come back.”

The resilience of Lancaster (5-1) showed as it chipped away at the lead including closing the second quarter on a 13-2 run which carved into the lead as it only trailed 39-28 at halftime.

Highland still had a 53-44 lead heading into the fourth quarter, but the momentum was all on the Eagles’ side. The Bulldogs connected on 14 3-pointers but fell too much in love with the three in the second half.

Kerondo Dolberry connected on his second old fashioned 3-point play of the game and the Bulldogs lead was only 58-53 with 3:34 remaining. A steal and breakaway dunk over the Bulldogs Tajon DeSilva-Keltee by Roach lifted the crowd to its feet but more importantly tied the game 58-58 with 2:45 left.

“We told the guys that this is their first home game and just to play Lancaster basketball. They continued to fight and scrap. Highland gave us all we can handle tonight,” Lancaster head coach Sidney Melvin said. “We fed off the crowd’s energy. It was a crazy game. It’s good to know we can come from behind. That gives us confidence for future games. Tonight was a tough test, but we passed. I thought we picked up our defensive intensity in the second half.”

A put back by Malcolm Hodges, who led his team with 18 points and continued his dominance rebounding the ball, following a missed free throw by Roach put the Eagles up 62-58. The Bulldogs responded with four consecutive points to tie the score 62-62 with 90 seconds remaining.

Another rebound and put back by Hodges gave the Eagles a 65-62 lead. Late free throw shooting by Roach and Dylan Bryant sealed the victory for Lancaster.

“We came out with good energy, but the last three minutes of the second quarter we started slacking. The game plan was to drive and get to the line and we didn’t execute that,” said Highland’s Marcus Hill who led the game with 25 points, including five 3-pointers. “We got complacent and we thought we were in the driver’s seat. We look forward to the next time we play them. Their rebounding hurt us.”

Roach finished with 17 points and Dolberry added 16. In all the Eagles had four players in double figures. Dar Hannah chipped in with 13 points for the Bulldogs.