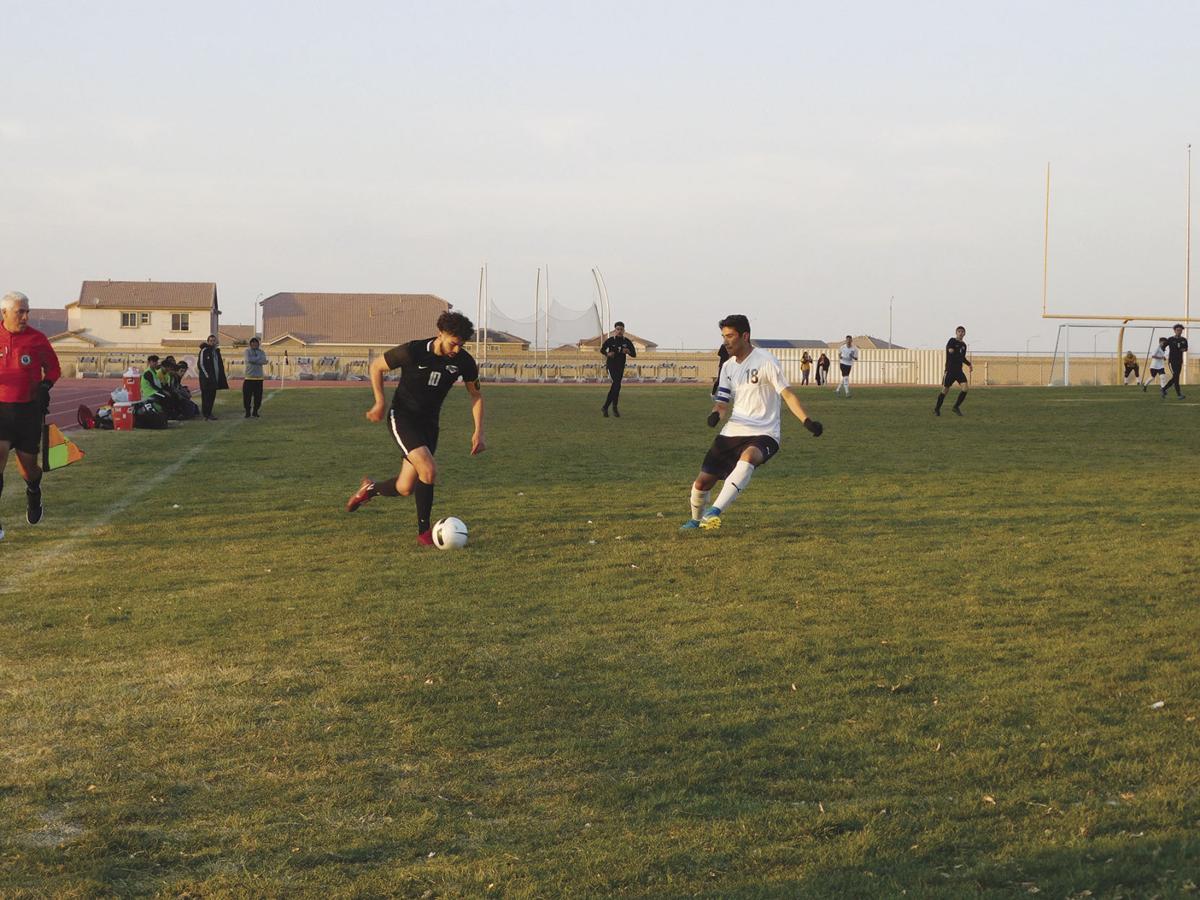 DOMINATING —Knight’s Kenny Oropeza, left, takes the ball toward the goal in a CIF-Southern Section Division 4 second-round playoff game against Garey on Friday. Oropeza scored both of the Hawks’ goals in a 2-0 victory. 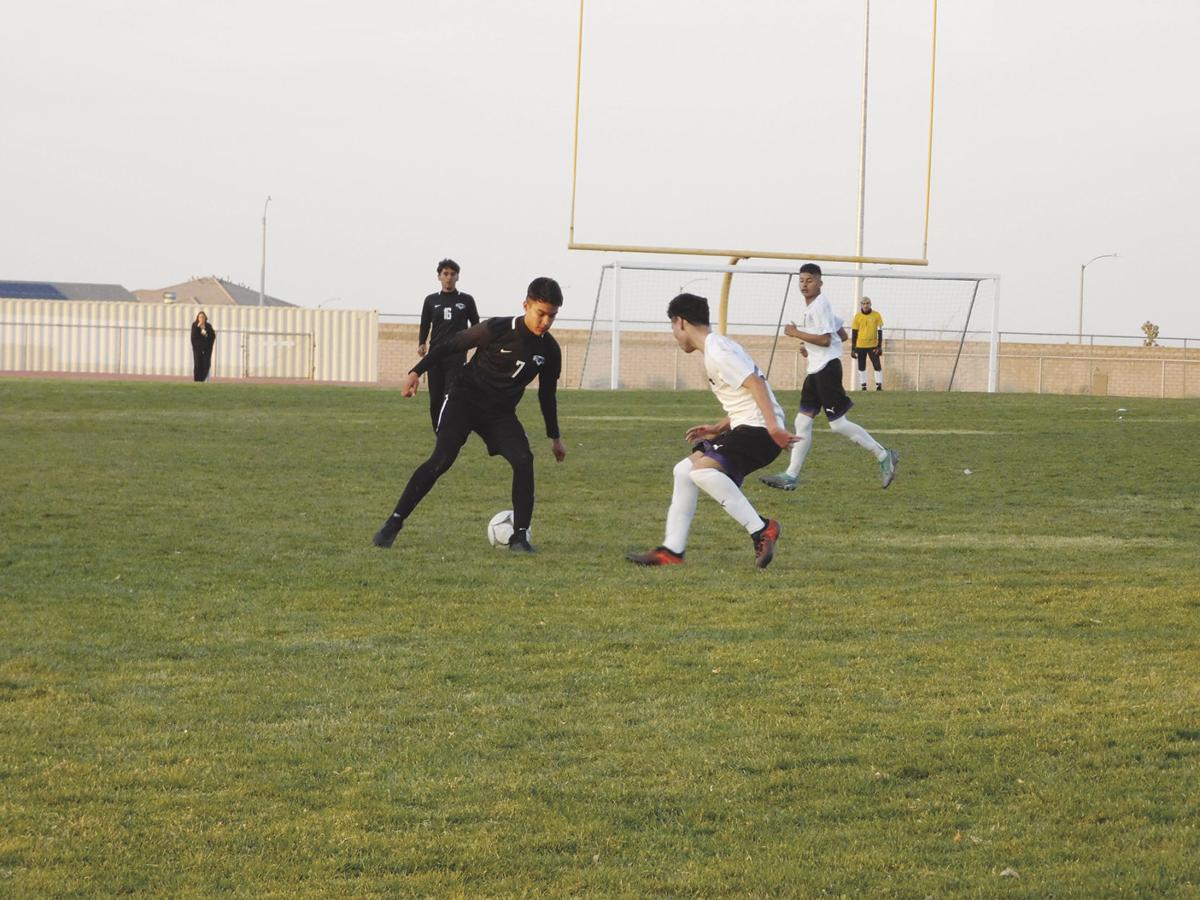 KEEP AWAY —Knight’s Jesse Aguayo, left, uses some fancy footwork to keep the ball away from a Garey defender during Friday’s second-round playoff game. The Hawks won 2-0.

DOMINATING —Knight’s Kenny Oropeza, left, takes the ball toward the goal in a CIF-Southern Section Division 4 second-round playoff game against Garey on Friday. Oropeza scored both of the Hawks’ goals in a 2-0 victory.

KEEP AWAY —Knight’s Jesse Aguayo, left, uses some fancy footwork to keep the ball away from a Garey defender during Friday’s second-round playoff game. The Hawks won 2-0.

PALMDALE — The Knight boys soccer team came out with intensity in its CIF-Southern Section Division 4 second-round game against Garey on Friday afternoon and kept the intensity high throughout 80 minutes.

The Hawks’ push and fight led them to a 2-0 victory and a spot in the quarterfinals.

“It feels amazing, because ever since freshman year I’ve always dreamt of making it the CIF finals and taking it and every year we never make it past the first round,” Knight senior Jesse Aguayo said. “To be in the quarterfinals now, it feels surreal.”

Senior forward Kenny Oropeza scored both goals for the Hawks — one in each half.

His first goal came in the 10th minute as Aguayo kicked a high cross from the right side of the goal and Oropeza jumped up and flicked the ball into the net with his head.

“Our coach told us to play high pressure in the beginning to capitalize and finish off the game right away and that’s exactly what we did,” Aguayo said. “We took advantage of our crosses and we ended up finishing.”

Oropeza was happy with the first goal, which was impressive, but knew the team couldn’t stop there.

The Hawks (13-5-7) had a few more opportunities in the first half, but couldn’t get any across.

Knight coach Baltazar Mendez said the team slipped away from the game plan a little after taking the lead, but they were back on in the second half.

The Hawks pushed hard from the start of the second half, but it was a mistake by the Vikings (9-12-3) that allowed Knight to score again.

The Garey goalkeeper kicked off the ball, but didn’t get it far enough from the goal as it stayed on the Garey side of the field and went straight to a Knight player, who knocked it down. That allowed Mario Salcedo to send a through ball to Oropeza, who beat out a defender to ball and flicked it into the net from about 10 yards out.

“Their mistakes turn into our treasures,” Oropeza said. “It just felt good to go to the third round.”

Aguayo had a few more crosses later in the half to give his team opportunities, but a lot of shots were saved by the Garey goalkeeper or kicked away by the defense. Aguayo used his ball-handling skills to keep the ball away from Garey and flick it down the field and to his teammates.

“Ever since I was a kid, I just always worked on my craft and it got me to where I am today and I’m proud of what I’ve accomplished,” Aguayo said. “I play winger, so you’re always supposed to be creative and have the defenders guessing and that’s exactly what I do.”

The Knight defense played strong throughout the game as they limited Garey’s shots to four, which were all saved by goalkeeper Francisco Bravo, who earned the shutout victory.

Mendez was happy for his team’s playoff success so far after a tough regular season.

“I’m proud of the boys. We had a hard, long season,” Mendez said. “We started really well and then lots of injuries and the guys started recovering at the end of the season. So, we’re kind of peaking at the right time.”

“Even after he came back, it took him a few games to come back and start finishing,” Mendez said. “Now, his confidence is up, so he’s finishing really well.”

Oropeza also scored the game-winning goal in the Hawks’ 3-2 overtime victory over No. 3 seed Schurr on Wednesday.

“It was intense,” Oropeza said. “We had a free kick last minute and I scored that and we won the game.”

Mendez is hoping his team can hold on to the momentum they’ve had this week.

“If we can keep this momentum going and keep this type of game speed, hopefully we can go further,” he said.

Knight will play Culver City at home in the quarterfinals on Tuesday. Culver City defeated Artesia 3-1 on Friday.

“We just have to stay focused, locked in, and keep the same mentality game by game,” Aguayo said.