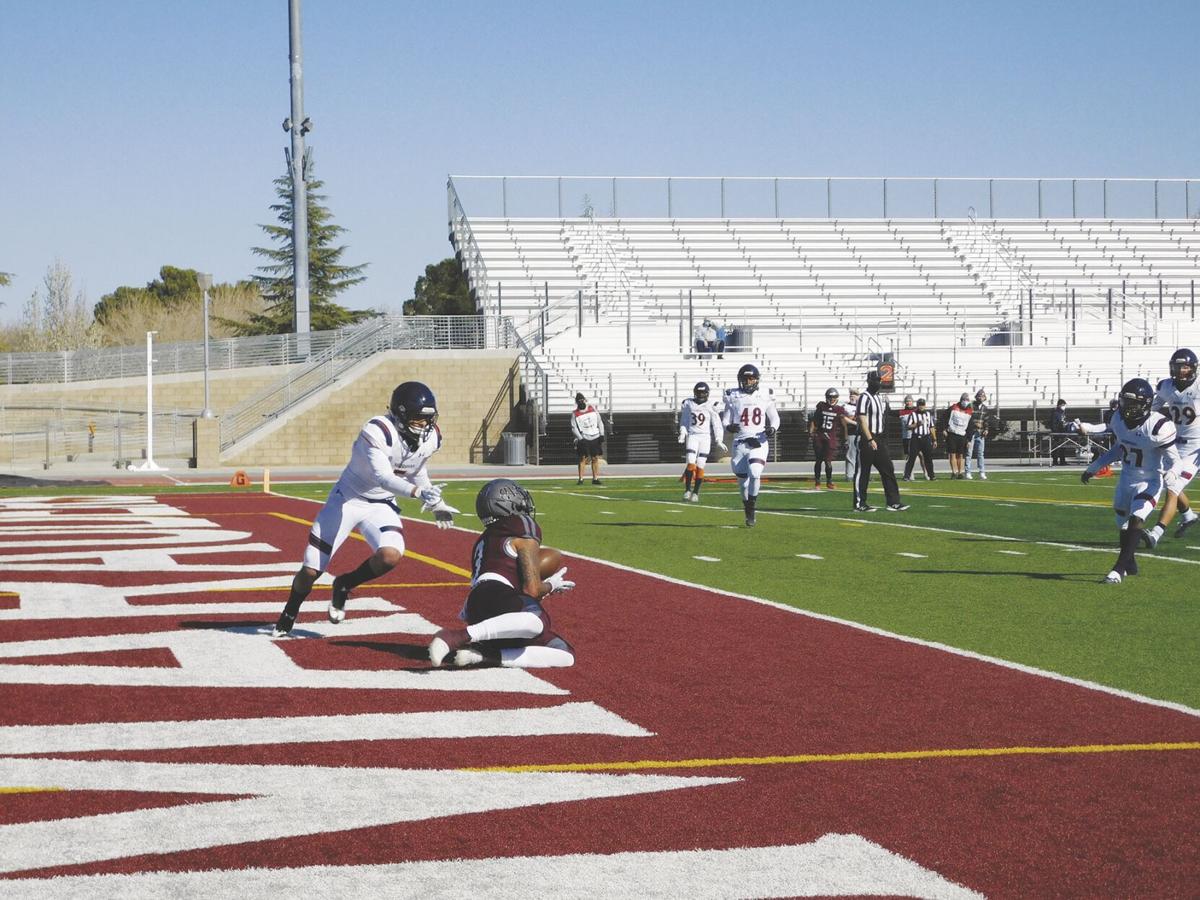 SCORE — Antelope Valley College wide receiver Davon Jones catches a touchdown pass in the end zone as College of the Sequoias defensive back Anthony Cervantes (5) watches in the second quarter on Saturday. Jones recorded three touchdowns in the Marauders’ 33-13 victory. 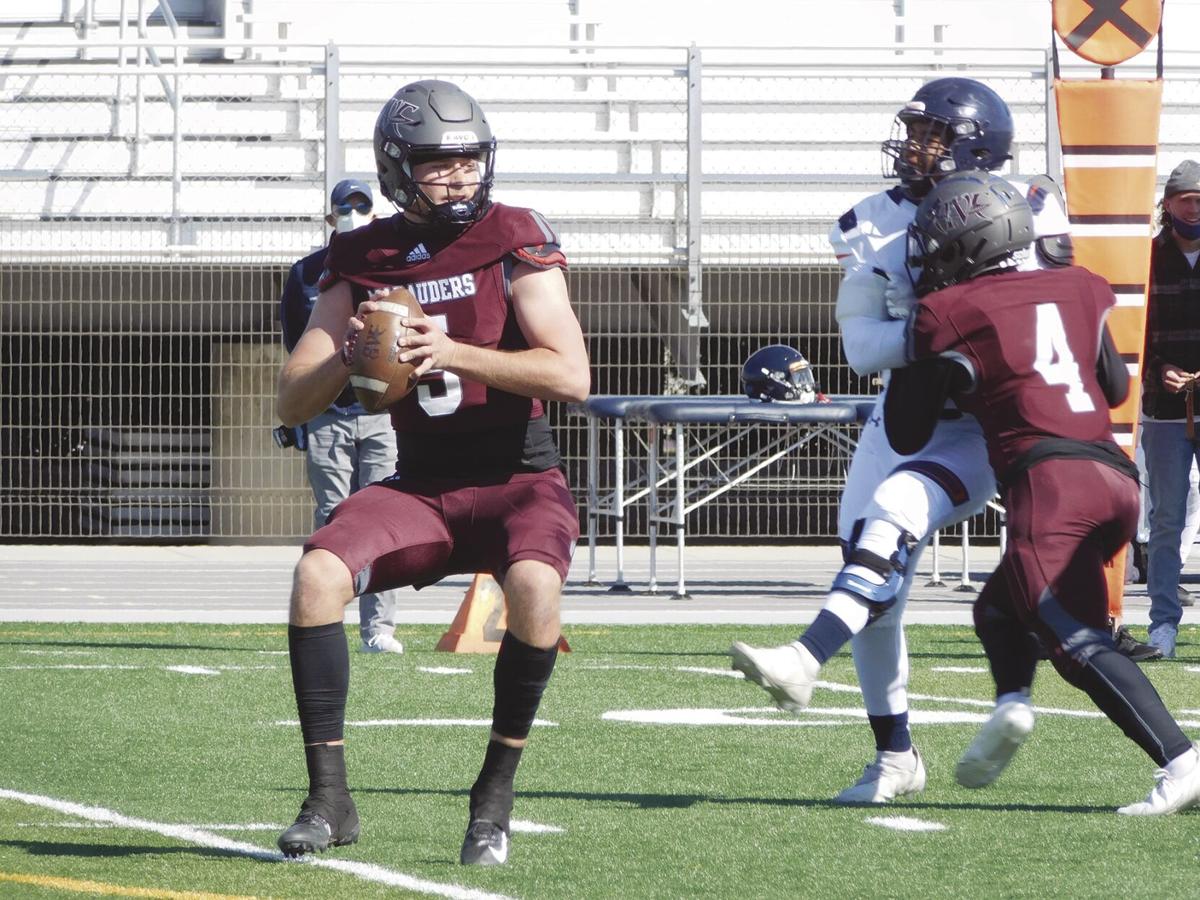 SCANNING — Antelope Valley College quarterback Caden Hinton (5) gets a block from teammate Jaylen Oneal (4) as he prepares to throw a pass against College of the Sequoias on Saturday. The Marauders won 33-13.

SCORE — Antelope Valley College wide receiver Davon Jones catches a touchdown pass in the end zone as College of the Sequoias defensive back Anthony Cervantes (5) watches in the second quarter on Saturday. Jones recorded three touchdowns in the Marauders’ 33-13 victory.

SCANNING — Antelope Valley College quarterback Caden Hinton (5) gets a block from teammate Jaylen Oneal (4) as he prepares to throw a pass against College of the Sequoias on Saturday. The Marauders won 33-13.

LANCASTER — The Antelope Valley College football team won its first game of the season — and first game since November 2019 — with a 33-13 victory over College of the Sequoias at Brent Carder Marauder Stadium on Saturday.

“It feels great,” said AVC running back Xavier Clay, who got hurt in the third game of the 2019 season and hadn’t played since. “With COVID happening and everything, it feels good to come out and play a game with my brothers.”

Added wide receiver Davon Jones: “It feels great to be back out here. … We’ve been practicing against each other for a minute. It felt good to play a real game, play against somebody else.”

The excitement was definitely there for both teams, who sometimes looked like that hadn’t played a competitive game in 16 months.

There were fumbles and interceptions and avoidable penalties, mostly for the Giants (0-1) who had several penalties for too many men on the field.

The Marauders (1-0) had a stellar defensive play where they blocked a punt and had the ball at the Sequoias’ 1-yard line, but immediately coughed the ball up on the next play.

“I thought we played a good football game,” said AVC coach Perry Jehlicka said. “We struggled a little bit there in the first quarter, which I think is fairly normal when you haven’t played a football game since November 2019. I knew the defense would have to carry us a little in that first quarter and they did and our offense started rolling.”

AVC’s offense struggled at times, but really started to click in the second half, scoring on two of their first three drives.

“We just ran the ball, keep punching at their throats, just keep going and going and going,” Clay said. “The O-line did great. They were blocking very good.”

Their first drive back from the break ended with a 51-yard touchdown run by Clay on the fourth play from scrimmage. On the first play of their third possession of the second half, quarterback Caden Hinton threw a short pass to Jones, who rushed the rest of the way just out of reach of the Giants’ defense for a 48-yard score.

“I thought they played a really good second half,” Jehlicka said of his offense. “That’s what you hope to see, they got better throughout the game.”

Clay finished with 163 yards on 13 carries, including a 60-yard run that helped set up a touchdown in the second quarter. He also had a long run where he ran into a group of players, reversed and ran to the backfield before traveling back down the field on the left side.

“At first, I was like, ‘I’m not going to go down,’” Clay said. “So I just reversed the field and I saw everybody in front of me blocking, so I just got yards. It’s what I do.”

Jones picked up 137 yards receiving on eight touches. He scored three touchdowns in the game, catching a 14-yard pass in the end zone after Clay’s run in the second quarter, and an 11-yard score in the third quarter for the Marauders’ final touchdown.

“Our O-line did great today, our quarterback played good today,” Jones said. “We started out slow, I made a couple of catches along with my other receivers. We played good. … We were just playing our roles in the offense, executing. Defense played great, got a lot of turnovers for us. The real deal on that side.”

While the AVC offense had some miscues in the first half, the defense was firing on all cylinders from the get-go.

The Marauders’ defense blocked two punts, including one in the first quarter on the Giants first punt, which AVC’s Dedrick Moore brought in for a touchdown to make it 6-0 with 13:29 left in the opening quarter.

Raymond Womack added two interceptions for the Marauders for 19 yards, his longest a 15-yard return that came right to him in the second half.

“They felt great,” Womack said about his two interceptions. “Great first game back. I couldn’t describe it any other way. I’m grateful.”

After a bad snap on a punt attempt by AVC gave COS the ball at the AVC 14, the Marauders sacked Giants quarterback Tate Robards for a loss of 10 yards on the first play. The Giants ended up settling for a field goal.

COS did not record a first down in the third quarter as AVC forced three-and-outs on four consecutive drives.

“I’m very proud of how we played,” Womack said about the defense. “We put a lot of pressure on ourselves every day to be better.”

The Giants finally got a touchdown with 7:03 left in the fourth quarter on a 25-yard touchdown pass from Robards to Willie Neal Jr. COS kicker Carlos Dominic hit two field goals from 37 and 28 and recorded the PAT on the touchdown.

Ikahihifo, who transferred to AVC with his brother, Tooni, from Nevada, was ejected after his final catch  — a 14-yard pass that helped set up the team’s final touchdown. Henry Ikahihifo got tangled up with the Giants’ Jacob Torres after the play. The two had some incidents throughout the game and both were ejected for unsportsmanlike conduct.

“They’ve been a great addition,” Jehlicka said of the brothers. “Good football players and we were very excited when they came in at the semester. ... Henry made some good plays for us today and Tooni looked good at quarterback in that fourth quarter. They keep getting better.”

So far, the Marauders have just one more game on their schedule — another matchup against COS on the road on March 25 — but they are hoping some more schools will join in during the season. For now, they’re the only community college team competing in Southern California.

“It’s a credit to both teams and both schools,” Jehlicka said. “Our administration has been phenomenal, President Ed Knudson and our athletic director Tom Gang, for getting us to where we can play during this. It’s been a complete community effort.”

While they might only get these two games, the players are grateful for the opportunity.

“It’s a blessing to be able to play,” Jones said. “There’s a lot of schools that can’t play right now. … We don’t even know how many games we’re going to play, so just take advantage of being out there. Everybody go get their film, make plays and just get better.”