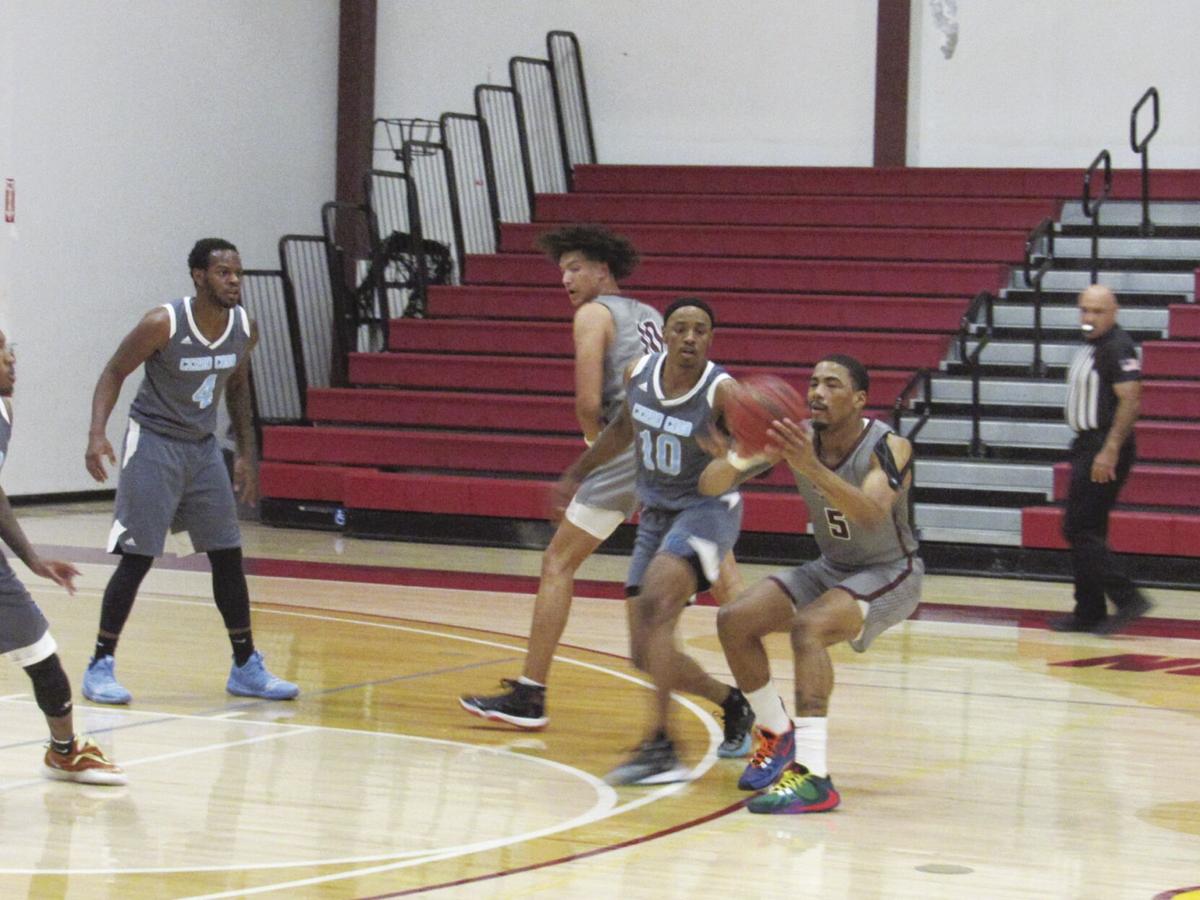 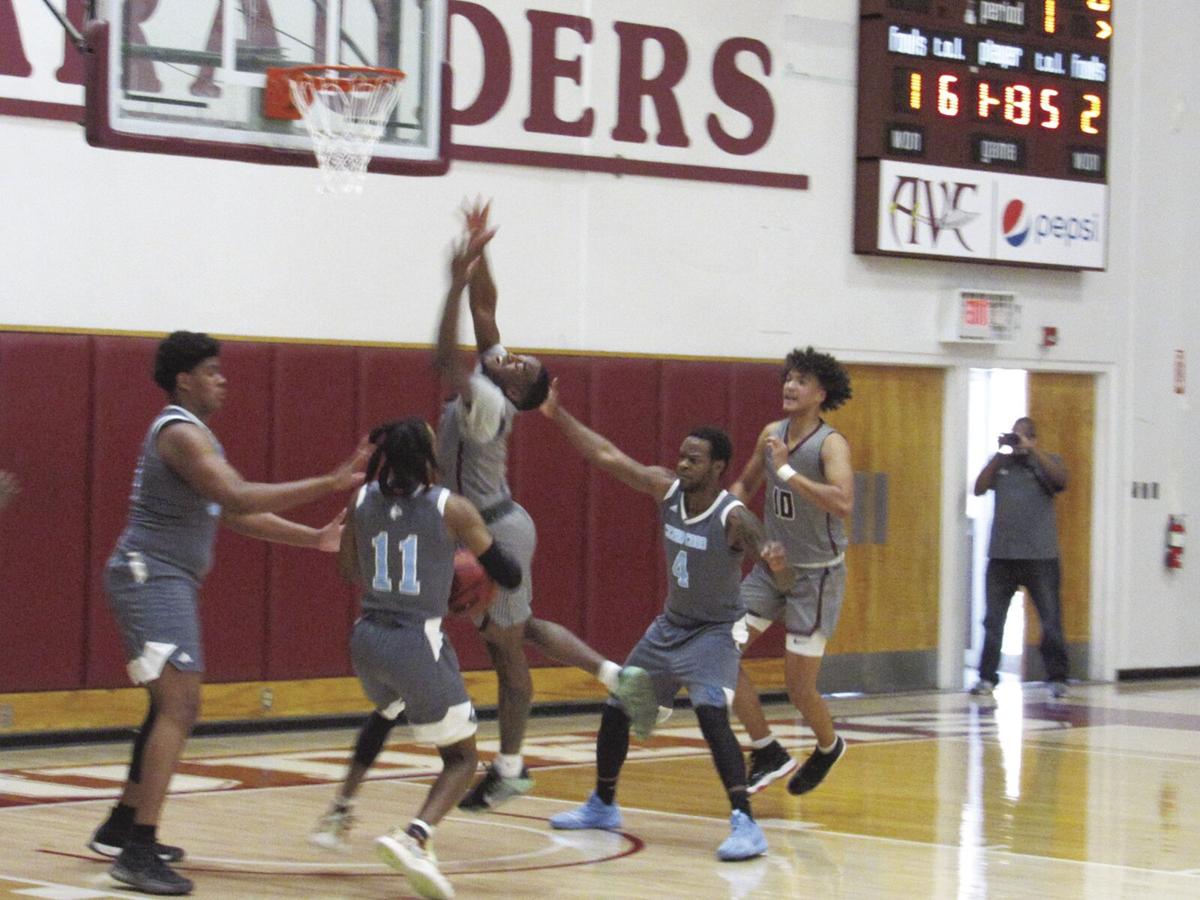 CONTACT — AVC sophomore guard Mekhi Smith loses the ball as he drives to the basket against Cerro Coso on Saturday afternoon at Marauder Gymnasium. Smith led the Marauders with 14 points in an 83-70 victory.

CONTACT — AVC sophomore guard Mekhi Smith loses the ball as he drives to the basket against Cerro Coso on Saturday afternoon at Marauder Gymnasium. Smith led the Marauders with 14 points in an 83-70 victory.

It was less than 24 hours when the Marauders took the court again after suffering an 81-62 road loss at the hands of Cerro Coso in Ridgecrest on Friday night to open their abbreviated season.

AVC certainly forgot about Friday night’s game and even Coyotes’ head coach Chris Dugan probably said it best, “we didn’t come ready to play,” he said after the Marauders jumped out to a 20-6 lead on Saturday.

“We’re still in Ridgecrest,” he told his team.

It turns out he was right. AVC erased any doubt about its potential and talent and smacked the Coyotes in the face early and cruised to an 83-70 victory, Saturday afternoon, at Marauder Gymnasium.

It was only the second game of the season for the Marauders although it was Cerro Coso’s (3-1) fourth. The Coyotes entered the game averaging 96 points per game and having defeated their opponents by an average margin of 24 points per game, including Friday night’s victory over the Marauders.

AVC (1-1) had six players score in double figures led by Elijah McCoy who finished 16 points and 13 rebounds. Mekhi Smith had his usual day at the office with 14 points, three rebounds, three assists and three steals. Joshua Assiff had 13 points and Stephen Perry added 12. Omari Mathis chipped in with 10 points.

“It was just our execution on the defensive end. We were very patient on offense and we executed unlike (Friday night),” McCoy said. “Today we kept our energy up and we kept taking it to them. It’s amazing to see what these boys can do. Last night was a little irking to us, but today we accepted the challenge.”

AVC took a 17-6 lead following a 3-pointer by Johnathan Mitchell. Stephen Perry followed that up with a 3-pointer of his own to extend the lead to 20-6. McCoy hit a bucket underneath the basket and midway through the first half the Marauders led 30-11.

“We played much better defense tonight. Last night we gave up 17 3-pointers and we gave up only six today. I think the first half really showed what we’re capable of,” AVC head coach John Taylor said. “Overall we were just a much better team today. We were much more focused. Guys are still getting used to each other.”

Taylor said his team has only been practicing a little less than three weeks compared to the two or three months to get ready on a normal season.

Assiff muscled up underneath the basket to score a basket with 2:52 remaining in the first half to give AVC a 44-26 lead. He failed to convert the old fashioned 3-point play, but that still kept the Marauders at a comfortable distance.

Another 3-pointer by Perry, who hit three on the evening, followed by a rebound and put back by McCoy propelled AVC to a 49-26 lead with 90 seconds remaining. The Marauders led 51-29 at halftime.

“It’s all about learning and being disciplined. We came out today with a better mentality. We were locked in. It was the little things that we did today,” Assiff said. “We’re still gelling and learning where each other are on the court. In the second half I thought we could have been more smash mouth, but I’m happy to get my first collegiate win. We just have to continue to play harder.”

A few times in the second half the Coyotes would cut the lead to 16 or 14 points, but AVC’s stingy defense never let them really make a run to get back in the game.

At one point with just under six minutes remaining in the game Cerro Coso cut the lead to 66-52 following a 10-2 run, but Perry stopped the bleeding with a 3-pointer to put AVC back up 69-52. Daniel Barrera knocked down a 3 followed by another by Smith and just like that the Marauders deflated the Coyotes egos and led 75-56.

“We’ve got so many shooters on this team,” Assiff said. “We’re deadly.”

The two teams meet again to end the regular season on April 16 and 17 for another home-and-home series.

“I’m just happy they get to play. I like that our president and AD fought for us to play,” Taylor said. “I love this team.”