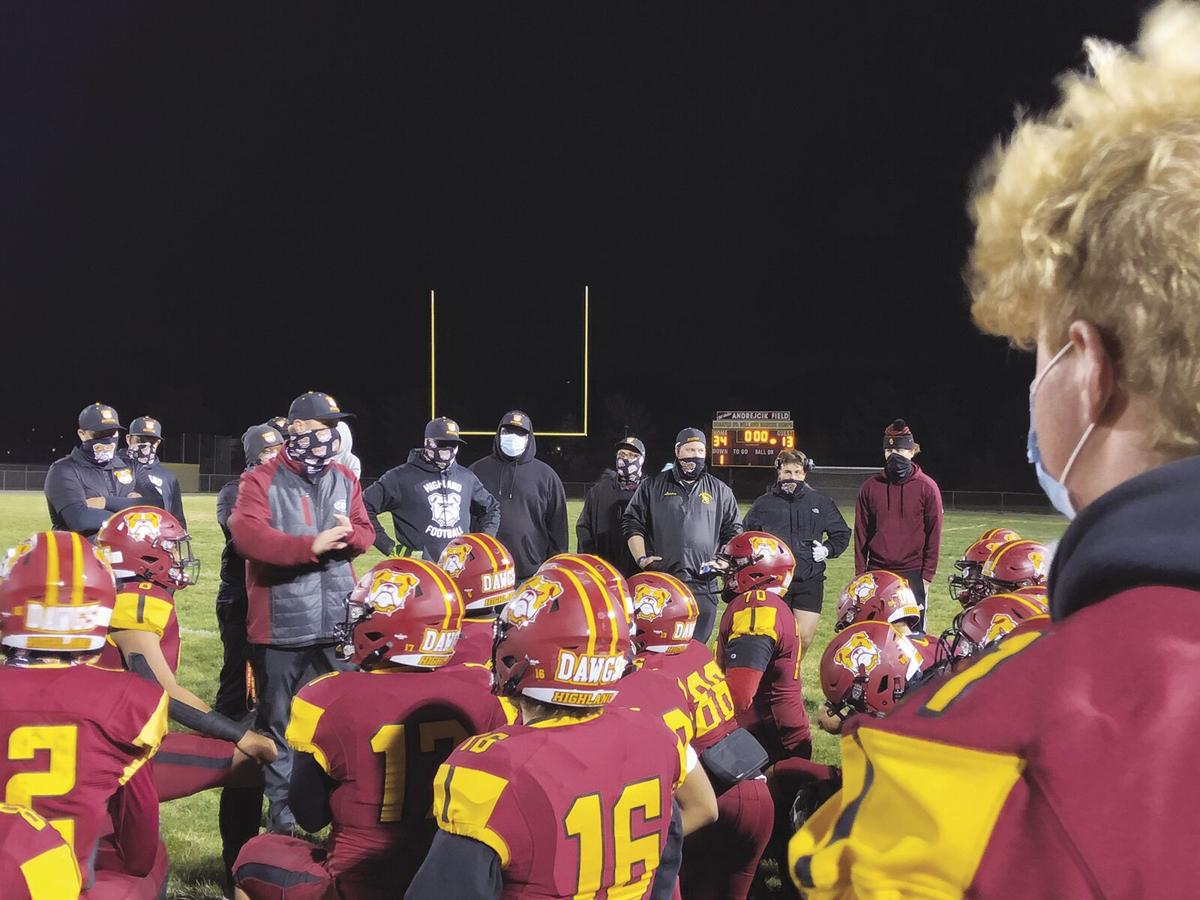 CONGRATS —Highland football coach Richard Lear addresses his team after they defeated Palmdale 34-13 in the season opener on Friday night at Highland High School. The Golden League game was the first since the 2019 season. 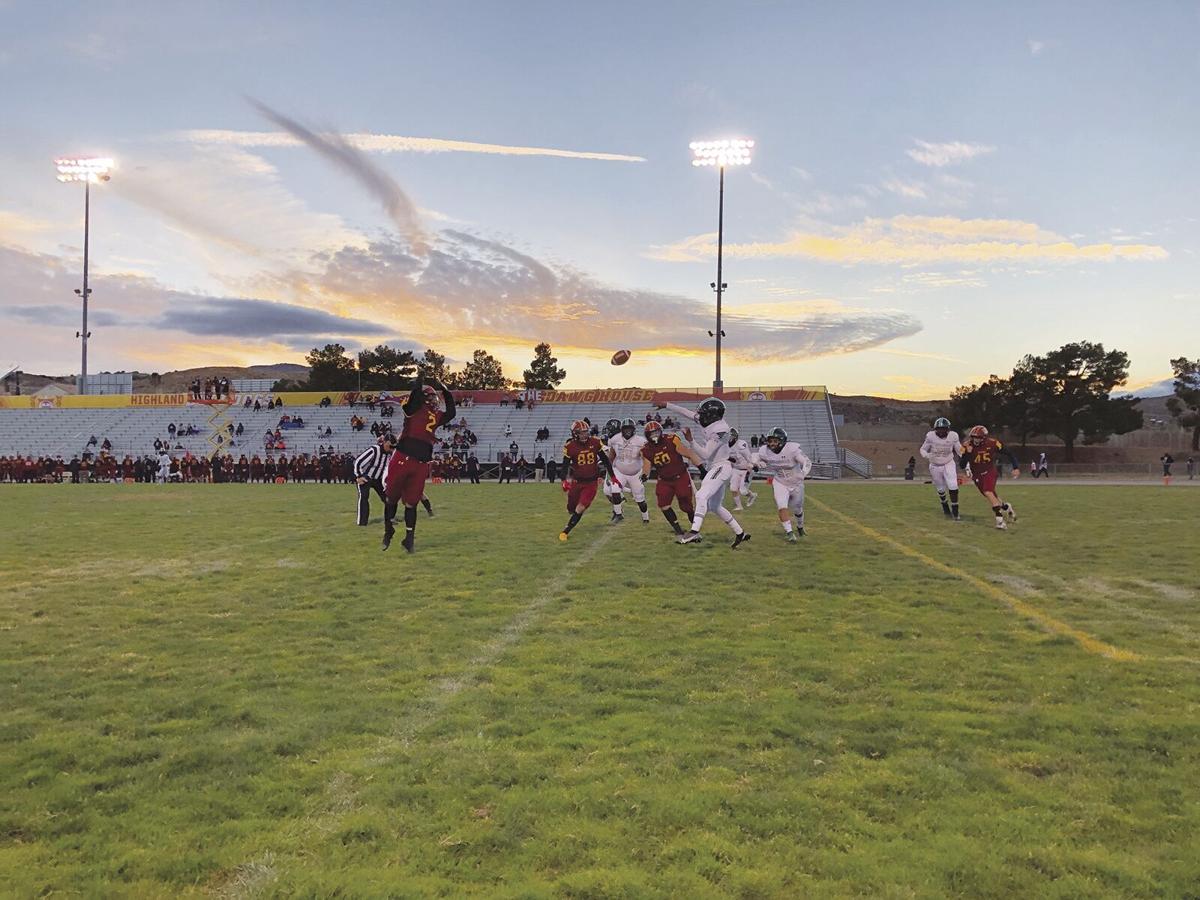 CONGRATS —Highland football coach Richard Lear addresses his team after they defeated Palmdale 34-13 in the season opener on Friday night at Highland High School. The Golden League game was the first since the 2019 season.

PALMDALE — The Highland football team started its game Friday night against Palmdale like a returning CIF champion that has been eager to step on the field for 15 months.

The Bulldogs’ defense stopped Palmdale on the opening drive, blocked a punt and scored on their opening possession.

Highland was able to dominate cross-town Golden League rival Palmdale 34-13 in the season opener for both team at Highland High School in an abbreviated five-game season.

“I think we came out with some real good intensity,” Highland coach Richard Lear said. “Palmdale is a good football team over there and to beat them the way that we did shows you how hard our guys have been working in the offseason, how hard we have been working the last couple weeks to prepare. It showed by a significant victory.”

Lear said his team had been practicing since July in pods, but in pads for the last two-and-a-half weeks.

Palmdale beat Highland 25-24 in the last matchup during the 2019 season as the Falcons won the Golden League title, but Highland went on to win the CIF-Southern Section Division 9 championship.

Warren completed 9-of-13 passes for 94 yards and rushed for 34 yards on nine carries, including a 2-yard touchdown run late in the fourth quarter.

Warren said he realizes he has ‘pretty big shoes to fill’ being the quarterback of a returning CIF champion.

“I had to come out here, dual threat run and throw, and beat the Falcons,” Warren said.

Although Palmdale tied the game at 7-7 with a 5-yard touchdown run by junior quarterback Nathanial Mealancon early in the second quarter, set up by one of two fumbles recovered by Palmdale junior Devon Wilson, Highland answered with two touchdowns in the final five minutes of the first half.

Highland sophomore running back Brandon Johnson scored on a 15-yard run after the Falcons had tied the game. He finished with 62 yards rushing on 11 carries.

The Highland defense stopped Palmdale on the ensuing drive and the Falcons were forced to punt a second time after being penalized. The Bulldogs capitalized on the second punt attempt, as senior Reece Robinson returned the punt 40 yards to give Highland a 21-7 halftime lead.

“I think we played well,” said Highland senior defensive lineman Esai Martinez, who transferred from Calabasas. “Obviously we have more to improve. We came out as a team and for our first game, I think we did all right.

“I’ve been waiting for this moment. Probably almost a year we haven’t been playing football.

“Coach Lear is a great coach.”

The Falcons suffered a big blow early in the second half as Mealancon was injured and helped off the field when he was sacked by a group of Highland defenders.

Highland scored on the ensuing possession on a 21-yard touchdown run by junior Kai Bronner early in the fourth quarter.

“I think we played very well,” Warren said. “A couple of mistakes on my side. I threw a pick, fumbled. I’ve got to clear it up. I think next week I’ve got to go into practice, fix those mistakes and come back next week against AV.”

Warren was intercepted near the goal line early in the fourth quarter and the Falcons were able to capitalize on the turnover, as Palmdale sophomore Damrio Jackson on a 92-yard run.

“I don’t think we did a good job preparing, getting the boys prepared,” Palmdale coach Eric Nickols said. “Definitely didn’t get the boys in shape for the physicalness of playing a returning CIF champ.

“We’re real young too. Majority of that team are underclassmen. There’s a couple of seniors.”

Highland finished with 244 total yards, including 150 rushing on a combined 31 carries by five different players.

“I’m sure every coach would have liked to have the opportunity to prepare a little bit more,” Nickols said. “Unfortunately, we didn’t get that opportunity. We’ve got to do what we’ve got to do.

“The offseason, trying to train in pods and getting the call ‘Hey, let’s go.’ ”