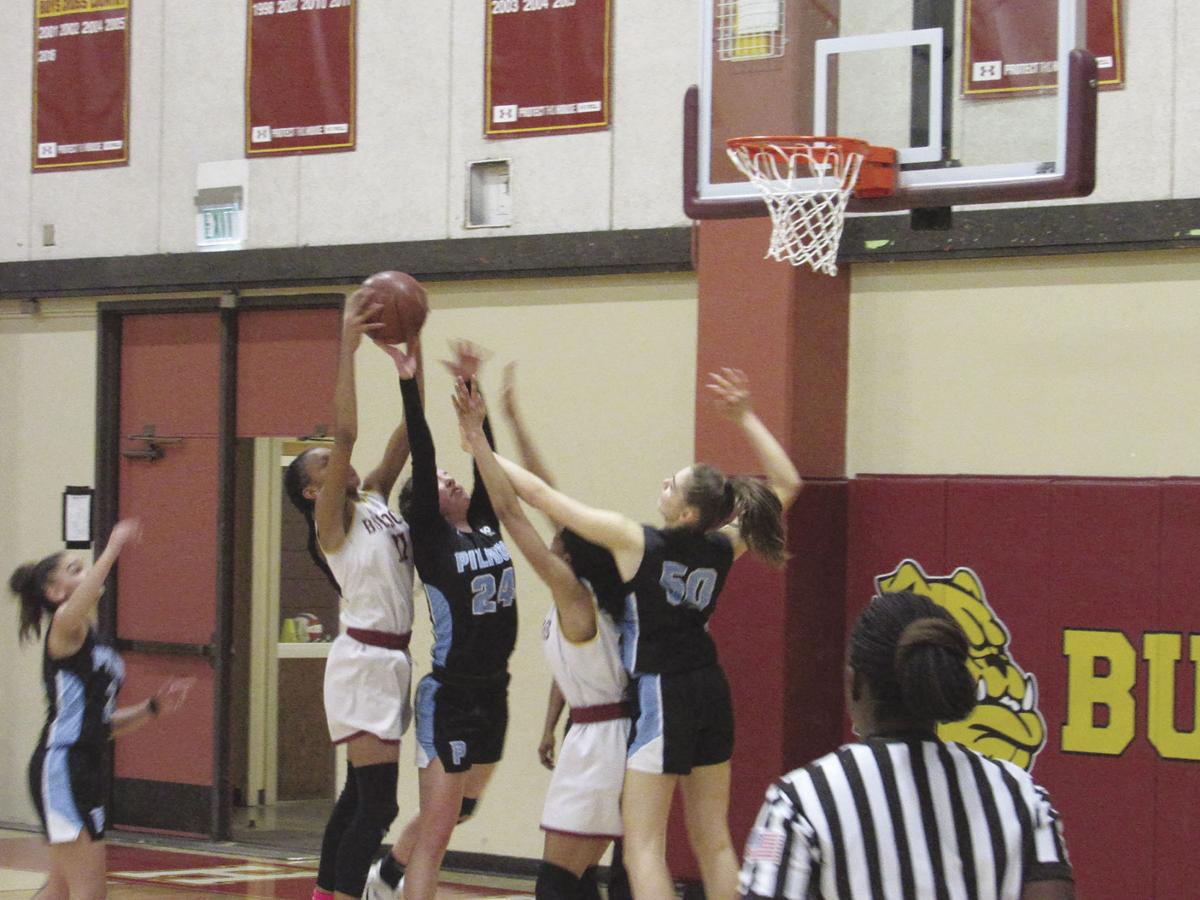 GOT IT — Highland’s Eriel Banks, left, grabs a rebound away from a Pilibos player in a CIF-Southern Section Division 4AA playoff game on Thursday. Highland won 47-31. 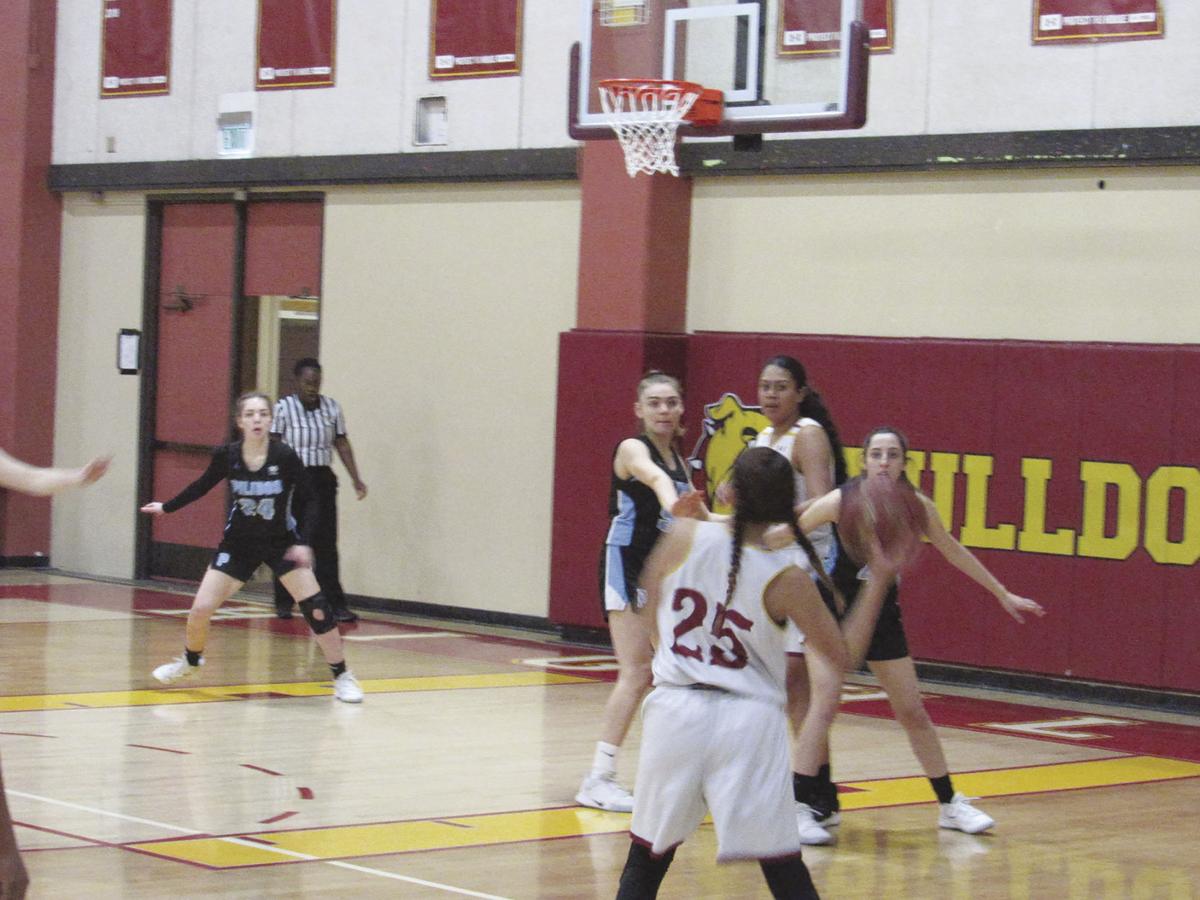 PASSING GAME —Highland’s Milana Mercado looks to pass the ball against Pilibos in the Bulldogs’ 47-31 first-round playoff victory on Thursday.

GOT IT — Highland’s Eriel Banks, left, grabs a rebound away from a Pilibos player in a CIF-Southern Section Division 4AA playoff game on Thursday. Highland won 47-31.

PASSING GAME —Highland’s Milana Mercado looks to pass the ball against Pilibos in the Bulldogs’ 47-31 first-round playoff victory on Thursday.

Dickson opened the fourth quarter by hitting her first two free throws. On visiting Pilibos’ ensuing possession Dickson got a steal and went coast-to-coast for a layup, which was capped with a Euro-step that ignited the crowd.

That put the Bulldogs up by nine points and they went on a roll from there.

“We played hard. Our third quarters have been our worst. But we always seem to come back and finish,” Bulldogs’ head coach Jeff Sisson said. “Fundamentally we did well as a team. I think nerves might have got the best of them. They know from here on out it will be an uphill battle. I think the second round will be different.”

However, the Eagles began to chip away at the lead and the Bulldogs’ lead was cut to only 27-17 at halftime.

“We worked together and we executed well in the end. When they got back into the game we let up a bit and we had a lot of turnovers,” Dickson said. “We just had to keep our heads in the game and stay focused. Overall, it was a pretty good game, other than the turnovers. We were nervous, but winning this game will give us more confidence going into the next round.”

Dickson led the game with 20 points, but was only 4-of-15 from the free-throw line.

Pilibos’ game plan was simple. Pack the inside and clog up the middle to stop the 6-foot Dickson. It worked in the third quarter when the Eagles mounted their comeback.

Leading 27-17 entering the second half, the Bulldogs had their offensive woes. Highland only scored two points in the quarter by Katelynn Arreola and that came with 29.7 seconds remaining in the quarter. Arreola’s bucket broke an 8 ½ minute scoring drought for Highland.

Pilibos took advantage of the Bulldogs’ slump and trimmed the lead to 27-24 with 2:30 left in the third quarter.

“Our defense messed up in the third quarter. I thought we did okay. I know we could have played much better,” Highland’s Eriel Banks said. “We really wanted to move on to the second round. We’ve been working hard on defense. I thought we played well as a team.”

Banks finished with 10 points and teammate Kimberly Leon added seven. Milana Mercado drained two 3-pointers to finish with six points for the Bulldogs. One of Mercado’s 3-pointers in the fourth quarter put her team up 39-26 with 5:15 remaining.

“We’ll make our adjustment we need to make. The girls are battle tested and we’re ready as long as we execute,” Sisson said. “It was good to get this one under our belt. Our first mission was league and next was playoffs and to make it to the top.”

The Bulldogs’ defense was stingy and forced the Eagles into 26 turnovers. Many of those turnovers resulted in easy transition baskets on the other end.

Dickson put the exclamation point on Highland’s victory following a steal and easy layup increasing the lead to 45-31 with less than a minute left.