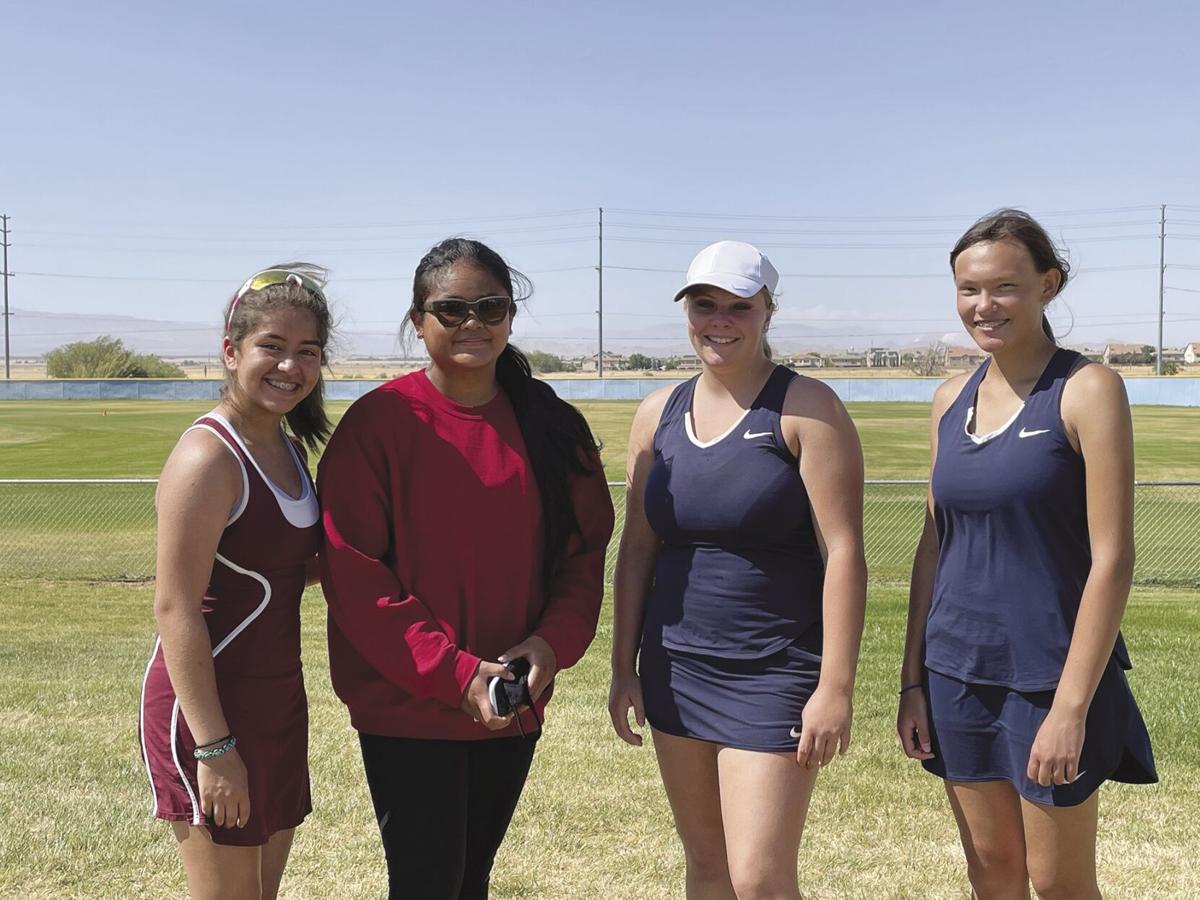 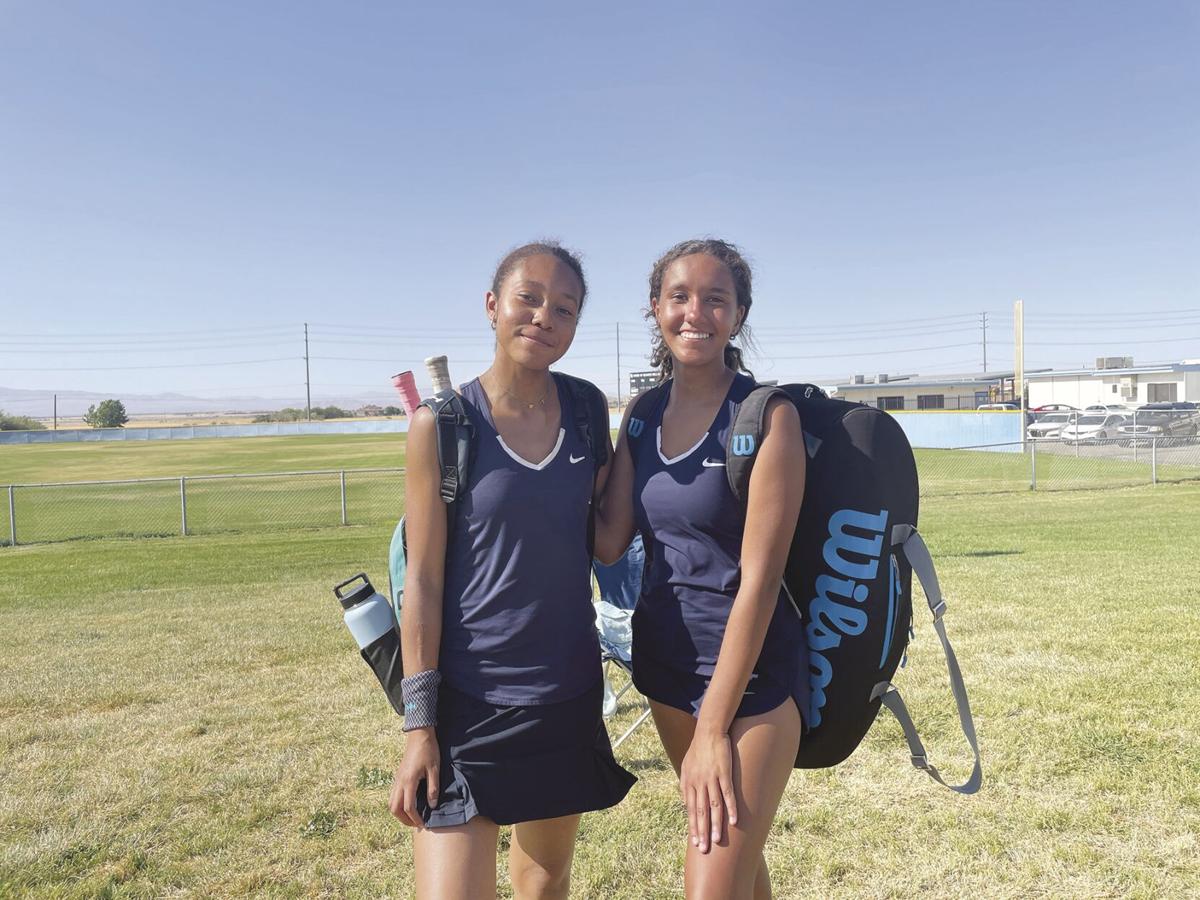 QUARTZ HILL — Last week, the Golden League girls tennis teams didn’t know if they would be able to hold their league tournament this season, because of COVID protocols.

But the schools were able to get approval from the county and held the abbreviated tournament of four singles players and four doubles teams over two days this week.

The finals for both doubles and singles were at Quartz Hill High School on Friday afternoon.

Bravo and Padilla won the league championship with a tight, 7-6 (7-3), 7-5 victory over Quartz Hill’s No. 1 doubles team of senior Brooke Faulk and sophomore Skylar Antoniewicz.

“It feels really good,” Padilla said. “The stress just went off my chest.”

It was an interesting day for Bravo, who only found just before the match that she would be playing Friday.

“I didn’t know I was coming until 30 minutes prior,” Bravo said. “I was in chemistry and my mom came into my room and she told me, ‘Hey, get ready, your coach is going to be at Highland.’ I was like, ‘What?’

“I was really excited to play.”

The first set was back and forth for the top two teams. But the Highland duo took charge in the tiebreaker.

“We definitely went in confident,” Padilla said. “That first one, when we were down, we just kept on telling ourselves, ‘The only thing you need to do is stay consistent with your shots.’ … It was back and forth, back and forth and then we killed it in the tiebreaker.”

Padilla and Bravo fell behind 5-2 in the second set. But strong serves and returns helped them battle back to win five straight games and the match.

Bravo finished second in doubles in 2019 with a different doubles partner. She was happy to be able to go a step further with Padilla this year.

“This year I was really going for first place with Nicole and we did it!” Bravo said. “I’m just so proud of my partner.”

The two were partners for a short time last season, but couldn’t stay together for eligibility reasons.

“This year definitely brought us closer together,” Padilla said. “We tell each other things we don’t tell anyone else. We’re doubles partners and I feel like she’s my sister.”

It was the toughest match of the year for Faulk and Antoniewicz, who were undefeated during the regular season.

“They’re just a really good team,” Faulk said. “We were both nervous and you could tell they were nervous too. They just came off the bat swinging and we did too.”

After the tiebreak loss in the first set, the duo was proud of how they fought back.

“The start off, it took awhile,” Antoniewicz said. “We made a comeback, but we lost the last few points. We got beat, we didn’t lose.

“It was a good loss,” she added with a quizzical tone.”

Faulk, who had a couple of good hustles to get to shots, agreed: “We went out 100 percent.”

The duo played a team from Knight in the semifinals on Tuesday and won 6-0, 6-0. They were happy to get to second place and qualify for CIF Individuals.

Faulk will be studying fire technology and playing for Antelope Valley College next year, while Antoniewicz is hoping to work on her consistency for next season.

“This year, it was probably the most crazy, but I think for me, it was the most fun tennis season,” Padilla said.

Added Bravo: “It was. It was also an unexpected tennis season.”

Smithley and Lewelling took third place after defeating the team from Knight 6-0, 6-0 on Friday.

The singles championship was a big deal for Johnson, who won for the first time after being the runner-up the last two seasons and finishing third her freshman year.

“It’s exhilarating,” Johnson said. “I’ve worked really hard for it all the time, so this is a fantastic award to have.”

“It’s always hard playing your own teammate, just because you guys are such good friends,” Johnson said. “But when you’re on opposite sides of the court, it’s like the enemy.”

Johnson had a tough time in the first few games of the match, but when she went down 3-2 to Ogebe, she started to pick up her game and make the shots she was used to making.

“The second set, I was more comfortable and I was finding my rhythm, so it made it easier to power through,” Johnson said.

Ogebe, however, didn’t back down, putting together some good serves with a couple of aces and good shots throughout the match.

“I am extremely proud of her,” Johnson said. “She played very, very well.”

The two players were undefeated throughout the regular season, so Ogebe knew she would be playing her teammate in the final this year.

“I’ve been expecting this since the beginning of the season to play Riley, so I think mentally I was prepared for it, but I just treat it like any other match,” Ogebe said. “I’m proud of Riley, I have nothing against her, but she’s my opponent. We’re still best friends.”

Ogebe and Johnson were both supposed to play semifinal matches before the finals, but one of the top four players, Bernadette Bravo, couldn’t make it, resulting in Johnson getting a bye.

Ogebe defeated Highland’s Alexis Romano, who finished third, 6-3, 6-1, in the semifinals before taking on Johnson.

“My first match, I think I played really well,” Ogebe said. “I kept my composure, I kept my calm. I’ve played Alexis a few times in the past, which I’ve won, so I kind of know her style of play. But I think, personally, I played very well in that match, so I’m proud of myself.”

In the beginning of the finals match, it looked as though Ogebe was more warmed up than Johnson. But as the match continued, Ogebe said it became a disadvantage.

“I feel like playing a first match kind of tired myself out a little more instead of having an advantage,” she said. “It was kind of a disadvantage, but I still played my best.”

Ogebe is happy to walk away with her first league patch and qualify for CIF.

“It feels good. I think I deserved it,” she said. “I put in a lot of effort in my play, I play like 10 hours a day at least most days. I would like to thank myself for that.”

Johnson said she is looking forward to the playoffs, but is sad her league career has come to an end.