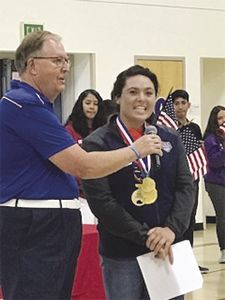 SPEECH — Highland grad and current UCLA and Team USA softball player Rachel Garcia answers a question during her visit to Palmdale Learning Plaza on Tuesday. Garcia took the time to talk with the students about their goals at the school she attended. 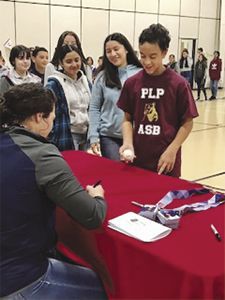 SPEECH — Highland grad and current UCLA and Team USA softball player Rachel Garcia answers a question during her visit to Palmdale Learning Plaza on Tuesday. Garcia took the time to talk with the students about their goals at the school she attended.

PALMDALE — Dean Gorder wanted to emphasize the importance of dreams and goals to his Palmdale Learning Plaza sixth graders.

Then he met Rachel Garcia.

Actually, the veteran educator only heard part of the story.

And that was only through last June.

Collegiate Softball’s premier player made a homecoming to PLP Tuesday, addressing an assembly of sixth, seventh and eighth graders.

About dreams and goals, of course.

“I remember when I was sitting where they are,” said Garcia, who handed out trading cards of herself with UCLA and Team USA images. “It was a thrill to meet Lisa Fernandez and other great players who took the time to talk to me.

“Now I hope I can help these kids the way I was helped.”

The PLP alumna was wearing her two gold medals from those triumphs — with space for a third.

Joe and Chris Garcia’s daughter became just the fourth player in  NCAA Softball history  to win the national championship and the national Player of the Year Award in the same season last spring.

She is now on loan to Team USA, preparing for the 2020 Summer Olympics in Tokyo.

That 2020, Rachel said, should describe the PLP students’ laser-like focus on their dreams and goals.

“The road isn’t always going to be smooth,” Garcia said, referring to her own devastating knee injury in her final high school game at Highland. “There are going to be bumps in the road.

“All the bumps did was make me work harder, and want it even more. I know every one of you can do that, too.”

As he watched the past, and the future, Dean Gorder could only smile from here to a decade ago.

“I’ve been in education for 50 years,” the retired teacher said, “and I’ve never met a more remarkable student than Rachel. “The more success she has, the more famous she becomes, the sweeter and more humble she is.

“For all those individual awards and trophies she has, I know the one she’s proudest of are the gold medals, and  UCLA’s national championship. That’s about we and us, not I, me and my.”

Gorder and his colleagues in education try to teach humility and selflessness, endlessly.

It helps when a living lesson of the same walks back into her old classroom.

Rachel Garcia Day was scheduled to continue at Tuesday night’s Palmdale City Council meeting, where she was to be saluted.

“We should honor her every chance we get,” Gorder said. Rachel gives back so much to her community with softball clinics and appearances like today.

“One of our seventh graders came up to take a picture with her, and Rachel said, ‘I remember you.’ She’s been at one of Rachel’s clinics. Well, from the look on her face, I don’t think her feet touched the floor going back to her seat.”