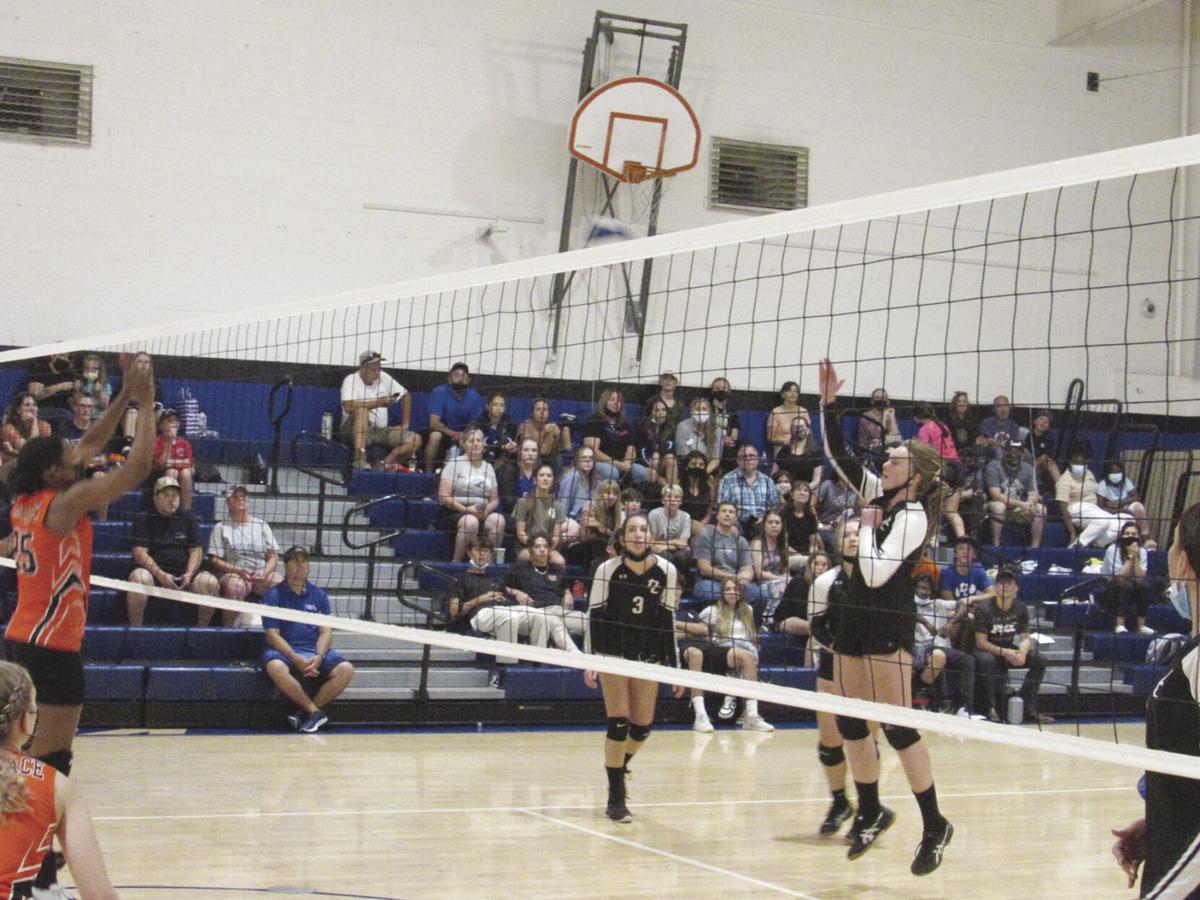 Desert Christian’s Lily Krieger (right) hits the ball over the net to The Palmdale Aerospace Academy in Tuesday’s Heritage League match. Krieger led the Knights to a five-set win with 12 kills, six blocks and five aces. 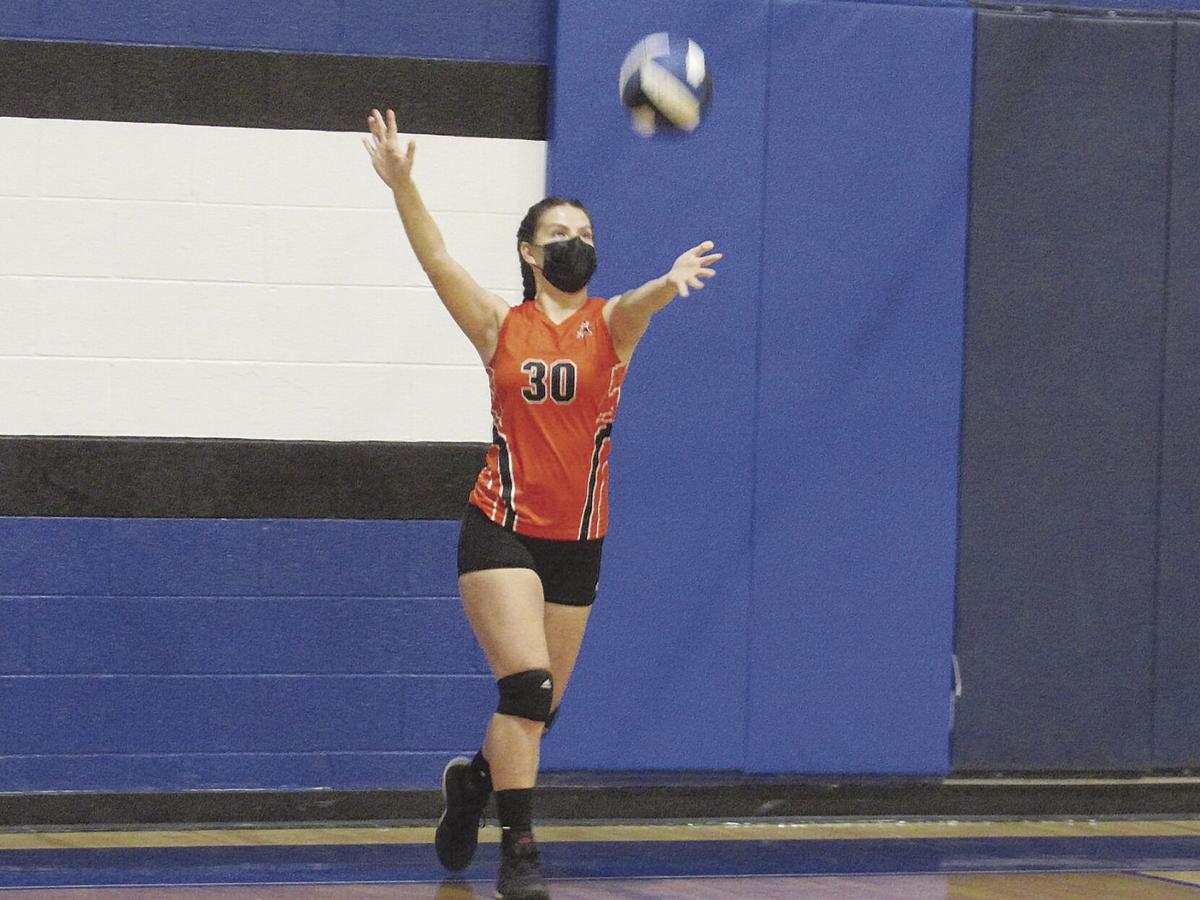 Palmdale Aerospace Academy’s Arelyne Ramirez serves the ball against Desert Christian on Tuesday. Ramirez led the Griffins with nine kills in a 3-2 loss to the Knights. 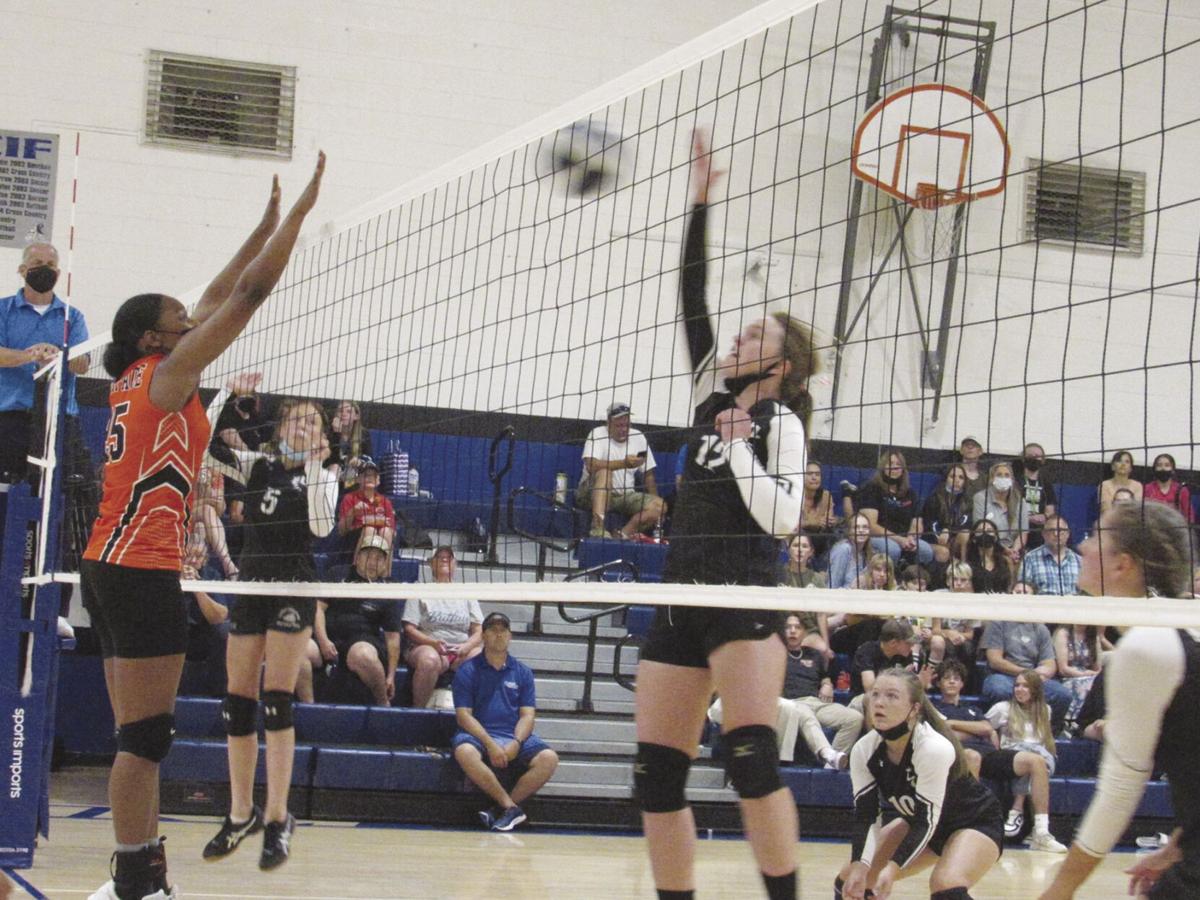 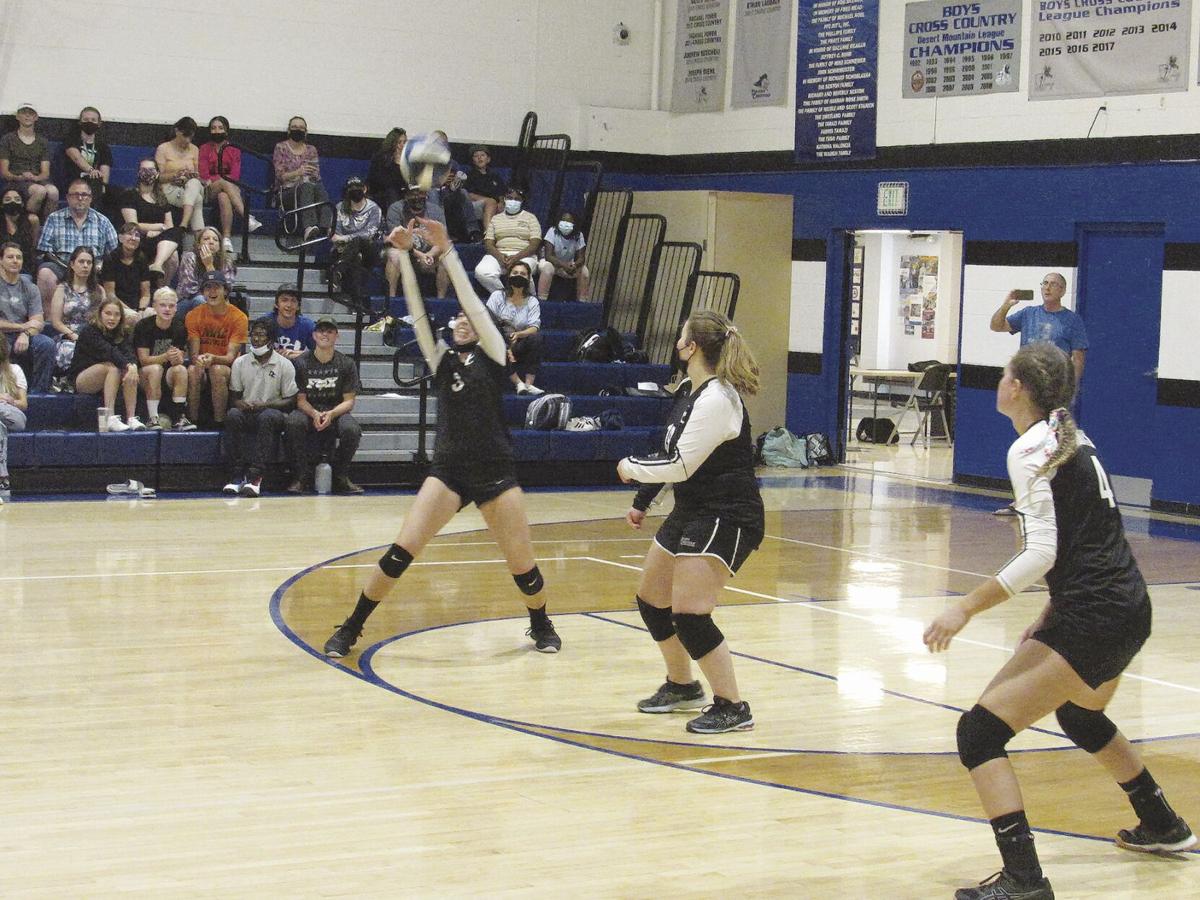 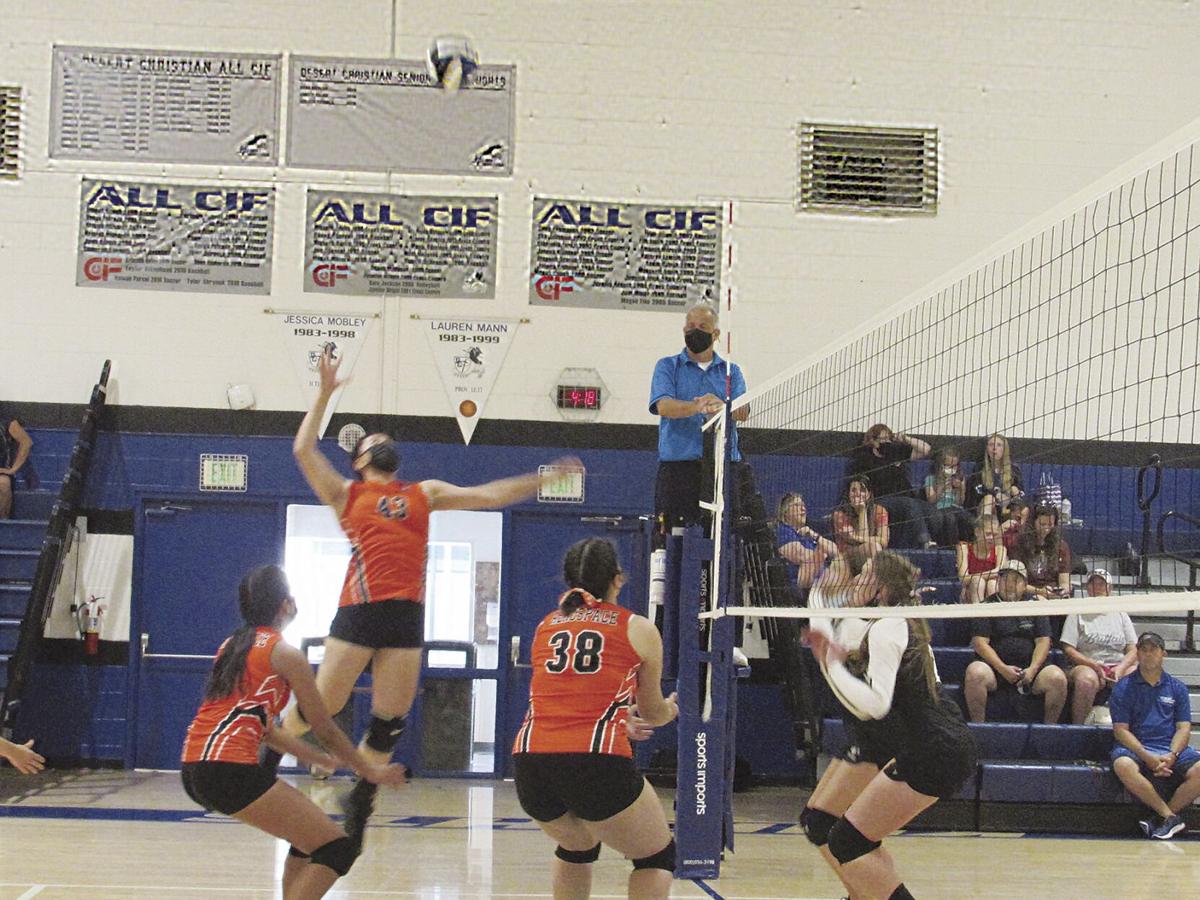 The Palmdale Aerospace Academy's Dianna Diaz smacks down one of her nine kills against Desert Christian on Tuesday.

Desert Christian’s Lily Krieger (right) hits the ball over the net to The Palmdale Aerospace Academy in Tuesday’s Heritage League match. Krieger led the Knights to a five-set win with 12 kills, six blocks and five aces.

Palmdale Aerospace Academy’s Arelyne Ramirez serves the ball against Desert Christian on Tuesday. Ramirez led the Griffins with nine kills in a 3-2 loss to the Knights.

The Palmdale Aerospace Academy's Dianna Diaz smacks down one of her nine kills against Desert Christian on Tuesday.

The Griffins dissolved a late seven-point lead in the second set in which they came back to win and staved off seven match points in the fourth set, while sending the match into a tiebreaker.

But it turns out the third time wasn’t a charm as the Knights said “enough is enough, not this time.”

With the victory, the Knights earned their first win of the season.

The first set went back and forth as the lead changed hands several times throughout. A kill by Shelby Case that split the Griffins’ defense gave the Knights a 22-20 lead. Desert Christian sealed the set following a block by Lily Krieger and Riley Wiser.

Desert Christian took that momentum into the second set and built an early 11-3 lead with kills from Krieger, Case and Kylie Royster. Three consecutive aces by Krieger also helped the Knights distance themselves. TPAA (4-2, 3-2), however, began to chip away.

“I thought overall we played well. Give it to Desert Christian though because they were on it a lot more,” Griffins head coach Ashley Silva said. “I liked how we persevered throughout the match.

“Overall I’m very proud of them. We have to work on our mindset because we have trouble letting things go even though the ball is coming right back at you. At the end of the day, I tell them it’s not about the score but how you played.”

Much like the first set, the third started off by Desert Christian (1-7, 1-3) building a comfortable lead and TPAA responding later. After the Griffins evened the match as both teams split the first 30 points, neither team took control.

Finally, TPAA grabbed a 23-22 lead. A ball that was hit into the net tied the score, 23-23. An ace by Katie Darwood followed by another hitting error by the Griffins sealed the set, giving Desert Christian a 2-1 lead.

“We fed off the crowd’s energy, especially in the fifth set. We fought really hard and tonight was a total team effort,” Desert Christian’s Madi Schweitzer said. “This is going to help the rest of our season knowing we’re capable of a win. I thought the whole team played well.

“Now we’ll see what we can do from here. I think this victory will impact the team and we’ll keep this energy for the rest of the season.”

Arguably the most intense set of the match came in the fourth set. The Knights began to separate themselves in the second half of the set. They built a 24-17 lead and seemingly had the match in hand, but the Griffins showed their resiliency and won seven consecutive points in front of a stunned Desert Christian partisan crowd.

Following a service error by TPAA, the Knights once again had match point, leading 25-24. Two errors by Desert Christian followed by a kill by Arelyne Ramirez to end the set finished the improbable comeback for the Griffins, while sending the match to a deciding fifth set.

“It was a good game, but obviously we could have played better,” said Ramirez, who led the Griffins with nine kills along with teammate Dianna Diaz. “Like coach said, we have a tough time moving on (after lost points) because we get down on ourselves.

“I thought our defense played well, but there are some things we need to fix. We knew coming in this was going to be a tough game.”

In the race to 15 in the final set, the Knights won the first six consecutive points. That deflated TPAA’s momentum and the Knights played even with the Griffins the rest of the set, never relinquishing the lead.

“This was a fun game for them,” Cataldo said. “In game five every single girl had a smile on their face. I’m 100 percent pleased with the victory.”

Celeste Rangel had three kills and two aces for the Griffins and Emily Velasquez-Moreno and Ashley Bueso each finished with four aces for TPAA.