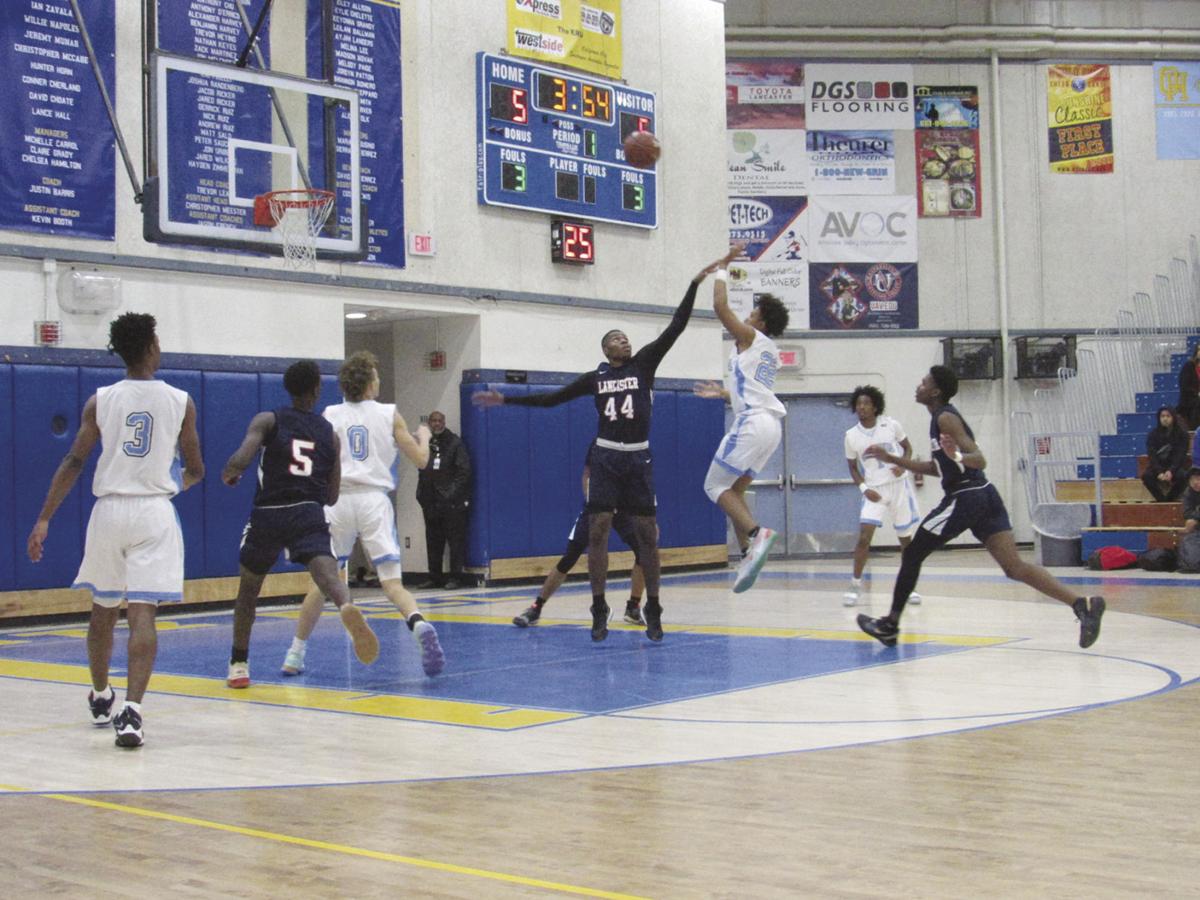 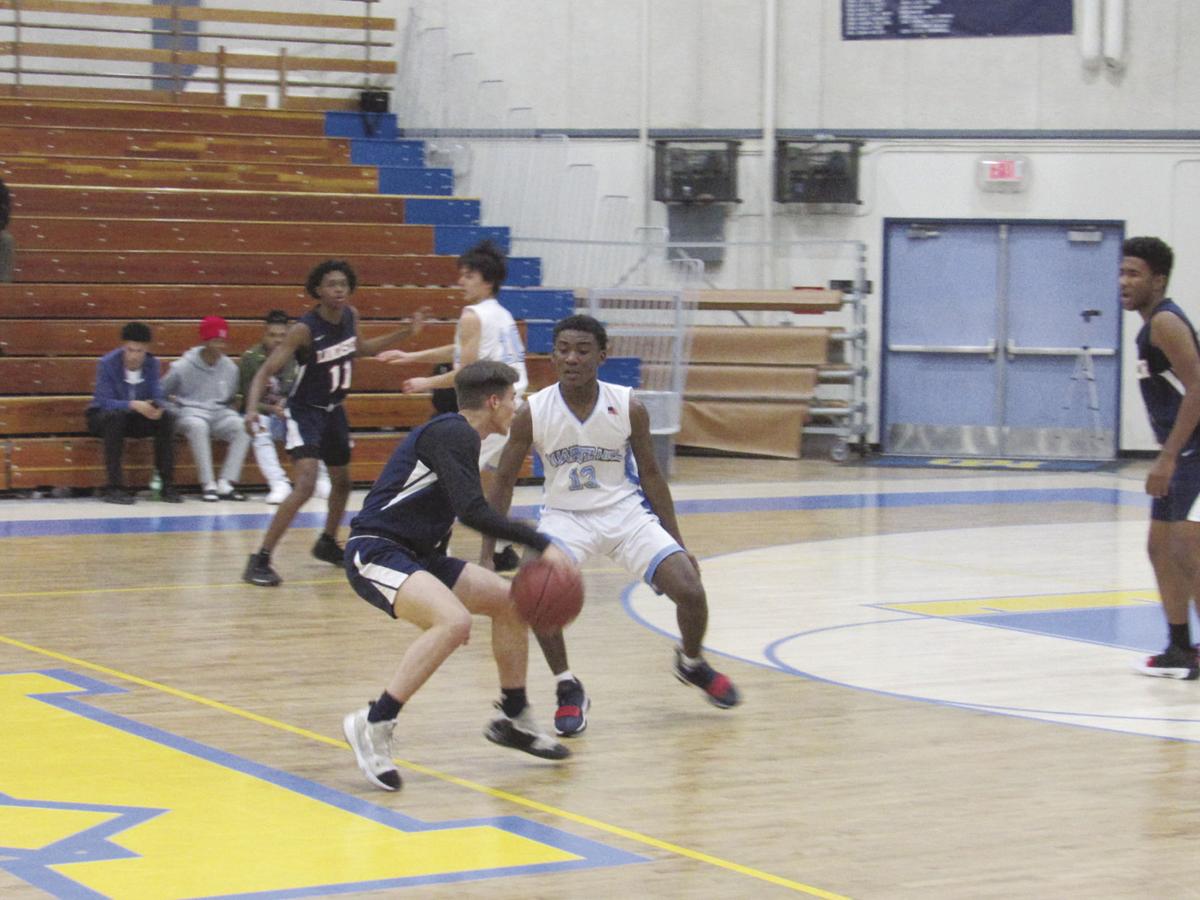 QUARTZ HILL — There is no clear cut favorite to win the Golden League title this season.

A handful of teams have a legitimate shot at capturing the prize.

And everything started Tuesday night when two of those teams faced off in the league opener between Lancaster and Quartz Hill.

What a way to start the season.

It came down to a cat and mouse game in the fourth quarter and three final 3-point attempts that failed as Lancaster escaped with a thrilling 64-61 victory at Quartz Hill High School.

“In all three of our games prior to this one we have played from behind. We wanted to jump out early and build a lead. We wanted to push the tempo,” Eagles head coach Sidney Melvin said. “I told the guys if we win the rebound battle then we have a chance. Tonight shows we can play with a lead. It was a great effort by the guys.”

Lancaster (3-1, 1-0) led by 10 points entering the fourth quarter and used the strategy of running down the shot clock by passing the ball on the perimeter to try and preserve the lead. It worked for about half the quarter, but the Rebels began to chip away after Lancaster was careless with the basketball.

Following a layup by Josiah Taylor, Quartz Hill only trailed 60-54 with 2:12 remaining in the game. A bucket by Dan Edwards and later a free throw by Edwards trimmed the lead to 63-59 with 38 seconds remaining.

“This is a very disappointing loss because we know we’re the better team. We shouldn’t be in a game like that with that type of team,” said Taylor, who finished with 13 points. “We just played bad tonight. We didn’t shoot the ball well and we missed a lot of free throws. We played way better than this in our first game. We rushed too much.”

Quartz Hill’s Nate Campus hit a putback in the key with 25 seconds remaining and the Rebels (1-1, 0-1) only trailed 64-61. Following a turnover by the Eagles, one of their 25, Quartz Hill had one final opportunity to tie the game and send it to overtime.

Taylor missed a 3-pointer and the Rebels rebounded the ball, which was kicked to Yeshua Brice, who missed another 3-pointer. Once again Quartz Hill rebounded the ball and Edwards dribbled to the corner for a final 3-point attempt, however, it was blocked by a flying Kaelin Smith with 0.2 seconds remaining and time expired giving the Eagles the victory.

Taylor had an accurate assessment of Quartz Hill’s shooting woes. The Rebels were a dismal 4-of-29 from 3-point range and only 23-of-39 from the free-throw line.

“Last year we won only three league games. So we came into this season with a chip on our shoulders. Tonight we wanted to show the rest of the league that we are coming. We have a lot more talent this year and everyone knows their role,” said Lancaster’s Malcolm Hodges, who finished with a game-high 18 points and was ferocious on the boards. “Those guys are our rivals. We wanted to come out aggressive. It feels good, but we have to learn how to finish games.”

The Eagles led 32-24 at halftime before Quartz Hill came out of the locker room on fire. The Rebels were only 1-of-14 in the first half from 3-point range but promptly netted two 3-pointers, one by Taylor and another by Alaijian Russell to open the third quarter. On its next possession Jacob Mani converted the old-fashioned 3-point play, capping a 9-0 run by the Rebels to take a 33-32 lead.

Lancaster methodically built its lead back up to 10 points later in the quarter.

“We came out very flat. This was a very winnable game for us tonight,” Quartz Hill’s Cordarius Dixon said. “We just have to keep working on our shooting. If we execute our plays and just do the simple things, there is no team (in league) that can stop us.”