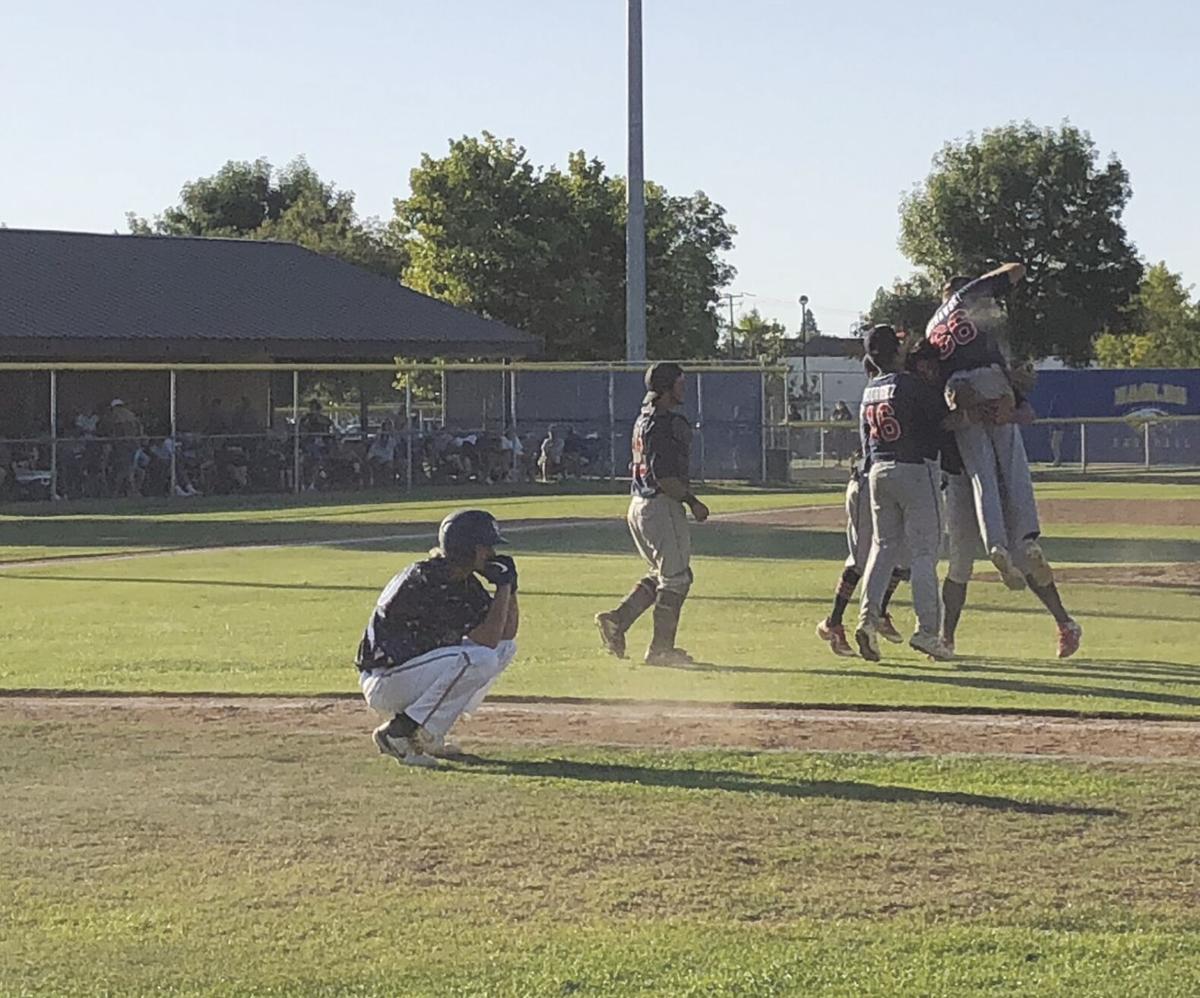 FLYING HIGH — Lancaster relief pitcher Nolan Murawski (66) is lifted by teammates after getting the last out in the Eagles’ 11-4 victory over Bakersfield Christian in the first round of the CIF Southern California Regional Championships Division 5 playoffs on Tuesday. 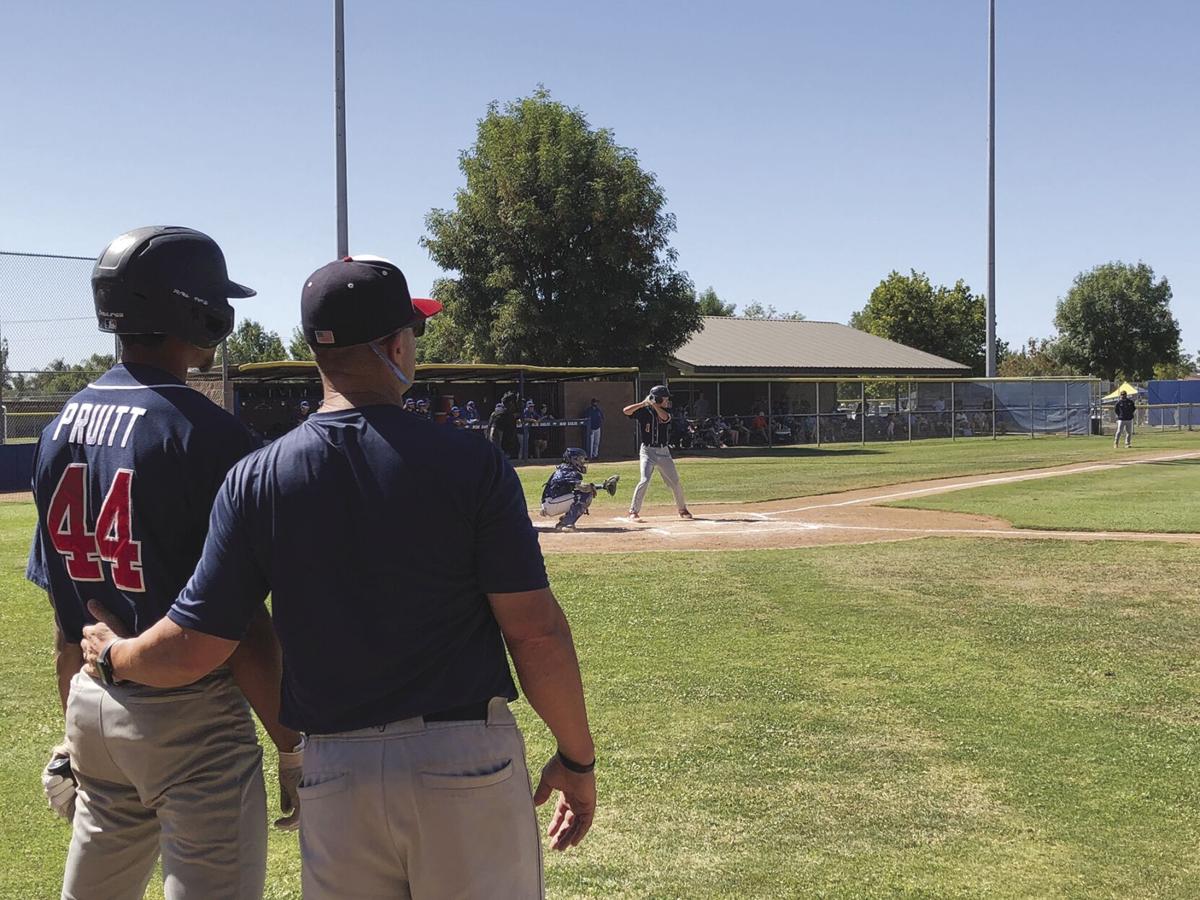 GETTING READY — Lancaster head coach David Fischenich, front right, stands in the on-deck circle with Isaiah Pruitt (44) as they watch Brian Richards (1) bat against Bakersfield Christian in the top of the first inning of their CIF Southern California Regional Championships Division 5 first-round game on Tuesday. The Eagles won 11-4. 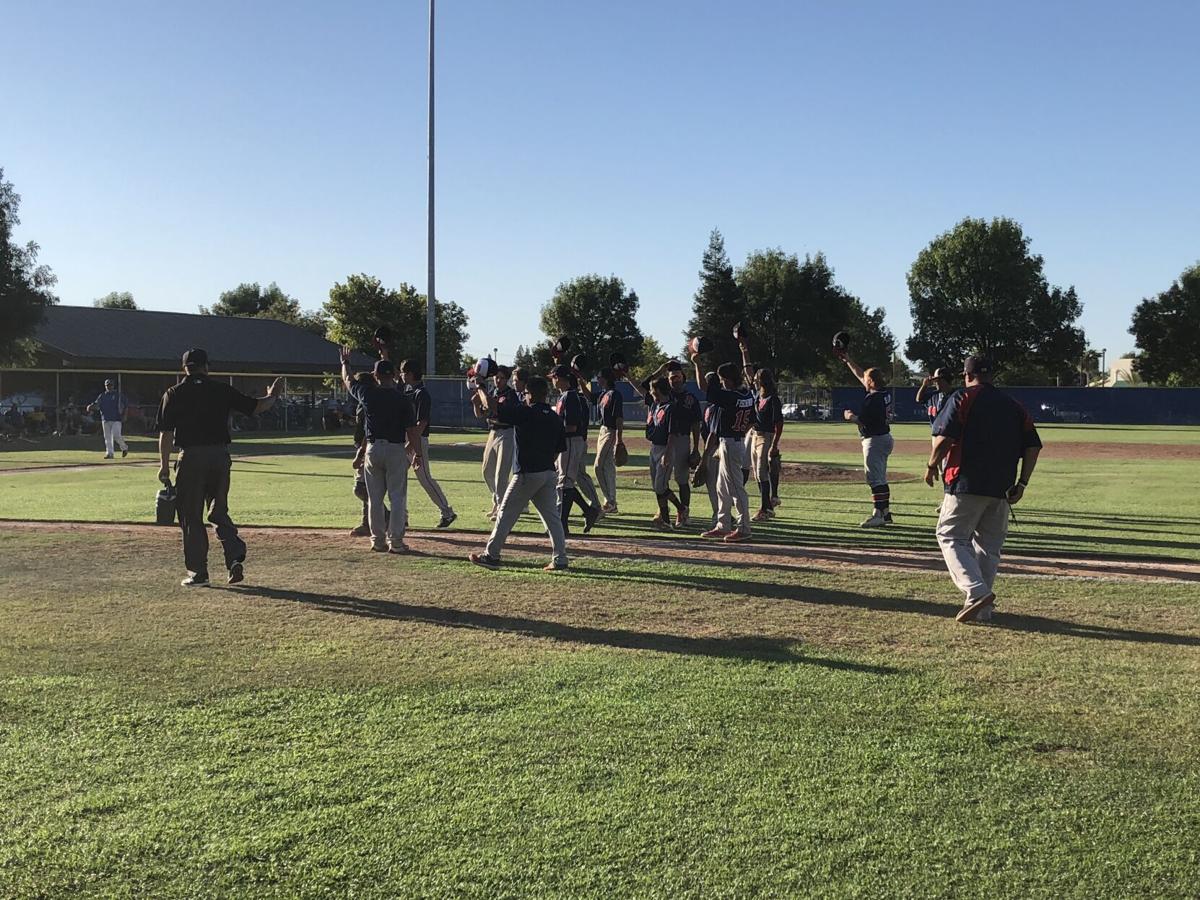 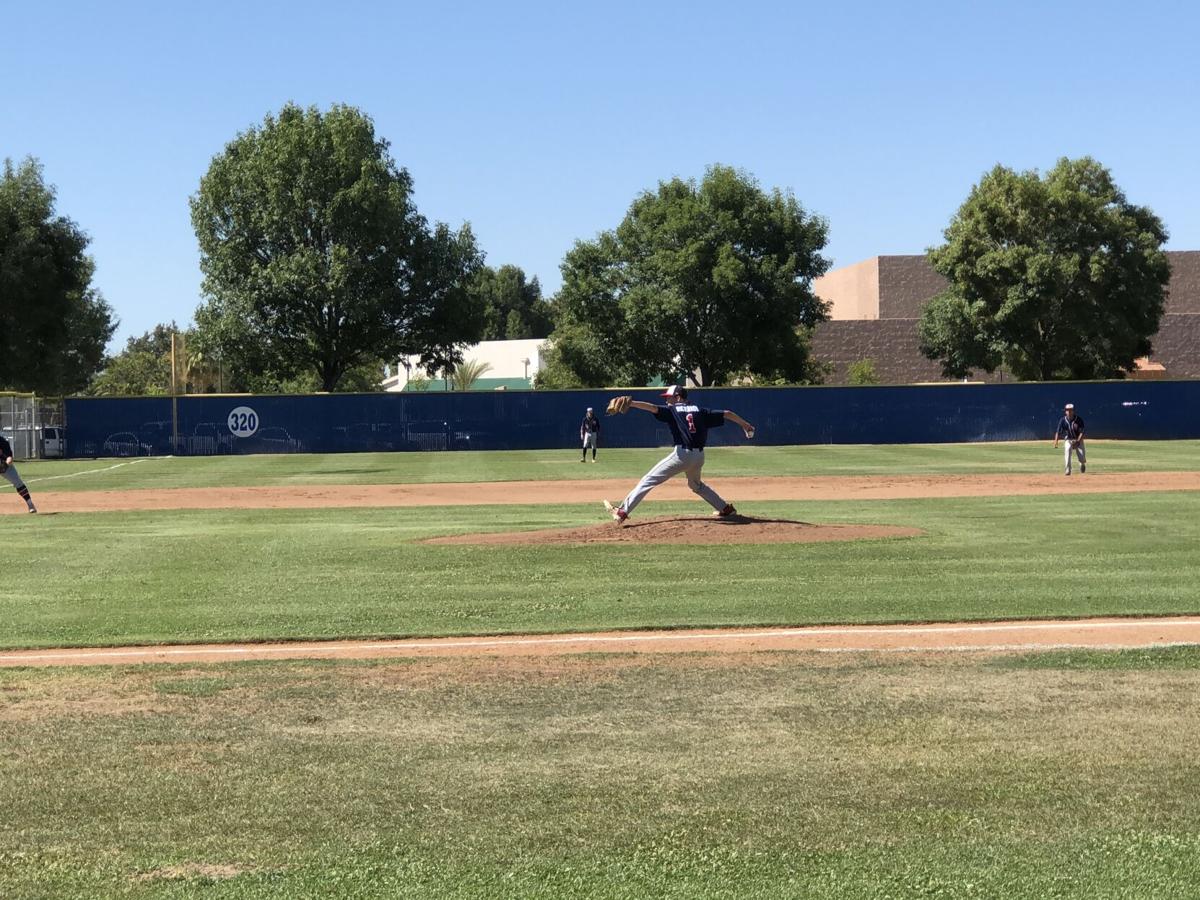 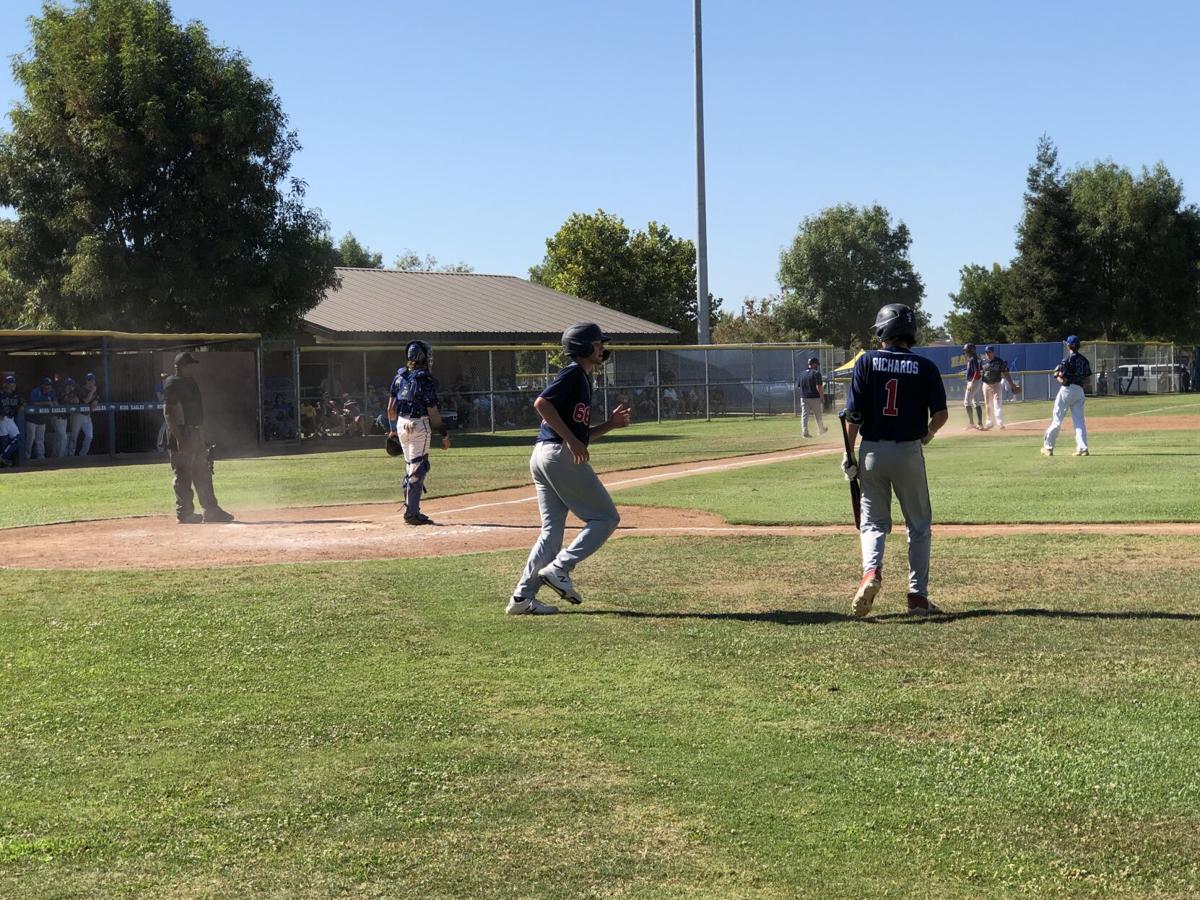 FLYING HIGH — Lancaster relief pitcher Nolan Murawski (66) is lifted by teammates after getting the last out in the Eagles’ 11-4 victory over Bakersfield Christian in the first round of the CIF Southern California Regional Championships Division 5 playoffs on Tuesday.

GETTING READY — Lancaster head coach David Fischenich, front right, stands in the on-deck circle with Isaiah Pruitt (44) as they watch Brian Richards (1) bat against Bakersfield Christian in the top of the first inning of their CIF Southern California Regional Championships Division 5 first-round game on Tuesday. The Eagles won 11-4.

BAKERSFIELD — The Lancaster baseball team knew the value of late insurance runs after a one-run victory to win a CIF-Southern Section title.

Lancaster did not have a tense victory in their first regional playoff game, scoring five runs in the top of the seventh.

The late runs propelled Lancaster to an 11-4 win at Bakersfield Christian on Tuesday in a CIF Southern California Regional Baseball Championship Division 5 first round game.

Lancaster (19-9) will play at No. 1 seed La Habra in a second-round game on Thursday.

It is the first time the CIF is holding a regional baseball playoff.

“We got there and won. I was like ‘Alright, that’s it.’ Nope, we got three more games. Now we got two more.”

Bakersfield Christian (22-9), which beat Santa Maria 14-6 in the CIF-Central Section Division 4 championship game on Friday, had the hot start on Tuesday, jumping out for two runs in the bottom of the first.

“We played amazing. I feel great,” Lancaster senior starting pitcher Brian Richards said. “Just had somewhat of a hiccup in the first and then the fourth, had a little of a hiccup then, but we played through it and played amazing.

“The first inning was probably first-inning jitters, just had to get them out quick. Then came out two and three and shut them down.”

Richards said he was able to rebound by locating his pitches.

“Just placing my fastball where I need it and throwing that curve for a strike,” Richards said.

Lancaster senior Bryce Parks led off the inning with a walk, Murawski followed with a bloop single and senior Austin Whitaker followed with an RBI single.

Leadoff batter Vinny Gonzalez drove in a run with a fielder’s choice and senior Isaiah Pruitt hit an RBI double and scored on an error.

“I though we played very well,” Lancaster junior Nolan Murawski said. “We played our Lancaster baseball. We always do. I pounded the zone. Came in there and shut down for four innings. I had my uncle Enrique over there. He was solid, cheering us on. He’s awesome. We can’t win a game without him.

“I felt that we played solid defense. I think we did pretty good.”

Lancaster added two runs in the fourth, as Whitaker walked, Gonzalez doubled and Richards drove both of them in with a bloop double to right.

“These last seven games, probably, we do the three important things we’ve done our best all year: we play great defense, pitch to contact and get hitter’s counts and hit baseballs hard,” Lancaster coach David Fischenich said. “They’re playing the best baseball of the year at the right time.

“We knew they had some arms that could throw hard. We knew we had to get in hitter’s counts and get pitches we could really drive and we did that. The guys go up to the plate with an approach. This whole year is kind of building up to this moment and they’re playing the best. They have amazing approaches at the plate. The way they go about their business at the plate showed today with 11 runs.”

Bakersfield Christian scored two runs in the bottom of the fourth, after loading the bases with no outs, when No. 9 batter Kyle Guinn hit a two-run double.

Murawski entered the game in relief and got three outs, including striking out the final batter.

Lancaster scored five runs in the seventh on just one hit, but four walks and one costly error.

Senior pinch hitter Jayden Emenheiser hit a comebacker to the Bakersfield Christian pitcher, who threw home with the bases loaded and one out, but the pitcher sailed the throw high enough to allow two runs to score.

Murawski followed with a two-run triple to center field and he scored on a wild pitch.

“No stress,” Murawski said pitching after the five-run seventh inning. “I’m out there, throw strikes in the middle of the zone. My defense has got me. If they score a run, it doesn’t matter.”

Murawski retired the side in order in the seventh. Murawski pitched four scoreless innings, giving up no hits and two walks, while striking out three.

“It was great. A lot of pressure left off our back,” said Richards, who gave up four runs in three innings on four hits and four walks, striking out four. “It’s just extra, because we know we can go all the way with this one too. So we’ll go try to win this one too.”

Lancaster outhit Bakersfield Christian 8-4, as Whitaker and Murawski both had two hits for Lancaster.

Lancaster is the No 5 seed, while Bakersfield Christian is the No. 4 seed.

La Habra, which had a bye in the first round, won the CIF-Southern Section Division 6 championship with an 8-3 win over Elsinore on Saturday at Cal State Fullerton.