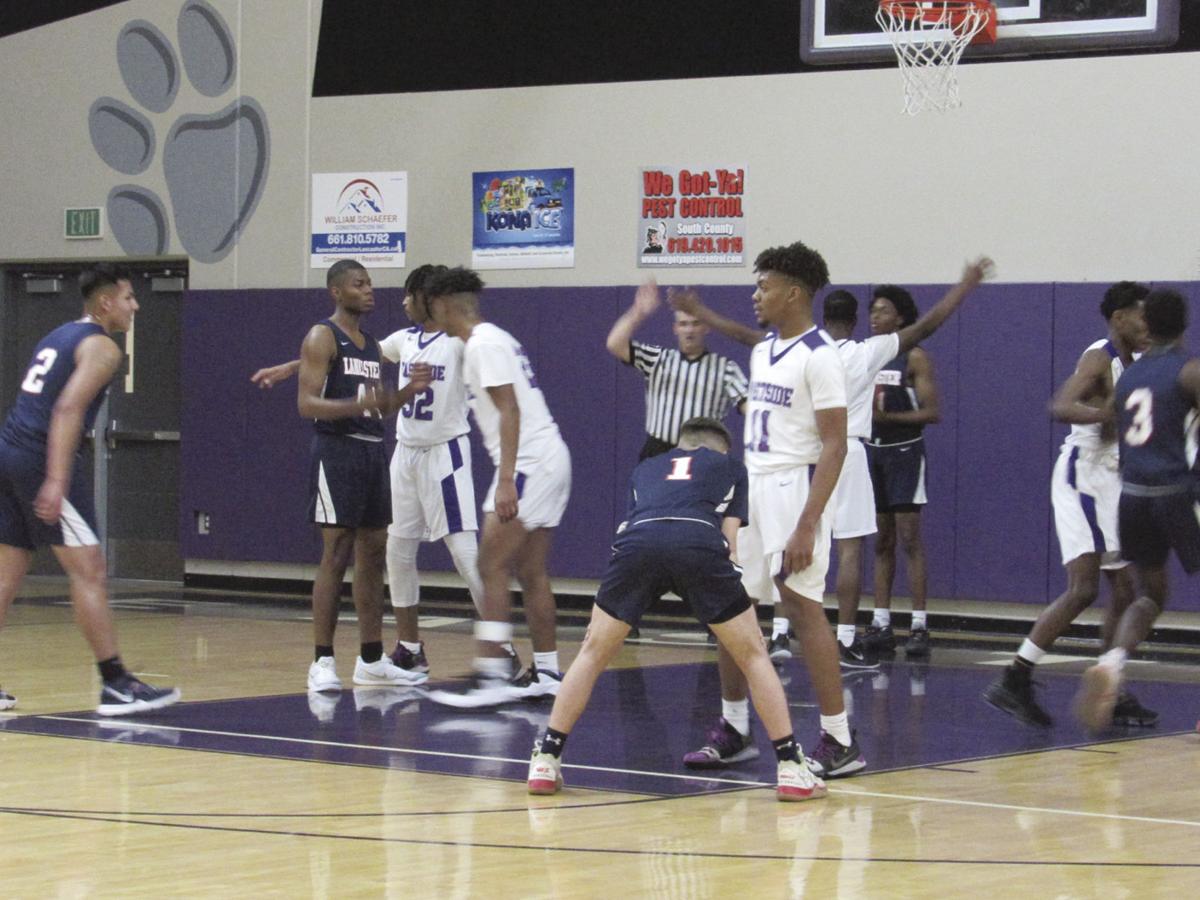 BATTLE TESTED —The Lancaster and Eastside boys basketball teams prepare for the ball to be in-bounded by the Eagles during a Golden League game at Eastside High on Tuesday. Lancaster won 66-63 to remain in first place in the league standings. 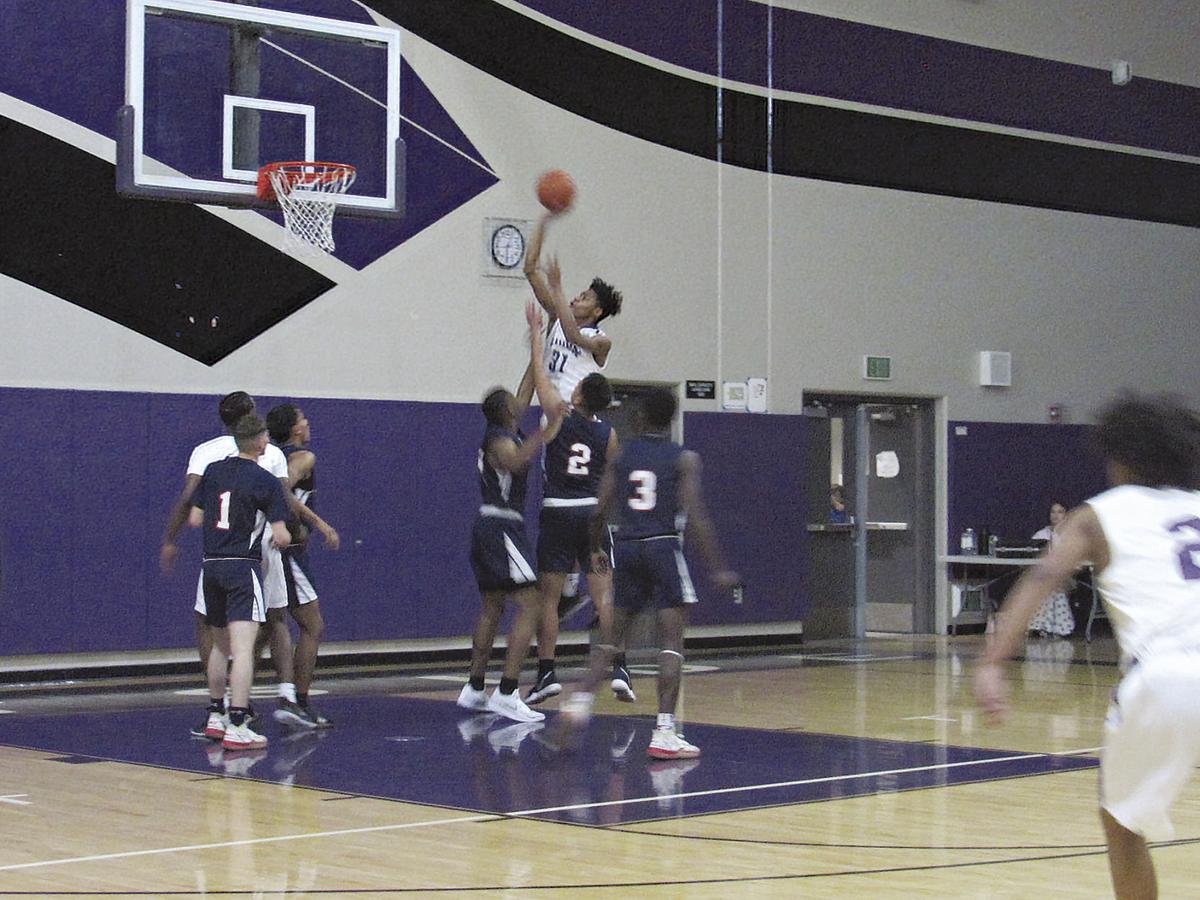 BATTLE TESTED —The Lancaster and Eastside boys basketball teams prepare for the ball to be in-bounded by the Eagles during a Golden League game at Eastside High on Tuesday. Lancaster won 66-63 to remain in first place in the league standings.

LANCASTER — With 4:54 remaining in the first quarter the lights inside the Eastside Gymnasium went out, literally.

At the end of the game the Lancaster boys basketball team tried to give the game away against Eastside.

But in the end the Eagles turned out the lights on the Lions with a thrilling 66-63 victory, Tuesday night at Eastside High School.

With the victory, Lancaster (10-4, 6-1) remained atop the Golden League standings with a ½-game lead over Quartz Hill (5-1) and 1½ games over Eastside. The Eagles will host Quartz Hill on Friday night and the Rebels still have a critical makeup game against the Lions. Highland and Knight are still in the hunt at 4-3.

Things got really interesting in the fourth quarter.

Lancaster’s Dylan Bryant hit a driving layup against Eastside’s Nathan Anderson and was fouled. He failed to convert the 3-point play, but the Eagles still held a 56-47 lead with less than four minutes remaining. On Lancaster’s ensuing possession, two free throws by Jordan Roach gave Lancaster a seemingly comfortable 58-47 lead with 2:59 left.

An Anderson putback sliced the lead to 59-52 with 97 seconds remaining.

As Eagles head coach Sidney Melvin wanted his team to run time off the clock, Roach drove to the rim early in the shot clock and missed. Roach and the ball fell out of bounds and it was awarded to the Lions (6-8).

“You have to be disciplined. We wanted to milk the clock and we have to execute. There at the end we got lackadaisical and we weren’t focused,” Melvin said. “We have to know the game’s not over until it’s over. It’s a grind the whole game. Give them credit they fought back.”

A layup by James Scott trimmed the lead to 61-54. Seconds later Aubhrey Pender netted a 3-pointer, which was followed by a steal and layup by Anderson and Lancaster’s lead was decimated to 62-59 with 25.4 seconds left.

“We need to work on being more poised and calm, but we didn’t give up. We were hungrier than they were,” said Roach, who scored exactly half of Lancaster’s 66 points, finishing with 33, including 13-of-18 from the free-throw line. “We kept fighting. When we were losing early in the game we asked ourselves how we’re losing to this team. This team is senior stacked so we’re trying to make a point in league.”

After Roach was fouled as his team was clinging to a 3-point lead, he made 1-of-2 free throws to inflate the lead to 63-59. The partisan Eastside crowd really rose to its feet after Dominic Clayton drained a 3-pointer and was fouled by Bryant, who was trying to contest the shot. Clayton converted the uncommon 4-point play and the Lions crawled all the way back to tie the score, 63-63.

“We played hard as a team, but at the end of the day the game turned into a mental game. There was no communication with us the first six minutes of the fourth quarter and that’s how they built their lead,” Eastside head coach Cisco Muñoz said. “We went away from our defense. We have to learn to follow the game plan from beginning to end. We have to put this one behind us because there are more games to play. We’ll learn from this and this will be a wakeup call for us.”

With the momentum and crowd on their side and the score tied, Roach was fouled by Pender following the inbounds pass. He made both free throws to give Lancaster a 65-63 lead with 14.6 seconds. The Lions’ Scott Blankenship missed a 3-pointer in the corner and Lancaster’s Eric Rodriguez was fouled with six seconds left.

Rodriguez made 1-of-2 to give the Eagles a 3-point lead, but the Lions still had one more chance. Eastside got the ball to Clayton who got a good look at the basket for three, but the ball hit the front of the rim to seal the victory for the Eagles.

“We started strong and we came out with a lot of energy. But we didn’t keep the same intensity,” said Anderson, who led his team with 16 points. “After we got down in the fourth we got our energy back. We could have won this game. This could have all been avoided if our energy remained.”