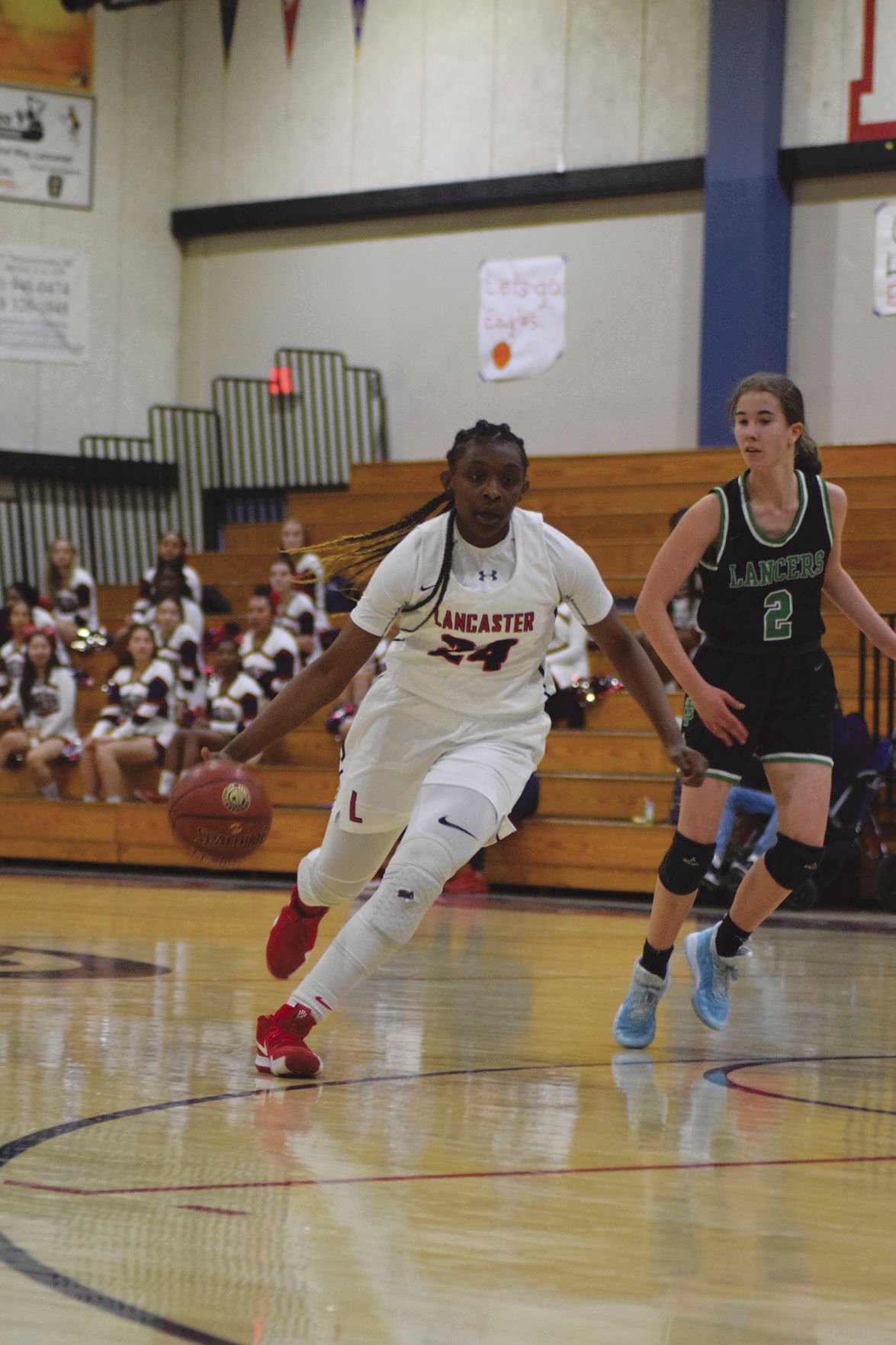 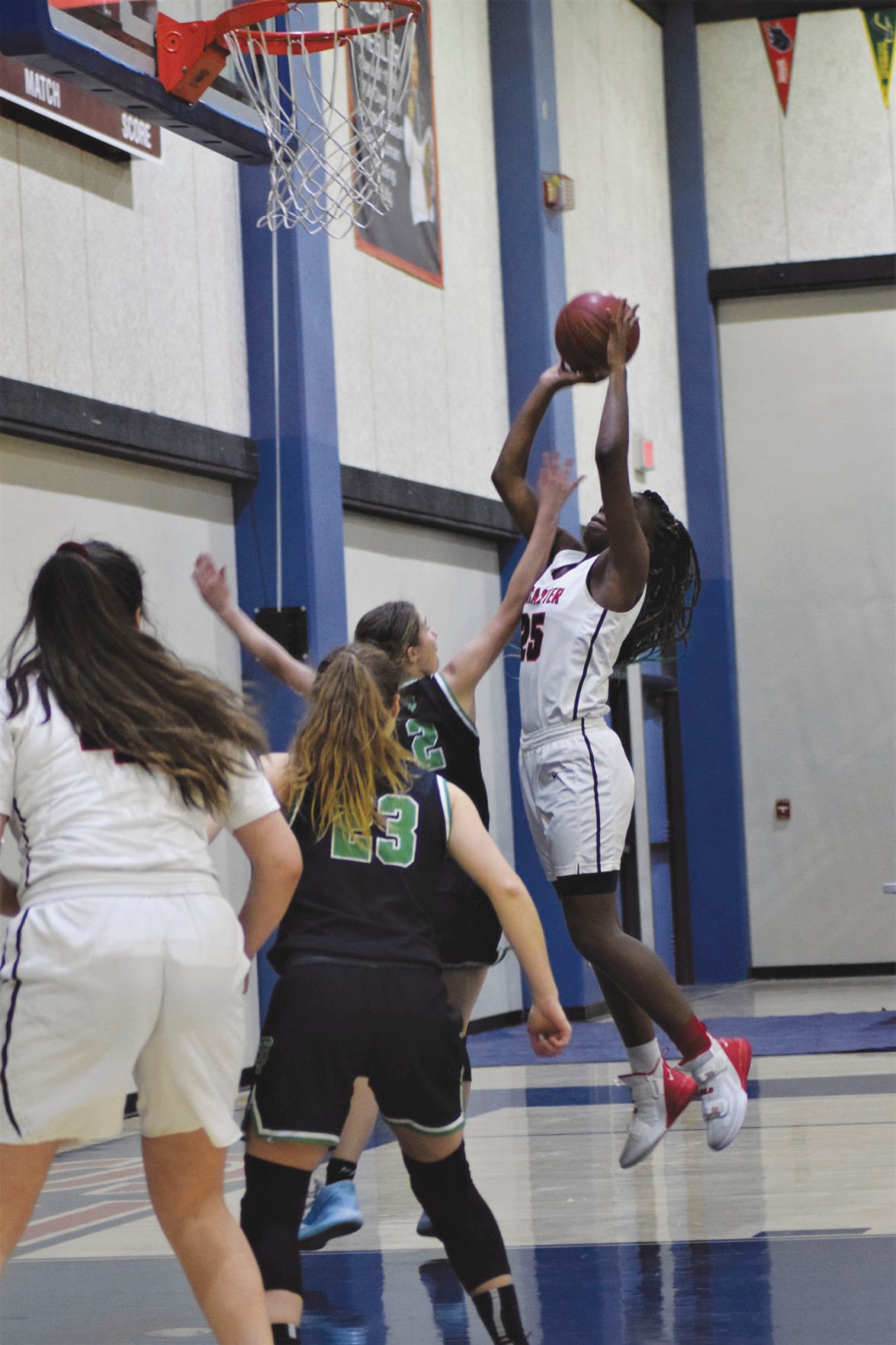 GOING UP —Lancaster’s Rayshanti McNeal-Price goes up for a basket against Thousand Oaks on Thursday. The Eagles won their first-round playoff game 59-52.

GOING UP —Lancaster’s Rayshanti McNeal-Price goes up for a basket against Thousand Oaks on Thursday. The Eagles won their first-round playoff game 59-52.

LANCASTER — In a game that matched dominating rebounding against pressure defense, the rebounding edge proved the difference as the Lancaster High School girls basketball team held off visiting Thousand Oaks, 59-52, Thursday night in the opening round of the CIF-Southern Section Division 3AA playoffs.

The victory moves the Eagles (18-7) into a second-round match at home against San Juan Hills (22-5), which defeated Chaparral 59-49 on Thursday. Thousand Oaks ends its season at 18-10.

Lancaster had quite a bit of difficulty with the visiting Lancers’ pressure in the early going, allowing the visitors to jump out to a 14-5 lead. But layups by junior forward Rayshanti McNeal-Price and senior guard Brooklyn Curry and a rebound basket by McNeal-Price cut the margin to 14-11 at the end of the first quarter.

Thousand Oaks opened the lead up to five points early in the second period, but a three-point shot by junior guard Kristen Lopez and a layup by junior forward Vanessa Fletes tied the score at 18-all. The visitors then retook the lead at 21-18 before the Eagles scored the final nine points of the period, seven by Lopez, for a 27-21 halftime edge.

The third quarter was all Lancaster as the Eagles used a series of layups (three by McNeal-Price and four by sophomore guard Mea Madison) to open up a 41-29 advantage just before the end of the period.

That lead grew to 13 at 46-33 at the start of the final period, but the Lancers used more pressure defense, especially on inbounds passes, and some key three-point shooting to fuel a 10-0 run, narrowing the score to 46-43 with just under four minutes to play, and pulled to within one at 49-48 with about 2:30 left.

However, a rebound basket by McNeal-Price and a free throw by Fletes pushed the lead back to four, and layups by Fletes and Curry followed by a 3-pointer by Lopez kept the visitors at bay down the stretch as the Lancers’ shooting went ice cold.

McNeal-Price led a balanced Lancaster attack with 16 points, while Lopez contributed 13 and Madison and Fletes added 11 each.

“I’m so proud of the way we played as a team,” Eagles head coach Jessica Morrison said. “We always stress that every play matters.

“I’m really glad it worked out for the team.”