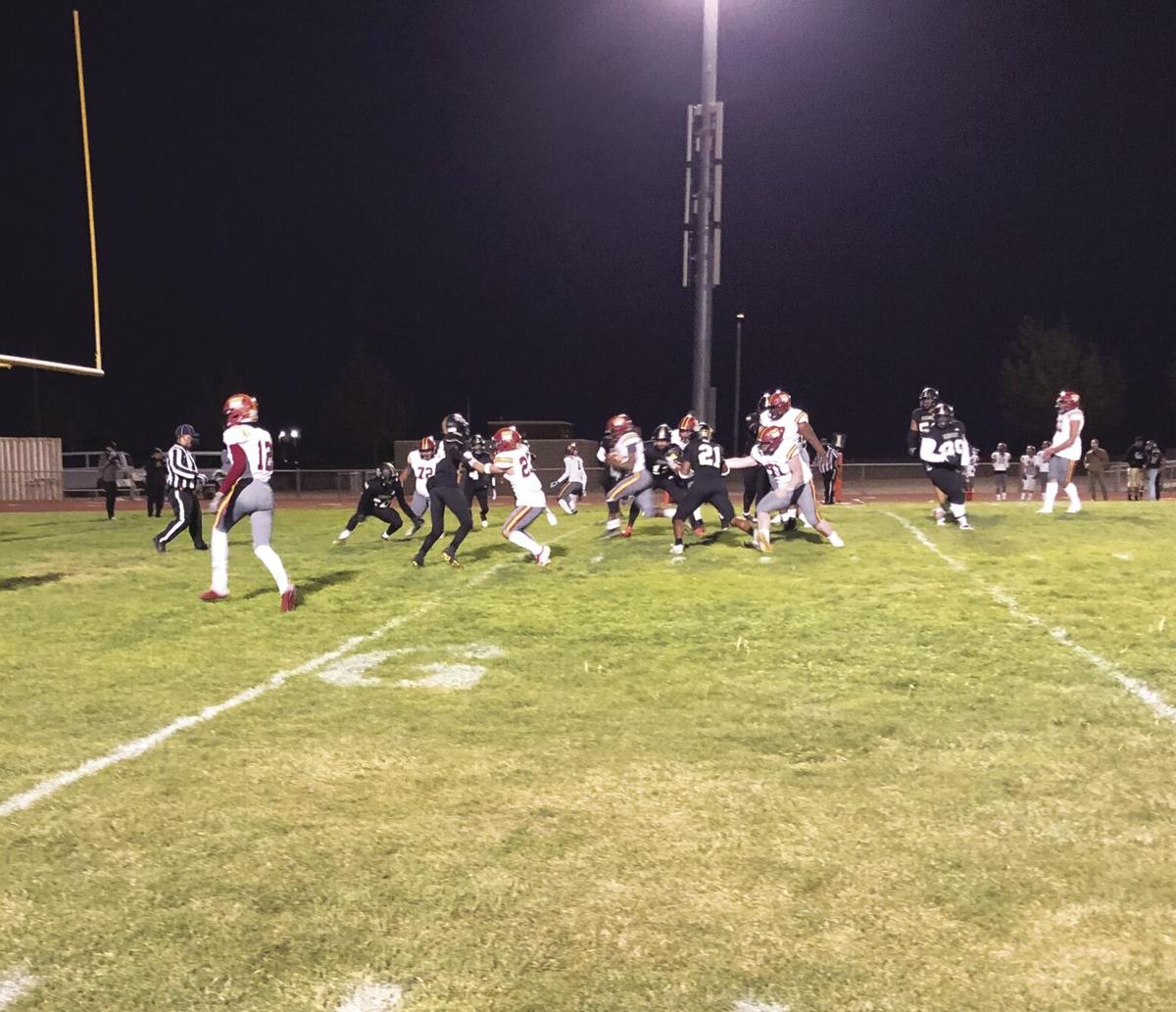 SCORE — Highland sophomore running back Brandon Johnson scores on a run in the second quarter in a 36-15 win at Knight High on Friday night. Johnson ran for 153 yards and four touchdowns as the Bulldogs remain undefeated in the Golden League. 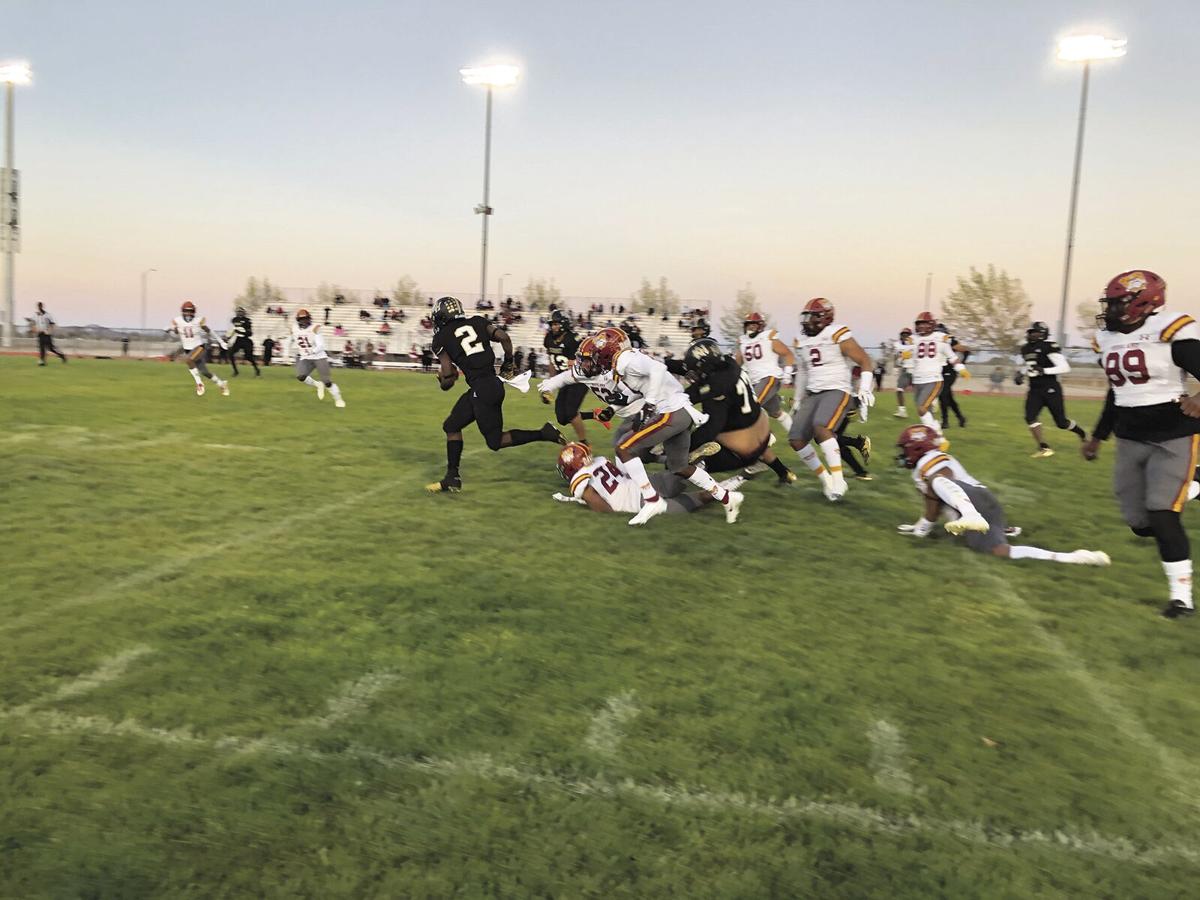 RUNNING AWAY — Knight senior running back Bryan Massengale breaks away from Highland defenders on a 15-yard run early in the first half on Friday night during the Bulldogs’ Golden League victory. Massengale rushed for 54 yards and one touchdown.

SCORE — Highland sophomore running back Brandon Johnson scores on a run in the second quarter in a 36-15 win at Knight High on Friday night. Johnson ran for 153 yards and four touchdowns as the Bulldogs remain undefeated in the Golden League.

RUNNING AWAY — Knight senior running back Bryan Massengale breaks away from Highland defenders on a 15-yard run early in the first half on Friday night during the Bulldogs’ Golden League victory. Massengale rushed for 54 yards and one touchdown.

PALMDALE — The Highland football team showed how depth is one of its strengths in a battle of the only two remaining undefeated teams in the Golden League on Friday night.

The Bulldogs weathered a slow start, rebounding with a strong defensive effort and a pounding running game to score a 36-15 victory at Knight High.

Highland (4-0) is the only undefeated team left in the Golden League with one game remaining in the regular season. Knight falls to 3-1.

“I think it was because we weren’t as prepared as we were, but I say the energy wasn’t there at the start. We were warming up, the energy really wasn’t there. They scored and we had a big old talk on the sideline. We came back and whooped them. It was a great comeback.”

Johnson helped tie the game with a 3-yard touchdown run early in the second quarter, on the Bulldogs’ fourth possession of the game.

Highland had a disastrous start, on its second possession, Knight senior Iverson Daniels intercepted a pass and returned it 75 yards for a touchdown and early 7-0 Knight lead.

“Today, we came out pretty slow,” said Highland senior defensive lineman Esai Martinez, who had a sack. “We came out slow, but we obviously got the hang of it. I think we did well overall, bouncing back against Pete Knight. Pete Knight is a pretty good team. They’re 3-0. We’re 3-0. We can come out and show them how we play.”

Highland scored three touchdowns in the second quarter to take a 22-7 lead at halftime and four unanswered touchdowns before the Hawks scored early in the fourth quarter.

“My line did an amazing job today,” Johnson said. “I want to give them thanks. I wouldn’t be able to do anything without my line. For me, last week I didn’t have a really good game, so I wanted to come and actually prove what I actually can do on the field for the coaches and I’m pretty sure I did that today.”

Johnson scored on runs of 12 and 5 yards in the second quarter.

Meanwhile the Highland defense was smothering the Knight offense.

The Hawks were held to 38 yards in total offense in the first half, most coming on a 42-yard pass by Knight junior Day’quan Williams on the Hawks final drive in the half.

“I thought it was a very physical game,” Highland coach Richard Lear said. “I thought defensively we were playing lights out until late in the game. I subbed a couple of guys. When we do sub like that, those guys got to understand we have the same expectations as we do when we have our starters in. They have to run what we’re telling them what to run and run it correctly so we can avoid giving up a late score like that. Offense took a while to get going. We finally found our niche, found our groove and started putting some points on the board.”

Smith intercepted a Knight pass on the opening drive on the third quarter.

Highland scored on the first drive of the fourth quarter, when quarterback Daryus Warren threw a 13-yard touchdown pass to senior Reece Robinson, giving the Bulldogs a 28-7 lead.

Knight was able to answer on the ensuing drive, when senior Bryan Massengale scored on a 30-yard run. Massengale led the Hawks with 54 yards rushing on 15 carries.

“I think they showed some grit, some good toughness,” Knight coach Adam Fabela said. “Our biggest thing this week was playing through adversity, anticipating a challenge. Obviously they are a great program. Great team and a lot of great coaches over there. We knew it was going to be tough. I’m just proud of the way they fought, early on especially.

“I think we got tired and we got gassed in the third and fourth quarter. They’re built to wear us down. I’ve got to (do) a better job at making sure we’re conditioned in practice. That’s on me, so I’ll take that. I think they showed a lot of heart and I think they found out what it takes to play a four-quarter football game against a top Southern California football team.”

“Coming from an injury that I had last year, coming on to starting varsity to going undefeated really means a lot,” Johnson said. “It means that we still can carry the legacy of Highland High School from last year, from 2019. I feel that we’ve done a pretty good job of that.”

Highland sophomore running back Saheed Free finished with 94 yards rushing on 13 carries before leaving with an injury in the fourth quarter.

“We did get some guys banged up, but we’re pretty deep,” Lear said. “Our philosophy is next up. The next guy has got to go in and produce. We expect them to continue to move the ball on offense when we start subbing or when we get backups in. Defensively, we’ve got to do our assignments and keep them out of the end zone.”

Highland will host Eastside on Friday and Knight plays at Antelope Valley.