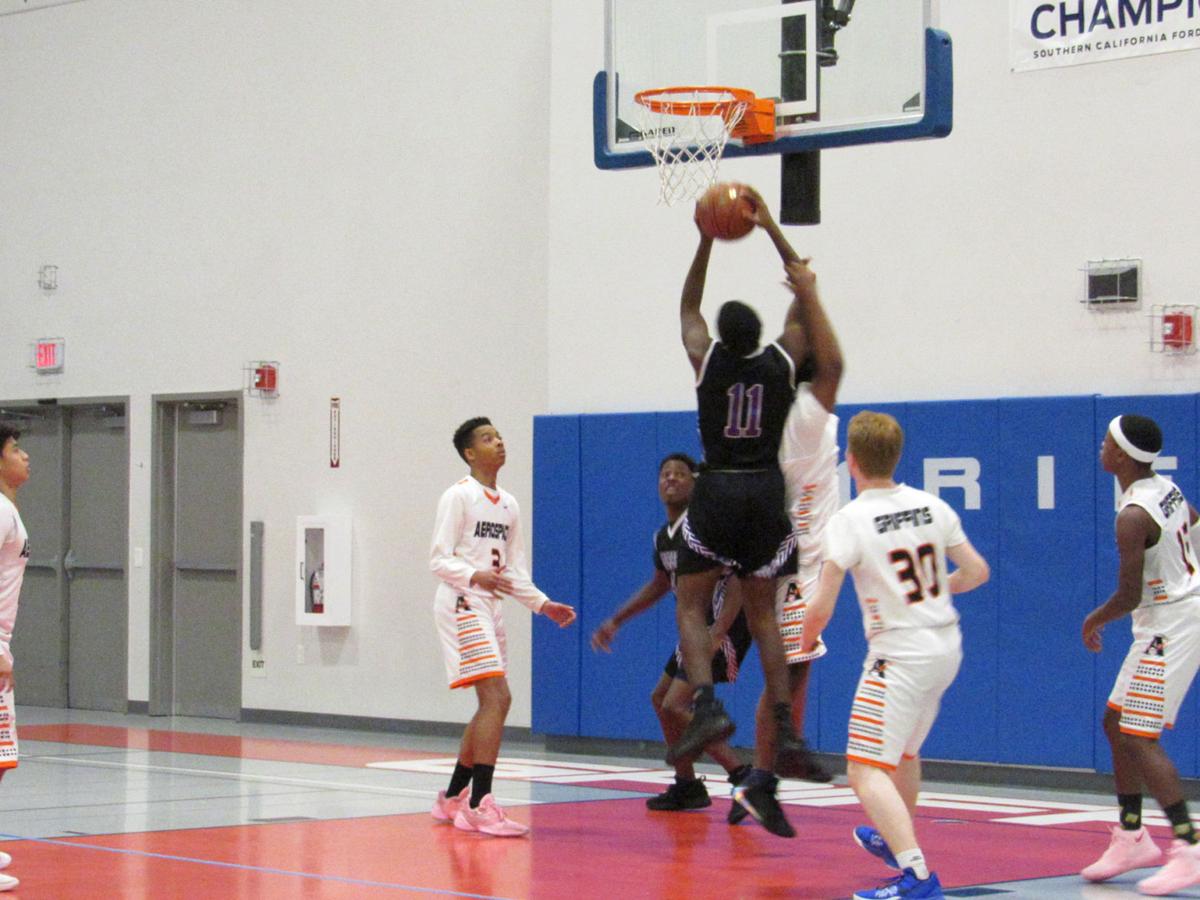 on the boards — Desert’s Emil Rogers (11) grabs one of his 20 rebounds for the Desert boys basketball team in a nonleague game at The Palmdale Aerospace Academy on Wednesday night. Desert won the game 53-46 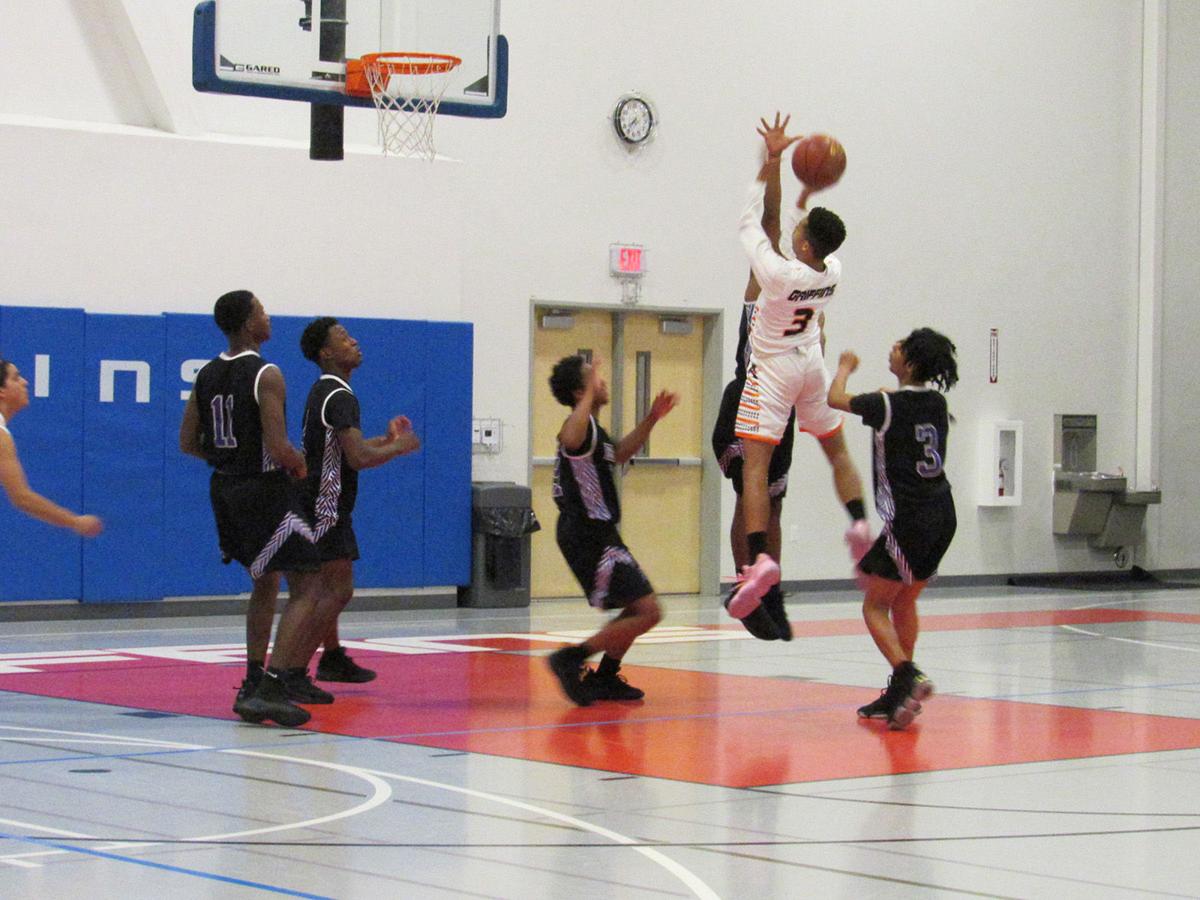 jumper — Palmdale Aerospace senior Isaiah Enyard (3) goes up for a shot in a game against Desert on Wednesday.

on the boards — Desert’s Emil Rogers (11) grabs one of his 20 rebounds for the Desert boys basketball team in a nonleague game at The Palmdale Aerospace Academy on Wednesday night. Desert won the game 53-46

jumper — Palmdale Aerospace senior Isaiah Enyard (3) goes up for a shot in a game against Desert on Wednesday.

PALMDALE — The Palmdale Aerospace Academy boys basketball head coach Keith Bennett said his team has had mental lapses in many of their games this season.

This time it was the second quarter when Bennett’s Griffins hosted visiting Desert.

The Scorpions outscored TPAA by eight points in the second quarter and maintained that lead throughout and staved off a late Griffins rally to hold on to a 53-46 victory in a non-league game Wednesday night at The Palmdale Aerospace Academy High School.

“We’ve had a lot of games like this. We’ve lost our minds in different quarters. Against Rosamond it was the fourth quarter and tonight it was the second quarter,” Bennett said. “They go off and try to do their own thing. They work hard, but we’re undersized and everybody has to be on the same page. We need to follow the plan and we have to stay together for 32 minutes.”

Emil Rogers scored four consecutive points for Desert (2-1) in the fourth quarter to help extend the lead to 47-36. Following a timeout by Bennett, the Griffins rallied and Isaiah Enyard scored a bucket followed by Anthony Carrillo’s third 3-pointer of the game to cut Desert’s lead to 47-43 with 3:06 remaining.

TPAA (2-6) inched closer later in the quarter following a conventional 3-point play by Angel Gonzalez as it only trailed 48-46 with 55 seconds remaining. The Scorpions’ Marquis Morris, who finished with a game-high 18 points including four 3-pointers, netted two free throws to distance them to a 51-46 lead with 33.5 seconds remaining.

“It was a pretty good game. I thought we played well as a team. We took smarter shots tonight and we talked to each other on the court,” said Morris who connected on two 3-pointers in each of the first two quarters. “We were able to hype each other up. This shows us what we can do if we work as a team. We could have minimized our turnovers, but I’m pleased with our effort.”

Two missed 3-point attempts by the Griffins and two free throws by Phillip Carter sealed the game for the Scorpions. Desert was 16-of-26 from the free throw line.

“We started off in man (defense), but once we switched to zone it slowed them down and we were able to get up and down the court. The team played great tonight,” Desert head coach Phil Pleasant said. “We controlled the game a little bit more and we played under control. I thought we started off slow, but they played with energy. The guys really wanted to win tonight.”

The game was tied 12-12 after one and both teams traded 3-pointers, two by Morris and one each from the Griffins’ Carrillo and David Salvidar. However, the Scorpions took the lead and held it the rest of the game following a putback by Javier Elliott to give his team a 21-20 lead.

Desert closed the half on a 9-2 run and Rogers closed the half with a bucket as time expired following an out of bounds play. The Scorpions led 30-22 at halftime. Rogers played out of his mind as he finished with a game-high 20 rebounds to complement his 14 points.

“We played solid in the first quarter, but we broke down in the second quarter. We just played bad offense and bad defense. It’s very disappointing,” said Carrillo, who led his team with 17 points. “We were up (early on) and we let it slip away. We just have to continue to keep working harder. We need to stay locked in the whole time. We have to roll on all four cylinders.”

The Scorpions led 36-29 before Enyard hit a floater on the baseline to trim the lead to 36-31. On TPAA’s ensuing possession Enyard hit a 3-pointer in the quarter to pull the Griffins closer 36-34 with 3:52 remaining.