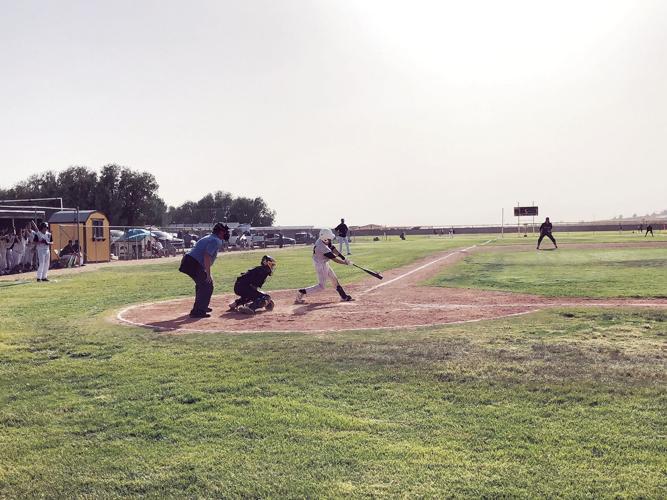 Boron sophomore Dylan Kindschi hits a two-run double in the sixth inning to drive in the go-ahead runs in a 13-7 High Desert League win over Rosamond on Tuesday. 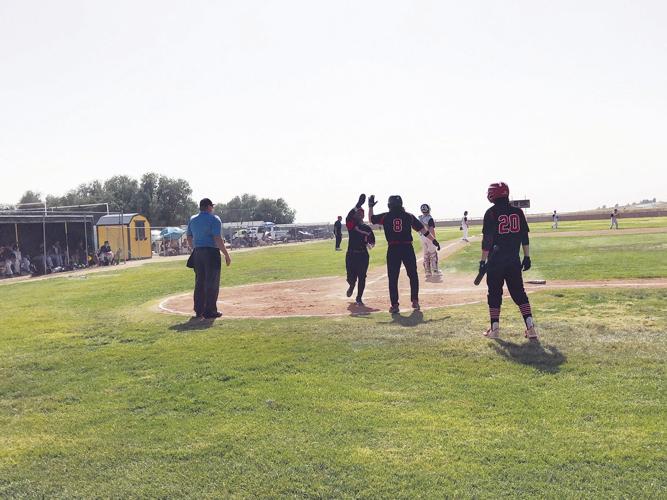 Rosamond senior Aaron Wilson (6) is congratulated by senior Aidan Rakisits (8) after both scored on a two-run double by Adrian Cruz in the third inning of a High Desert League game at Boron High on Tuesday.

Boron sophomore Dylan Kindschi hits a two-run double in the sixth inning to drive in the go-ahead runs in a 13-7 High Desert League win over Rosamond on Tuesday.

Rosamond senior Aaron Wilson (6) is congratulated by senior Aidan Rakisits (8) after both scored on a two-run double by Adrian Cruz in the third inning of a High Desert League game at Boron High on Tuesday.

BORON — The Boron baseball team rallied late in the second consecutive game against Rosamond, only on Tuesday the rally did not fall short.

The Bobcats trailed early in the High Desert League game against the Roadrunners, but erupted for nine runs in the bottom of the fifth inning to score a 13-7 victory over Rosamond at Boron High School.

“It feels great,” Boron senior Michael Garcia said. “After losing to them last time, being able to bounce back from a deficit, makes us feel on top of the world.

“I feel that once we got the bats rolling early, it kind of started the momentum. As soon as our pitchers locked in, we pretty much had it under control.”

The two teams are now tied for third place in the High Desert League.

“It feels great,” Boron senior Jayden Singer said. “The first game, we came to them late and we couldn’t come back as much as we could have, but today we came back and I was so excited.

“Honestly I think it was the dugout finally getting the energy to boost our players up instead of them being quiet and sitting down. We held out throughout the game.”

Boron trailed 7-2 entering the fifth inning, but scored nine runs on seven hits and two errors, including a three-run home run by Singer.

Sophomore Dylan Kindschi later hit a two-run double in the inning. Rosamond left fielder Adrian Cruz appeared to initially catch the ball, but appeared to drop it when he hit the outfield fence. Singer added an RBI single, as the Bobcats sent 12 batters to the plate.

“It was all the people, even the kids who don’t play very much,” said Singer, a four-year varsity player. “It was all of them, just helping out. It was awesome.”

The Bobcats added two runs in the sixth, as junior Milloy Martz reached on a bloop infield single and scored on three wild pitches and Garcia added an RBI single.

Garcia and senior Braydon Job both finished 3-for-4 for the Bobcats and Singer was 2-for-3.

“It means we have all the momentum in the world,” Garcia said. “It would have been nice to have it sooner, but at the same time it feels great just to be able to come out on top.”

“Little Wolfe, he came in in the beginning and struggled a little bit, but he battled,” Boron coach Austin Russell said. “He got out of a little spot there and carried us into the fifth inning and Aiden came in and closed it out. Phenomenal job. We had two home runs hit today. Two shots. You can’t ask for anymore from these guys from what they’ve done.”

Boron sophomore starting pitcher Braeden Wolfe settled down after giving up four runs in the top of the first inning on one hit — a two-run home run by Rosamond senior Aaron Wilson — and two walks, a hit batter and an error.

The Roadrunners also scored three runs in the third. Rosamond junior Daniel Flores led off with a double and scored on a wild pitch and sophomore Adrian Cruz hit a two-run double. Cruz was 2-for-3, the only Rosamond batter with multiple hits, but senior Richard Rivas and Wilson both drew two walks apiece.

Boron junior Aiden Day threw 2.1 scoreless innings in relief, striking out five and giving up no hits, two walks and one hit batter.

“It felt great. It’s my first time clicking on the mound since I came back from an injury,” Day said. “To come out on top is a great success. We came in with a lot of energy and we kept our energy up. We all stayed focused. We didn’t take anything lightly. This was a big game for us. We took it serious and we got the job done.

“We definitely started off slow, but we came back. We tend to figure things out in the later innings and today we made that success and it paid off greatly.”

Boron began chipping away at the deficit in the second inning, as Garcia hit a leadoff home run.

Singer was hit by a pitch with one out in the third inning and scored on a triple by Job, who finished with a single, a double and a triple with two runs scored.

“These guys just don’t quit,” Russell said. “They don’t give up until the last pitches. They just don’t. That’s just the way Boron boys have always been.”

Rosamond freshman starting pitcher Gavin Ament was hit in the stomach with a sharply hit line drive in the fourth inning.

Although he initially went down in pain on the play, he recovered to throw out Garcia and retire the next two batters to retire the side in order, he did not return to the mound in the fifth inning, when Boron scored nine runs.

Ament struck out five in four innings, giving up two runs on three hits and one hit batter and no walks.

“The fact that our starting pitcher, he couldn’t stay and he was doing great,” Rosamond coach Charles Wallis said. “Obviously everything changed after that. But we say it all the time, Boron never rolls over. They always play hard. Today they finished on top, but they are always like that. They always play us hard. We’ve never had an easy game with Boron. They hit the ball. They hit the ball well.”

Russell said the Bobcats were playing without two of their starters, the second and fourth batters in the lineup.

“It’s huge. This is huge. We are missing two of our big, big players,” Russell said. “COVID has struck our team. Kind of put a hitch in our giddyup, but I didn’t doubt these boys for one second. I told them to all come out and play baseball, play their game. Play the game they know how to play. They executed very well.”

Boron was missing junior Dylan Dadey and senior Jason Richardson, the Bobcats' second and fourth batters in the lineup.

Russell said he is uncertain when the two players will return.

Both teams have three games remaining in the regular season.

“I don’t know what it means,” Singer said. “We have Frazier Mountain this Friday. We cannot take them lightly. If we take them lightly, we will lose. But I feel that we have a pretty good chance at making the playoffs.”

Boron will host Frazier Mountain on Friday and play two games next week, the final week of the regular season, starting at first-place Bishop on Tuesday.

Rosamond will host Kern Valley on Friday, play at Desert on Tuesday and host second-place Mammoth on May 12 in the final day of the regular season.

“Take every team like they’re the No. 1 seed and full throttle all the way,” Day said.