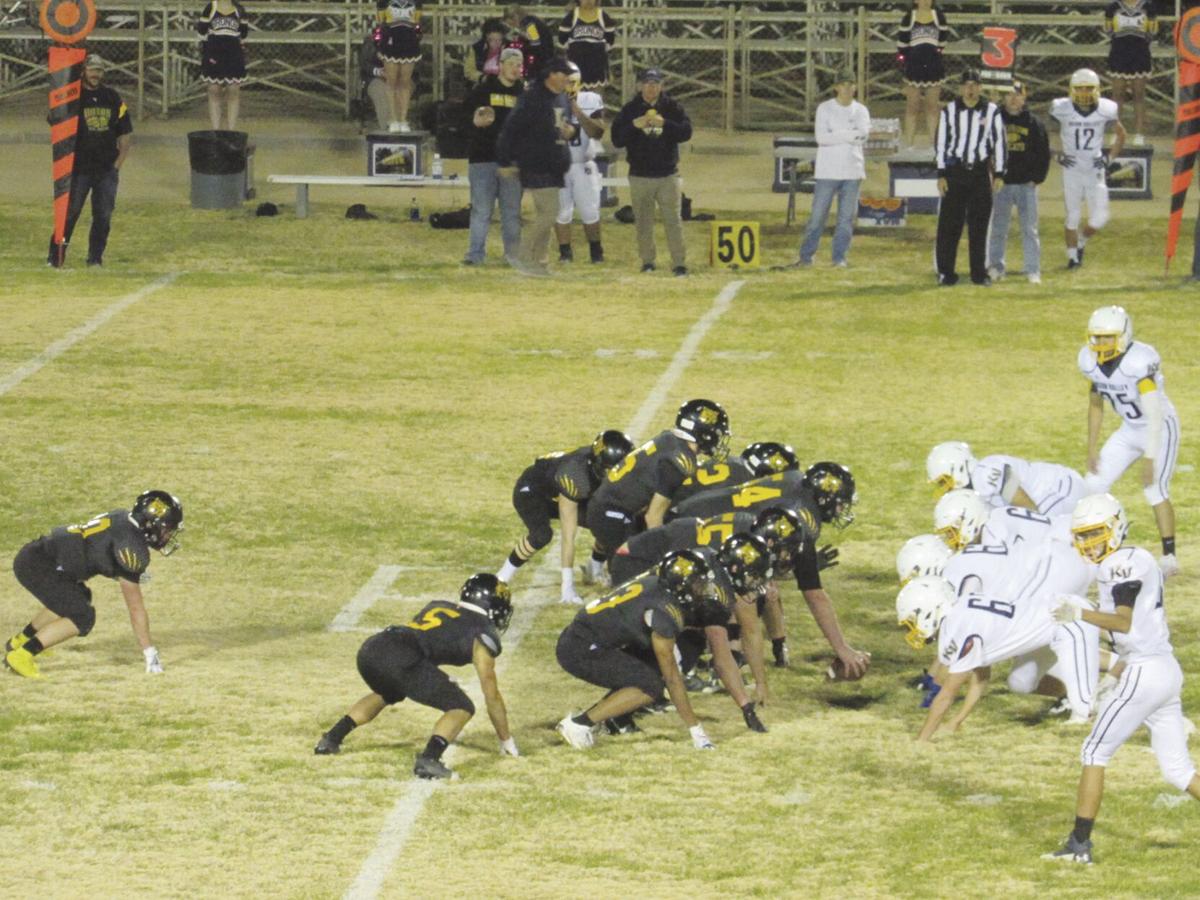 Boron quarterback Braeden Wolfe (15, center) sets up under center to take the snap against Kern Valley on Friday. The Bobcats routed the Broncs 54-6. 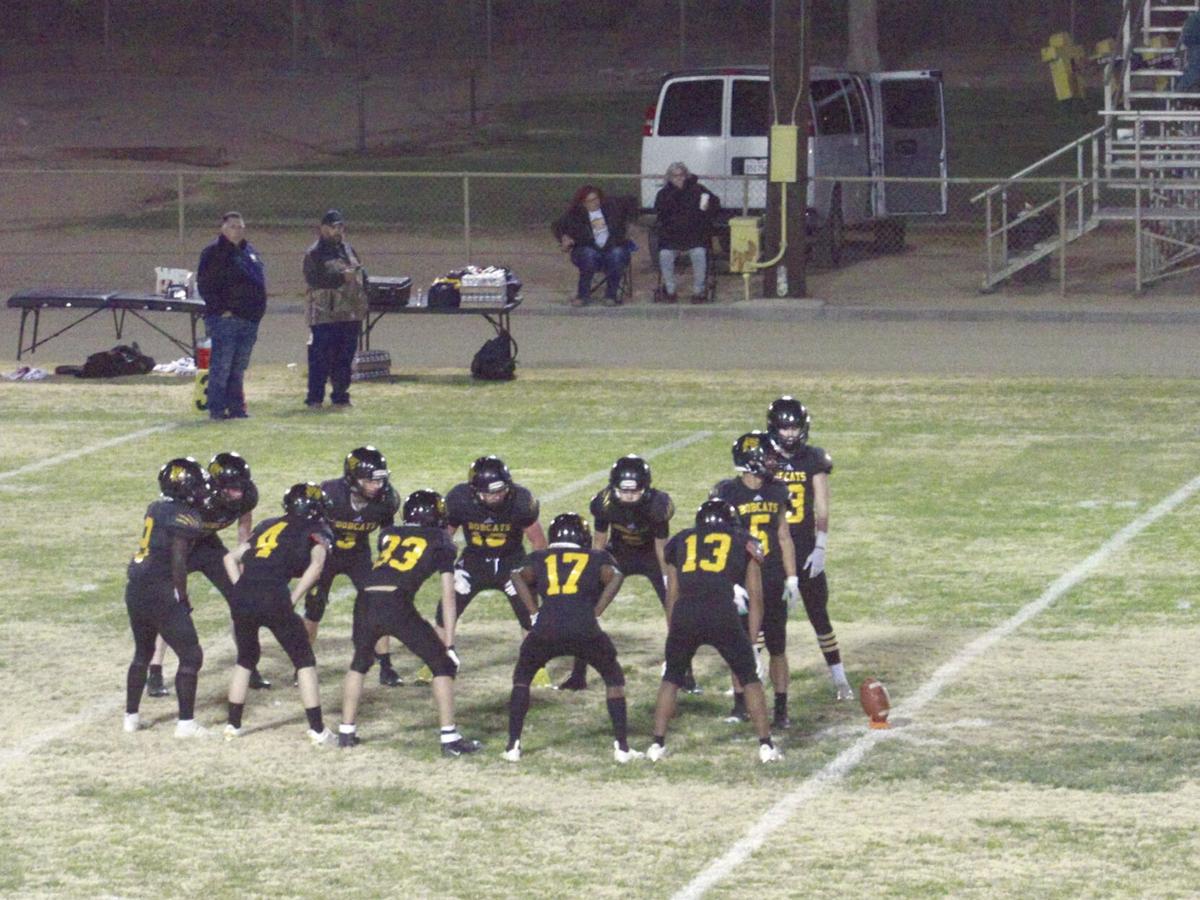 The Boron football special team gets set to kick off the ball to Kern Valley during Friday’s High Desert League game. The Bobcats won 54-6.

Boron quarterback Braeden Wolfe (15, center) sets up under center to take the snap against Kern Valley on Friday. The Bobcats routed the Broncs 54-6.

The Boron football special team gets set to kick off the ball to Kern Valley during Friday’s High Desert League game. The Bobcats won 54-6.

It was a total team, near-perfect effort by Boron, offensively, defensively, special teams, it didn’t matter.

The Bobcats racked up a total of 457 yards of offense and forced visiting Kern Valley into four turnovers, as they dismantled the Broncs for their second league victory of the season with a convincing 54-6 victory, Friday night on Homecoming Night at Boron High School.

Mykel McClendon was solid offensively and defensively as the senior tailback led Boron’s vaunted rushing attack with 231 yards on 15 carries and two touchdowns on runs of 52 and 55 yards. He also picked off Broncs quarterback Hunter Watts twice.

To put the icing on the cake, McClendon was named Homecoming king at halftime.

“We just wanted to not give up and keep pushing and tonight I thought we played great,” said McClendon. “We kept our heads on our shoulders and we just have to keep it up for next week (against Bishop). We executed what we needed to do, but I thought we could have scored a couple of more points.”

McClendon led the running back-by-committee, which combined for 428 rushing yards. Six different running backs scored at least one touchdown for the Bobcats (4-3, 2-0).

“Coming in, we knew we had six horses (in the stable) and we were going to utilize all six,” Boron head coach Michael Howard said. “We can really put any running back back there and be successful because our offensive line is something else. That’s our bread and butter.”

Boron punched the Broncs (3-2, 1-2) in the mouth early and often in the first quarter, including on its opening possession in which the Bobcats used a 10-play, 56-yard drive, which was capped by Rayden Singer’s 1-yard touchdown run.

On the Bobcats’ second possession following a turnover by Kern Valley, Boron promptly extended its lead three plays later after Wyatt Howard scooted his way into the end zone from 23 yards out for a 16-0 lead.

“I thought we executed well, but we shouldn’t have let them score,” Hiegel said. “We put in work during the week, and we did what we needed to do. I thought we gave 109 percent, that one percent was letting them score. I’m pleased with our effort defensively.”

Hiegel rushed for 62 yards on five carries and scored two touchdowns. Howard had 50 yards on seven carries and Isiah Morgan had 49 yards on eight carries.

“I thought we played well, but we still have a few things we need to correct. I’m definitely pleased with the victory,” Boron quarterback Braeden Wolfe said. “Our offensive line did an outstanding job, and our execution was really good. Obviously, the run is always the game plan, but we’re not afraid to throw the ball.”

The Bobcats scored on their first four possessions of the game. On their third possession, Hiegel scored his first touchdown of the game from 3 yards out and, following the two-point conversion, Boron led 24-0.

Things went from bad to worse for the Broncs in the second quarter. Already with a huge lead, McClendon scored his first touchdown of the game as he took the handoff from Wolfe and turned on the jets, sprinting 52 yards into the end zone for a 32-0 lead.

Boron’s three losses this season have come against teams with a combined 22-2 record. Things won’t get easier next week as it plays rival Bishop (7-1, 3-0), which could determine the league championship. In three league victories, the Broncos have outscored their opponents 182-6.

“Tonight, we executed offensively and defensively,” Howard said. We’re absolutely dialed in. We’re ready to make a run at this and hang banners. We’re zoned in for Bishop and the good thing is they are looking past us.”