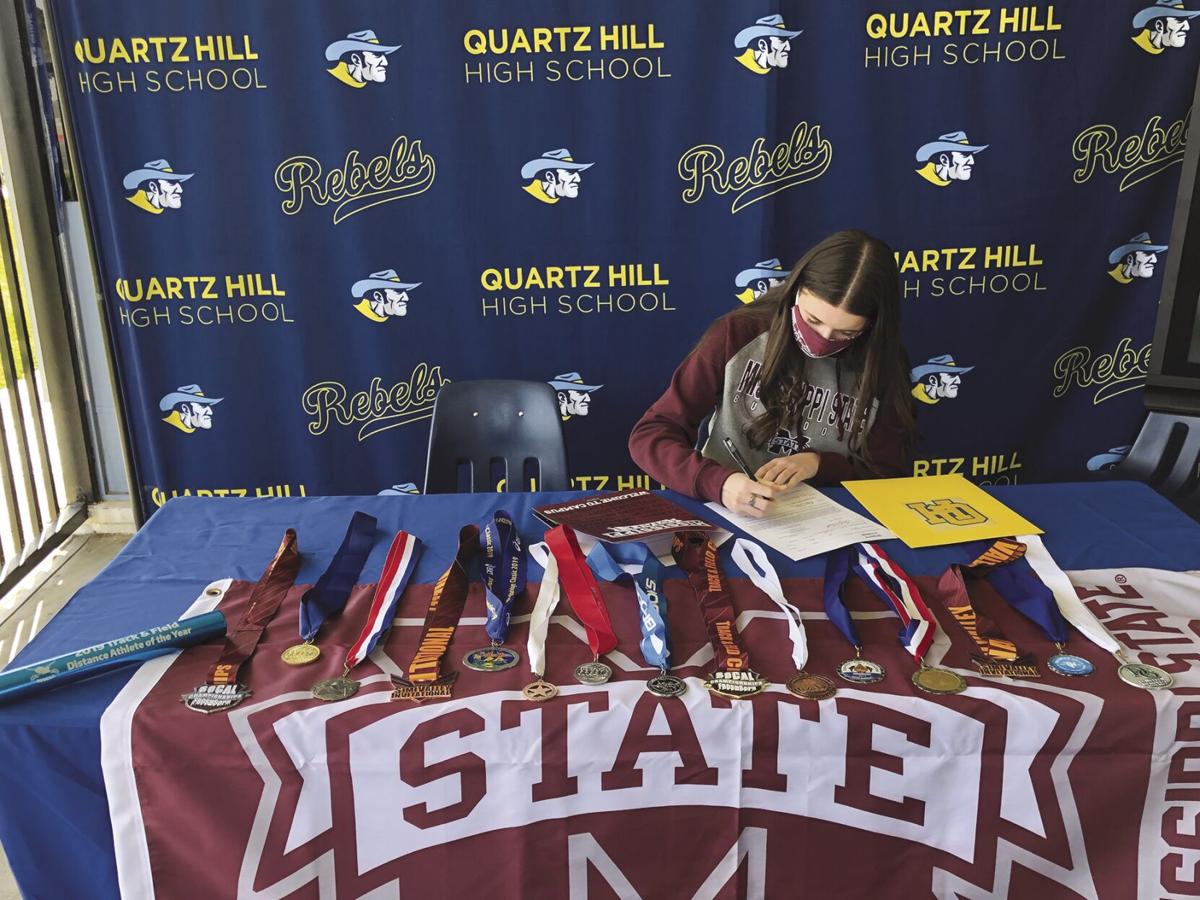 NEW BULLDOG — Quartz Hill senior Grace Ritchie signs her National Letter of Intent to run cross country and track at Mississippi State on Feb. 9. Ritchie, whose running medals are on display, plans on studying animal science to become a veterinarian. 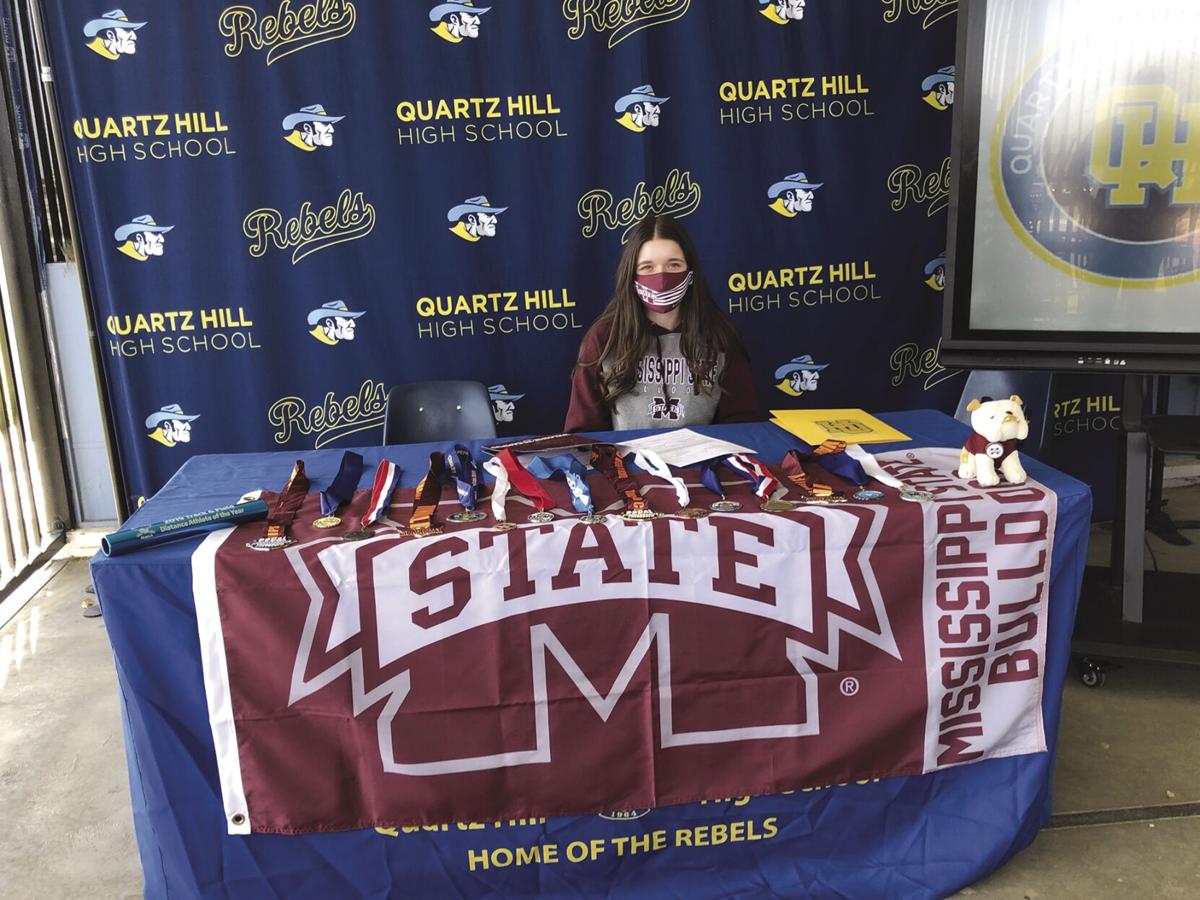 NEW BULLDOG — Quartz Hill senior Grace Ritchie signs her National Letter of Intent to run cross country and track at Mississippi State on Feb. 9. Ritchie, whose running medals are on display, plans on studying animal science to become a veterinarian.

QUARTZ HILL — Grace Ritchie had very specific goals of what she wanted to study in college in pursuit of her ultimate career.

Her goals, to study animal science and enter a pre-veterinary program, as well as her desire to continue her distance running, narrowed her college search considerably.

The Quartz Hill High senior found her match in Mississippi State, where she will be able to run cross country and track and study animal science. She signed a National Letter of Intent on Feb. 9.

“It’s really amazing to be able to do this right now, especially with COVID going on right now,” Grace said. “I’m glad I’m able to be here with some of my teammates and my family and coach and be able to sign with the people who have brought me through this journey through the past years.

“They had a really good animal science and pre-vet program, which is what I’m going to major in. After I looked at that, I looked at their athletics and it just looked like something that would help me improve my running the next four years.”

“Colleges that had the major she was looking for, she did OK,” Kathy Ritchie said. “She had a few close calls, but as soon as they went down, locked down for COVID, she spent a lot of time researching and she sent out letter after letter after letter. She did really well that way. She got quite a few coach calls, zoom calls and interviews with coaches. She just kept in touch with them. If she didn’t hear from them for a couple of weeks, she would just check in. Say ’This is what I’ve been doing for training,’ because coach kept them on a schedule. It was all about the communication and following through. The coaches were very responsive to that.”

But because Grace had a specific academic goal, one that not all colleges offer, it made it more difficult.

“It’s kind of a Catch-22,” Kathy Ritchie said. “You’d find a great school and they would contact her and were really interested in her, but they didn’t have the pre-vet. She turned a few down because of that. But the schools were supportive. It made the scope a little smaller, but it was always academics first and then she never found a bad running program at any college.”

Grace said she sent out 20 to 25 emails to different schools, including Mississippi State, when she began scouting colleges at the beginning of her junior year, before the start of the pandemic.

“(Mississippi State) emailed back and we kind of stayed in communication and kept talking and then it kind of went from there,” Grace said.

Grace and her parents were able to make a trip to the campus the first weekend of February, but she had already committed over the phone prior to their visit.

“My mom and dad and I just went there for tours and to see the campus and the city it was in,” Grace said. “That’s why we went out there, to visit, to see it.

“After constantly researching and looking at the website, I just knew it was right. I just wanted to go there.”

Grace said her choice came down to three colleges, including the University of Nebraska-Lincoln and University of Findlay in Ohio.

“It was very difficult to make the decision,” Grace said. “I’ve been wanting to become a veterinarian ever since I can remember. I’ve always loved animals and I want to continue my career with that.”

Kathy Ritchie said Grace grew up with only dogs and fish as pets.

“She did college tours and visited the animal science and did the tours of the agriculture departments and you wouldn’t know that she hadn’t been around cattle on a regular basis, because that’s just what she’s always wanted to do,” Kathy Ritchie said.

When Grace signed her Letter of Intent, the table she signed it on was adorned with an array of medals she won running for Quartz Hill High.

Grace was the Golden League champion in both the mile and two-mile her sophomore year on the track team, as well as being one of the top finishers on the Quartz Hill cross country team, which almost advanced to state last season. The cross country season will start on March 6, with three consecutive league duals.

“We’re going to miss her and it’s unfortunate we didn’t have the competitions the previous couple of seasons, but we do cherish the time we had with her,” Quartz Hill cross country coach Matt Bierowicz said. “Obviously she’s a tremendous leader and just great teammate. She cares about the girls on the team. Her work ethic, we’re really going to miss it.

“Last year, I have total confidence she would have been one of the top runners again and probably made it to CIF again as well. She was also part of a girls cross country team last season and they almost made it to state. She was integral. She was a scorer on the team, meaning she was top five. Just her leadership, hard work and camaraderie with her teammates, it’s all part of the package with her. She never misses a practice. Great attitude and communicates well.”

Grace ran track her freshman and sophomore years. There was one track meet at the beginning of the season last year before the rest of the season was canceled due to the Coronavirus.

She also played soccer for 12 years, including two years at Quartz Hill and five years on a club team.

Kathy Ritchie said Grace would be running after school before soccer practice and her weekend would consist of running meets and soccer tournaments.

“She just did this year round for five years,” Kathy Ritchie said. “So I got to put a lot of miles on the car with her, but I would do it all over again.”

Bierowicz coached Grace for four years, for both cross country and distances on the track team.

“It’s one of those kids you’re never going to forget, someone a coach really likes to coach,” Bierowicz said. “There were plenty of other runners and athletes during this period that struggled and kind of shut down. She just stayed the course. She has this goal. I want to run in college. I want to go to college and study this and she just does it.

“I know there were probably plenty of schools interested in her. She’s been consistent. It’s a shame, because this past track season and cross country season we’re kind of in the middle of right now, if her success would have continued and her time would have gotten faster, coaches would have a better idea of what she can do. I think she’s kind of an untapped resource, because when she goes to that school, the coach knows she’s a good runner, but I think she has that potential and I think she’ll do very well in college. It seems like it’s going to be great for her.”