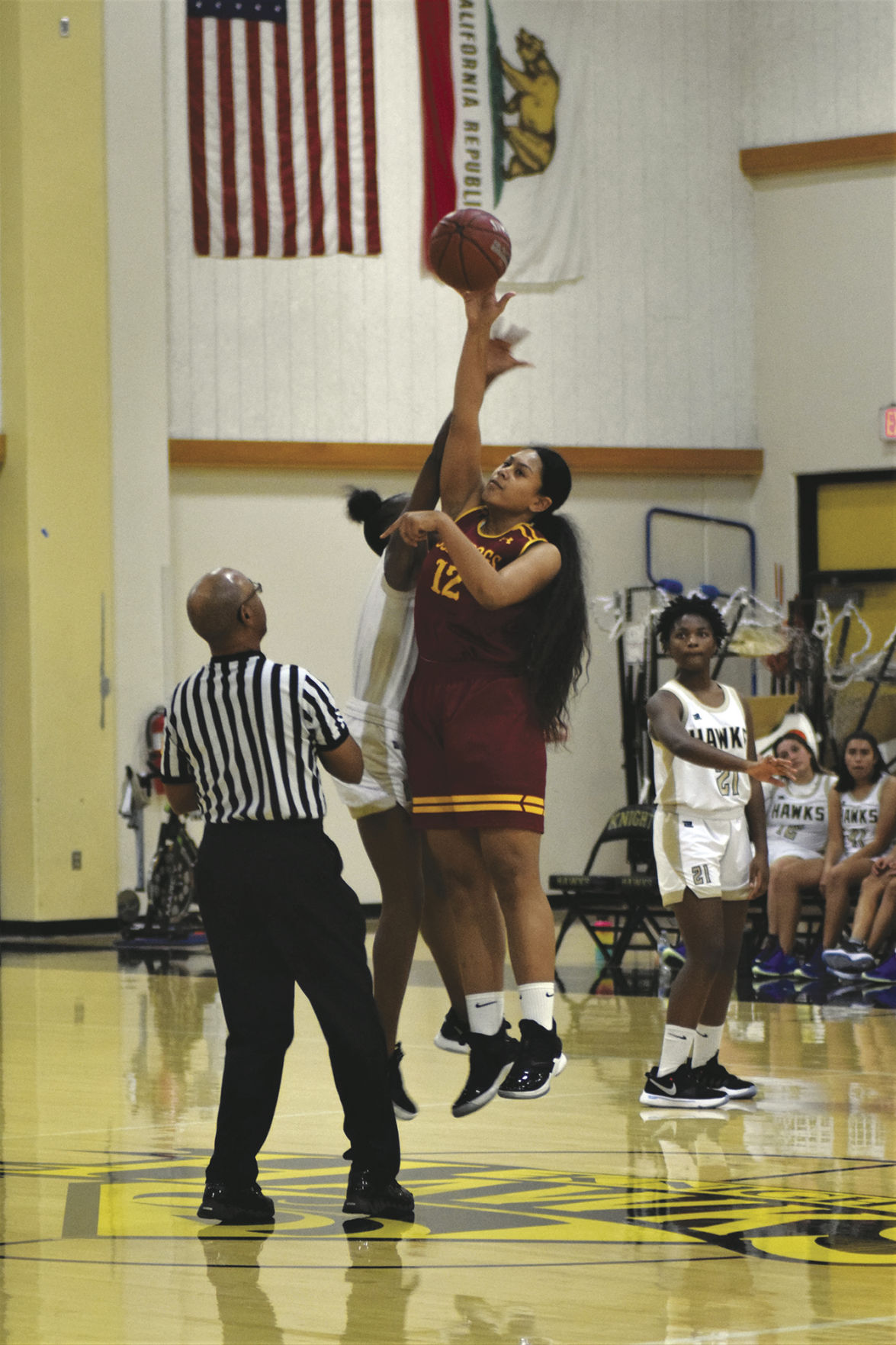 HIGHER JUMP — Highland’s Azha Dickson (12) gets her hand on the ball to win the jump ball against Knight’s Blessing McBride during Tuesday’s Golden League game. Dickson scored 18 points to lead the Bulldogs to a 45-33 victory. 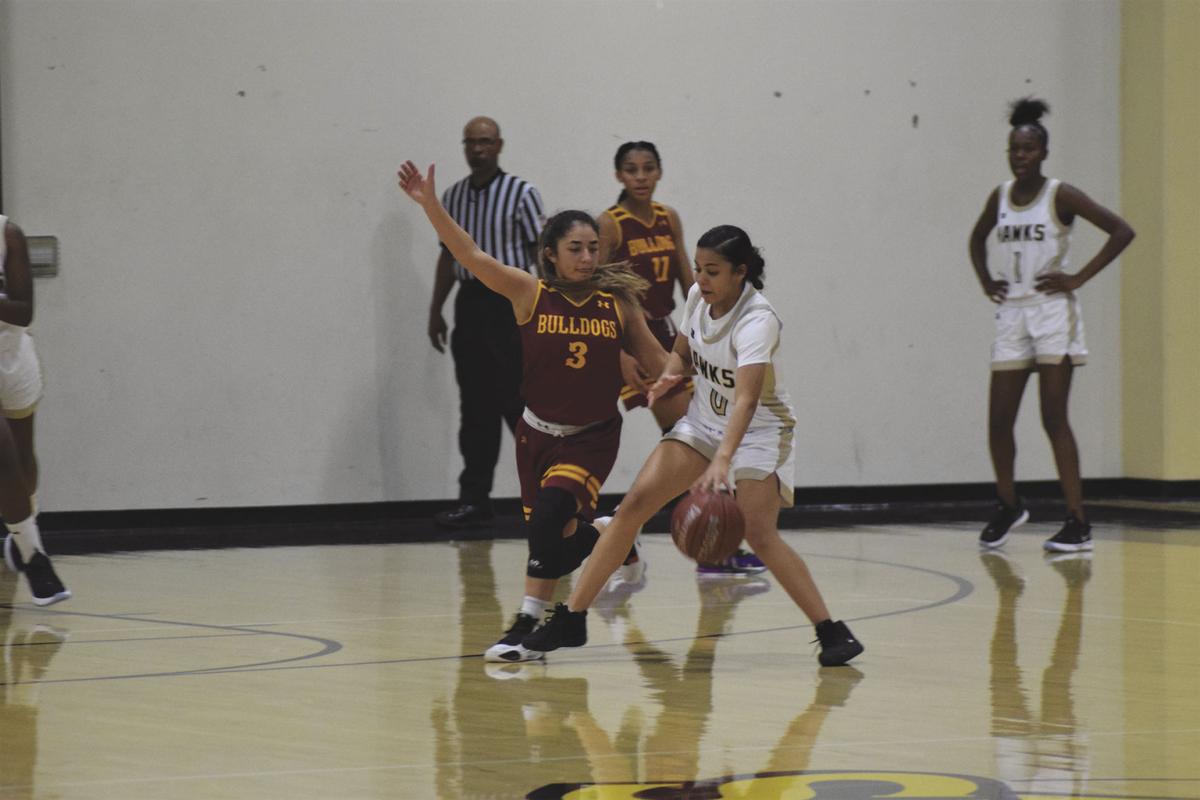 DEFENSE — Knight’s Bailey Cassell (0) tries to dribble the ball inside while Highland’s Kimberly Leon (3) defends on Tuesday. The Bulldogs won 45-33. 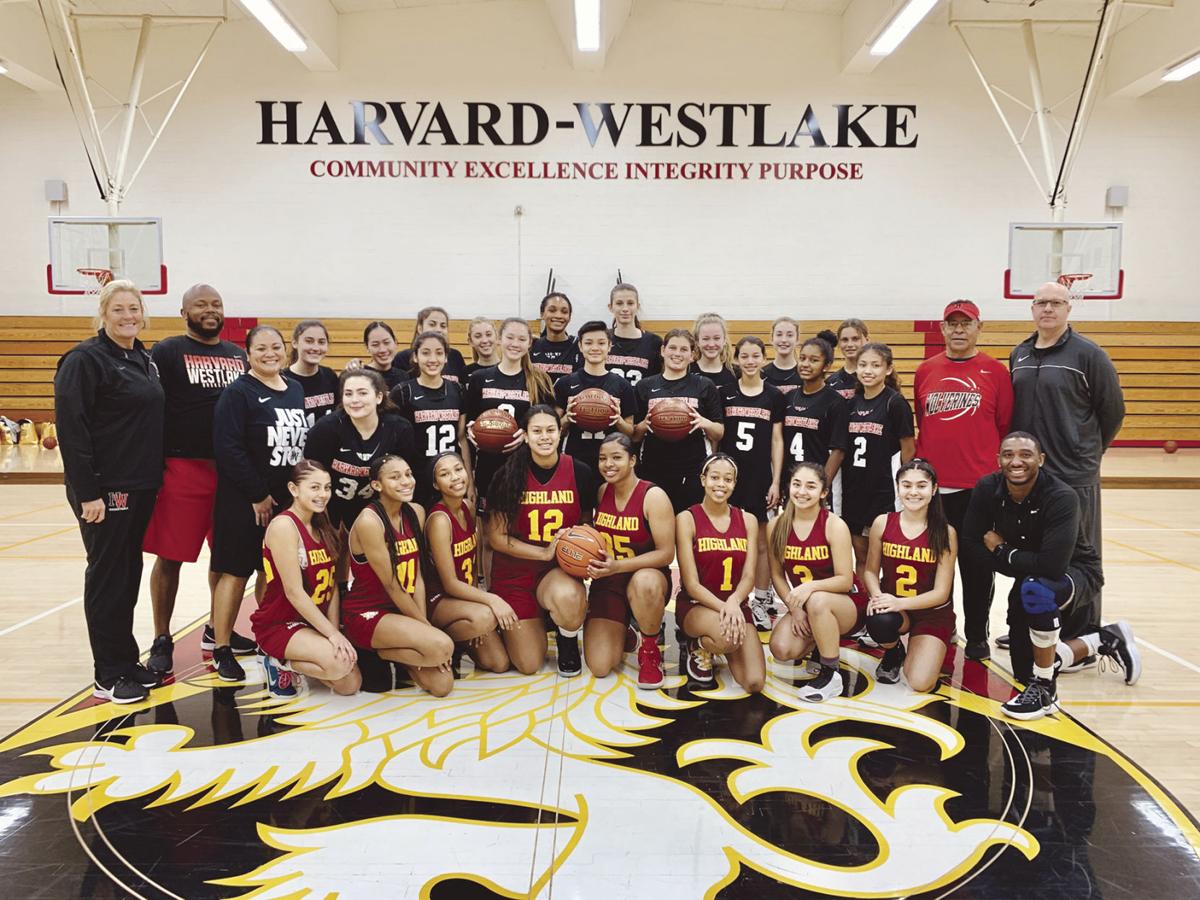 CAMARADERIE — The Highland girls basketball team and coaches pose with the Harvard-Westlake team and coaches after receiving new balls, uniforms, ball bags and warm-up suits from the Wolverines last week.

HIGHER JUMP — Highland’s Azha Dickson (12) gets her hand on the ball to win the jump ball against Knight’s Blessing McBride during Tuesday’s Golden League game. Dickson scored 18 points to lead the Bulldogs to a 45-33 victory.

DEFENSE — Knight’s Bailey Cassell (0) tries to dribble the ball inside while Highland’s Kimberly Leon (3) defends on Tuesday. The Bulldogs won 45-33.

CAMARADERIE — The Highland girls basketball team and coaches pose with the Harvard-Westlake team and coaches after receiving new balls, uniforms, ball bags and warm-up suits from the Wolverines last week.

PALMDALE — The Highland girls basketball team had been practicing passing and time management for their first Golden League game in almost a month.

The Bulldogs demonstrated they learned those skills in a 45-33 win at Knight High on Tuesday, executing offensively and outscoring the Hawks in three of the four quarters.

Highland (10-9, 6-1) takes over sole possession of second place in the Golden League and handed Knight (8-9, 5-1) its first loss in league, leaving Lancaster undefeated and alone in first place.

“It was just getting rebounds and pressuring the ball.”

Sisson said passing and time management was a focus in recent practices.

“A lot of our past games, we rush our shots a lot,” Sisson said. “So we worked on time of possession, making sure we keep the ball a little longer than the other team.

“So now we’ll be fighting for first place with Lancaster.”

Highland junior Azha Dickson scored 11 of her team’s 13 points in the first quarter, as the Bulldogs jumped out to an early 6-0 lead and responded when Knight took an 8-7 lead. Highland led 13-10 after the first quarter.

Dickson finished with a game-high 18 points.

“I think it was a team effort,” Dickson said. “I couldn’t do it without my teammates. We just stuck together and our passing was good. We work hard in the gym every day, so I believe that we deserved to win.”

Both teams scored 10 points in the second quarter, as Highland led 23-20 at halftime.

The Bulldogs took control in the third, outscoring the Hawks 12-6, and built a 10-point lead, 33-23, with one minute and 10 seconds remaining in the third.

Highland sophomore Eriel Banks scored eight of her 14 points in the third quarter.

“To be honest, I feel really good,” Banks said. “In the second half we really brought ourselves together as a team.

“Time management, usually in our games we have trouble with that, but we’ve been working on it. We just need to work on running the clock down and that’s what we did in this game. We worked more on passing instead of dribbling the ball all the time. It’s actually working and we need to do it more often, because that’s how we’re going to get the win.”

“They were undefeated and we just need to come for Lancaster so we can tie for league. That’s our goal,” Banks said.

Highland will host Littlerock on Thursday.

Knight seniors Bailey Cassell and Keyna Hadley both finished with 11 points apiece for the Hawks.

“It’s a pretty tough loss,” Hadley said. “We turned the ball over a lot. I don’t think our heads were really in the game. We spent too much time worrying about a missed ball or a missed shot or a turnover, instead of just moving on to the next play.

“We probably just met our match. Just trying to pick up where we left off in December. We’re a little rusty, but we’re still trying to find ourselves and get our heads back into the game.”

“Defensively I thought we played OK,” Knight coach Shawn Johnson said. “I would give us a C on defense and an F on offense. (Highland) was more effective offensively. Highland deserved to win. Highland played well. They executed on offense much better than we did.

“I think part of it is we got behind and got a little frustrated, just with how we were playing. They get disappointed that their shot is not going in and then it kind of becomes a domino effect. Then they start pushing a little bit too much. We can’t question our hustle or our effort. That was there. We had good hustle and good effort. We just couldn’t make a shot tonight.”

Knight plays at Palmdale on Thursday and will host first-place Lancaster on Tuesday.

Both the Knight boys and girls basketball teams were treated to an event with Knight graduate Paul George, sponsored by Nike and Gatorade on Jan. 7.

It started in the Knight High team room where the players were given backpacks with t-shirts, shorts and towels.

The players were put on a charter bus to Griffith Park and put through a workout by personal trainers.

The players were then taken to an auditorium, given VIP passes and played George’s basketball video game.

George arrived and played video games with the players, before taking part in a question and answer session with them.

“It was cool,” Johnson said. “He treated them like gold. It was awesome.”

“I told the kids that it was a two-day event and he was there for one hour and it was the hour you were there,” Johnson said.

The Highland girls received equipment donations from the Harvard-Westlake girls basketball team, which raises money every year to donate to a designated team.

“It’s good to see teams raise money and help the less fortunate kids of other programs,” Sisson said. “We’d like to thank them from the bottom of our hearts.”