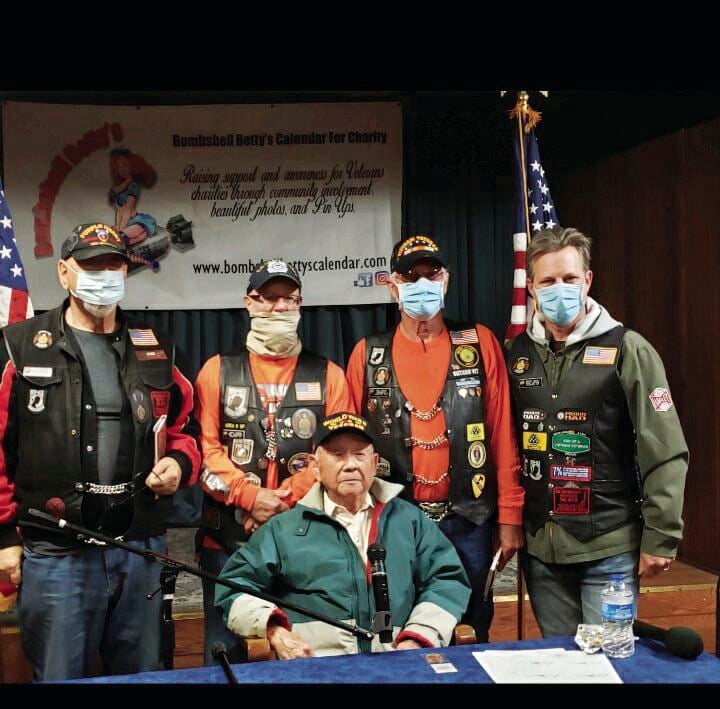 Lou Moore (front, center) is surrounded by American Legion Riders who gathered Sunday to hear the vet talk about his book. 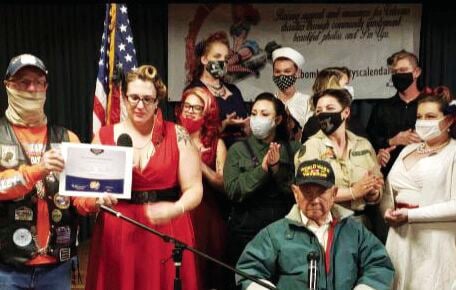 A Legion Rider (left) and members of the Bombshell Betties posed for photos with Moore.

Lou Moore (front, center) is surrounded by American Legion Riders who gathered Sunday to hear the vet talk about his book.

A Legion Rider (left) and members of the Bombshell Betties posed for photos with Moore.

LANCASTER — More than 75 years after World War II brought an Army veteran and his beloved wife together for a marriage that would last nearly that many years, vets, family and friends gathered Sunday to hear that vet tell his story of his homecoming and his “Eternal Love.”

Former Army Sgt. Lou Moore, 98, completed his autobiographical story early this year, just a couple months after his wife of 74 years died, amid the pandemic year of 2020.

“I started writing the book shortly before she passed and I hoped to be able to read it to her aloud, but that was not to be,” Moore noted at a book signing event Sunday hosted at American Legion Post 311.

The author of “Eternal Love — The True Love Story of Nellie and Lou Moore” stood outside of the Legion post, waiting, as a motorcycle honor guard from the American Legion Riders rumbled up.

Next, like a general on a reviewing stand, Moore was honored with a salute to the colors posted by the Young Marines of the Antelope Valley, a scouting-type group of teens who learn military drill and ceremony.

“This is hard to believe,” Moore, who saluted right back, said.

Armed with a microphone, he led the group of several dozen admirers in the “Pledge of Allegiance.”

“It is hard to believe all these people would come here to support me and to support my Nellie,” he said.

Nellie Moore died on Oct. 17, 2020, as her husband was sharing dictation for the book with Stacey Alvey, a family friend who helped him edit it.

Veteran supporters who made the weekend event possible with weeks of planning, included the local nonprofit, Bombshell Betty’s Calendar for Charity and the American Legion. Coffee4Vets, Vets4Veterans and Blue Star Mothers volunteers and supporters also helped out.

“Lou is a wonderful man and we were so happy to be able to do this,” Donna Carrion said.

She worked with another Bombshell Betty, Cheyanne Anderson-Hess in planning and they were assisted by Dave Corbin of Legion Post 311, who also serves as the area president of the American Legion Riders.

They all wanted to help a veteran who had a life story worth telling.

“I want to share my story because I am 98 years old and time is off the essence,” Moore said.

A third-generation Chinese-American, he joined the Army soon after the attack by Japan on the US Naval Fleet at Pearl Harbor. An accident in flight training shifted him into the ground forces and he served in the European Theater of Operations until war’s end.

His non-Chinese name resulted from an immigration official who could not pronounce his grandfather’s name, and so, changed it to Moore.

As World War II began for America, he became one more of the 16 million who served in the US military.

“War is brutal,” he said. “It is kill or be killed, and I am here today because the Germans were such lousy shots.”

History might disagree about German marksmanship, but Moore adds, “I am just lucky that I got to come home without a scratch.”

“There is nothing good about war,” he said. “Maybe only one thing. My Nellie told me, ‘Without the war, I would not have met you.’ ”

With that, he wanted to concentrate on the subject matter of his book. Moore explained how he met and fell in love with his wife soon after his release from the Army at the end of World War II.

He said a family outing to a popular New York nightspot, the China Doll Nightclub gave him his first sighting of Nellie, a young beauty in the chorus line.

He was captivated by her beauty, but more than that, he believed her goodness out-shined even her beauty.

“Finally, after weeks, I looked through the open window of a luncheonette and I saw her sitting there,” he said. “I gathered up my courage and asked, ‘May I sit with you?’ And she said, ‘Of course.’ Which was a beautiful thing to say.”

Her arrival in New York was a tragic and dramatic as all events connected to history’s greatest conflict. Nellie (Hatsumi Mayeda) Moore originally hailed from Visalia, in California’s Central Valley.

She was among the Japanese-Americans crowded into captivity at relocation centers after the Pearl Harbor attack because of unfounded fears that people of Japanese ancestry represented a security or loyalty risk.

“Really, they were concentration camps with concertina wire and guards that would shoot if you went near or outside the wire,” Moore said.

He recalled that his match with Nellie even faced prejudice within his own family, with his mother refusing to accept a Japanese-American daughter into a Chinese-American family.

“We had just fought a war among all our nations,” he said.

None of that stopped him from courting Nellie. He proposed after nine days and after 10 days, they were married.

“We took the train to Baltimore together because in New York you had to wait,” he said. “In Baltimore, you could get married the same day.”

The whirlwind courtship gave way to a marriage of 74 years, in which Lou and Nellie overcame financial challenges after the war. With her loving support, he was able to become a success in business and together, they were able to achieve their potential and by great measure, “the American dream.”

Along the way, they made a decades-long friendship with another World War II veteran, Ernest Borgnine, who went on to Academy Award fame as starred in the WWII comedy TV hit, “McHale’s Navy.”

It is all in the book, a brief memoir, which was recently reviewed as the “Top Japanese-American Biography on Amazon books.”

“I really wrote this book for husbands,” the elder veteran said. “I wrote it so they will realize that the wife is the source of their success. And they have a duty to love and to cherish her. Women are to be respected.

Men need to understand that their marriage is a commitment to the wife and their responsibility is to love and to cherish.”

At the beginning of his Legion Post conversation, he asked, “How many men in this room are married? If yes, please stand up.”

Next, he asked, “How many are here with your wives?”

Each time, several got to their feet and finally he asked, “And how many of you have said today, ‘I love you, dearly!’”

Everyone laughed, and then, he said, “That is why we are here!”

Groups from the Legion and Bombshell Betty posed for photographs with the nonagenarian veteran and first-time author. His family with nieces, grand- and great-grandchildren all showed up for family photos.

“It was a wonderful event,” Bombshell spokesperson Carrion said. Anderson-Hess noted that all the signed books sold out, raising funds for veterans and getting Moore’s story shared widely.

Much more than book profits, he said that at 98, he believes his mission is to spread the word that love can be an ideal that is realized in life and beyond.

“When I am gone, I want our ashes to be combined together, so that we are truly together in eternity,” he said.