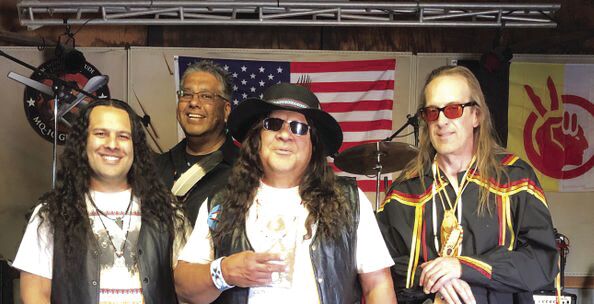 In the current time we are living through, messages of unity can be in short supply.  But Blue Mountain Tribe, a local band from Tehachapi, is getting that message out though their latest single, “Pray For Our Planet.”

The band is: Vocalist Robin Hairston, his son Caleb Hairston on guitar, Pat Mata on drums and Jeff Cooper on bass. I caught up with singer Robin Hairston to learn about the origin and creation of this song.

Jesse Davidson: Can you give us a bit of back-story on how “Pray For Our Planet” came about?

Robin Hairston: We were sent a memo by Chief Arvol Looking Horse. He is the most respected chief in the world. He said to us, “Can you pray for our planet with all the sickness and violence going on in the world?” We decided to go into the studio and write a song about it. Our producer of the song and video is Michael Altman. He wrote the theme song for M*A*S*H (Altman penned the lyrics. Johnny Mandel wrote the music). His father was the director of the show, Robert Altman. He paid for us to record at Cherokee Studios in Hollywood. All the big names go there to record. He paid for everything because he believed in our cause. We didn’t have the money to do this big endeavor. The video, recording and everything else. Bruce Robb (John Mellencamp, Dr. John, Harry Nilsson) is the owner of Cherokee Studios, who also recorded and engineered the song. He loved the song so much, he asked if he could play keys. I said, “What?! Of course you can play!” It really made the song because he is a famous Hammond organ player if you research everything he’s done.

JD: That’s great. How did you and Michael Altman meet?

RH: He lives in Tehachapi up in the top of the mountains. Really secluded. I went up there to get firewood from him because he’s got a lot of land. At first, I didn’t know who he was. We became close friends. We would barbecue together and things like that. I was explaining to him that we were being asked by high ranking Native American leadership to do this song about what’s going on in our country and I didn’t have the money. He said, “Don’t worry about it Robin, I’ll take care of it.” When we released the song and music video, we credited Michael as the producer. His brother, camera operator/cinematographer Robert Reed Altman (Cloverfield, Bones, 3 Days To Kill), directed and filmed it. Someone asked me, who was familiar with M*A*S*H, asked if I knew who Michael Altman was? I said, “Well no, he’s a good friend of mine.” They said to Google him and I was blown away. He never told me in our friendship he co-wrote the theme song or that his father was the director. He’s a very humble man that loves the Indian culture and our traditions.

In the video, all the sites were filmed in Tehachapi. The lake, the concrete plant, the mountains. We look at Tehachapi as a sacred city and site. I’ve had medicine men come up here and tell me, “Robin Redfeather, this is sacred land.” That’s why we wanted to make a point to film here.

JD: The video definitely ties that message into the song. Especially with everything happening currently.

RH: Yeah. Blue Mountain Tribe are also very strong activists against Native American suicide. We wrote our song “Children on the Rez” because the suicide rate of youth on reservations is off the chart. I’m also a 20 year veteran. Ten years in the Marine Corps and 10 years in the Army. So we support our veterans. We don’t do this for the money. We don’t get paid hardly any money. We donate all our proceeds to helping people in these various causes. That’s what were about. Helping the people.

JD: What are your plans for this year?

RH: We’re working on our second album. It’s going to be all Blues Rock. We’re hoping this pandemic dies and we can get out there to tour and play some shows. We don’t want to have them on Zoom like everyone is experiencing. We’re writing a whole new album and writing the songs as we speak.

For more info on the band and to hear “Pray For Our Planet,” check out bluemountaintribe.com

Visit https://youtu.be/nmOXwdkcTsk to see the video for the single.