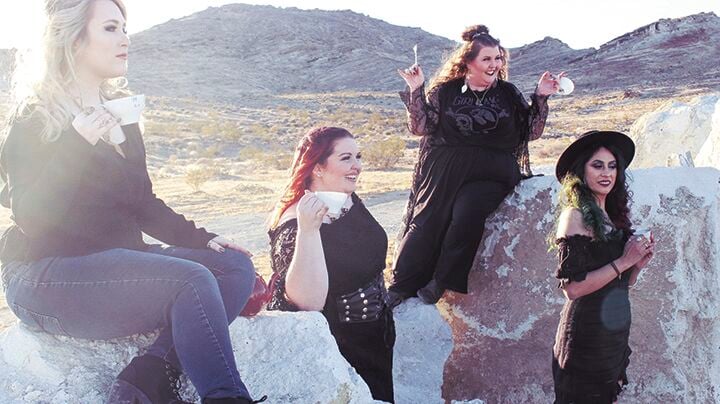 After a year-and-a-half in the making, a new collaboration amongst female songwriters in our community, has finally come to fruition. Siren Valley, a singer-songwriter group consisting of Amy Bullock and Katelyn Shay on vocals, has teamed up with solo artist Janell Crampton and Westbound 66 vocalist Tina Guzman, for a brand new song/video called, “Behave.”

It’s being released on March 8, in time for Women’s History Month. I caught up with Janell and Tina to learn more.

Jesse Davidson: How did you both become involved in the project?

Janell Crampton: Amy got an idea for this song about women and immediately, she wanted other female songwriters apart of it. It came from this little quote she saw that said, “God, put your arm around my shoulders and your hand across my mouth.” This song is about breaking the norms of what women are expected to do. We ended up working with Tina Guzman, who is really great and such a sweetheart. This all happened during COVID, so most of it was done virtually. Amy and Kris Danam were together and I came in virtually with them. He’d play the chords and I’d have myself muted and I would try to play along. Eventually, we had this idea where I would take the rhythm guitar parts. Kris is such an insane guitarist that took over on the lead guitar. We started getting a bunch of ideas from things he added in there.

Tina Guzman: They were looking for a fourth voice. I think her words were “a strong, female voice” and that I came to mind. I was blown away to be asked. It was such an honor to be apart of this fantastic song. It just has such a strength to it. I think Amy intended this song to be empowering for women in music, but I feel the lyrics speak to every woman. Not being shy or quiet about who you are.

JD: Was it a challenge to write over Zoom? How did the song come together?

TG: Amy wanted Janell and I to feel welcome to put our stamp on it like a true collaboration. When we were working on the bridge of the song, I even said that I could sing a line in Spanish since I am Hispanic and proudly so. Amy was super excited and loved the idea, if I could figure it out. Luckily, I did and it’s a nice little touch thrown in there.

JC: At first, it was a little weird because we were just getting our feet wet with the process of it. Eventually, we started meeting with just the instruments in person. Then, the ladies would Zoom in and just sing along. Amy had all the lyrics and Kris had the chords. Once we got to the bridge, we came up with a different idea and I changed some of the chord progressions and it ended up flowing really cool into the final chorus. It was really fun collaborating with them and utilizing all of our different strengths.

Typically, I’m always into harmonies. Amy knew she wanted four-part harmony on this song. With the four of us, we had one rehearsal in person where actually worked on those together. Everything else, I’d record parts on my time and send them tracks. Eventually, we got to the studio and laid it all together.

JD: That’s great. Speaking of the studio, can you tell us about the recording process?

JC: It was with Diego Hodge at Valley Crest Studios in Leona Valley. I love working with him at his studio. He’s such a knowledgeable person to work with and overall, really sweet and just pleasant to be around. We met up on a weekend and recorded in two days. As we layered the harmonies, Diego had a few suggestions and he’d come up with something that made everything blend even better.

JD: Lastly, how do you hope this song will inspire women in our community?

JC: I just feel like I don’t see a ton of women out here. I hope this opens up more opportunities where people will try to reach out to more women. When you put them all together, we can really get some cool stuff done. I hope that I can continue to write things that encourage that change in the world.

TG: I’ve seen a lot of my friends that go to shows, support a lot of bands but aren’t necessarily active themselves. They talk about how they want to share their poetry, spoken word or music. I really hope this helps give them that push. I’d love to see more people come out of their shell to do what makes them happy.