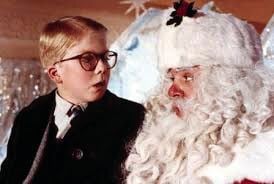 Ralphie sits on Santa’s lap as he prepares to ask him for a Red Ryder BB gun. 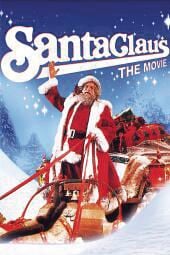 Ralphie sits on Santa’s lap as he prepares to ask him for a Red Ryder BB gun.

Did you get enough holiday cheer leading up to the big day? In case you didn’t here’s a list of the top 25 Christmas movies of all time, according to Good Housekeeping magazine. Who says Christmas movies are just for Christmas? You can spread the cheer throughout the season.

There’s a reason why TBS plays A Christmas Story for 24 hours straight every Christmas. This classic gave us the infamous leg lamp and Red Ryder BB guns — and most importantly, it taught us to never lick a frozen pole.

Even though this movie only came out in 2003, its tale of a human man raised as an elf making his way in New York City has quickly become a holiday classic.

Do you dread having your in-laws visit for the holidays? Watching this Chevy Chase movie will make anything your family does at Christmas seem totally normal in comparison.

Starring Kurt Russell as Santa Claus, this jolly Netflix original film follows two children who encounter Santa in their own home — and find themselves on a magical adventure to help him save Christmas.

6. Christmas with the Kranks

In the mood for some light-hearted holiday comedy? This holiday flick follows a couple, played by Tim Allen and Jamie Lee Curtis, who anger their neighbors by planning to skip Christmas in favor of a Caribbean cruise trip.

In this 2019 holiday rom-com, Game of Thrones’ Emilia Clarke plays a Christmas store shop girl who meets charming Tom, played by Henry Golding. Cue the romance — and a major plot twist at the end!

This Netflix original about a postman who befriends a reclusive toymaker makes for a great family Christmas film — especially with the beautiful animation that will leave you really feeling the holiday magic.

Thirty years have passed since most-watched Christmas movie Home Alone earned $285 million at the box office, but we still love watching 8-year-old Kevin McCallister plot and scheme his way out of a home burglary.

Kevin McCallister’s family manages to leave him behind yet again in Home Alone 2 ... and this time around he ends up in New York City, where he manages to outwit the Wet Bandits once more.

When a divorced businessman (Tim Allen) accidentally kills Santa, he must take over the role in this 1994 movie.

If you loved the first Santa Clause movie, be sure to watch the heartwarming sequel which this time has Santa looking for a Mrs. Claus.

This 1946 Frank Capra film isn’t just one of the best Christmas movies of all time — it’s one of the best movies in general. It’s a Wonderful Life was nominated for six Academy Awards and ranks #11 on the American Film Institute’s original list of the 100 Greatest American Films of All Time.

A Christmas Prince packs in every rom-com cliche you can think of into 90 minutes — and that’s exactly what makes it so delicious to watch. When a journalist is assigned to cover the handsome but mysterious prince of a small country named Aldovia, she gets more than she bargained for (of course).

Danny Glover is a retired widower who only wants one thing for Christmas: His grown children and their families to get along for the holidays.

Looking for something to watch after the little ones go to bed? You’ll love this hilarious holiday comedy, which is the third installment of the Harold & Kumar series.

In this heartwarming rom-com drama, Queen Latifah plays a small-town saleswoman who spends her life savings on a holiday trip to Europe after finding out she has a terminal illness ... except there’s a twist.

19. The Nightmare Before Christmas

Is it a Christmas movie? Is it a Halloween movie? Tim Burton blends both holidays together in a way that’s both spooky and heartwarming all at the same time.

A magical fantasy drama that the whole family can enjoy, Prancer follows a little girl who finds a hurt reindeer in the woods, whom she believes to be none other than Santa’s Prancer.

In this timeless cartoon, Charlie Brown seeks out the true meaning of Christmas with the help of his friends, his dog and one tiny Christmas tree. Take note: The Charlie Brown holiday films will be exclusively streaming on AppleTV+ this year.

A single woman (Emma Roberts) decides that she’s had enough of her mother’s attempts to set her up, so she recruits a “holidate” — a platonic plus-one to join her at every holiday gathering. In true rom-com fashion, things don’t stay platonic for long, though.

A sequel to 1999’s The Best Man, director Malcom D. Lee reunites the original cast, including Taye Diggs and Terrence Howard, for a holiday-themed comedy.

Funny men John Candy and Steve Martin team up for a classic holiday tale gone awry in Planes, Trains, and Automobiles. Released in 1987, this film features these two comedians at their best: as rivals trapped in the car on their way home for the holidays.

A Santa Claus origin story, this 1985 film stars Dudley Moore as an enterprising elf and John Lithgow as a sinister toy manufacturer.