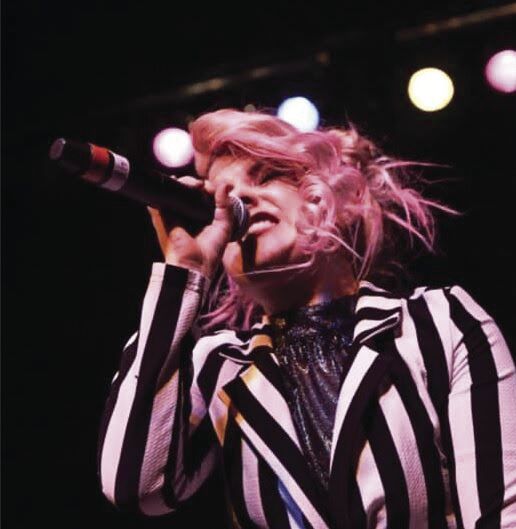 Kristen Dinsmore, better known as “Dinzy,” is a rising talent in the Rock world with roots in the high desert.

Kristen Dinsmore, better known as “Dinzy,” is a rising talent in the Rock world with roots in the high desert.

This past week while in Nashville and arranged via a mutual friend, I had a conversation with Kristen Dinsmore, better known as “Dinzy.”

She is a rising talent in the Rock world with roots in the high desert. She is currently singing with the ’80s group Bow Wow Wow and releasing music as a solo artist.

Jesse Davidson: Tell me about your Antelope Valley origins. How did you get started in singing?

Dinzy: I grew up in east Palmdale. I loved singing, being a ham as a child and dreamed of being on the radio. I joined the choir at St. Mary’s and then quickly started performing in school plays and community theater around the AV. I started taking private vocal lessons and was given different songs to practice. It was at the age of 15 where I realized my true love of Rock and Roll. I was extremely enamored with the band No Doubt. I knew that I wanted to front a band and tour the world. Ever so   ambitious, I started writing with friends, cousins, pretty much anyone who wanted to write or play with me while I continued school and theatre.

JD: That’s great. I was reading your bio and saw you’ve relocated to Nashville. What was the journey like from the AV to there?

D: I moved to LA when I was 19 and I started my first band, Bourbon Rose. We entered the Sunset Strip, frequenting the Whisky A Go Go. After studying recording engineering, Pop/Rock performance programs at Citrus College, I had a gut feeling that I needed to make a huge move to Nashville, Tenn. It was a thrilling decision having never been to Nashville, but I knew that there had to be more opportunity for my musical career and luckily, I was right. I jumped in my blue Mustang with my best friend Melody. We drove cross country with my cat in the back seat. We took our time and even made our way to New Orleans, but I would have to say the best part was catching a last-minute Aerosmith concert in Dallas. After moving, Bourbon Rose drifted and I became Dinzy, after my last name. I write with different musicians from all over Nashville and also play live with revolving musicians.

JD: How did you ended up singing in Bow Wow Wow?

D: I was recommended by a fellow artist and friend fronting the Nashville woman rock scene, who is a total bad ass. Susan Hyatt of the band Pillbox had been touring all of her life and knew I had been dying for a shot at my first tour. So, she put in good word for me. Leigh Gorman, the original member of Bow Wow Wow, took a chance on me from across the country, having never met me. We had one rehearsal in LA in December 2019, where everyone in the band met for the first time. A few days later, we set off on the Totally 80s Winter tour with When in Rome II and The Motels. I honestly had the time of my life and I would do it again in a heartbeat. I am so happy that I made long-lasting friendships with the musicians. Bow Wow Wow will hopefully announce shows in the near future. We cannot wait to reunite and finish our last two shows of the tour in LA as we, unfortunately, did not get the chance to do, due to COVID.

JD: I was listening to your song, “Turn My Mind Off.” There is a theme of overcoming internal and external stress. How you manage anxiety and turn off stress in your life?

D: I would say I write to manage stress and anxiety. My first album was written in a rage and I’ll take that. Most of my songs and lyrics come spewing out when I am going through something really upsetting or gut-wrenching. Usually, it starts with me writing in my journal and then a little later, I’ve got a song on my hands. I don’t find myself with too much to say when everything is going great, so I welcome the chaos and even the heartbreak because it gives me music.

JD: What are your future artistic goals?

D: I am currently writing my second studio album, writing with a handful of good friends/musicians and recording at a few different studios. So it’s been a really exciting melting pot of stellar creative forces for this next album. I am also excited to release a new single Thursday, June 17, a shot-rocking hard cover of Demi Lovato’s “Sorry Not Sorry,” available on all music platforms, which will be followed by the music video to be released shortly after.